Wally Kowal, at 92, still rides a bicycle – both for joy and to stay in shape. He tries to drink one beer, and one beer only, every day, preferably with dinner, which he sees as a kind of elixir.

If he seems young, Wally said, maybe that's why.

Friday, on a September morning cool enough for him to wear a windbreaker and a red buttoned vest, he and his grandson Greg met us at Canalside for a cup of coffee. We took them for a ride into the old First Ward, to some paths that wound through tall grass toward the Buffalo River.

The paths were formed by chunks of stone and gravel, but Wally – in black shoes with thick rubber soles – was unperturbed.

"This used to be all docks," Wally said, as if he saw it right now. He weighs 140 pounds and walks like a man who could be many years younger. He surged ahead, drawn as if by some unseen magnet, until he stood on the bank and looked across the water at the towering grain elevator once known as Concrete-Central.

Long ago, it was the home of Continental Grain. Wally worked there for decades; at one time, it was the largest grain elevator in the world.

Greg, at 22, knew exactly what would happen once Wally saw the elevator. The grandson had witnessed the reaction before, when he drove with his grandfather across the Skyway and the view caused Wally to erupt into visions of Buffalo as it was, the era when the city was among the great shipping ports on the Great Lakes.

"He's more of a friend than a grandpa," Greg said, an extraordinary compliment that bridges a 70-year span in age.

The whole notion of our meeting was to hear Wally's thoughts about Labor Day, and seeing the grain elevators ignited his imagination. His arm swung up, his fingers thrusting toward the sky. He began telling stories in a cadence shaped by a childhood spent in a lakefront neighborhood: He spoke in hard consonants, each thought an exclamation, and with a dramatic pause – hands frozen for an instant – before the climax of each story.

It is not a railroad, for instance, but a rayroad, a word he offered in the beautiful old language of his city. 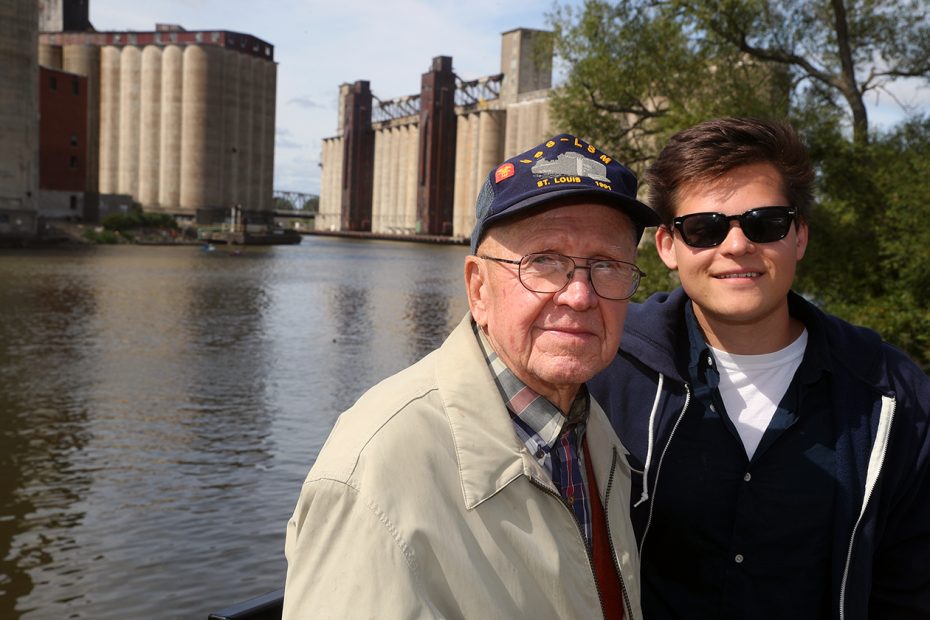 Wally Kowal, at 92, with his grandson Greg, who's 70 years younger - and as much a friend as grandson. (John Hickey/Buffalo News)

He recalled how he was raised in the First Ward, when the freighters still came in off the lakes to crowd the harbor. By age 14, during the Great Depression, he was climbing onto the ships to sell the old Courier-Express for a nickel apiece to the guys on board, a couple of pennies more for every paper than he could get on shore.

His parents were Ukrainian immigrants – "Ukies," as he calls them – and he can still drop into high-speed Ukrainian with playful ease.

He remembers playing with the late Jimmy Griffin, longtime mayor of Buffalo, when they were both little boys on a neighborhood playground.

He remembers moving from apartment to apartment in the First Ward, and how his father became upset with his mother during the Depression because she rented a flat on Elk Street for $21 a month, $3 more than their old place – $3 a month his father did not believe they could afford.

"I can't believe this, that you brought me here," Wally said Friday, his voice faraway as he stood alongside the river. "I'm living this again. I'll dream of this tonight."

To most of us, the grain elevators are a kind of industrial Stonehenge, haunting and mysterious forms – even raw works of art – from some distant past. Not to Wally, who still lives in South Buffalo. He knew every inch of Concrete-Central. He used to walk the roof. He'd warm up in a rooftop shanty. He helped paint the towers, more than 100 feet above the ground, a story he always tells his grandson as they look down from the Skyway.

When the silos needed sweeping? Wally was one of the guys who'd go up and down the sides in a little chair, using two circular levers to control his elevation, dangling above a long drop to sheer oblivion below.

"You get used to it," he said, which is the triumph of his life. 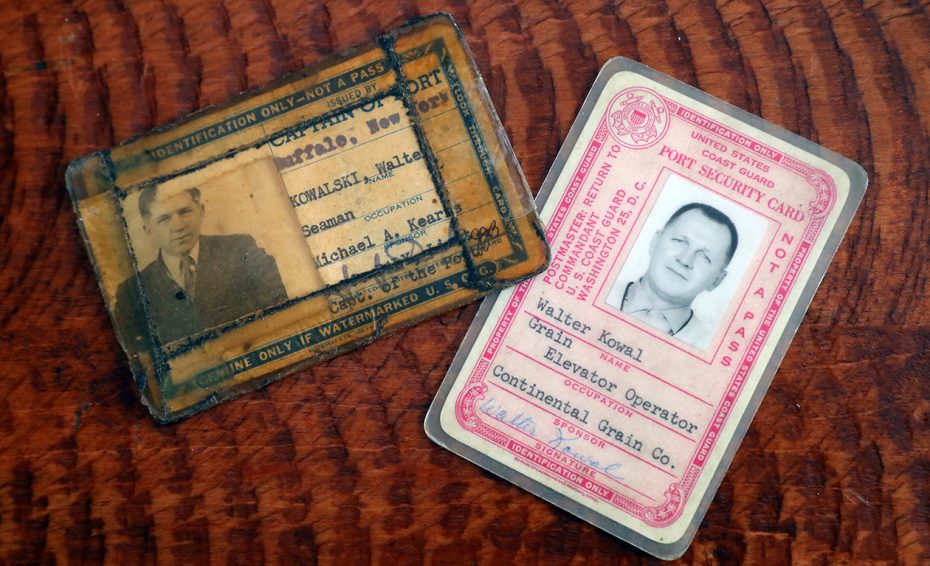 As a teen, he went for a while to South Park High School. His family kept moving around, and the administrators kicked him out when they realized he lived out of its district. He moved over to Hutch-Tech for a year or two, but – as he'll tell you – this was the Depression. Everyone was broke. As a newsboy, he'd grown to know the guys who ran the National Maritime Union on the waterfront. They found him a job on a ship called the Alfred H. Smith, a job that meant weeks and months away, sailing the lakes.

"My mother cried for days," he said, and for a moment he had to pause to collect himself. Even 76 years later, he grieves at her sorrow. The only other time he grew so emotional was recalling the moment he came home from serving in the Pacific during World War II, when his entire family was waiting for his train in the old Central Terminal. Thinking of it, the image staggered him.

He apologized. For a moment, he covered his eyes with his hand.

Then he was back, walking step by step in memory on the waterfront. He returned to the lakes after the war, serving as a helmsman on an ore carrier called the Amasa Stone, which would pick up coal from what's been transformed into the Erie Basin Marina. But he finally grew weary of the traveling. He'd met this young woman, Florence, in Buffalo, and he lost the desire to be gone so long from home. She is now his wife of 67 years.

"Enough was enough," he said. He went to work for Continental Grain as a union member of the International Longshoresmen. It was hard work, sometimes 16-hour days, but the overtime was good. It could be dangerous: He remembers how a man he knew was killed during a collapse inside a silo. High atop that structure, Wally was often alone with his thoughts, and with the cold winds from Lake Erie.

But he knew that elevator like few others. He painted the peak of the structure. He understood exactly how it worked. When Continental finally shut down, he went over a few blocks to work for General Mills, but he carried a sense of loss that he feels even now. When he looked out Friday at kayaks in the water, he saw the ghosts of men along the piers in steel-toed boots.

"There used to be so many jobs," he said softly.

In 1985, he retired, his body unbent, remarkably resilient, despite more than 45 years of physical toil. He's had another 30 years to enjoy retirement, to appreciate Florence, his three children, his five grandchildren. He loves his bicycle, which he sees – above all else – as the device that keeps him young. 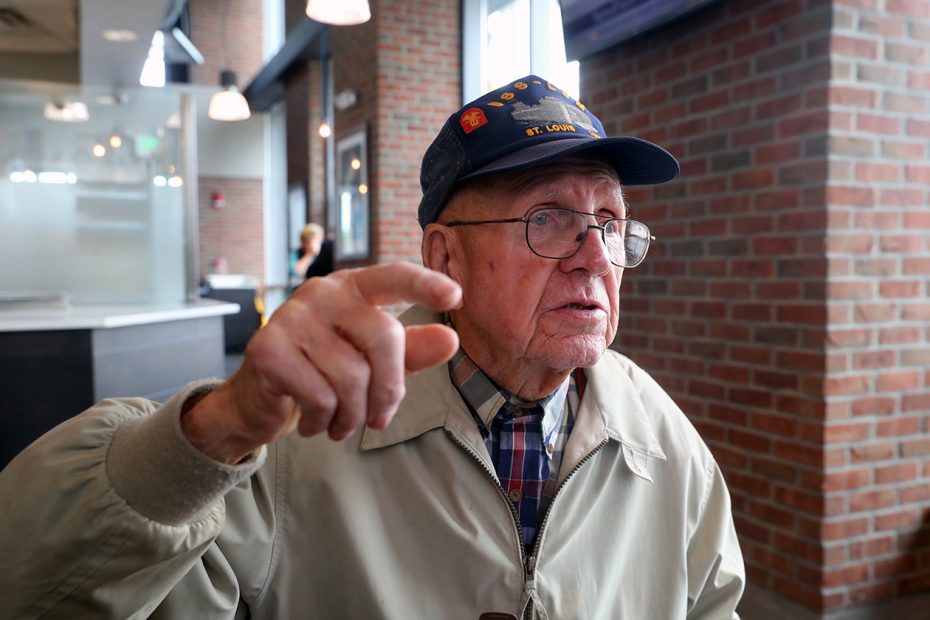 Wally Kowal: Powerful memories of a life on the waterfront. (John Hickey/Buffalo News)

"He's an amazing guy," said Greg, his grandson, who works as a deckhand on the Miss Buffalo II, a sightseeing ship that sails out of the harbor. Every summer, Lorraine Pierro serves as the tour guide on a series of boat rides that are called "the historic Buffalo River Cruise."

Those rides – the last one of the season is today, Labor Day – take passengers through the old lakefront core of the city's commercial history. The mission is reminding travelers how the concrete and stone landmarks near the lake were the absolute forge that shaped the city as it is now.

A month or two ago, Greg bought his grandfather a ticket. Wally started off the tour, which begins at the Miss Buffalo Dock at the marina, as just another member of the group. But before long, Wally's arms were reaching toward the elevators, and he was telling stories. Pierro, president of Buffalo's Industrial Heritage Committee, was astute enough to realize Wally wasn't there to look at history.

He was there to represent it.

She handed him the microphone, and stepped back.

The final heritage tour of the season is at 12:30 p.m. Sept. 4. Wally isn't sure yet if he's going, but he paused last week when asked what he thinks about Labor Day.

"Well," said the living soul of the waterfront, "I like the idea."