They say everything's bigger in Texas.

Catastrophic storms are no exception.

Leaving Hurricane Harvey's devastating 130 mph winds at landfall out of the equation and comparing only precipitation that the storm's wall of rain has dropped over southeast Texas over the last four days, consider this:

If the precipitation totals in Houston fell as snow the way they did during Buffalo's epic double lake-effect snowstorm of November 2014, it would pile up roughly 421 inches.

Meteorologists typically use a 10:1 ratio when computing snow-to-water equivalent. Sometimes the ratio is higher when the air is colder and the snow is fluffier and sometimes it's lower when the temperature is closer to freezing and there's more water in each snowflake.

The National Weather Service in Houston reported its office logged 42.11 inches of rain between Friday and Monday.

Here are some rainfall totals from across Southeast Texas since last Friday. #houwx #Harvey pic.twitter.com/loeVZDWH8j

Using the 10:1 ratio as a guide, Harvey's precipitation in Houston would more than double the precipitation amount from Buffalo Niagara's snowiest winter ever ― 1976-77 ― when 199.4 inches of snow fell. That winter included the infamous Blizzard of '77.

If the mind-numbing 88 inches of snow that fell in four days over Cowlesville in Wyoming County seemed like an outlandish amount of precipitation to fall in 96 hours, multiply that by almost five for Harvey.

If there are similarities between the two events beyond all the superlatives and international attention, it could be in the way both were forecast.

Like Snowvember, forecasters knew Harvey was going to be really bad. But maybe not this really bad.

Early forecasts called for a couple of feet of rain. When all's said and done, totals will come in closer to five feet.

As reported by the Capital Weather Gang at the Washington Post: "On Thursday and Friday, computer models were simulating so much rain, with peak totals of 40 to 60 inches, that some of us were ambivalent on predicting that much ourselves. We had never seen anything like it. But it turns out the models had the right idea."

Similar things were said after Snowvember.

The Post's report also pointed out that the exact locations where the most of Harvey's rain would fall also proved tricky.

"We knew since Tuesday or Wednesday that it was going to rain a ton, but our models aren’t yet quite good enough to know where the heaviest rain is going to focus — which makes it challenging for emergency responders to pre-position and prepare," according to the Capital Weather Gang's Monday analysis. "This underscores the need to develop improved high-resolution models that can better isolate where the most extreme weather is going to occur at longer lead times."

Pinpointing exact locations for lake-effect snow is always tricky. In November 2014's double lake-effect storm, accumulations varied by feet from one end of a town to another. 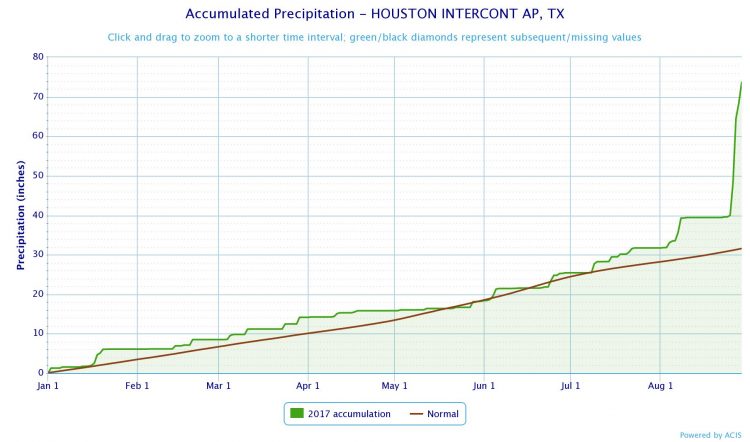 With the more than 40 inches of rainfall from Harvey, Houston broke its record for most rain in an entire year on Aug. 28. (xmACIS2)

More rain is expected today and tonight, forecasts show, before Harvey finally lets go of its grip on the region and charts a course northeastward.