Outlook: Currin is aiming for a more balanced offensive attack after the Bulldogs ran for more than twice as many yards as they passed for last season. Senior QB Bryan Cybulski is coming off an all-league season in which he threw for 1,146 yards and 12 TDs. Senior Christian Snell scored 18 times last year as the team’s lead running back but is moving to receiver. Senior Riley Pastuszynski will line up at the other receiver spot and also play cornerback and kicker. Taking over for Snell in the backfield will be junior Colin Skowronski. Seniors Glenn Drew, Stephan Marks and Levi Grant are back along the line, as is classmate Brandon Windnagle at fullback and linebacker.

Outlook: A deep and talented junior class and a solid group of seniors who play both ways should have the Steelers competing for the division and Section VI crowns after upsetting top-seeded Medina in the sectional quarterfinals last year. Jakwon Ingram is an honorable mention All-WNY defensive end and also paves the way at fullback for running back Khalil Horton, who doubles as a linebacker. At 6-foot-2, the Smith twins are some of the best athletes in the area. Noble Smith is quarterback and London a wide receiver on offense. Both start in the defensive backfield as well. Seniors Robert Rice (TE/DE), Danny Elvers (WR/LB) and Terrell Brower (OL/DL) return as starters. Notable juniors include linebacker Emmanuel Land, G/DT Tay Cummings, OL/DT Chandell Wiggins and WR/CB Juan Rodriguez.

Outlook: University of Toledo commit Jalin Cooper is on the preseason watch list of Section VI Player of the Year candidates. He’ll be catching passes from second-year junior Izaiah Rhim. Valley’s counting on senior receivers Mason Lewis and Brendan Luthart to take some pressure off Cooper in the passing game. Lewis and Luthart start on defense at corner, as does Cooper at rush end. Ian Joseph is the only returning starter on the offensive line and also starts at middle linebacker. Junior William Braswell is a 6-foot, 180-pound running back who also runs track. Last year’s starting WR/SS Johnny Salone transferred to Section V’s Greece Athena. A new turf field should be ready for the Week 3 home opener. 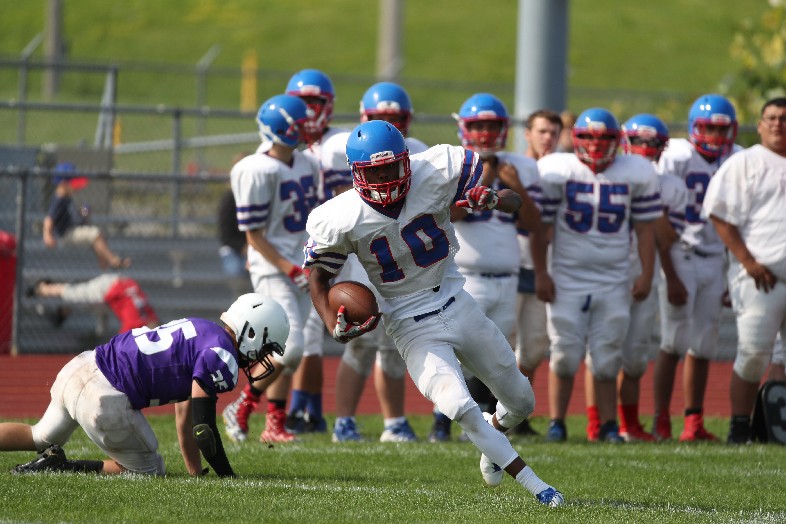 Outlook: Nagel is hoping a great summer of camps leads to another jump in the win column. Of the 28 kids on the roster, 18 are seniors and five are three-year players. Senior Brandon Gross is back for his third season at quarterback. Classmates Connor Hill and Chad Dunbar are returning all-league linemen. Senior RB/LB Julian Nixon is the strongest kid on the team and also helped the 4x400 relay break the school record last year. Newfane is renting portable lights for the Week 2 matchup against Lew-Port. Nearly 1,500 people came out when the school did it two years ago.

Outlook: A majority of the junior-dominated, 28-man roster follows longtime JV coach Baker up to varsity. Team strengths fall along the line and at linebacker. Six-foot-6, 300-pound senior Salvatore Gioeli had surgery on his knee after an injury in a team camp this summer but is expected to return in a few weeks. Senior linemen Matt Steves, Aiden Haley and CJ Kern all missed time last year but are back healthy. Ben Schwab, Ian Whitford and brothers Gavin and Walker Samanka make up the linebacking corps. Junior QB Charlie Brigham started for Baker on JV the last three years. Classmate Charlie Bruning is a three-sport athlete (baseball, basketball) and will be used as a pass catcher and defensive end.

Outlook: Kelly feels his team is weeks ahead of where they were at this point last year. A summer passing scrimmage showed some solid speed and athleticism. The Warriors have experience at running back in returning juniors Noah Ray and Zach Braddell. All-league lineman Henry Palermo comes into his senior season much stronger, squatting close to 400 pounds and benching 300. Senior Chris Tartick moves from tight end to quarterback and is a good all-around athlete. Senior Noah Gillies plays on the soccer team and is also a one-step kicker with a range from 40 yards out, according to Kelly. Sophomores Jason Frazer and Quinten Badner man two linebacker spots.