For the past month, a daily spectacle has been unfolding near the intersection of East Ferry Street and Michigan Avenue.

Traffic often slows to a crawl. Drivers honk their horns, crane their heads out of their windows and yell two-word phrases at the top of their lungs.

The cause of the slowdown is a happy one: A community-driven mural project featuring portraits of 28 local and national civil rights leaders arrayed across a 300-foot concrete wall. The two-word phrases are "thank you," "bless you" and "good job."

The mural, called "Freedom Wall" and sponsored by the Albright-Knox Art Gallery, is still weeks from completion. But it is already the most buzzworthy public art project in Buffalo since "Shark Girl" appeared in 2014, prompting an outpouring of community support, hundreds of social media posts and countless honks, high-fives and hugs.

The four Buffalo painters working on the wall -- John Baker, Julia Bottoms-Douglas, Chuck Tingley and Edreys Wajed -- have been overwhelmed by the community's reaction to the piece.

"It's people stopping every five minutes, either to honk or pull over and say thank you to us," said Bottoms-Douglas during a break from working on her portrait of former State Assemblyman Arthur O. Eve. "I wasn't expecting that kind of outpouring. I know art has the power to reach people in that way, but I didn't realize it was going to become as big a deal as it has become."

Albright-Knox does about-face on East Side portrait project

The mural project, originally planned for Buffalo artist Chuck Tingley to execute on his own, was the subject of a  controversy earlier this year. After listening to the concerns of neighborhood residents and others from across the East Side, the Albright-Knox expanded to the project to include three black artists: Bottoms-Douglas, Baker and Wajed.

Now, in a near-constant show of support, that community has taken ownership of mural. It's drawing tourists from outside the city. And fans are hailing it as a powerful example of community-based public art and an argument for diversity and inclusion at a time of rising racial tension. 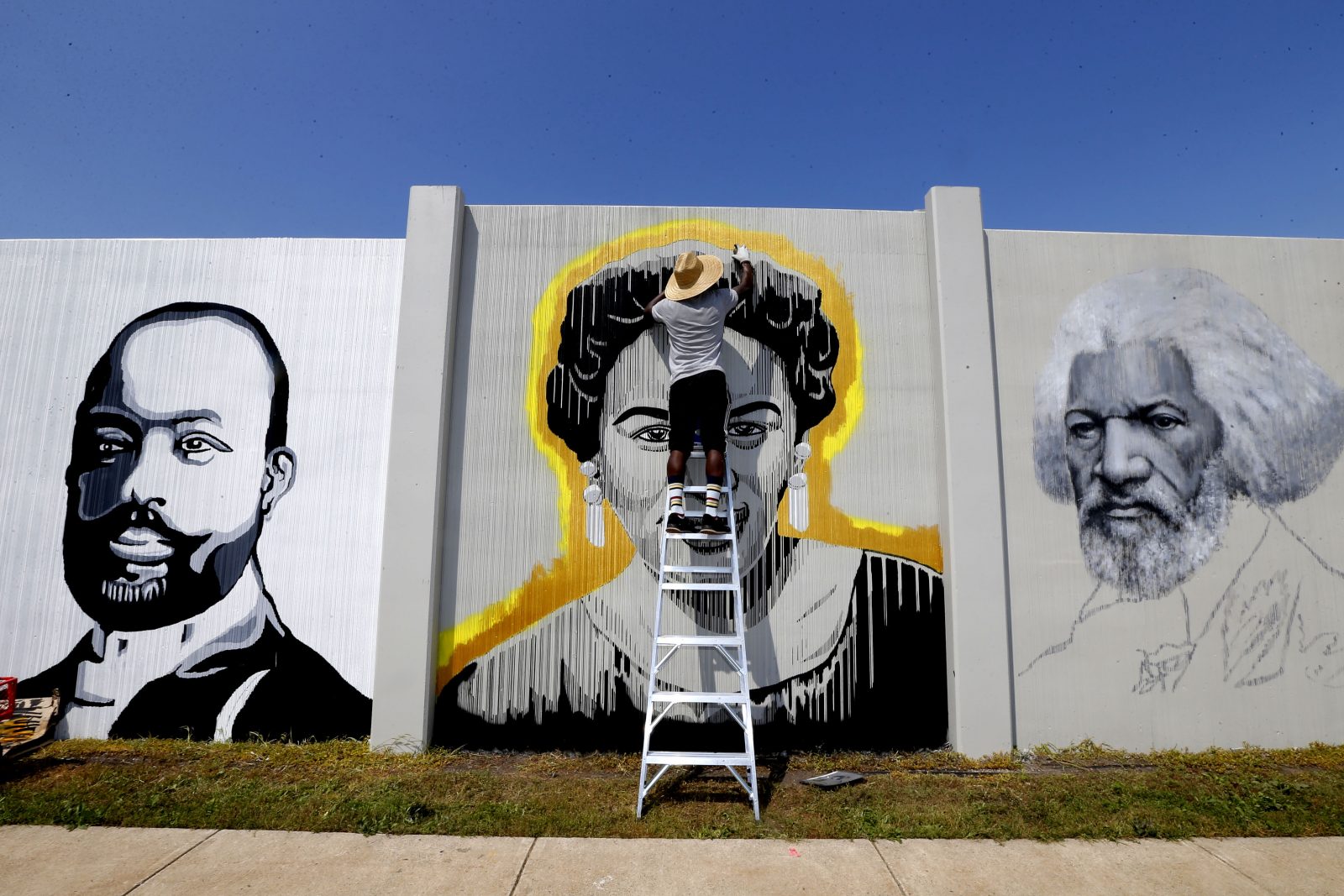 "This wall is so important, especially now, because we have so many problems nationwide when it comes to race," said longtime Buffalo activist and writer Eva Doyle, who is featured on the wall in a portrait by Bottoms-Douglas. Doyle, who is retired from a teaching career in the Buffalo Public Schools, said she visits the wall every day.

"One of the reasons we have so many racial problems is because we don't know one another," she said. "We don't interact with each other. This wall is an outdoor museum. It brings people together."

On a recent Tuesday evening, hundreds of a community members gathered at the wall to celebrate its progress and chat with the artists. Neighborhood residents and families from across the city mingled in front of the half-finished portraits, telling stories from their own experiences in the civil rights fight or asking artists to about some of the wall's lesser-known figures. 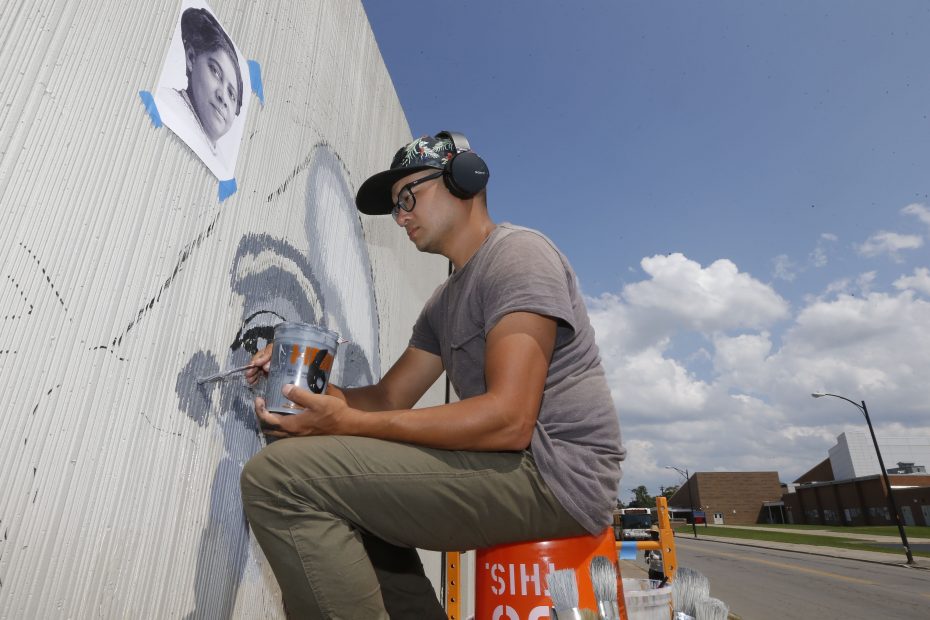 Benjamin Willis, a Buffalo resident and admirer of the project, said he was happy it honors so many important local figures.

"I think it's a beautiful project," Willis said. "Eva Doyle was a second-grade teacher of mine, and I remember even as a 7- or 8-year-old that she was teaching black history in school and the importance of having pride in yourself and understanding some of our accomplishments as a people."

As the sun beat down on the wall on a recent afternoon, Wajed used a marker to apply thick black strokes to the wall for his portrait of Lydia T. Wright, Buffalo's first black pediatrician. Next to Wright was an outline of Frederick Douglass, a juxtaposition that shows the range of local and national figures as well as historical time periods the wall represents.

"The work that [Douglass] did paved the way for Dr. Lydia T. Wright to go to school and become a doctor and claim the right to do that," Wajed said. "I hope that these 28 panels will spark that in people, to know that collectiveness, unity, is what we all need. Several of these people on this wall are gone, but what they left was the work." 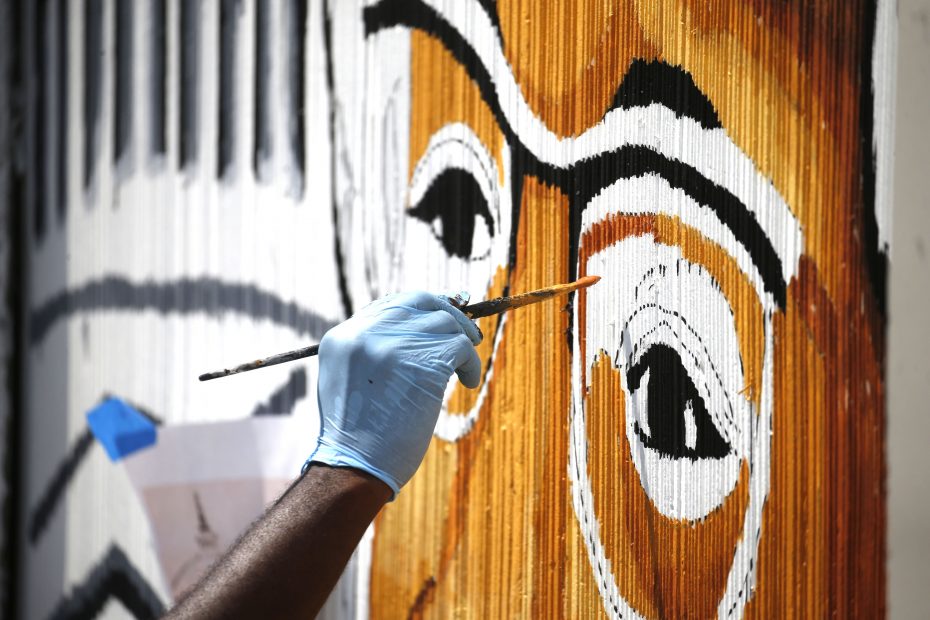 For Baker, the wall represents a model community project others can replicate.

"The success that we've had already is unbelievable," Baker said as he filled in the hair on his portrait of politician Shirley Chisholm, who moved to Buffalo in the 1980s after serving in congress. "It just goes to show, if you do something that's representative of the community, they will support it and they will turn out for it."

Gwen McKinnon, who was leading a group of United Way volunteers through the area recently, said the project should serve as an example for other communities that want to take ownership of their own history.

"This is the beginning of Buffalo telling the story of its history," McKinnon said. "It should be in every area of the city. We all have our different cultures and we all have people that represent us."

While Baker was talking, as happens often, a car slowed and the driver honked his horn. Baker waved his hand in gratitude without even glancing away from his work. 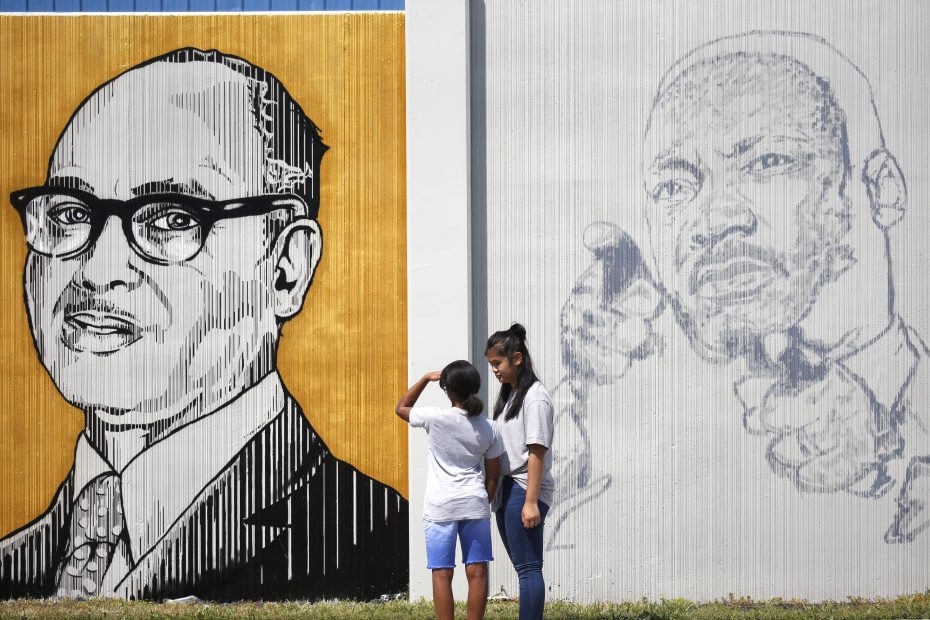 "A lot of times I don't even turn my head," he said, "because if you do it every time someone honked their horn or called out to you, you'd never get anything done. I know people who have changed their route to work just to drive by here to see the progress."

As artistic problems go, all four painters agree that an excess of admiration is a good one to have.

As for Tingley, whose role in the project shrank as a result of community blowback to the original plan, he said he can't imagine the mural being done any other way.

.@EdreysWajed on how the public has been reacting so far to his work on the West Ferry "Freedom Wall": pic.twitter.com/fXNyO65tRo

"Looking back on it now, it's almost unbelievable that it could have been just me on this wall, versus what it is now and how important it is to have other artists of color on the wall," Tingley said. "I think it's a wakeup call for all of us, including myself."

Tingley said that the community-driven process, including whittling down a list of potential names from 300 to 28, was essential to the success of the project.

"The community spoke up, and that's what matters. It's about them," he said. "We're not even close to being done with the project and I can already see what it's doing. That's amazing."