In the late summer of 2011, Susan and Fluarry Jackson were driving home from their daughter’s track meet when they got a call from their son, Tyree. The head football coach at the high school wanted them to come in for a talk.

A few minutes later, they walked into Mona Shores, a small school on Lake Michigan south of Muskegon. The first thing they noticed was Tyree’s legs, which were bloody and bandaged below both knees. "We were working on the treadmills and they turned it all the way up to the highest incline," Jackson recalled. "I fell and cut my shins up and was bleeding everywhere."

The Jacksons proceeded to their meeting with the new Mona Shores football coach, Matt Koziak. He asked them how they would feel if he moved Tyree up to varsity and made him the starting quarterback. Tyree was 13.

"You already hurt yourself on a treadmill and you want to move up?" his mother said. "Why do you want to play varsity?"

"Because I want to play college football," he said.

The Jacksons had reservations, of course. Tyree was 5-foot-8, 135 pounds at the time. He was the youngest of three, the baby of the family. But playing in college had always been his dream. He had a gun for an arm and a mind for the game. Koziak said he was the most advanced of his quarterbacks, even at 13.

So they decided to let their son give it a shot, as long as he stayed safe. But knowing he would be getting hit by 18-year-olds, they had their doubts.

"Oh, absolutely," Susan said. "My husband and I were a nervous wreck before every single game. We no longer sat in the bleachers. We stood at a fence right there. Some people were like, ‘I can’t believe you guys let him do that!’ We always told him, if you get hurt, you’re out. But he didn’t. He did great. He hung with them all and got tougher every day."

It wasn’t easy. Mona Shores didn’t have much of a football program at the time. They went 1-8 in Tyree’s freshman year. But they got better every season. They earned the school’s first-ever playoff berth when he was a junior and lost in the Division 2 state finals his senior year.

The Mona Shores athletic director, Ryan Portenga, was so moved by Jackson’s career that he wrote a book about it, called "Flipping Football, A True Story of Resilience and Transformation."

Three years later, as a 19-year-old sophomore, Jackson is entering his second year as the starting quarterback for the University at Buffalo, once again hoping to lead a struggling program through a similar transformation.

A year ago, the Bulls suffered through a 2-10 season with Jackson as their redshirt freshman QB. If UB fans are looking for parallels, they can find comfort in the notion that the team’s most important player – who has grown to 6-7, 245 pounds since coming to Buffalo – has been through this before.

"Going 2-10 last year, it was kind of the same thing, with a lot of people counting us out the next year," Jackson said. "If you’ve gone through that kind of adversity, you know you have to trust the process.

"We trust coach (Lance) Leipold and we believe in what he has for us. I think the guys in the locker room are doing that, and it’s going to pay dividends on the field. I think we can surprise a lot of people this year."

That’s spoken like a true leader. Even when he was 13, Jackson felt it was important for the quarterback to lead. For the most part, the older kids followed him. He was a natural, mature beyond his years, fiercely competitive yet humble enough to know how much he had to learn. 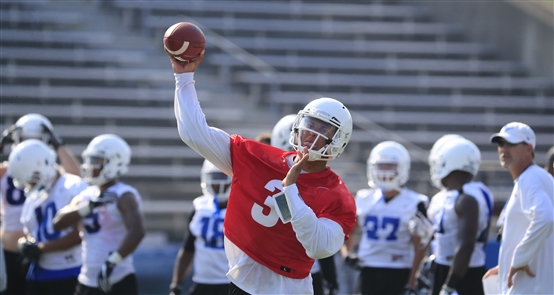 Jackson’s physical growth has been even more remarkable. He was 6-5 when he showed up at UB in the summer of 2015. He’s now 6-7. His mother said she’s not sure he’s finished growing.

"When we took him to one of his physicals at 10 or 11, the doctor had one of those charts that tell you how tall you’re going to be and he said he’s going to be 6-7," she said. "We just laughed."

Jackson recently ran 4.57 seconds in the 40-yard dash, roughly what NFL star Cam Newton ran when he came out of college. Jackson has massive hands, much larger than a typical NFL quarterback.

"He’s easily the most talented player they’ve ever had at his position, without a doubt," said former UB quarterback Joe Licata, now the football coach and AD at Timon. "Way more talent than myself or Drew Willy and all these guys. We all knew that from the beginning.

"But he was very, very raw, and he needed a ton of work. But he always had that attitude where he wanted to make it and be the guy. He had some growing up to do, but you could tell the kid wanted it. If he stays humble and hungry and healthy, he’ll be the first quarterback drafted out of UB."

Jackson redshirted in 2015 and watched Licata as a senior, soaking up all the knowledge he could. He won a three-man battle for the No. 1 job last season and showed alternating flashes of brilliance and inexperience.

He started nine games, finishing with nine TD passes and nine interceptions. Jackson rushed for 459 yards and passed for 180 yards a game, showing the staggering athletic talent that has avid Bulls fans wondering how good he could be after another year of seasoning and physical development.

"He wants to take coaching, and he wants to be great," said Jim Zebrowski, in his first year as quarterbacks coach at UB after a stint at Minnesota. "That’s a great thing to have. He’s a smart kid who picks up things really fast."

Zebrowski said Jackson needs to work on his footwork and shorten his stride so that his throwing motion will be smoother and more accurate. The two have developed a strong bond. Zebrowski has a reputation for developing young quarterbacks and has worked with some good ones. But he said he’s never seen anyone with the Tyree’s physical gifts.

"The closest one I had was MarQueis Gray my first year in Minnesota," said Zebrowski. Gray switched to tight end and played two years for the Bills. He’s now with Miami. "MarQueis was an athlete who was playing quarterback. Ty is a quarterback who happens to be an athlete. That’s what’s awesome."

Jackson has a daunting task ahead. The UB offense was 126th out of 128 teams in scoring last season. They didn’t score on any opening drive. He’ll be counted on to play at a higher level in a critical transition year for Leipold. Jackson said he doesn’t imagine if he might be thriving for a program at a much higher level than UB’s.

"Not really," he said. "I think God kind of put me here for the reason, for the people I’ve met and the connections I made. I think it’s all going to pay off. I had other offers (UConn was the biggest), but at the end of the day, I think God led me to Buffalo and that’s going to pay off."

The Jacksons are a deeply religious family, more so after Dad suffered a serious blood infection after injuring his back in a fall during Tyree’s junior season. Fluarry (so named, Tyree said, because he was born during a blizzard) spent six weeks in the hospital and was out of work for a year.

"We almost lost him," Susan Jackson said. "We were always a close and religious family, but our faith is a lot stronger now."

Jackson has faith in this UB team, despite what the skeptics might say. He loves Buffalo, loves the food. He grew up on a lake, so the weather isn’t an issue. Sure, it can be tough to look up in the stands and see the sparse crowds at home games, but they won two games, after all.

"I think that as a team, it’s our job to win games to bring the people here," he said. "It’s not that Buffalo people don’t want to root for us. I think we have to give them something to root for, a winning team and a winning culture."

In the meantime, they might want to show up to catch a glimpse of a rising star, a guy they might one day see playing on Sundays.