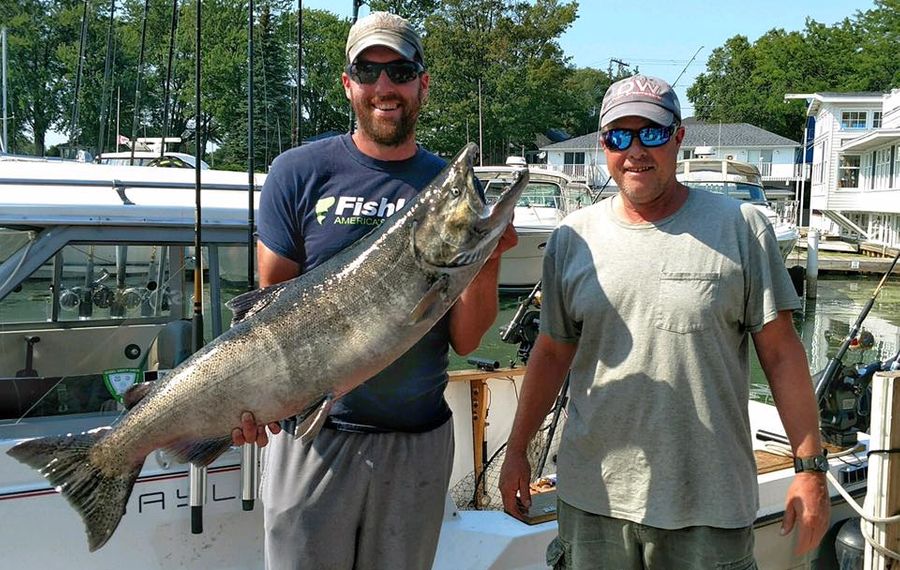 Once again, there are a good mix of fishing contests on Lake Erie and Lake Ontario. On Erie, the Innovative Outdoors Big Fish Friday will be Aug. 24, followed by the Innovative Outdoors Walleye Challenge out of Dunkirk on Aug. 25. Contact Jim Steel at 983-7867 for more information. On Lake Ontario, the Lake Ontario Counties Trout and Salmon Derby is going on through Labor Day. Find out information at www.loc.org. The Greater Niagara Fish Odyssey Derby runs through . Aug. 27. Check out www.fishodyssey.net for details. You can still sign up for both contests as long as you sign up before fishing. Who knows what will happen with the fishing this week after high winds and storms. Keep your fingers crossed.

The rumor mill had started for perch fishing, but anglers have been keeping things close to the vest. Some inside information has some early perch action on either side of 70 feet east of Cattaragus Creek. West of the Catt there have been some good walleye reports. Then again, there have been walleye reports from Buffalo to Barcelona and beyond. There are a variety of options to choose from. Capt. Joe Fonzi and Tim Connor of Dania Beach, Fla.,worked 40 to 50 foot depths around any kind of bottom structure – humps, rocks, reef and shoals with a bottom bouncing system using a chugging iron. When they located fish on their graph, they used a 5-of-diamonds chartreuse worm harness to catch them initially. When they found a larger pod of fish, they pulled out the drop shot gear rigged with 3-inch Gulp! Minnows to catch ‘eyes from the school. They also caught smallmouth bass, silver bass and rock bass. The drop shot method works only for a couple of weeks every late August and early September. Give it a try some time. Trollers have been doing well off Dunkirk in 90 to 110 feet of water on stickbaits. Information has been close to the vest though with the Walleye Challenge happening. We’ll give you a full report next week. A big announcement on tournament bass fishing: the Costa FLW Series will be holding a Northern Division event in 2018 out of Buffalo. See this week’s Scattershot section.

John Van Hoff of North Tonawanda went out fishing last Sunday, the final day for the Orleans County Rotary Derby. The leader was still 30 pounds, 9 ounces and he thought he had a chance to beat that mark. Using a flasher and meat rig, he pounded the Niagara Bar all morning. With less than an hour to go in the derby, Van Hoff hit a fish that looked to be over 30 pounds. Would it beat Keith Sheffield’s king salmon … and could he make it to the Slippery Sinker in Olcott in time by the 1 p.m. cut-off? Van Hoff made it with 15 minutes to spare and the weight was 30 pounds, 12 ounces – taking over the lead and eventually winning the $4,000 grand prize. Other winners were Robert Griffith of Copley, Ohio, with a 16-pound steelhead, Bill Cole of Albion with a 14-pound brown trout and Dan DeGeorge of Rochester with a 17-1/2-pound lake trout. Meanwhile, two hours after Van Hoff caught his winning salmon, Joe Oakes of Lockport was reeling in a 34-1/2-pound salmon out of Wilson that would take over the lead in the Lake Ontario Counties Trout and Salmon Derby and the Greater Niagara Fish Odyssey in the Salmon Division. The bar has been set as the LOC Derby continues through Labor Day and the Odyssey continues through Sunday. Speaking of the Odyssey, updates are now being put on the Fish Odyssey Facebook page due to the fact that webmaster Karen Evarts at The Boat Doctors needed emergency surgery. The awards for the Odyssey will be Sunday at Olcott Fire Hall on Route 78 starting at 4 p.m. Back to Oakes and his fish, he was amazed at the huge school of salmon that extended from Wilson to Olcott. They stayed on them the entire time in 350 to 400 feet of water. Lots of mature kings. There are also some fish inside of 100 feet, kings and browns. In fact, Mike Boncore was looking for a big carp in Wilson Harbor when he sighted a jumping salmon that was huge. He was hoping to catch it. However, he ended up catching an 11-pound 14-ounce brown trout in the harbor. The Niagara Bar is also a great spot for kings.

Walleye action at the mouth of the Niagara has been good with worm harnesses. Bass fishing has also been good as John Holden, Rick Hilts and his son Christian hauled in some 30 bass for the morning this week while fishing with Capt. Joe Marra of Lewiston. Of course they caught sheepshead, too. Crayfish and shiners were the best live baits.

The combination of new moon and Eclipse turned the muskies on this week. Mike Sperry with Chautauqua Reel Outdoors reported some good musky fishing in the morning on Monday, taking three fish. The largest was taken on a Leo jerk bait in 14 feet of water off the weed line – a fish that stretched 48 inches. One friend caught two muskies in the morning, another had three. Walleye action continues to be consistent around the lake, but especially up north in the deeper water (25-30 foot depths). Downriggers and lead core line are both working. Hot-N-Tots, Shad Raps and Flicker Shad baits are all working. Worm harnesses will also work, but it’s tough to keep the perch off the line – they are everywhere.