A family of five fled an early Tuesday morning fire — three of them escaping by jumping from a second-floor window.

The owner of the home, Jeffrey Neureuter, described the fire as "suspicious."

And Hamburg Police later discovered a man near the home with property taken from inside the severely damaged home. Nicholas A. Harms, 31, of Eden, faces several charges, not related to the start of the fire.

Firefighters from several volunteer companies responded to 95 Rosedale Ave. after the call went out at 2:24 a.m.

A non-working fire hydrant on Rosedale forced firefighters to access water from another hydrant, neighbors said.

One of the family's two dogs died in the fire, neighbors said Wednesday morning.

Harms was charged with second-degree burglary, unauthorized use of a motor vehicle, petit larceny, possession of stolen property and trespass, according to authorities.

On Wednesday evening, Harms pleaded not guilty at his arraignment before Hamburg Village Justice Andrew P. Fleming, who set bail at $100,000. The judge set a felony hearing for Harms to be held at 4:30 p.m. on Friday. 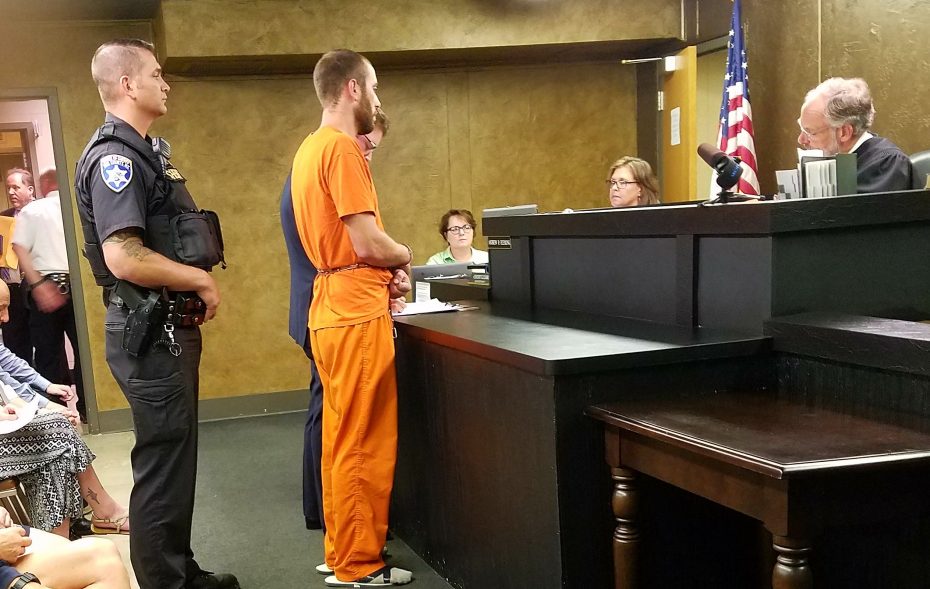 A woman who described herself as longtime friend of the family attended Wednesday's arraignment and expressed shock afterwards.

The woman, who did not want to be identified by name, described the family as great people who didn't deserve such a tragedy to happen.

The village court documents also alleged that Harms entered two vehicles owned by Jeffrey Neureuter, and allegedly stole a GPS system, computer cords and a "Tule tool" from them.

Harms, the village court documents charged, was allegedly discovered in a driveway adjacent to the family's burning house.

At the time, he was not wearing shoes, which were later located on the lawn of the burning house, according to accusations in the court documents. The items that were allegedly stolen were retrieved by Hamburg Police from Harms' shorts pockets, according to the documents from Hamburg Village Court.

Two firefighters were transported to the hospital and treated for minor injuries, the Hamburg Volunteer Fire Department reported.

The cause of the fire is still under investigation, according to Hamburg Village Police Chief Michael C. Melisz. Anyone with information about the fire is asked to call Hamburg Police detectives at 649-4501.

No damage estimate for the house was released as of Wednesday night.

Hamburg Village Hall, 100 Main St., is a drop-off point for donations to help the Neureuter family.