If you think horror movies are just for Halloween – you should talk to Peter Vullo.

The lifelong horror fan loves the genre so much he's making sure horror movies are on the big-screen nearly year-round – at least on Thursday nights.

Vullo is creator, curator and host of the "Thursday Night Terrors" film series at the Dipson Amherst Theatre, which returns for its third season at 7:30 p.m. Aug. 24 with Lucio Fulci's "Zombie."

He created the series after finding himself traveling to Rochester and Toronto to see films like David Cronenberg's "Ringers" and David Lynch's "Eraserhead" on a big screen. One day he asked himself this question: "Why can't I see these movies in Buffalo?"

"There were a lot of different screenings and film series in Buffalo," Vullo recalled. "They were all great and I attended many of them. But I thought we needed more genre movies, like horror – movies I loved that I never saw on the big screen. And it was important to me to have that communal experience. I think the horror genre plays well with a crowd."

"It's a movie that plays well to crowds. It's gory and crazy but fun – the gore is so over the top it becomes cartoonish," Vullo said. "I wanted to take some of the stuffiness out of film screenings. I wanted it to be something people could have fun with and decompress and laugh, scream and clap. 'Dead Alive' was a great movie for that."

Since then he has shown a diverse array of horror styles, including the Vincent Price classic "House of Wax," John Carpenter's claustrophobic remake of "The Thing" and the 1982 Spanish slasher film "Pieces."

Vullo, 31, has loved horror movies since he was a kid growing up in Riverside, where he would visit the neighborhood video store with his dad and get lost in the horror section. He watched "Tales from the Crypt" on TV. He started collecting movies on VHS, then DVD and Blu-ray, and his collection now numbers in the hundreds.

"There's something about horror that scared me but also fascinated me. There are few genres that are as satisfying to me as horror," he said. 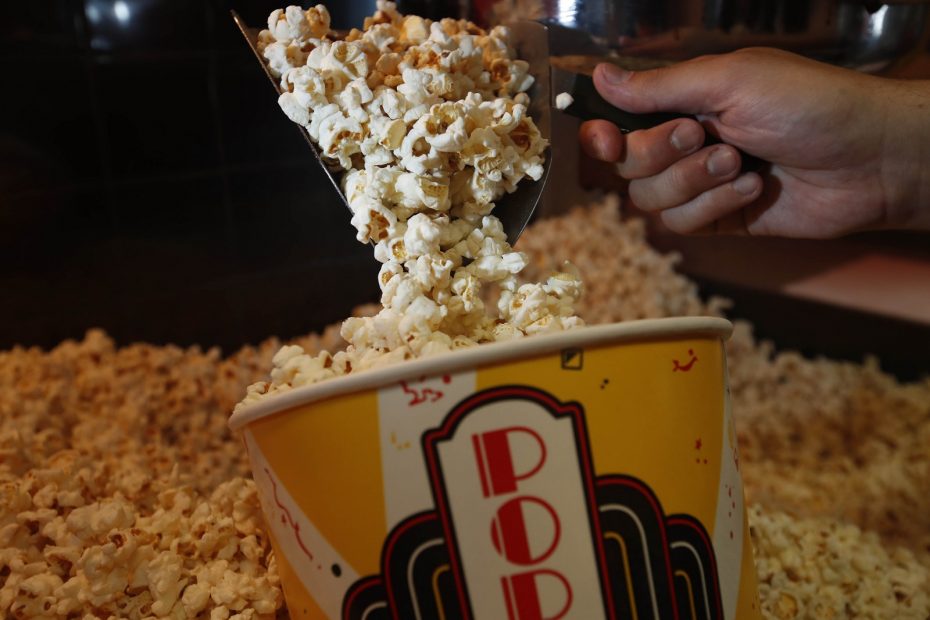 Get your popcorn ready for another year of Thursday Night Terrors. (Sharon Cantillon/Buffalo News)

He loves the atmosphere horror movies create and the music. He is drawn to the artistry of the special effects. He enjoys how they can be so many things all at once: frightening, funny, profound and, yes, even disgusting. He appreciates when social commentary looms beneath the surface of horror films from a master such as George Romero.

"As much as I program and host the series, I'm just a horror fan in the crowd. I'm watching movies just like everyone else. I've loved them for years, but I've been at home watching them," Vullo said. "Now when I watch at home I can't help but wonder if it will do well at 'Terrors.' "

"Thursday Night Terrors" is not simply a movie screening. Arrive early to peruse the tables in the lobby for horror movie-related merchandise from Deadend Toyz and Teeze or take a chance on winning fun prizes in a raffle.

Behind the raffle table is Nicole June Wurstner, Vullo's girlfriend, who he said has been pivotal in the success of the series. "I run all of my ideas by her to get her thoughts on them. She's been with me every step of the way. She's a strong organizer and supporter." 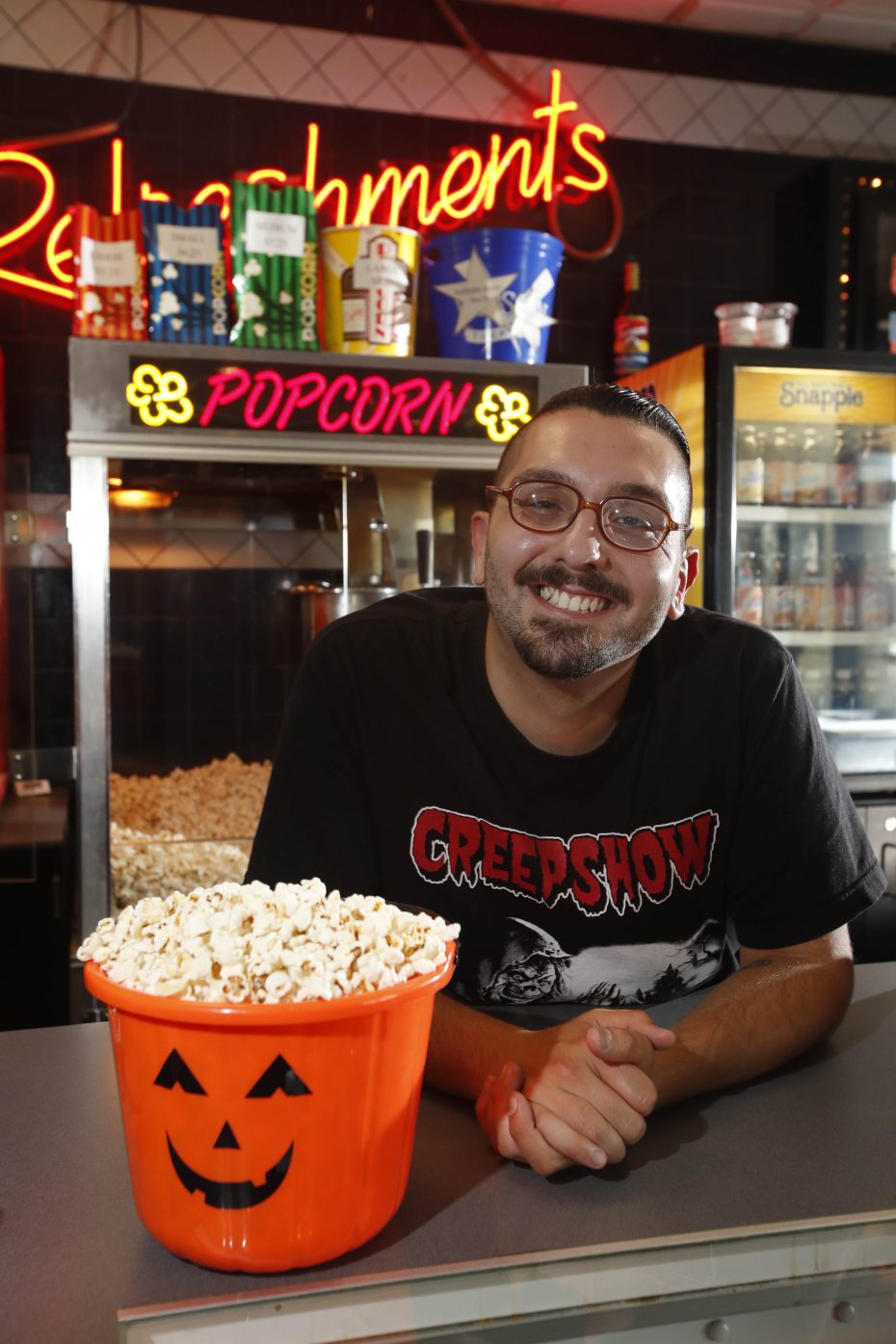 Peter Vullo is ready to greet guests in the lobby of the Dipson Amherst Theatre. (Sharon Cantillon/Buffalo News)

That ball of energy in the lobby talking to everyone? That's Vullo. He's friendly, energetic and is more apt to give you a hug than a fist bump. His hosting duties to introduce the movies have evolved into a mini stand-up routine. After the film he's back with the raffle and to see what everyone thought of the movie.

"He's always hanging out before and after every screening, talking to, and thanking everyone, endlessly, for their support of his beloved series," said Michael Burns, 28, of Hamburg, who has attended every "Terrors" screening with his wife, Darcie Newton. "Peter has made me look forward to going to these screenings even more with all that he does for them."

Newton echoed his thoughts. "We absolutely love the atmosphere, and Peter picks really unique movies. He really goes out of his way to pick movies that aren't screened often," she said. "Both my husband and I have been huge horror fans for years, so we've seen a lot of the classics at home before, but never on the big screen."

The couple attends other movie series such as Buffalo Film Seminars and the retro series at the Transit Drive-In, but Burns said nothing compares to "Terrors."

"While most theaters only show classic horror films around Halloween time, Peter is keeping horror alive year-round and selling the place out," Burns said.

As much as he loves showing the movies, Vullo is especially thrilled at the connections he made with other horror fans through "Terrors."

"I didn't know there was such a passionate community. I thought I was a weirdo," Vullo said with a laugh. "I'm in touch with communities on the internet. But I was traveling to see movies. I wondered who else loved this stuff around here. We started 'Terrors' and I met all these wonderful people. We don't feel like we're alone. We get to share our passion for horror. It's a really beautiful experience."

That connection also is appreciated by the moviegoers. "One of the best things is that we have made friends with other horror fans there. It is a place where we can truly be ourselves and not feel judged," Newton said.

As a thank you to patrons, Vullo threw a pizza party after the second season for what has become known as the "Terrors" crew. "I ordered pizza, had some drinks and we hung out in lobby of the theater and got to know each other. I never thought something like that would happen. It was truly a wonderful thing," Vullo said. 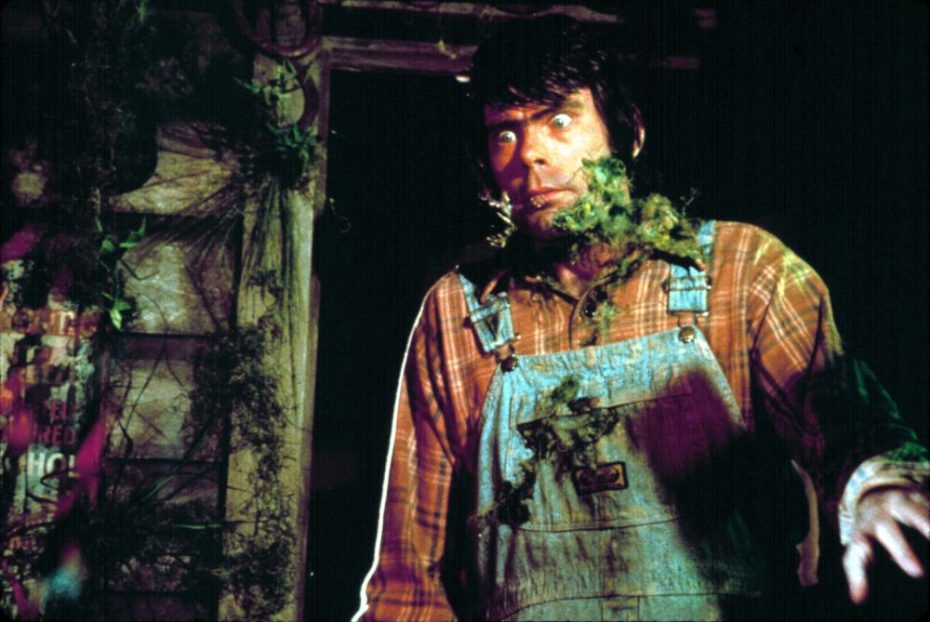 This new season of "Terrors" is especially meaningful to Vullo since he will finally show a film by one of the filmmakers he respects the most, director George A. Romero, who died recently. Romero's dark comedy anthology "Creepshow" screens as part of a double feature with "Halloween III: Season of the Witch" on Oct. 26.

"He is one of my favorite directors and a personal hero of mine. I am committed to paying my respects to Romero," said Vullo, who earlier this year traveled to the Pittsburgh area to visit locations from Romero's iconic zombie films "Night of the Living Dead" and "Dawn of the Dead."

"I've watched Romero's zombie films for as long as I can remember. To be in the same place they were filmed was a humbling experience. I met him at convention in Hamilton last summer. It turned out almost a year to the date that he passed. He was an inspirational figure to me."

For future screenings, Vullo wants to broaden his selection of movies by delving deeper into the history of horror films. "Most of the films are out of the '80s – my favorite time period. I'd like to jump forward and backward like we did with 'House of Wax,' which at this point is the oldest film we've shown. I don't want to be stuck in any particular era."

In the end, he simply wants to give horror fans the chance to see these movies here.

"I love Buffalo. I was born here and raised here," Vullo said. There's no reason we should have to go anywhere to experience culture and arts." 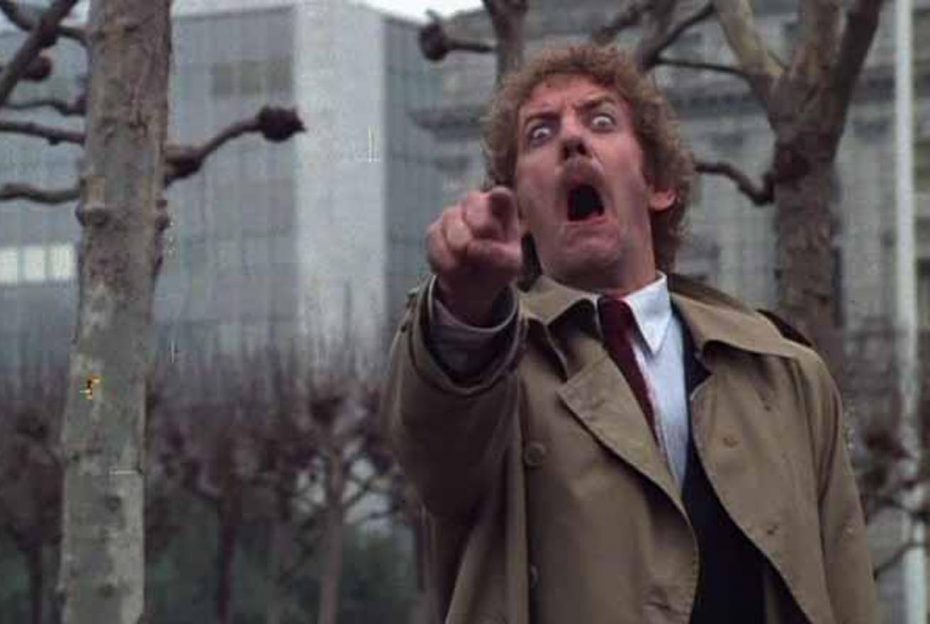 The iconic image of Donald Sutherland will stay with you long after you see "Invasion of the Body Snatchers" (1978).

The movies start at 7:30 p.m. at the Dipson Amherst Theatre (3500 Main St.). Tickets are $7 at the box office or at dipsontheatres.com. Here's the schedule:

From noir to Cultivate Cinema, local specialty screenings are big