Beach ball: It's not about getting some sun. It's about becoming better players for numerous girls who played competitive beach volleyball from May to August.

Between 30 and 40 girls participated in the 2-person team version of the sport to help prepare for the indoor season. The benefits: Playing beach volleyball in the sand not only helps players stay in shape but helps improve speed and agility, according to Rocco Lucci. Lucci is the director for Niagara Frontier Volleyball who also helps with the New York Outdoor Volleyball Association – which holds two tournaments at Woodlawn Beach but conducts most of them just outside Rochester.

"Lots of these high school kids are playing club during the offseason," said Lucci, adding that several boys also use the beach version of the sport for the same reasons. "These beach events will supplement their play. … When they're playing doubles they have to do all the skills and it makes them more well-rounded players."

Lancers embrace being the hunted: St. Mary's may have graduated the Monsignor Martin  Association Player of the Year in Caitlyn Meyer but the defending state champions appear to have the goods to pick up where they left off last season. Leading the Lancers' quest to win state title No. 19 is senior Summer Slade, a returning All-WNY pick who is committed to Duquesne. Other key players for coach Don Pieczynski's team include senior setter Jillian Vitale, junior Hannah Mulhern and sophomores Kelly Cleversley and Jasmine Brundage.

Key nonleaguers on the docket for the Lancers include a Sept. 19 clash against state Class A semifinalist Williamsville East and an Oct. 26 date against Eden.

"We know each year we have a target on our backs, but the girls are determined to prove their mettle," Pieczynski said. "We have depth, experience and versatility to make another title run. If the girls can hold each other accountable, it could very well happen."

St. Mary's will hit the road to participate in the annual Garden State Challenge in New Jersey Sept. 30 and Oct. 1.

Fanning the Flames: The good news and bad news for three-time defending Class A champion and two-time state semifinalist Williamsville East are as follows.

The bad: the Flames graduated a lot of players who had a hand in their success – including Lexi Novak who is playing for Division II Florida Southern College.

The good: The underclassmen were groomed to replace the graduates because they shared jobs with the seniors last year and also had a hand in the the Flames' success.

Leading the charge will be senior Makayla Greenfield. The four-year varsity player earned second team all-state last season and is considered one of the best setters in the area. Athletic Rachel Steffan returns after finishing second on the team in kills, even though she missed part of her sophomore season with a bum ankle. Other returnees for Scott Wright's team include senior Ally Jozwiak and freshman Summer Clark. Wright said the four returnees will set the tone for the team looking to fill two spots in its starting lineup.

"Just like everybody, you need some people to step up and play at that level," Wright said.

Among Class A contenders: Williamsville East won't have to wait too long to face one of the teams that's out to end its sectional championship reign. Hamburg and the Flames face each other to open the league slate with the Bulldogs hosting the first of two ECIC II meetings.

"Historically, these girls know each other from playing together in the club season so the rivalry builds," said John Crangle, whose team lost twice to Will East last year and is trying to get to its fifth sectional final in his eighth season as Bulldogs coach.

Grand Island lost in the final to Williamsville East last year. The Vikings graduated eight seniors, four of them starters – including All-WNY pick Lindsay Proctor, who is now at West Virginia.

Williamsville South and Sweet Home also could be in the mix come playoff time in late October.

Battle for ECIC I: Clarence is still the hunted, but Lancaster is lurking. So, too, are Orchard Park and Frontier as there won't be any easy nights in this league or in Class AA once the postseason commences.

Clarence has won the last three Class AA titles but will be younger than in past years with a lot of new faces in different spots.

"We have some pieces to build around," coach Michael Meyer said. "We're going to have to have a bunch of girls step forward." 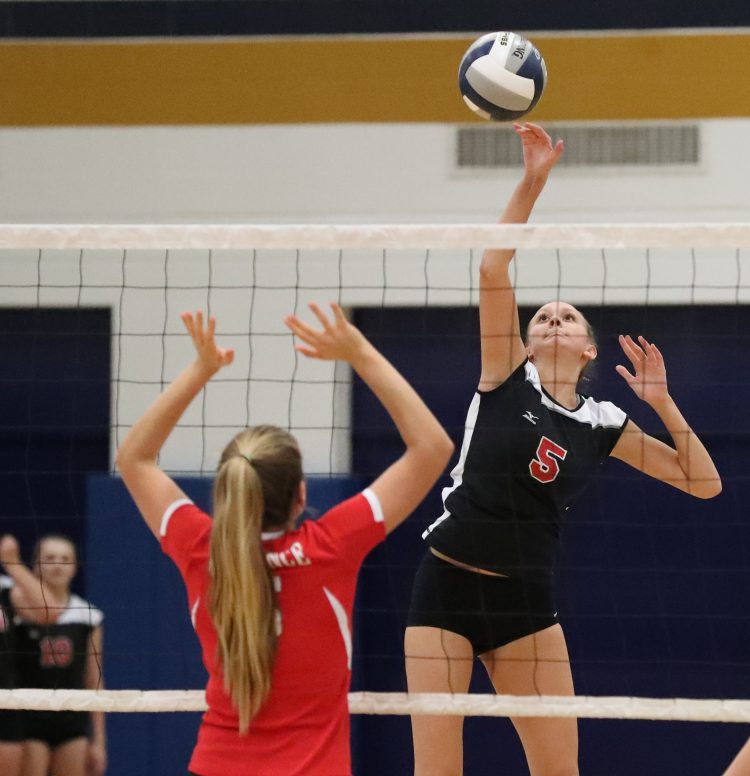 Lancaster, which shared the division title with Clarence last year but lost to the Red Devils in the sectional finals, features returning All-Western New York pick Julia Kurowski. The fifth year starter who has verballed to Colgate is expected to lead the offense as setter and finisher.

"She's one of the reasons we'll hopefully be powerful this year because she can do it all," Legends coach Becky Edwards said.

Kurowski won't be alone in Lancaster's quest to win its first sectional title since 2007. Senior libero Katie Becht has been starting since her sophomore year. Sophomore Meghan Vona and junior Jessica Clark are youngsters with a chance to earn starting spots.

Orchard Park's charge is expected to be led by setter Elizabeth Chow and Abby Ryan. Chow led the Quakers in aces last season, while Ryan, a sophomore, led OP in kills.

Frontier is working hard so it can maximize its potential, according to longtime coach Debby Schruefer. The Falcons have several experienced players in the fold, including four-year starter Cami Duggan and senior classmate Shelby Simmeth, a three-year starter. Another three-year starter is junior Kennedy Izzo. Seniors Lexi Borello and Amanda Crafts also are returning starters.

Panthers on the hunt: Don't be surprised if the Panthers in the Southern Tier make some noise theoughout the season as reigning state Class D champion Panama and past state champion Portville return several key talents who could lead their respective Panther teams on long postseason runs once again.

Panama was the third straight Section VI Class D champion to go all the way and win states. The team before it to do so was current Class C-2 champ Portville, whose season ended in the overall Class C final to eventual state champion Eden.

The Panthers, who were the only team to take a set from Eden during its postseason run, return several key players – hoping to lead them to their third state final four in four years. They include returning All-WNY selections Beth Miller and Sydney Colligan, both juniors. They along with senior Haley Unverdorben are among the holdovers from the 2015 state championship team. Sierra Keim and Brooke Decker are other returning starters for Portville, which won the Clarence and Williamsville East tournaments last year.

"We're working hard," coach Kelly Unverdorben said. "We're a very small team. There's a lot we have to think about when we run practice and things we're going to have to work a little bit harder on because we're not a big team but we'll work hard at it."

Both Panthers teams meet in a nonleaguer Sept. 29 at Portville.

Around the courts: Hailee Herc succeeds Stephen Pierce as coach at Eden, which has won eight straight New York State Public High Schools Athletic Association championships. The name Herc should sound familiar because she is an alumnus of the school and its powerful girls volleyball program – helping the Raiders win three state titles during her scholastic career -- including her senior season in 2009, which started the Raiders' current run of consecutive state titles. Herc went on to play at Stony Brook and had been an assistant coach the last three years at Cortland State, where she earned her masters' degree. She currently teaches at Gowanda, which is roughly 10 minutes from Eden.

Borkowski is one of five returnees for Kenmore West. Another Blue Devil to keep an eye on is junior setter Samantha Veronica. She's been starting since freshman year.

In the Niagara-Orleans League, Roy-Hart is among the teams that will look to challenge defending champion Akron. The Rams, who lost in the Class B-1 semifinals last year to eventual champion Alden, have eight returnees led by Olivia Vorholzer.

Who will win Prep Talk Player of the Year? Slade, Kurowski, Carter, Miller and Bowen are among what should be a healthy group of contenders.

#PrepTalkPreview: Girls cross country – Will it be (another) big season for East Aurora?

#PrepTalkPreview: Girls swimming – The tradition continues for the Sapios of OP