A former Episcopal church at the corner of Linwood Avenue and North Street may become affordable senior housing after all, if the nonprofit religious developer can overcome concerns from the nearby neighborhood.

Nearly three years after its original plan was rejected, the Episcopal Community Housing Development Organization has again proposed to convert the former Church of the Ascension at 16 Linwood Ave. into 28 senior apartments.

That's a similar concept to what was put forth in 2014. This time, though, the design has already been approved by the National Park Service as a historic preservation project. That was a major hurdle previously, since the site is a national, state and local landmark, and the developer is seeking state and federal historic tax credits. The Park Service demanded design changes from the last iteration.

Even so, the Episcopal group is already facing pushback from some in the Linwood neighborhood, as well as from local preservationists.

Residents attending a community meeting with the developer at the 20th Century Club on Aug. 17 criticized the design and other features of the $7 million project. Meanwhile a representative of Preservation Buffalo Niagara questioned if it was the best plan for the neighborhood.

"We had a wide-ranging discussion with members of the community," said Phil Pantano, a spokesman for the Episcopal Community Housing Development Organization, which is part of Episcopal Church Home & Affiliates. "It was a forum for neighbors to ask questions and provide feedback to the Diocese and the development team, which they did. The development team will review the feedback."

The proposed new units – including 25 one-bedroom apartments and three two-bedroom units – are aimed at people ages 55 and older who are living on fixed incomes. Eligibility would be set at 50 to 60 percent of the area median income. The Episcopal Diocese is seeking state low-income housing tax credits to support the financing.

The apartments would be constructed in the basement of the church, the existing parish house designed by E.B. Green, and in a new building that would be erected on the west side of the property, toward North Street. The church sanctuary would be reserved for a future community use to be determined by the Diocese.

Formal plans have not yet been submitted to the city for review, but Pantano said that's expected in the fall. 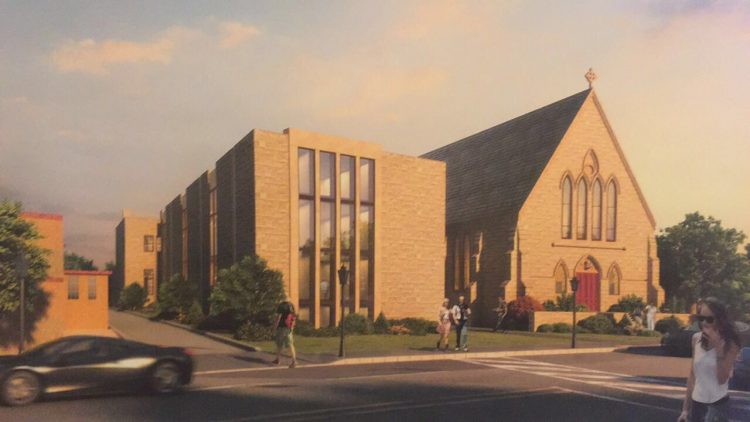 A rendering with another view of the proposed senior housing project.

The neighbors said they preferred to see market-rate housing and no new construction on the property, also citing parking as a concern. Residents previously objected to the elimination of some green space on North and complained that the new construction would block the view of the E.B. Green house.

However, church officials told residents that they need at least 25 units in the project for it to be financially viable, and they noted that they are restricted from doing too much within the church because of its historic status.

They also cautioned that making too many other changes to the design could also pose new challenges, because the Park Service and SHPO have already signed off after the developer adjusted the plans to win their approval.

Pantano said officials "know parking is going to be a concern," so they're talking to a nearby property owner about leasing some parking spots. Those discussions are pending, he added.

Pantano said the redevelopment project unites the Episcopal Diocese's mission and desire to give the church new life instead of selling it to a private owner, while also meeting an unfilled need for more affordable housing in Buffalo. At the same time, officials saw an opportunity to retain the sanctuary space for future public use.

The historic building has been vacant since January 2015, when the 164-year-old church congregation moved to the Church of the Good Shepherd at 96 Jewett Parkway, where it shares space.

The property will still be owned by the diocese, but the redevelopment will be led and managed by the community housing division of Episcopal Church Home & Affiliates. Founded in 1984, that division owns or manages 203 apartments at four properties, including Canterbury Gardens in Wheatfield, St. Paul's Place in Angola, St. Mark's in Buffalo's Riverside neighborhood and Shaarey Zedek Apartments in Amherst.