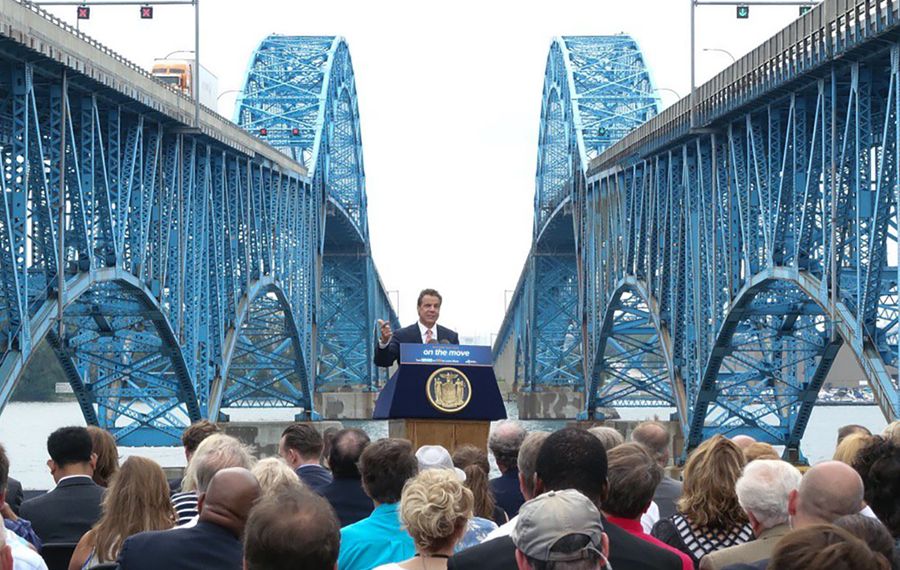 The Grand Island tollbooths are going away, but not the $1 fee.

Gov. Andrew M. Cuomo on Tuesday announced in Grand Island the state's plan to convert the current system of tolling into an automatic, cashless system. The automatic system was recently put into place on the former Tappan Zee bridge and will be operational at the Grand Island bridges by the end of March 2018. It will be the first cashless tolling system in upstate New York, said Cuomo.

Cashless tolling is not a free pass. It allows the state Thruway to hold onto the revenue from the Grand Island bridge tolls, about $23 million a year, according to the agency, while allowing vehicles to cross the bridge at full speed without slowing down. Cameras will capture the E-ZPass tags or license plates of passing vehicles. A bill will be sent to registered vehicle owners without an E-ZPass tag every 30 days.

Cuomo announced previously that Grand Island, with its location between the cities of Buffalo and Niagara Falls, will be the host for the state's new multimillion Welcome Center, which will be fully funded by the state and located on state-owned land along the I-190 off of Whitehaven Road.

Ending the bridge delays is an important piece of connecting Buffalo and Niagara Falls, said Patrick Whalen, director of the Global Tourism Institute in Niagara Falls.

"This is a monumental change. Those tolls have been exactly the same for 80 years – there's been people out there collecting money. This is the first significant change in 80 years, and that's a big, big deal."

Tuesday, the governor gave McMurray credit for the change.

"We are here because Supervisor Nate McMurray made a great case to remove the Grand Island toll barriers," the governor said.

McMurray said that when he campaigned to tear down the tolls, people laughed at him. He credited a grassroots effort that garnered bipartisan support and then took on a life of its own.

"It just shows you that by working together you can do anything," said McMurray.

Rep. Brian Higgins was not invited to the press conference, but said he did not feel slighted, as it was his role to challenge state bureaucracy. He also praised McMurray's efforts.

McMurray said of Higgins, "He deserves all the credit in the world for getting behind this early."

In a news release, Higgins praised the shift to cashless tolls.

“The tolls are a physical barrier choking off economic opportunity for Grand Island businesses, driving up emissions that pollute the air in municipalities that are home to some of this community’s greatest natural resources, and creating a daily hassle of backups for residents and all who drive through the town," Higgins said in the statement.

“This is another victory for Western New York that many thought wouldn’t happen in our lifetime, but one that again demonstrates the great outcomes possible when this community works together and stands up for itself.”

Brian Michel, who led the grassroots effort, echoed McMurray. Michel established the WNY for Grand Island Bridge toll barrier removal page on Facebook, which has garnered 7,500 signatures for its online petition in the past year.

The Lewiston resident said that he was prompted to reach out to McMurray after being stuck in a traffic jam on the bridge and said that "even the average Joe" can make a difference if he sets his mind to it.

"There were a lot of long nights, countless hours writing letters, meetings and phones calls and really bringing the community together in solidarity behind this," said Michel. "It's very gratifying to see that the people have not been forgotten and our voice has been heard."

Town of Tonawanda Supervisor Joseph Emminger said he has fought against the tolls and idling traffic emissions that affect Tonawanda residents.

Whalen, who organized the first meeting to push for the toll removal said that McMurray and Michel "really ran with the idea."

Whalen said that Michel, as a citizen, had no ties to politics, which ultimately worked in his favor.

Michel was celebrating his win Tuesday, just days before his wedding on Saturday.

"It's been a very good week," said Michel of the early wedding present from the governor.