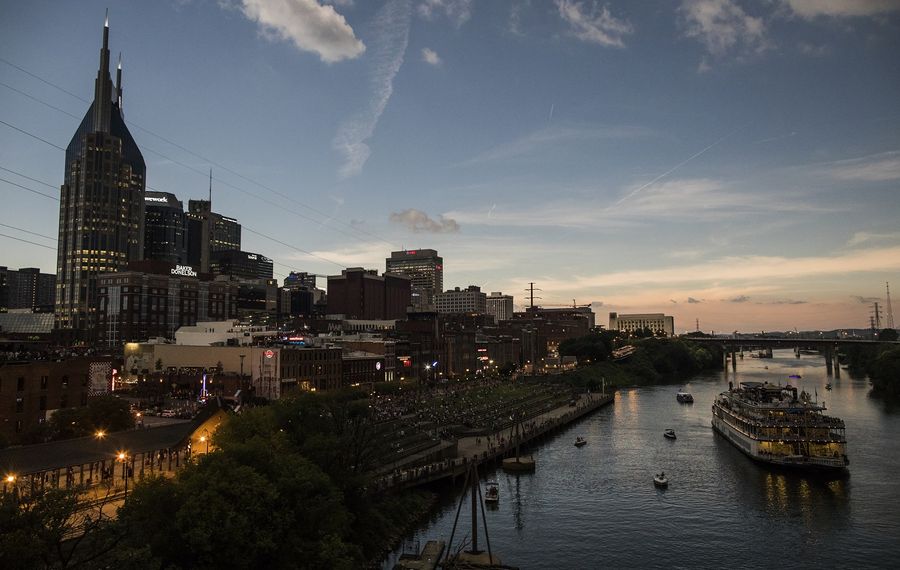 In appropriately named Sunbright, Tenn., the Beatles' "I'll Follow the Sun" blared from the car speakers, instantly becoming the Eclipse Day theme song. En route to Frozen Head State Park in Wartburg, a site that promised 100 percent totality during the eclipse, the question arose: Are eclipse enthusiasts following the sun or chasing the moon?

The band of moon shadow that traipsed across the nation hit the state of Tennessee and ended its eastward path in Etowah, hitting Nashville full-force. Frozen Head State Park in Wartburg promised open fields for viewing in a part of the state teeming with national and state parks.

It was a straight southern drive from Buffalo to Somerset, Ky., to a Best Western Hotel. The hotel, according to manager Ameet Patel, is not usually full on a summer Sunday, but all 61 rooms had been booked; two were no-shows. This a hint at the enormity of the eclipse travel scene happening across the country.

In the hotel's complimentary breakfast room on Monday morning Cris Letourneau of Pickerington, Ohio, was quietly eating a waffle. Her husband was in the lobby reading while their 19-year-old daughter was still sleeping.

"This is their trip," he said. "They've been planning this since she was 8 years old. We're watching the eclipse in Sparta, in a cornfield."

Frozen Head, according to ranger David Brady, is named for its highest peak; at 3,324 feet it is, during spring and winter months, sometimes covered in white ice and snow. Park ranger Joe Nowotarski said park administrators at the central office in Nashville wanted to ensure that plenty of ISO 12312-2 paper filtering lens glasses were available for one and all. Four hundred were available, and about 250 were handed out to all attendees.

Waiting for the eclipse to begin at 1:03 p.m., many lounged on chairs, played with their dogs, or tossed a Frisbee. Greg Quesenberry and Julie Guthrie had both driven 300 miles from Blacksburg, Va., and had taken off from work for the day. 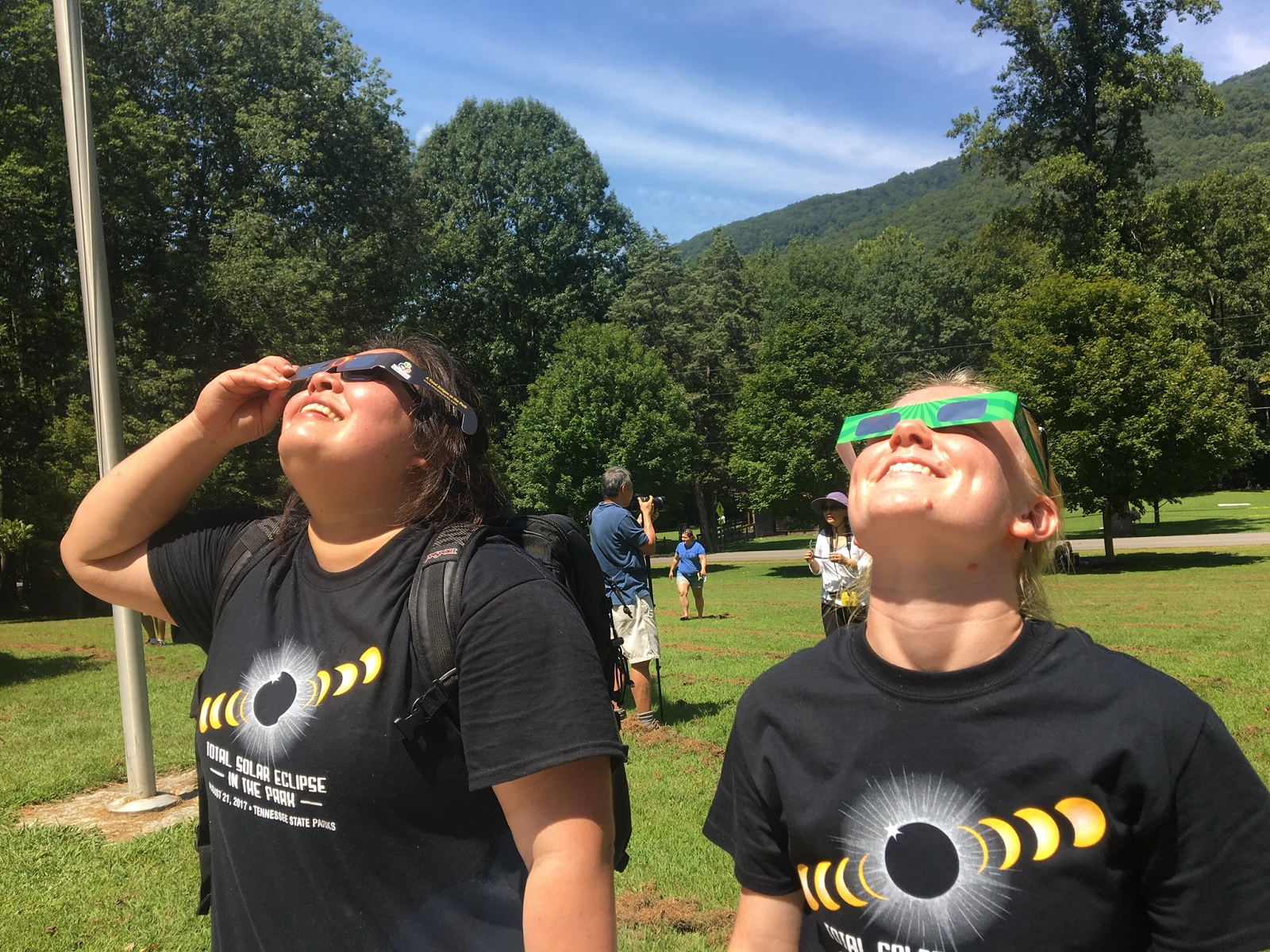 "When we arrived at the park we wandered around, and there is a sign down the road that says, 'Now leaving the zone of totality,' so we plan on watching right here in this field," Quesenberry said. He planned on capturing totality with his GoPro and, after some modifications with extra pairs of viewing glasses, seemed happy with the results.

Brady said more than 200 had registered for to watch the eclipse, but they expected far more to show up.

Hillary Wilson Yue, a paramedic, drove from Richmond, Ky., after her shift to see the eclipse at Frozen Head. This was her first time at the park.

"My parents are both teachers and astronomy buffs. They named my brother Rion after the constellation Orion," she said. "They encouraged me to see the eclipse."

During the beginning of the eclipse she called her parents (who live in Hawaii, her home state), to let them know that C-1 – the first stage of totality – had begun.

She said she was "hoping to see shadow bands" and spread out a white sheet to capture the phenomenon that appeared as reflections. She also wanted to see Baily's Beads, the phenomenon of seeing the bumps of the moon, and the diamond ring. "Diamond ring," Wilson Yue explains, "is the light flares on either side of the sun, visible before and after totality, it looks like a diamond ring on its side."

She got her wish about the shadow bands, and it was indeed incredible to watch, flickering on the sheet. After totality, they switched their wiggling direction, something that, she says, even NASA doesn't yet understand.

As we spoke, Jonathan Gordon of Batavia, Ohio, set up his Celestron Newtonian, as well as his DSLR, both outfitted with appropriate filters to shoot the eclipse. After some technical problems, he captured stunning images of it all. 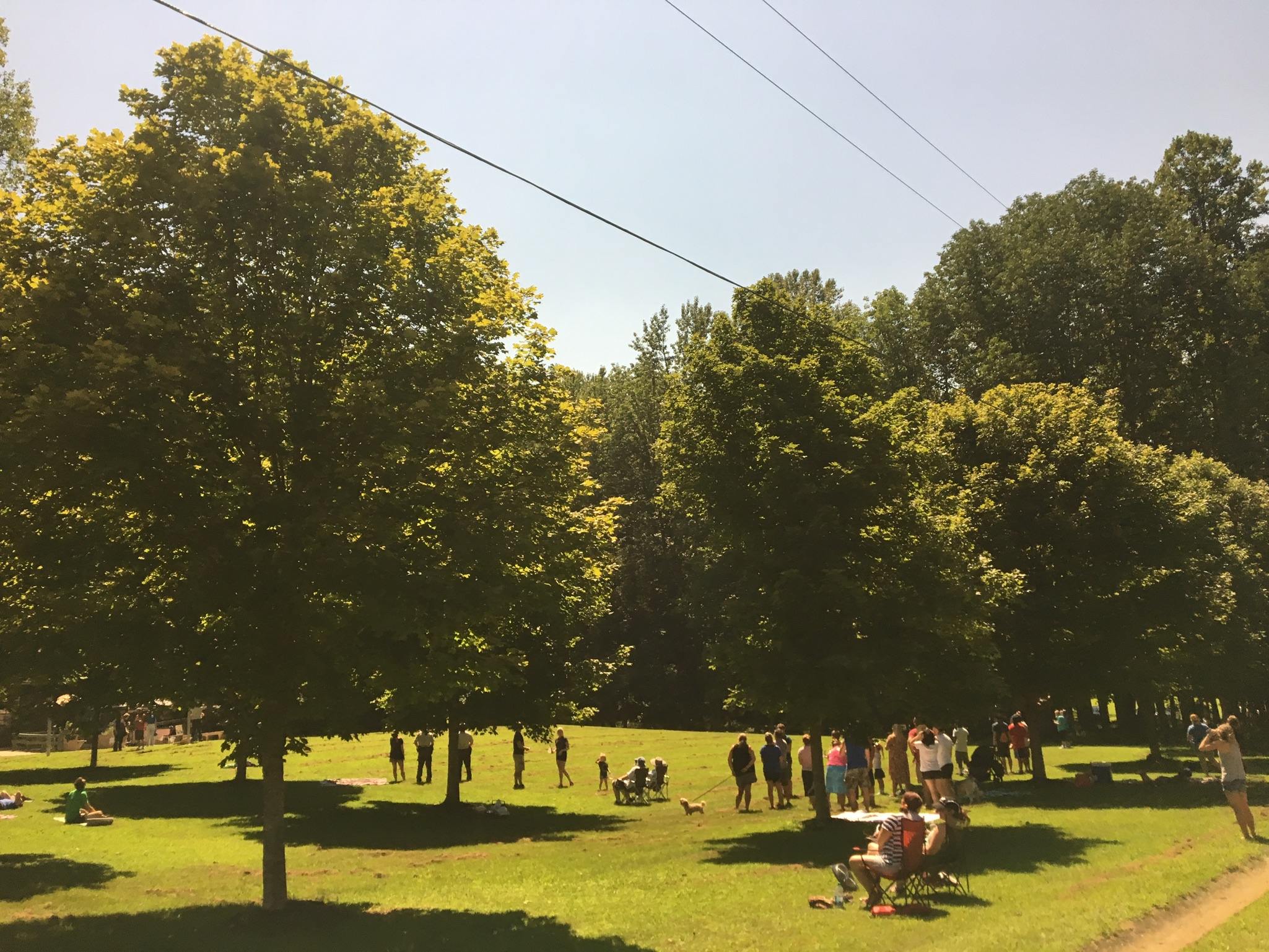 As totality approached, goggled eyes looked at the sun, noting the ever-widening dark sliver. The sky became discernibly darker to the west, a twilight effect. With every minute, the light darkened and the temperature dropped. Stars and Venus became visible.

Totality at Frozen Head, the actual moment of true and deep darkness, lasted less than 30 seconds. During totality, screams filled the air. The noise was so loud that it was impossible to tell if, as the park rangers said, wildlife would be stunned and silenced.

After totality, twilight returned to the sky, lasting for well over an hour. As we drove east, the light remained an eerie blue.

So was it worth a 12-hour drive? Absolutely.

This phenomenon will come to Buffalo on April 8, 2024. Travelers who love astronomical adventure will be heading to our city, our parks, and our fields to bask in an eerie light.