The area’s best player won’t play: Wang, who would’ve played for Williamsville North as a freshman, has opted to play with the USTA instead of at the high school level, North head coach Cris Kessler said. Her brother, Prep Talk Player of the Year Harry Wang, who graduated this year, did the same when he was a freshman, Kessler said. What will likely happen is Wang, who played high school tennis in seventh and eighth grade, will play USTA ninth, 10th and 11th before returning to play her senior season at the high school level.

“I can’t even get into all the reasons because there are too many, but I don’t agree with it,” Kessler said. “It just is what it is. I feel bad, but that’s that.” 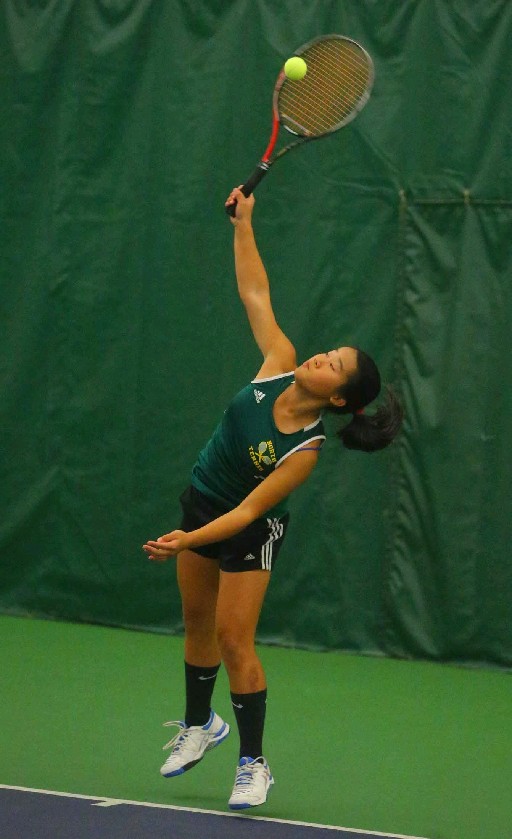 The area’s second-best player might not play either: Orchard Park’s Madigan Humiston, who lost to Wang in the Section VI and ECIC singles finals, will probably opt for the same route as her friend Wang, OP head coach Terry McMahon said. If that’s the case, he’ll rely on Karoglan to step into the top singles spot if she doesn’t go the same route - McMahon said she’s friends with both Wang and Humiston. OP would have Jesse Hollins, the 2015 Section VI singles champion, but she didn’t play last year for the same reason and will likely do the same this year.

“My view is you should win sectionals and then go to states and if you do that then USTA. Madigan was on the bubble so I think she’s gonna go to USTA,” McMahon said. “This is sort of just the new wave, it’s just the nature of the beast.”

So who steps up for Williamsville North?: The virtual lock at No. 1 is Kessler’s daughter, Courtney. She’s a sophomore and has played varsity since seventh grade. She finished 10th at states last year in doubles and will likely be one of the top singles players in the area.

“She’s been to states, she’s been to sectionals, she’s had a winning record since seventh grade,” her mom said. “Her strengths would be her serve and her forehand. She hits the ball hard.”

Williamsville North also graduated Erin Lippa, who went to states three times. The Nos. 2 and 3 singles spots are up for grabs, and are likely to be occupied by senior Julia Behar and junior Emily Segal. Others who could factor in after starting at one point last season are Cailey O’Connell, Tori DiVincenzo and Supriya Pandit.

“It’s a little bit of a rebuilding year because we lost four starters,” Kessler said. “I feel like I have some really strong candidates for the two and three singles spots and doubles. There’s gonna be a lot of fighting for those positions.”

What about Orchard Park?: Karoglan was half of last year’s Section VI doubles championship team and will slide into the top singles spot if she stays. Zoe Watson will be a likely No. 2, but McMahon and his team just started practice so he doesn’t have a concrete ideas of how his lineup will shake out. He certainly didn’t seem too thrilled will the departures and the potential of his team compared to last year.

“We’re kind of young. I don’t have a lot of expectations,” McMahon said. “We’ll have to see. I think the top two players (Humiston and Hollins) are not gonna play. They’re playing USTA and the third person graduated, so I think it’ll be a rebuilding (year).

“We have like 27 girls or something,” McMahon said. “ … we’ll see who played over the winter time.”

They’ll still be two of the top three teams in the league: The traditional WNY girls tennis powers will still be just that, even with watered-down rosters. Lancaster will likely sneak into that elite tier with Williamsville North and Orchard Park, with the latter two depleted after dominant 2016 seasons.

Double the fun: Both halves of the No. 1 Southwestern doubles team return this year after a third-place finish at sectionals last year. Mikayla Johnson and Olivia Persia defeated Lancaster's Katelynn Budzich and Alyssa Kranz (7-6, 7-5, 6-0) last season. Johnson will be a junior and Persia a senior.

Lancaster comes off historic year: Orchard Park had won 12 straight ECIC Divison I titles before Lancaster knocked the Quakers from the throne last year. The Legends graduated Tina Stasiuk from first singles and Katelynn Budzich from first doubles, but the likes of sophomore Paige Szymusiak should fill the void to help Lancaster contend once again under head coach Steve Insinna.

#PrepTalkPreview: Girls cross country – Will it be (another) big season for East Aurora?

#PrepTalkPreview: Girls swimming – The tradition continues for the Sapios of OP