The state and Senecas have been at an impasse since the tribe earlier this year said it was halting payment of some $110 million a year to the state, which shares proceeds with localities in 16 Western New York counties. The tribe said the terms of its original 2002 compact is silent about any annual payments after the compact’s 14th year, which ran through the end of 2016.

“If they don’t fulfill their obligations to continue payments and to honor the compact, we are going to pursue putting an additional casino in Niagara Falls,’’ said a Cuomo official, speaking on condition of anonymity, on Monday.

Late Monday afternoon, the scope of the dispute shifted when the Cuomo administration said a meeting between the governor and the Seneca president is unlikely soon.

Spectrum News reported that the Erie County District Attorney’s Office has been investigating the discovery of a listening device sometime last year by New York State Gaming Commission officials in an office the agency leases from the Senecas at its Buffalo casino; the agency has regulatory oversight of casinos in New York and has staff at every Native American casino in the state. A source with direct knowledge of the investigation, who spoke on condition of anonymity, confirmed to The Buffalo News that the device was discovered about a year ago.

“Given the publicly reported and verified criminal investigation in the Seneca Nation that commenced approximately a year ago, it would be inappropriate for the governor to meet with the Seneca Nation until the matter is resolved by the Erie County District Attorney,’’ Alphonso David, Cuomo’s counsel, said in a written statement.

Seneca President Todd Gates pushed back late Monday. He said he and Cuomo were due to meet in Niagara Falls on Tuesday but that Cuomo scuttled another meeting “over a completely unrelated legal issue” involving an employee at the Seneca Gaming Authority.

“Let me be clear, the allegations against the Seneca Gaming Authority employee have as much to do with the compact issue as the many ongoing investigations into Gov. Cuomo's economic development programs. Let's not distract from, nor try to politicize, the fact that Gov. Cuomo has now canceled two meetings with the Seneca Nation regarding an issue that is important to the people he was elected to represent,’’ Gates said. He referred to upcoming federal court trials involving people connected to Cuomo’s Buffalo Billion program. 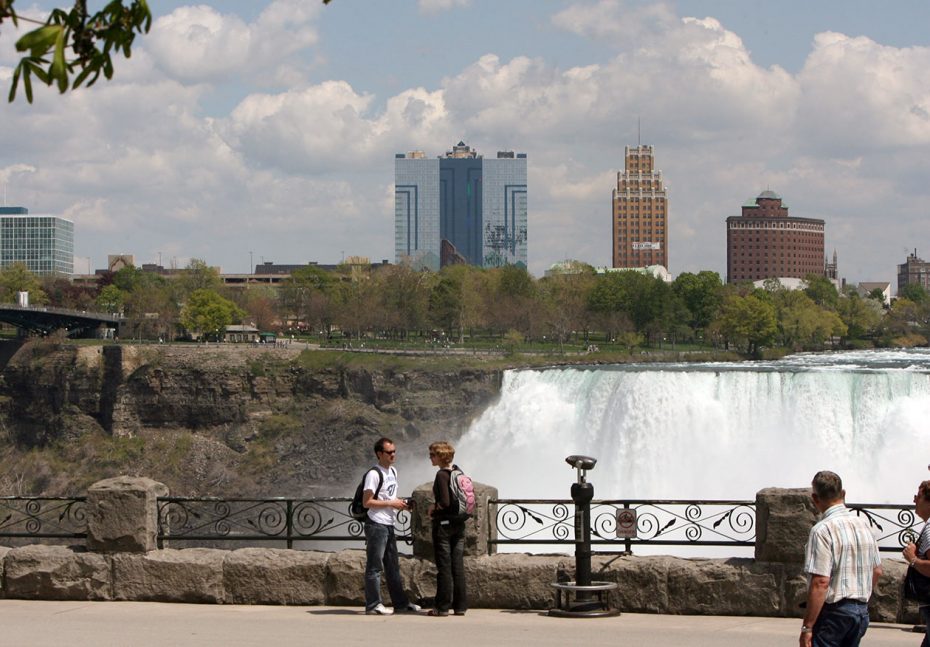 Seneca Niagara Casino – a prominent part of the skyline of Niagara Falls, N.Y., as viewed from Canada – is the Seneca Nation's most successful casino. (News file photo)

Gates said Cuomo has shown a “blatant disregard” for the compact and the jobs Seneca casinos have created.

“The governor should spend his time trying to figure out how he will fulfill the state’s continued obligation under the compact to provide payments to the local governments rather than continuing to seek ways to discredit the Seneca Nation,’’ Gates said.

The Seneca Nation, in response to the Niagara Falls casino threat by the governor, accused Cuomo of grandstanding in public instead of negotiating with Seneca leaders to address the problem.

Cuomo personally delivered the same threat in 2013 at a time when the Seneca Nation had for several years withheld hundreds of millions of dollars in revenue-sharing proceeds from its three casinos in the region. Cuomo and Seneca leaders that year eventually resolved the dispute, with the state agreeing to tighten enforcement of a large geographic exclusivity zone in which the Senecas can operate without new casino competition.

The tribe’s most successful casino is located in Niagara Falls, and its annual payments to the city government amounts to 15 percent of Niagara Falls’ operating revenues. A Wall Street firm recently downgraded the city’s credit rating because of the loss of the Seneca proceeds.

The financial impact of the current dispute began being felt in July, when the Senecas skipped a quarterly payment that the state insists was due.

The pace of talks between the sides has been slow. Cuomo and Gates have yet to meet face-to-face. The two men were supposed to get together several weeks ago, but Cuomo canceled.

The sides have yet to begin the formal process that could take the disagreement to arbitration. Such a route could take years to resolve and would then likely end up in a federal courtroom. Municipalities that rely on the funding — from counties and cities to school districts — have been urging Cuomo and Gates to figure out a way to fix the matter.

On Monday, the Cuomo administration ratcheted up the rhetorical battle with the Senecas. It came a day before Cuomo is due to be on Grand Island on Tuesday for an infrastructure-related announcement, according to people who have been invited.

“We believe if they don’t pay, the compact is null and void," the Cuomo administration official said of the original 2002 legal agreement that permitted the tribe to open its casinos. “As a condition of that compact, they get exclusivity and if they don’t honor their end we’re going to explore how to put a casino in Niagara Falls."

The Seneca Nation, which insists the compact is in effect until 2023, brushed aside Cuomo’s threat and said the compact's provisions support the tribe’s decision to end payments to the state.

The Senecas slammed Cuomo for avoiding a meeting with Gates to discuss the situation. “Today, on the eve of his latest visit to Western New York, the governor is turning to threats against the thousands of local jobs the Seneca Nation’s gaming operations have created in Western New York," Pantano said of the dispute.

“For the state, public insults, canceled meetings and threats seem to win out over productive dialogue," he added.

Beyond whatever litigation the Seneca Nation might pursue if the state sought to add another casino in Niagara Falls, there are some other hurdles. First, the casino gambling market has become saturated in upstate New York. Three commercial casinos have opened since late last year, adding to a market that already includes racetrack-based casinos, Native American casinos operated by three tribes and a host of other gambling options.

Given the gambling revenue declines the Seneca Nation has seen in Niagara Falls in the past several years, it remains to be seen whether a private developer might be interested in building a new casino in the city.

Further, the state has already awarded all four licenses for upstate casinos that were made possible by the statewide constitutional referendum in 2013 that permitted a new round of casino expansion. The final three casino licenses can’t be awarded for several years, and casino operators have already been hoping they would be awarded in what the industry considers the gambling prize land: New York City, where only one casino is now located.

Under the terms of the original compact, the Senecas turn over 25 percent of slot machine revenues at its casinos; the state keeps most of it and provides an allotment from two different pots — estimated at some $35 million annually — to the municipalities.