The walkway on the Peace Bridge shut down this month. It's being replaced and improved as part of an extensive $100 million rehabilitation of the bridge, and the walkway won't reopen until 2019. One of the highlights for those on foot will be a new observation deck, high above the Niagara River.

Sam Mancuso, 57, remembers getting a look at the old walkway that was a little too close and personal. He grew up on Fargo Avenue, on Buffalo's West Side. As a child, he used to ride his bicycle back and forth as a casual deal. He was well familiar with the old "Baby Hole," a beach in Fort Erie a few hundred feet north of the Peace Bridge, a beach that has taken on iconic status for Buffalo natives who recall it as a routine haunt from childhood.

Mancuso's most vivid memory is of a summer day in the early 1970s. He and some friends were riding their bikes across the bridge, just beginning the cruise down the long stretch toward Canada. Workers had left their tool chests on the walkway. Mancuso didn't see them. He was admiring a twirling whirlpool that had formed in the river, far below.

His bike collided with the tool chest. He went head-over-handlebars. Mancuso suffered a concussion and plenty of bruises, and he ended up in the old Columbus Hospital on Niagara Street, though he knows he was lucky.

Thrown in a different direction, it could have been a long drop to the river.

That did not stop him from going across the bridge again.

"It was part of normal everyday life to go there," wrote Mancuso, now of Seattle, in an email.

Do you have childhood memories of casually crossing the Peace Bridge? If so, share them with Sean Kirst in the comments below, or by emailing him at skirst@buffnews.com. 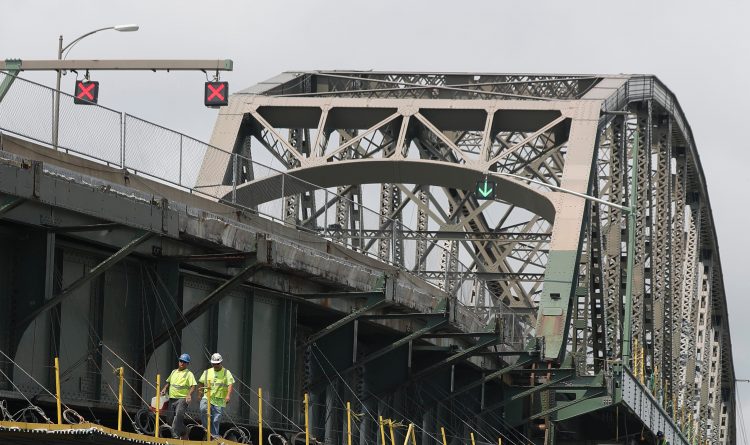 To the best knowledge of Christopher Bonn, administrative supervisor for the Peace Bridge Authority, this is only the second time in the history of the bridge, dedicated 90 years ago this month, that the walkway has been closed for any significant duration. From 6 a.m. to 11 p.m. every day, until it reopens, walkers and bikers can follow signs that allow them to call for a shuttle from access points in both Buffalo and Fort Erie.

Orion Graham used the shuttle Friday. His path to the bridge was a 21st century journey. He is a civil engineer from Washington, D.C. He was going to Toronto on business. He did not want to pay the fees involved with taking a rental car to Canada. 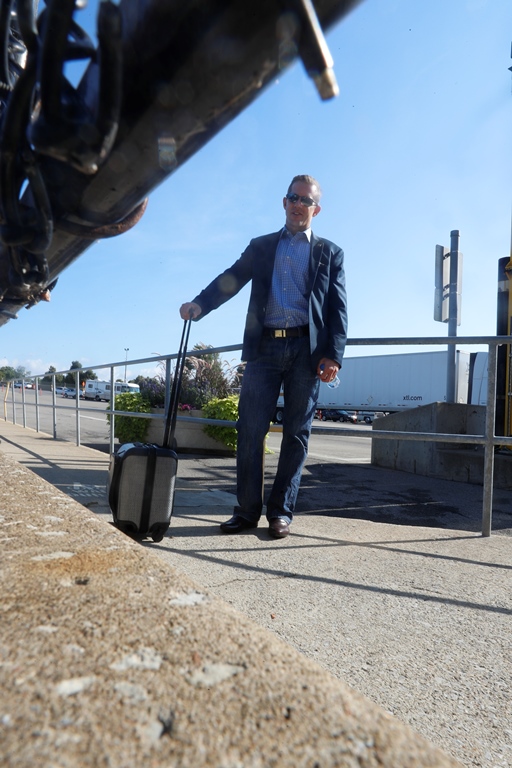 Orion Graham had planned to walk across the Peace Bridge when he discovered the bridge is closed to pedestrians. (John Hickey/Buffalo News)

So Graham used Uber to travel from the Buffalo airport to the bridge, then called for the shuttle to deliver him to a rental car, on the other side.

He had planned to walk across the bridge and didn't know the walkway was closed.

"It's a lot more expansive than I thought," Graham said, looking at the bridge.

Any child of the old West Side could have told him that step-by-step truth about a bridge that's roughly a mile long. Before this age of worry about terrorism, concerns that triggered far tighter security at the crossing, boys and girls who grew up in nearby neighborhoods in Buffalo saw the Peace Bridge and Canada as part of their childhood landscape.

"It was no big thing," said Bob Higgins, 66, a retired schools custodian in Cheektowaga who lived as a boy on Plymouth Avenue.

He and his friends were going over the bridge when they were 7 or 8. They'd tell their parents they were bound for Centennial Pool, on Porter Avenue. The customs workers used to ask, distracted, where the children were headed.

"Swimming!" the boys would shout, before whirling past on their bikes.

"My parents worried about me crossing Niagara Street," Higgins said. "If they knew I was crossing the Peace Bridge, I wouldn't be talking to you right now."

He and his friends would acquire firecrackers in Fort Erie, then smuggle them home by stuffing them inside the headlights on their bicycles. Like generations of West Siders, they swam at the now-gone Baby Hole, the Canadian beach that was a regular destination. The danger was the current, which became treacherous for anyone who ventured out too far.

"We loved it, but it could be dangerous," said Geralyn Rose Patrizi-Coones, 61, now of Holland.

As a young mother on Bird Avenue, she often rode a bicycle across the Peace Bridge to the Baby Hole with her toddler son, Jason, strapped to a child's seat. She remembers how her family tied a rope around the waist of her little brother Paul to make sure he didn't get carried off while swimming at the Baby Hole.

The international extent of the childhood back-and-forth, by today's standards, is beyond imagination. A recent post by Marie Tomasello Marzuki on the "I am a product of the West Side of Buffalo, N.Y." Facebook group asked a simple question: "Who rode their bike across the Peace Bridge to get to Canada?"

The answers poured in by the hundreds. Many people remembered, as children and teenagers, crossing the bridge to buy hockey equipment or to play the game in Fort Erie. John Lachina, 73, recalled how he and a friend – at 12 or 13 – used to hitchhike on the Buffalo side of the bridge entrance as a fast way of getting across, then hitchhike again once in Canada. Maybe they would go to Crystal Beach. Maybe they would go to a place Lachina knew as Sunny Acres, an Ontario stable where they could enjoy some horseback riding.

His parents were friends with the owner. They trusted him. On weekends, long before the advent of mobile phones, Lachina and his teenage buddies sometimes – on a whim – slept in the barn.

The world changed, dramatically. After the Sept. 11, 2001, terror attacks, security became much tougher at what had been an extraordinarily relaxed border. Scrutiny of minors intensified. Aaron Bowker, a federal Customs and Border Patrol spokesman in Buffalo, said it's now "very rare" for someone younger than legal driving age to cross the bridge unaccompanied by an adult.

Bonn, the administrative supervisor, said the Peace Bridge still values pedestrians. More than 700 people walked across in July, before the walkway was closed, Bowker said. And Bonn said bridge officials hope walkers and bikers – with proper documentation – will embrace the new walkway once it's finished, especially to enjoy the spectacular view of the river.

Still, those who remember a more innocent, less anxious era sigh about traditions that are unthinkable today – such as the way bored boys and girls, looking for ways to kill long days during summer vacation, would fearlessly walk or bike from their crowded Buffalo neighborhood to cross a famous bridge into another country.

"I've always loved the West Side, but you can't do that stuff anymore," said Jeannette DiPalma, 63, who used to pack a lunch and lead her young daughter and a friend across the river, to the Baby Hole. "Sometimes I wish we could turn back the clock."

Sean Kirst is a columnist for The Buffalo News. Email him at skirst@buffnews.com, write to him in care of The Buffalo News at One News Plaza, Buffalo, 14240 or read more of his work in this archive.