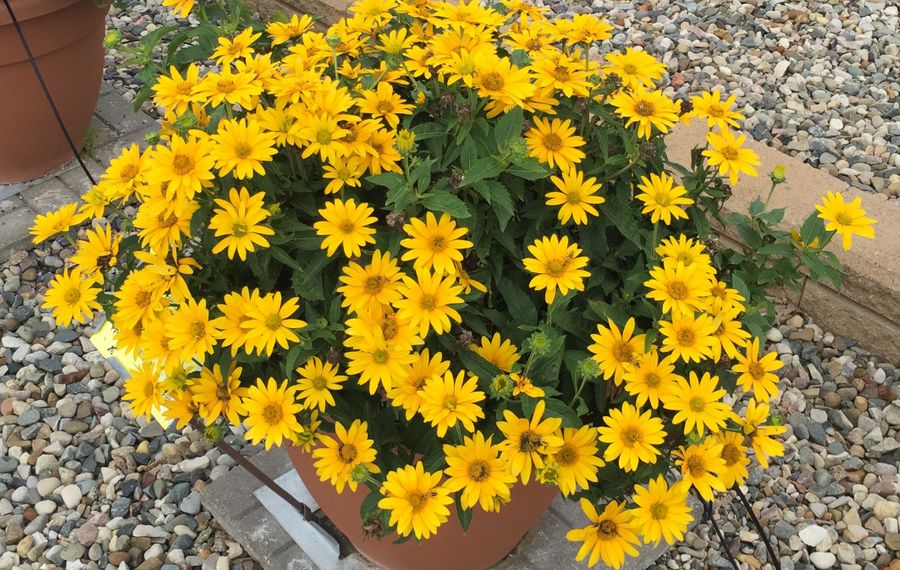 Some of the plants that showed off for our garden-peeping tourists and guests during July and early August are still going strong: tall Rudbeckia ‘Herbstonne’, daisies and perennial geraniums that were cut back, reblooming roses, and late daylilies.

I recommend a late summer driving tour to the garden centers of Western New York to see what else could be blooming right now in your garden, if only you had planted them last September or in May. There are probably many more choices than you imagine – for one reason: Most gardeners shop in spring (when “the fever” is upon them).

That increases the likelihood that the plants they choose are the ones that look promising just then. The later-blooming plants usually look like green stubs in their pots in June, hardly alluring. You need to see them now, in the garden center or in a garden, to appreciate what you too (and the pollinators) could be enjoying. All that are mentioned here are completely hardy in our entire region.

This native plant is the pollinators’ favorite. All week my two clumps have been covered will bumblebees, honeybees, flower flies, and more Hymenoptera species than I can identify. Even without that factor it is a handsome plant. Early in the season it is upright with long stems and small leaves with toothed edges and sharp points, creating a tidy impression. By August it grows to 4 or 5 feet tall, and the pink or white flowers open. They work well in a vase, and if you cut off the first flower stems the plant will flower more fully from its lateral buds.

Especially this year (with so much rain) I had to prop my Culver’s root, but that would not be necessary if I had remembered to cut it back once. It can be difficult for a garden center buyer to find this perennial in the trade, but some local shops carry it.

I discovered this 20 years ago in a Pennsylvania native plants nursery and put it in the corner of my vegetable plot, understanding that it would attract beneficial insects. It grew to 8 feet tall, and within a few years was a substantial vase-shaped plant about 8 by 5 feet across the top, with great purple flower heads about 7 inches wide. I’d hoped for this native to spread, which finally happened many years later – obviously it doesn’t take over field. Now the pollinators and I are happy to see scattered individuals 30 or 40 feet from the mother plant.

I’ve been encouraging nurseries to offer this plant so that you, too, can have one. If you don’t have a sunny back-of-the-border place for a well behaved giant, try the 3-foot cultivar called ‘Iron Butterfly’ – good for pollinators but not quite so impressive.

Anemones are a huge genus that includes spring bloomers – short, darling, pastel flowering plants that everyone should plant as tubers in fall. Here I am recommending the hybrids that bloom from late summer into October.

One hears two typical remarks: “Oh they spread too much” – in my view a good thing if you want a sea of dancing flowers in the late season; they are hardly aggressive. Or “Who would have a perennial garden without some of these?” I say that often.

In partial sun or shade they thrive; about 3-feet tall. (Full sun can wilt them if moisture isn’t abundant.) Their luminous flower petals (mostly white or pink shades, single or double-flowered) are sure to elicit an “Awww … " 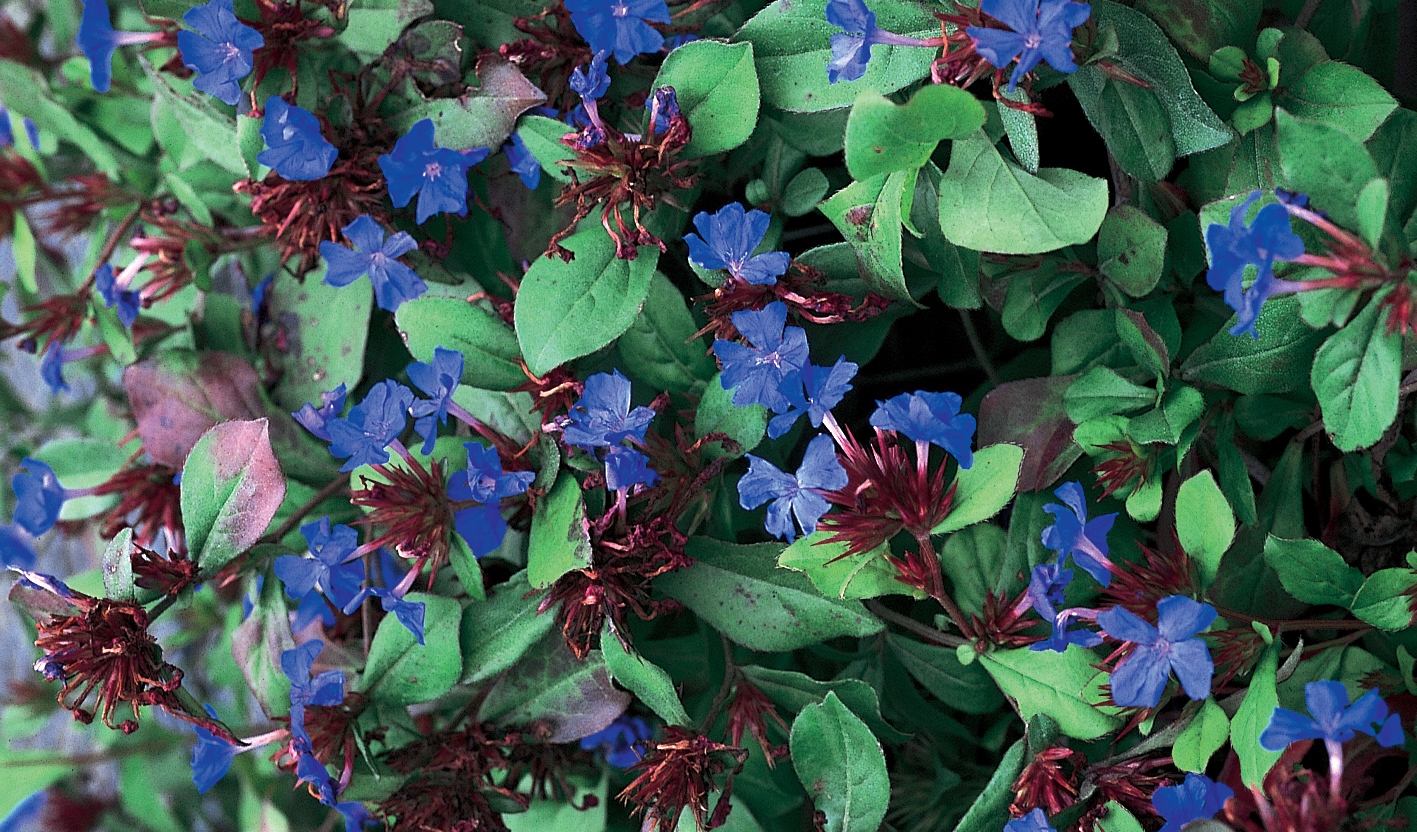 The name is a mouthful (to impress or drive away your friends) but if you ask for leadwort, who knows what you’ll get. If you call it “plumbago” you are likely to be directed to a beautiful tropical plant called Plumbago, with blue flowers. (Remember that the suffix “oides” means “looks like/ is similar to” and, indeed, the blue flowers recall plumbago.) The plant (by any name) is worth finding, as it makes a great non-aggressive groundcover or front edge of a garden bed in partial sun to partial shade.

In late summer the changing leaf colors are as stunning as the true blue flowers; they are patterned in cream, green, and blood red.
Two hints for success: In zone 5 areas (much of WNY), mulch them well in winter to increase the survival rate, and allow them time to emerge in spring before you declare them dead. (I mark such plants – including Asclepias tuberosa (butterfly weed) and Platycodon (balloon flower) – with chop sticks or tongue depressors so that I remember their locations in spring.)

This is a plant-person’s perennial rather than a showy, stop-the-car plant. It should be seen up close for its undeniable, intricate charm. The flowers open in the leaf axils and are mostly speckled – the reason most people figure it’s called a toad-lily. (Another explanation according to Armitage is that in the Philippines where it originated, the Tasaday tribe rubbed the juice from the flowers on their hands to help them catch frogs more easily.)

A few species may be found with a variety of flower colors including white with liver-spots and my favorite – yellow. Plant them in compost-rich soil, that holds moisture, in part shade or filtered sun.

So many I haven’t mentioned, both familiar and less so: In the fields the asters and goldenrods will show themselves soon. (Stop blaming the goldenrod on your hay fever. It’s ragweed that’s probably tormenting you.)

Native asters, goldenrod (Solidago canadensis), Joe-pye weed (Eupatorium), and Silphium (Rosin-weed, cup plant) offer some species or cultivars that suit the August/September garden or edge of the yard. Black-eyed Susans and their larger Rudbeckia cousins (R. maxima, R. laciniata such as ‘Herbstonne’) still look great.
And look at the yellow-orange flowers from all the cheery plants that start with “Hel”: Helianthus, Helenium, Heliopsis, Helianthoides.

So many late-summer plants, and just enough time to find them in a garden center!