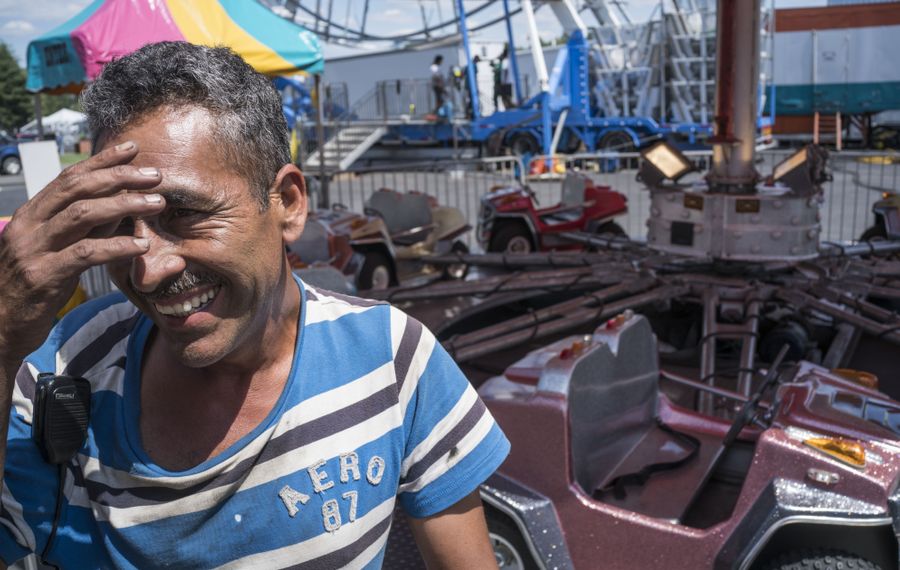 Help-wanted ads from one of the largest carnival operators on the East Coast failed to get a single call back for full-time jobs this year.

Fortunately for Strates Shows, Jose Melendez and other Mexican workers can be counted on.

The Mexicans make up about half of the full-time Strates Shows workers who set up and operate the rides. Most hail from either Durango or Tabasco, two Mexican cities 1,080 miles apart.

Melendez and his co-workers last week assembled the carnival's 65 rides at the Erie County Fair in Hamburg, and they will take them apart Sunday night.

There are carnivals in Melendez's native Mexico, but Melendez comes to the United States because the work pays more here.

"The peso to the dollar is much different, and it's why I come every year -- because you try to make it better for the family," said Melendez, who operates the Zyklon roller coaster. 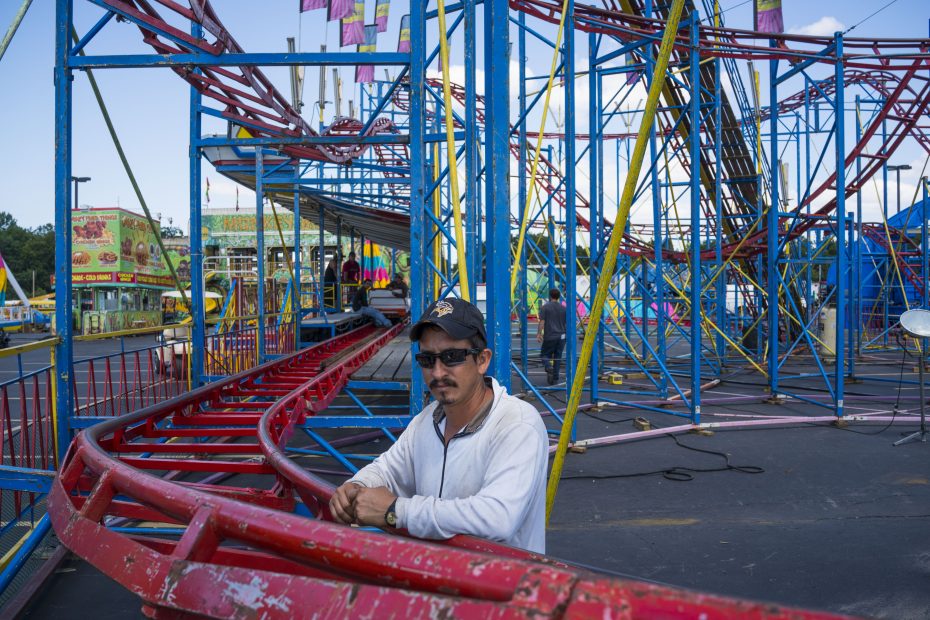 "The peso to the dollar is much different, and it's why I come every year - because you try to make it better for the family," says Jose Melendez, 33, of Durango, Mexico, who operates the roller coaster at the Erie County Fair. (Derek Gee/Buffalo News)

"The Mexicans are the backbone of my labor force," said James E. "Jimmy" Strates. "You'd be hard-pressed to find another group of people who work this hard, and it doesn't matter whether it's raining or snowing, or if there's lightning."

Carnival officials are wary of an anti-illegal immigrant mood in the country that could lead to stricter limits on how many foreigners can enter the U.S.

Strates said American workers who have been with him a long time are just as hard-working as the Mexicans. It's just that he can't find enough of them. Carnivals are hard work and require long absences from family and friends.

Mexicans aren't taking Americans' jobs, and they are getting a bum rap, said Strates, an ex-Marine fighter pilot.

"If Trump wants to build a wall, I encourage him to take a bunch of Americans who don't want to work and throw them over the wall so they can't get back in," he said.

General Manager George Weston Jr. looked out on the rides being assembled at the fairgrounds, two days before the fair's opening. It's a scene he has seen hundreds of times in his 41 years working for Strates Shows.

As Weston walked around, Mexican workers touched up one ride with a coat of paint, and fortified another by attaching steel braces for support.

"All they are are big erector sets that you put together," he said.

The carnival typically sets up in one location for 10 days. In a two-week cycle, workers assemble the rides, put in long hours during the length of the show, and stay up immediately after it closes to take down the rides and load them onto the carnival train for the next destination.

After being driven to the next fair location and getting sleep, they assemble the rides again and operate and maintain them through the fair.

Strates Shows operates the nation's last carnival train -- for rides and equipment only -- and is the long-standing carnival operator at the Erie County Fair, one of its 23 stops during the year.

The Mexicans are able to enter the United States with H-2B visas granted to unskilled, non-agricultural workers. 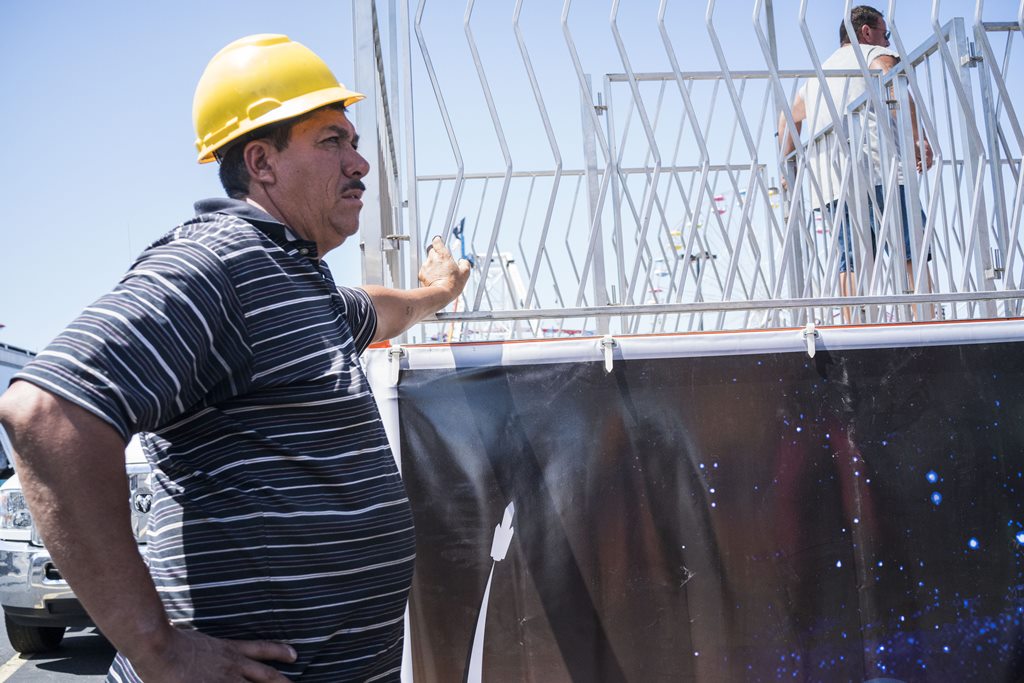 "Sometimes you go six or even eight months not seeing your family," says Simon Pedro Batres, of Durango, Mexico, who operates the Journey to Mars attraction at the fair. (Derek Gee/Buffalo News)

Batres, who has worked for the carnival since 2000, said it is hard to be away from his wife and five children for months at a time.

"Sometimes you go six or even eight months not seeing your family," Batres said. "It's hard not to see the family at all. I talk to my wife every day, and to the children. It's still hard."

But Batres said the money he earns at the carnival compared to what he would make in Mexico leaves him little choice.

"It is much better," he said. "That is why we come into work here. It's hard work. But sometimes we take a rest for two, three days when we are going to the next place."

The pay is why Juan Jose Fernandez, a father of two, has worked at the carnival since 2003. He supervises and maintains the Kiddieland rides. He also runs safety checks in addition to the daily inspections by independent inspectors hired by the fair, and by the state Department of Labor.

The work is "very hard," Fernandez said, but he said it's worth it because of the amount of money he can send home. 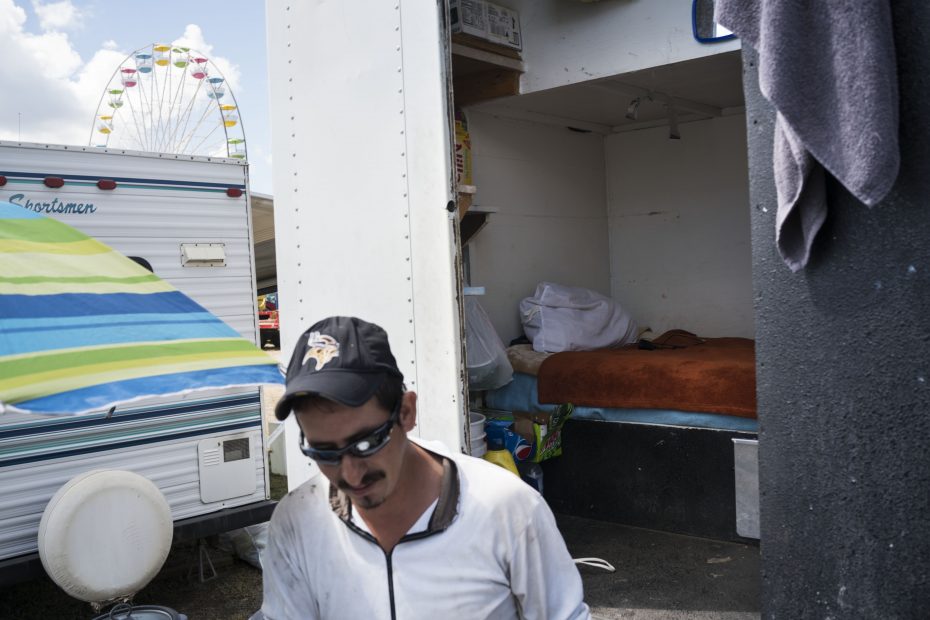 Jose Melendez, 33, of Durango, Mexico stops by his room in one of the portable bunkhouses where Strates Shows workers stay at the Erie County Fair. (Derek Gee/Buffalo News)

Melendez, 33, began working for Strates Shows when he was 18.

"I have 150 tracks, and every track is so heavy," he said of the roller coaster. "I have six guys and we work together. When I work with all Mexicans, we all pick up the track together, and it is more easier for us."

The absence from his wife and children is the hardest part, he said. But Melendez said the company is understanding if a family issue requires a worker to return to Mexico.

"When I have problems back home, the boss tries to help," he said. "That's why I come every year. They are good people."

Melendez and the other carnival workers sleep in mobile bunkhouses they don't have to pay rent for. They pool money together to buy groceries and cook meals outside the bunkhouses.

"When we had a train coach, I would literally not be able to walk from one end of the coach to the other without my eyes watering," Weston said. "The food smelled fabulous." 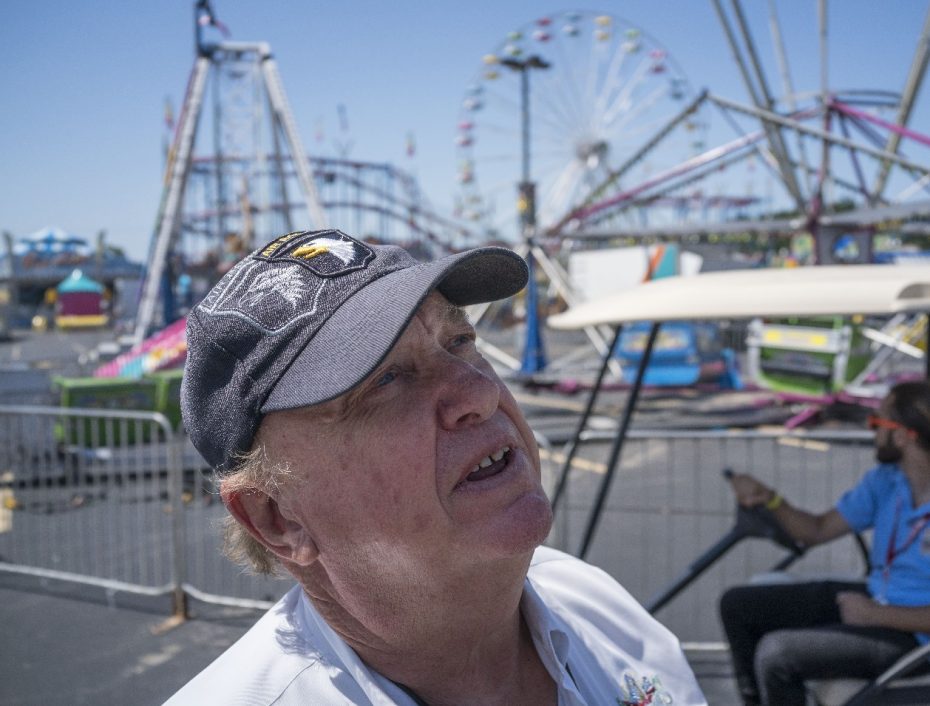 Weston said the Mexicans who work at the carnival are family oriented and have caused few problems for the company.

They make up an important source of labor for the carnival, but not the only one. The others are people who grew up in the carnival life and military veterans, Strates said.

Steve Ianni was born into what he called "the family business." At age 30, carnival work is the only work he's known.

One of his jobs is "train master," in which he oversees the loading and unloading of the train that transports rides, concessions and other equipment.

Weston himself took up carnival life several years after he returned from Vietnam, where he served with the 101st Airborne and took part in the Tet Offensive. He was later diagnosed with post-traumatic stress disorder.

"Coming to Strates Shows probably saved this guy's life," Weston said of himself.

He likens his job to being the general manager of a construction company, in which a small community is put up and taken down every couple of weeks.

"I'm asked what keeps your interest in it, and I say it's the sheer magic of it all," Weston said. "When you can come into a paved area and in a matter of a few days erect a midway that consists of rides, landscaping, side shows and cotton candy, there's nothing like it."

The problem of politics

The political climate's current anti-illegal immigrant tenor is a concern to the carnival industry. A March 2017 Gallup Poll found 59 percent of Americans were worried "a great deal" or "fair amount" about illegal immigration. The industry would suffer greatly if foreign workers -- 7,000 of whom legally worked in the outdoor amusement business in 2016 -- were denied admission.

Strates shows was fortunate this year to get its paperwork processed in one day, Jimmy Strates said. But not everyone in the business was so lucky.

"We did not experience a problem, but a lot of the industry did," Strates said.

Congress made it harder to get H-2B visas this year, and the amusement industry is hoping that isn't repeated in 2018.

When lawmakers allowed more foreign workers in May, President Trump's Mar-a-Lago resort and Trump National Golf Club in Florida applied for 76 of the slots, Vox reported.

"Trump brings in workers also from all over the world for his hotels," Weston said. "Not everyone wants to do those jobs, and they still have to be done."

Strates said carnivals will continue to need foreign workers regardless of how the political winds are blowing.

"The fact is we have a need for the work to be done, and these people have a need to go to work," Strates said. "We either have to get the American worker doing these jobs, or have the jobs performed by someone else."