"Eat a Peach," the famous Allman Brothers album, burst on the scene in 1972. Not long afterwards, Gregg Allman came to stay for a while in Western New York.

Coincidence? I think not.

What is it about the place that so favors the fuzzy fruit? I put the question to Bob Tower, of Tower Orchards in Youngstown, whom I knew from the Clinton Bailey Market. The Tower clan -- there's a bunch of cousins, including Dan Tower, Tom Tower, and Dave Tower -- has been growing peaches in Niagara County since ...

"Since right after the war," Bob Tower said. 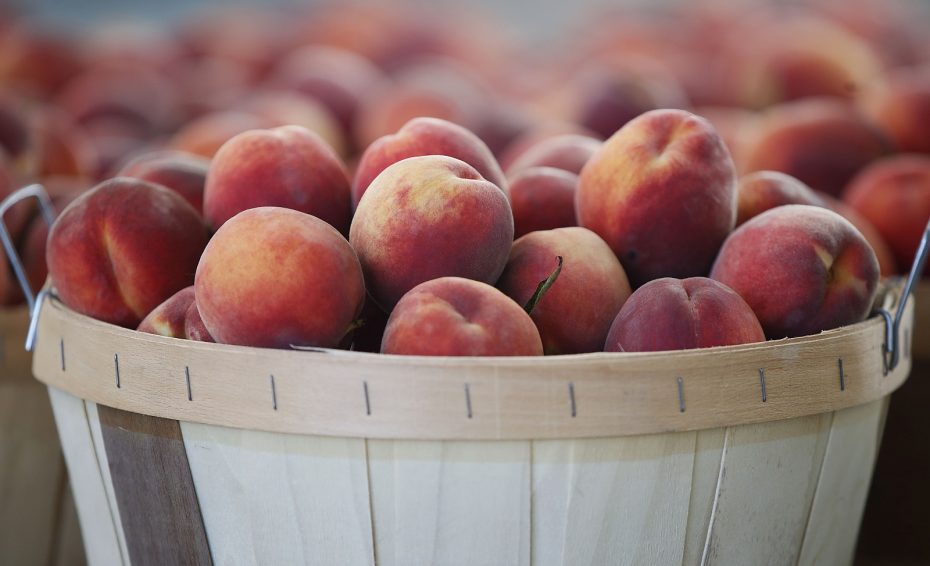 Tower mused that Niagara County's magic might have to do with the lake, the soil, and the sun.

"The lake produces a moderating climate because doesn't freeze," he said. "It's too deep, too big, too something."

On a bright day in high summer, those winters seemed worlds away. Bob Tower's farm baked in the sun. 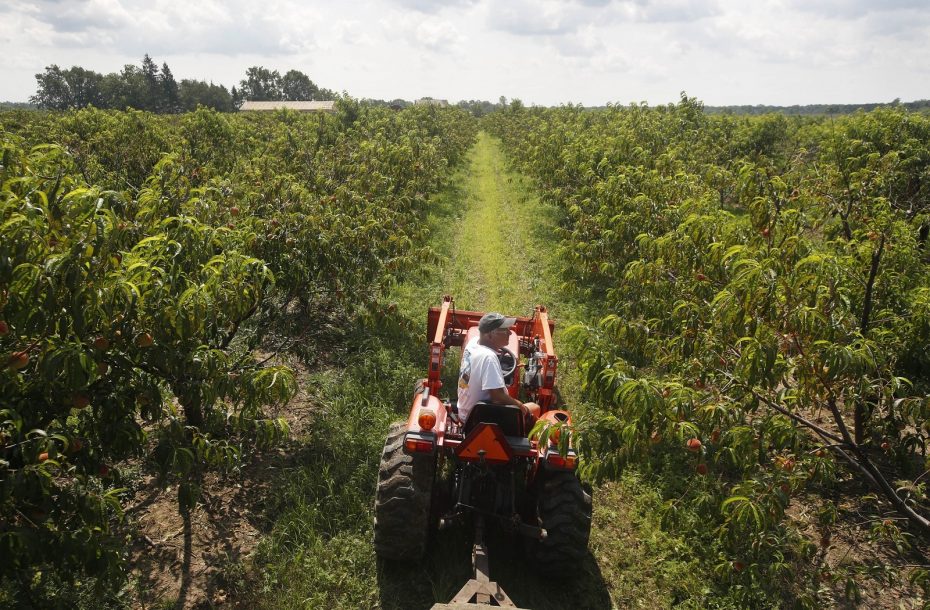 Owner Bob Tower grew up on the farm and has been working there full time since 1970 and took over from his father in 1990. Farming has been in his family for generations. His ancestors began farming on this property in 1815. (Sharon Cantillon/Buffalo News)

It was funny to see the farmer in his natural habitat, in sharp contrast with the urban grittiness of the Clinton Bailey Market. Birds sang. Flowers bloomed. The family's black Lab puppy, Porter, barked and frolicked. Porter's predecessor was Foster. Tower and his wife, Jackie, like to name dogs after beers.

Tower, on a tractor, was preparing to pull us through the orchards on a flat hay wagon. Joining us were his daughter, JoAnna Fildes, and her husband, Kevin. Both are teachers at Amherst Middle School and work on the farm when time allows. It's in their blood, apparently. JoAnna told us happily that Brian, her brother, had left his banking job out of state and is heading home to join the family business.

Tower revved the tractor and, with a jolt, we were off.

"It's a lot of fun when he starts up and doesn't wait to see if you're ready," Kevin Fildes laughed. 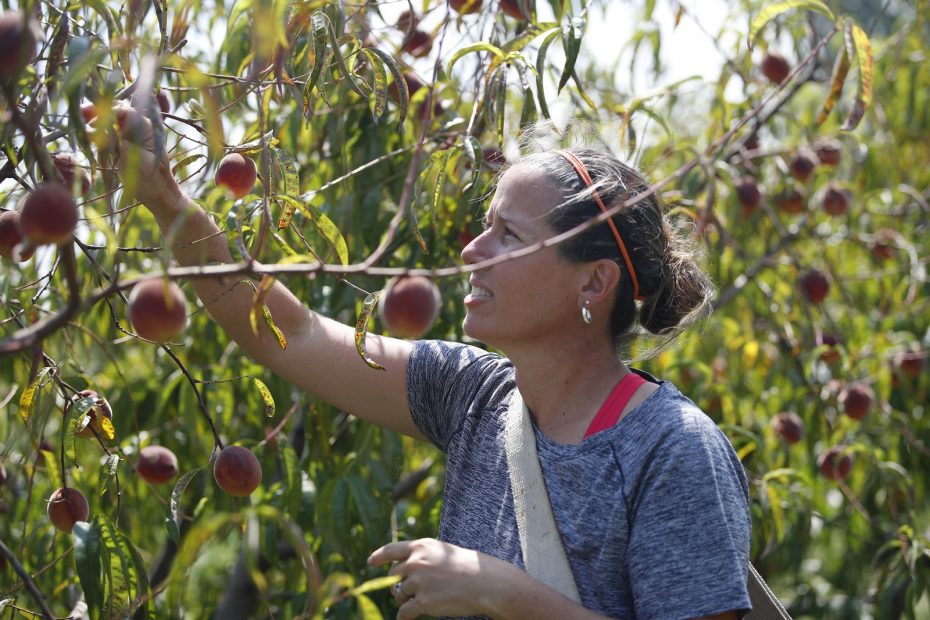 JoAnna Fildes, the daughter of owner Bob Tower, picks peaches. Because she's a teacher, she can help her father full time in the summer and on weekends in the fall. (Sharon Cantillon/Buffalo News)

Calm descended as we jounced along. A turkey vulture soared overhead. Monarch butterflies danced over the trees, which were covered with peaches. Bees buzzed. The scent of mint filled the air. We had trundled over some mint plants. It was like the Garden of Eden, only with no forbidden fruit.

We passed trees bearing the sugary donut peaches, a new breed that's flat and sweet like a friedcake. Then we feasted our eyes on their round counterparts, tinted orange, gold and, well, peach.

Many of the farm's peaches are Flamin' Fury, a variety that comes from Michigan and is trademarked. They were almost ripe, but not quite. Peaches ripen off the tree, but you don't want to pick them too early.

"The longer they wait, the bigger they get," Tower explained.

At the same time, you can't wait too long.

Tower said, "You can't handle them soft, or they get bruised." 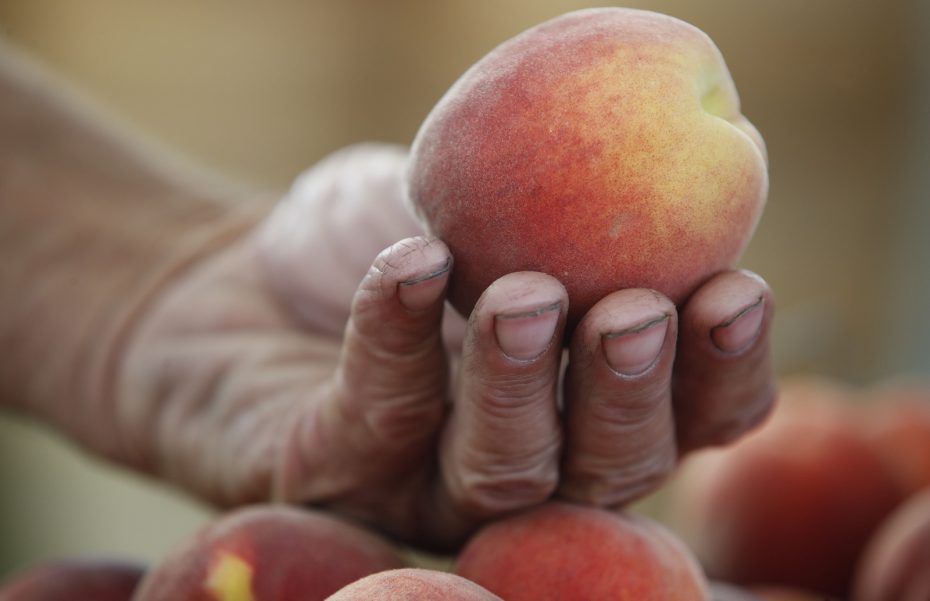 A close look at a peach from Tower Orchards. (Sharon Cantillon/Buffalo News)

Peach trees grow swiftly, Tower told us.  Plant a peach tree, and it will be full grown in three or four years. On the other hand, the trees' lifespan is short. Twenty years is a ripe old age.

Growing peaches, we learned, is not as easy as pie. The trees need lots of sunshine. "Sunshine makes the sugar," Tower said. They also need heat -- but not too early in the season. A tough winter can hurt things. So can bugs and viruses.

Nights that are too cool can slow the peaches down. Tower said another grower, facing that situation, quotes a Jamaican expression. "She says, 'The peaches are sleeping.'"

When the fruit is going great guns, another expression applies: "The peaches are having babies."

What would it take for things to be that peachy? From where we sat, in the back of the hay wagon, it sounded as if peach growing came down to a lot of dumb luck.

"That was my father's favorite expression, dumb luck," he said. "Whenever anything went right it was because of that."

The risks involved make the peaches all the sweeter. Every September, Lewiston's Niagara County Peach Festival celebrates the miracle that is the peach crop with peach contests and a Peach Queen. Meanwhile, we would do well to take the Allman Brothers' advice.

Out on the farm, we just had to. The time was ripe, even if many of the peaches weren't quite. Tower selected a few that were on the edge. He tasted one, critical. Last year was a banner year. Would this year's peaches measure up?

For heaven's sake, just bite in. Savor that peachy sweetness. Slurp up the juice.

From Artpark to the Peach Festival: A guide to Lewiston