It was supposed to be a program for 45 local middle and high school students to learn a little math, engineering and biology over the summer by making customized prosthetic hands using a 3-D printer.

But for the students — and three young kids — the experience turned out to be much more.

The Hand in Hand project concluded Tuesday on the campus of Roswell Park Cancer Institute where the students delivered the prosthetics to the three recipients, each born missing a hand: Katelyn McCarthy, 9; Liam Hilliker, 5; and Caedan Muldoon, 4.

The wonderment and excitement on their faces told the whole story.

Liam was a little shy, so he clung to his mother, Kelly, as they made their way to the front of the room filled with people to receive his new, free fabricated hand.

Once he tried it on, Liam — a kindergartner at Silver Creek — quickly figured out that flexing his left elbow pulled strings that control fingers on the hand, allowing him to grip. He practiced with his mom — holding a toy, holding a cellphone.

"He never had one before, so the occupational therapist will show him how to use it," his mother said.

"But he seems to be getting the hang of it," she said. "He knows up is closed and down is open. I can't wait for him to get on his bike and see how that goes."

While their fit and functionality don't measure up to the professional-grade prosthetics made by trained experts, 3-D printed hands have come onto the scene in the last five years as a less expensive alternative with a promising future. 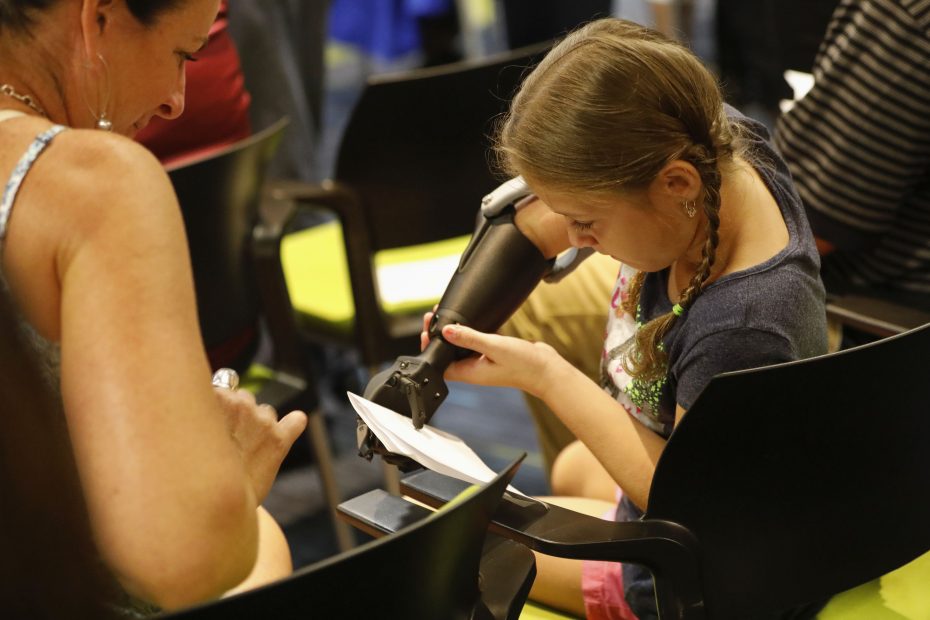 The students in the summer program created the hands using designs made available by e-Nable, an online community that uses 3-D printers to create free fabricated hands and arms for people all over the world. Their prototypes were turned over to A.W. Miller company, which returned a durable, lightweight finished product made from plastic and carbon fiber.

"The nice thing about these is they're very repairable," said Ed Hawkins, a technology teacher at Sweet Home High School and one of the instructors."If a finger breaks, it's not a big deal to print a new one."

Katelyn broke into a wide grin when asked what she plans to do with her new prosthetic hand, which will fit on her right arm just below her elbow.

"I can really get better at things," said Katelyn, a fourth-grader at Southtowns Catholic School in Lake View, "like tying my shoes, riding my bike, writing with this hand."

"She's good at throwing," said her father, Sean McCarthy, "but this will help with the catching."

Watching in the audience were many of the students from the Hand in Hand program. After the presentations, they snapped photos with Katelyn, Liam and Caedan.

The summer program taught Danya Flood a lot about technology — but the three kids taught her something, too.

"I also learned from the recipients that you shouldn't give up on things because it's a little bit hard," said Danya, 15, a sophomore at Research Lab Program for Bioinformatics & Life Sciences, one of Buffalo's new high school programs.

Meeting the kids and their parents helped Felice Masumbuko understand the impact of science and technology on lives.

"I know I was doing something good when I see them smiling," said Felice, 15, a junior at Lackawanna High School. "It felt good." 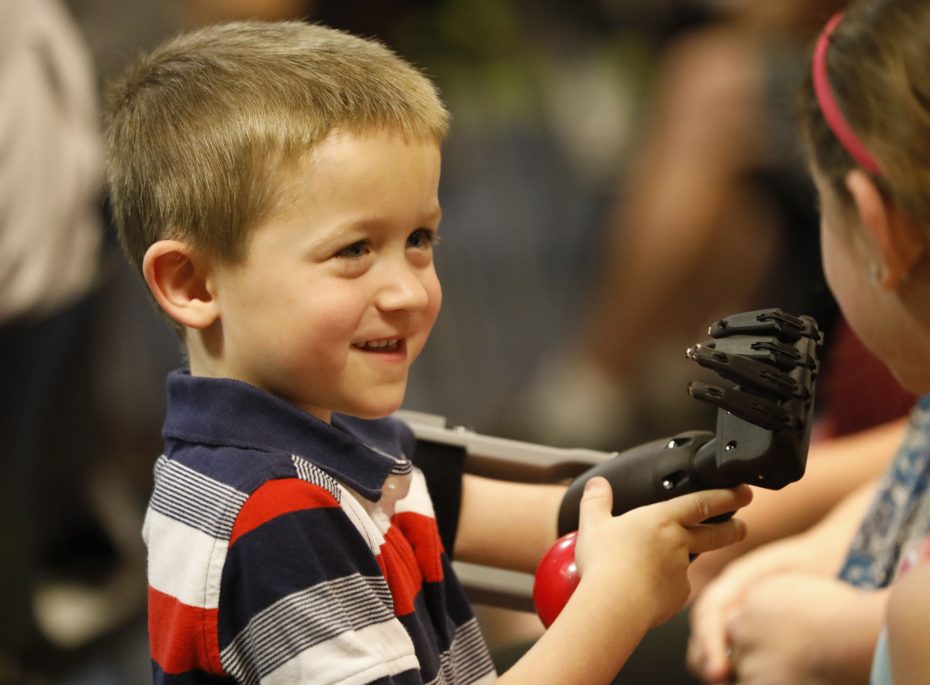 Caedan tried his prosthetic hand on his left arm.

Then, with a mischievous smile, he turned to his sister, Teagan, and poked her with it.

"Typical little brother," said his father, Sean Muldoon, shaking his head. "He wants to wrestle his sister all the time."

The hand will need some adjusting, probably some more padding, as well.

The project was funded by AT&T in partnership with WNY STEM Hub, a nonprofit designed to expose students to the fields of science, technology, engineering and mathematics. It wasn't perfect, Hawkins acknowledged.

And, in the end, it was more than just about the prosthetic hand for Caedan.

It was an opportunity for the Lackawanna boy to meet two kids his age also missing a hand.

"He never met anyone like him before," his father said, "and that was pretty cool."