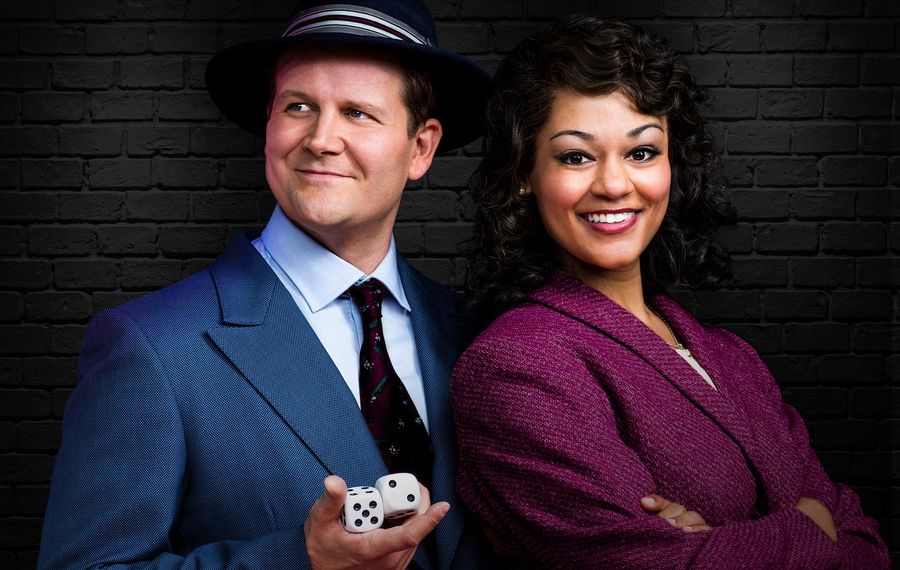 STRATFORD, Ont. - The 64th season of this western Ontario theater arts outpost is well underway, nine plays already open, five either in or about to begin preview performances.

Artistic director Antoni Cimolino has assembled a season with the theme, “exploring identity,” plays about knowing thyself, self-deception, deceit, identities that “unite or divide,” personal searches that lead to individual understanding or the greater good.

Here are capsule looks at five of the festival’s current offerings: 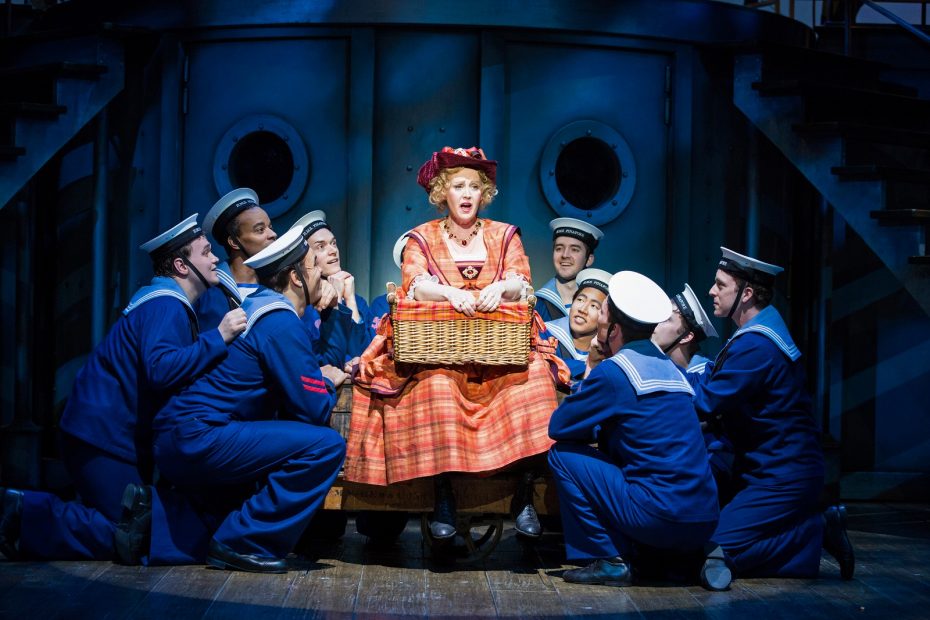 Lisa Horner as Little Buttercup with members of the company, in "HMS Pinafore" at Stratford. (Photography by Cylla von Tiedemann.)

Back in the day, Stratford produced a series of Gilbert & Sullivan operettas that were smash hits, sell-outs, box-office beauties. Happily, one of those shows, 1878’s “H.M.S. Pinafore,” has returned, delightfully silly once more, again skewering Victorian morals, mores and the absurdities of the British ruling class at the time. Librettist Gilbert and composer Sullivan, quintessential Victorians, found the right formula for their patter-filled revues: stock characters galore - a hero, his love-interest, an uptight father, a villain - a mix of lucidity and lunacy and an outrageous story told and sung with a straight face.

On the high seas, the Pinafore’s captain and crew, plus, incongruously, a vendor of necessities, Little Buttercup, await a visit from the First Lord of the Admiralty, Sir Joseph Porter, who sings upon arrival, “Stick to your desk and never go to sea and you will be the Captain of the King’s Navy.” Porter has eyes for Josephine, the daughter of the ship’s captain. But she loves a common sailor, Ralph Rackstraw. Little Buttercup, who has a secret, aids in the sorting out of class differences. “Oh Joy, Oh Rapture….” sums it up.

There is much exaggerated stumbling about, non-stop acrobatics - amazing, but endless - and lame physical gags. Director Lezlie allows it all. Distracting but harmless. 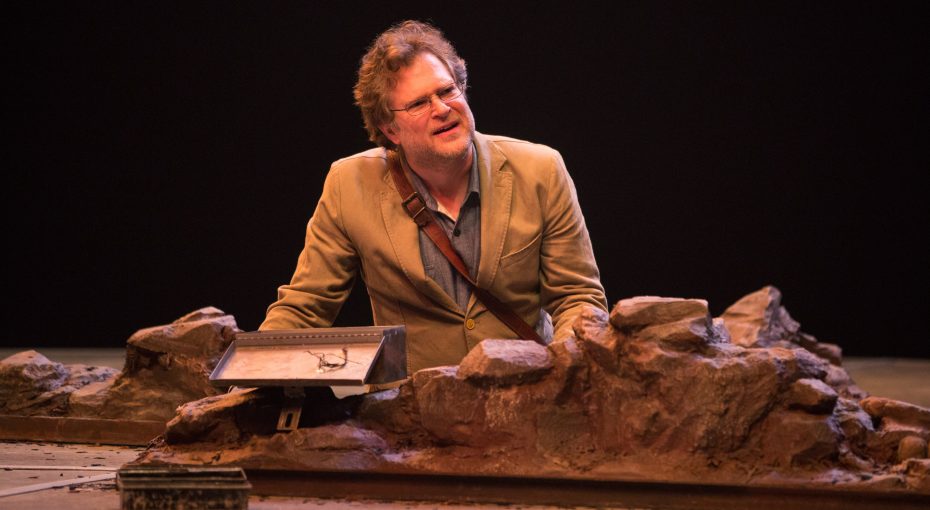 Ben Carlson as Apemantus in "Timon of Athens" at Stratford. (Photography by Cylla von Tiedemann.)

“Timon of Athens,” by William Shakespeare. To Sept. 22 in the Tom Patterson Theatre.

“Money doesn’t matter. Until it does.”

So goes the hype for “Timon of Athens,” a late play (1607) by William Shakespeare, one thought by many theater historians to be a work of collaboration with the Jacobean playwright, Thomas Middleton. The play, often dismissed as one of Shakespeare’s lesser efforts - uneven, incomplete, the title character alone fully realized - is now on stage at the Tom Patterson Theater, a riverside venue scheduled for complete renovation after the season. Joseph Ziegler, a superb, nuanced actor nearing patriarch status in his 10th Stratford season, stars as Timon, benefactor turned misanthrope, a man betrayed.

Timon loves to bestow money, gifts and lavish feasts on his sycophantic “friends,” succumbing to their flattery, falling for their phony fealty. Timon has given so much of his money away that Flavius (Michael Spencer-Davis), his loyal, honest steward, warns his master that the coffers are nearly empty. Finally grasping his plight - “’Tis deepest winter in my purse,” he says - Timon sends a call out for donations. Few respond. Timon is broke, ruined, mocked.

He moves to the wilderness, hating mankind, vowing revenge. While searching for edible roots, he finds gold, fueling more tirades and fits of rage against passers-by. Cursing increases, dementia ensues. He wishes disease and tragedy upon humanity. Tossing gold coins to the winds - and some to a military commander, Alcibiades (Tim Campbell) - he posthumously helps finance a coup against his former allies.

Stephen Ouimette directs, reprising his applauded “Timon of Athens” of some seasons back, again staging the story in modern dress, again a cautionary tale, a fable for our times, greed and extremes upfront. Ouimette does seem to make Timon’s one real friend, the cynical, churlish wanderer, Apemantus, more central. Alas, Shakespeare/Middleton tell us far too little about him. Ben Carlson is fine in the role.

Joseph Ziegler amazes. The play has its shortcomings. Ziegler does not.

“Guys and Dolls,” Broadway musical revival. Through Oct. 29 in the Festival Theatre.

That’s about all that needs to be said about this staggeringly good “Guys and Dolls,” oft-performed but never this well as this Donna Feore-directed and choreographed revival currently taking up every inch of the spacious Festival Theatre stage, one where Shakespearians usually roam. Touts, pimps and denizens of the night now call it home.

So. Vocally, superb; Dancing, nothing but verve and invention; Sets, neon-bright and   uncluttered. This is Donna Feore at her very best in this Frank Loesser testimonial. 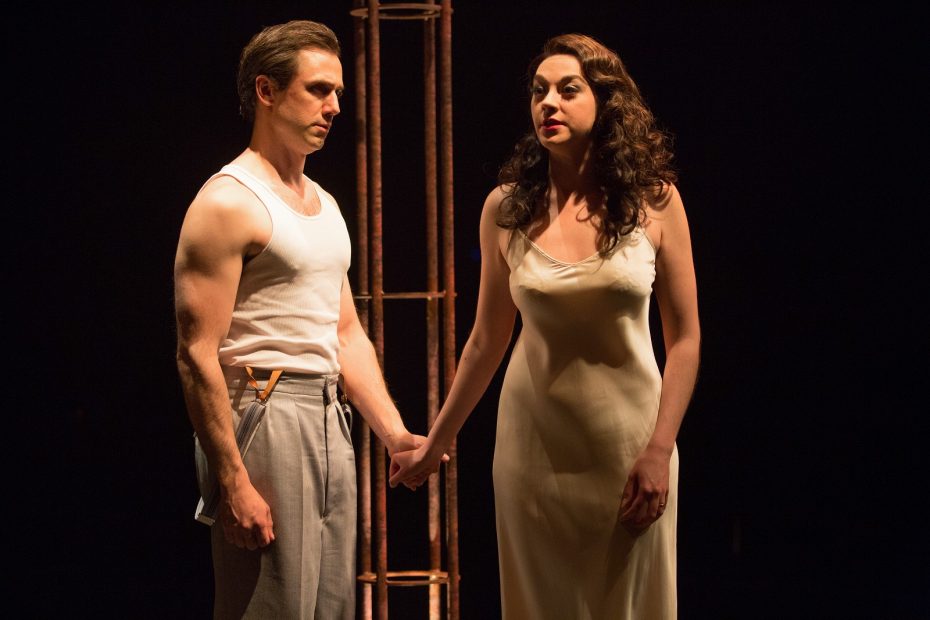 Cyrus Lane as Alsemero and Mikaela Davies as Beatrice-Joanna in "The Changeling" at Stratford. (Photography by Cylla von Tiedemann.)

“The Changeling,” drama by Thomas Middleton and William Rowley; to Sept. 23 in the Tom Patterson Theatre.

It’s advertised as “The perfect crime…until you get away with it.” “The Changeling,” dark, murky, sinister, lustful and odd, is challenging audiences these summer nights at Stratford, directed there by Jackie Maxwell, late of the Shaw Festival. Written in 1623 by Middleton - as mentioned earlier, a possible Shakespearian collaborator - and comedic playwright William Rowley - the play plods and wanders then races to a bloody finish, justice prevailing but not before some murderous moments.

Director Maxwell has set the tale in 1938, the Spanish Civil War exploding. The lovely Beatrice-Joanna wants out of an impending arranged marriage and enlists the creepy manservant, DeFlores - whom she despises - to dispatch her betrothed. (Film noir buffs will recognize the plot of “Double Indemnity.") The deed is done…but not over.

“The Changeling” may have been too intense for early 17th century watchers so, more than likely, Rowley was recruited to add lighter moments, a subplot involving a mental asylum filling in the spaces of the evil itinerary being devised by Beatrice-Joanna and her new ally, DeFlores. Menace and evil lurk, in fact, pervade. Guilt and anxiety arrive late. 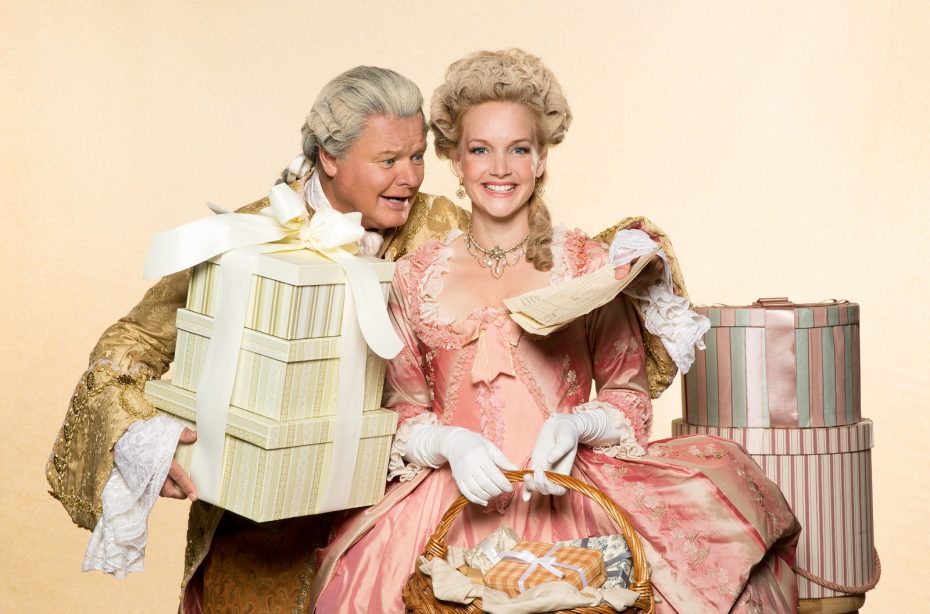 Geraint Wyn Davies and Shannon Taylor star in "The School for Scandal." (Photography by Lynda Churilla.)

Playwright Richard Brinsley Sheridan may have invented “fake news” and “alternative facts.” Both are central to his 1777 comedy, “The School for Scandal.”

This is a sprawling bit of  powdered and bewigged foolishness that The Stratford Festival does best. “Scandal,” always in performance somewhere in the world, has never looked better than this latest version, directed by Antoni Cimolino and featuring a host of Stratford favorites. It's a “deep cast,” as they say, one that boasts Tony Award-winner Brent Carver, as well as Geraint Wyn Davies, Tom Rooney, Shannon Taylor, Rod Beatty and again, Joseph Ziegler, in the delicious role of wise uncle, Sir Oliver Surface.

Sir Peter Teazle (the spendid Wyn Davies) has given up his long-time bachelor status and married a young lass from the country. Lady Teazle soon learns the ways of the Big City and Sir Peter is frazzled. “Well,” she says, “If you wanted authority over me, you should have adopted me, not married me.” Ouch. Sir Peter has his spies out for cuckoldry.

Meanwhile, such society luminaries as Lady Sneerwell, Mrs. Snake, Sir Benjamin Backbite, Mr. Crabtree and Mrs. Candour gossip without stop, inventing scenarios, embellishing the simplest or the most accidental of incidents…particularly anything involving the escapades of the Surface Brothers, Joseph and Charles.

It takes some minutes for “The School for Scandal” to set up. Then, funny business.