When Tim Haniszewski Jr. was growing up in Lancaster, he and his brother Tyler didn't worry about Little League baseball or Pop Warner football. Their passion was the demolition derby.

The boys used to set up a make-believe fairgrounds in the bedroom they shared. They'd smash Matchbox cars to smithereens, just like they watched their father do with real cars on weekend nights. They'd imagine the roaring fans, the crunching metal, the clouds of dust that mingled with the scent of rubber.

Already, they knew what would happen as they soon were old enough to drive. They'd join their dad and uncles on wandering excursions to buy junk cars, evening drives through neighborhoods in Niagara Falls to look for vehicles without license plates, rusting in driveways.

The holy grail was an abandoned Imperial, perfect for the demo. They'd tow away a car and get it into running shape, then take it to some local show or county fair – the Erie County Fair in Hamburg was always the home court – with a dream of qualifying for a marquee stop on the demolition circuit:

The state championships on a legendary dirt track, at the New York State Fair.

"Going to Syracuse," Ed Haniszewski Jr., their uncle, said in a wistful voice. "That was always the big one."

This year, for the first time in decades, the state championships are no more. 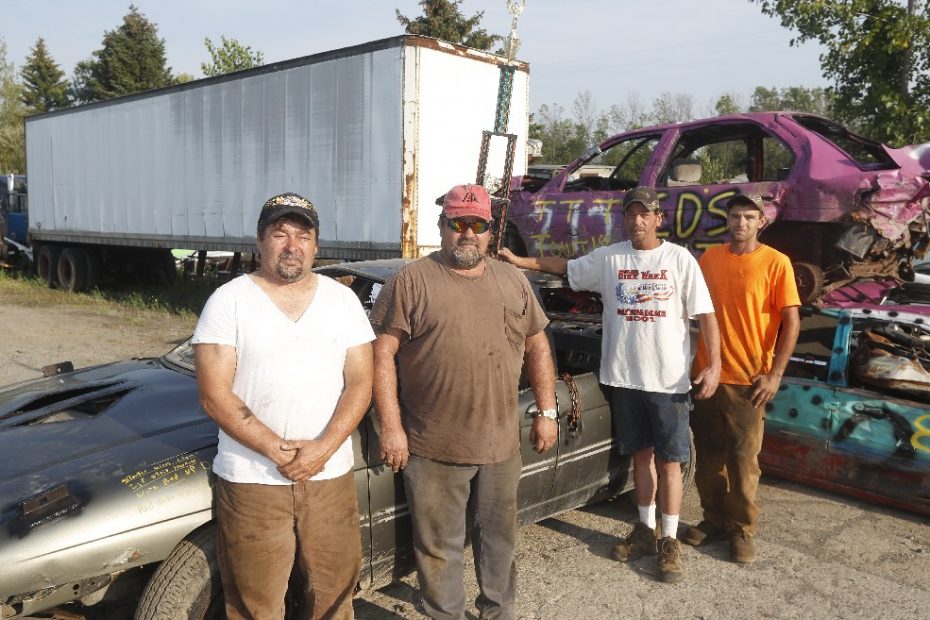 To the Haniszewskis and roughly 120 other drivers in Western New York, next Sunday's events in Hamburg – billed as "the world's largest demolition derby" – are about as good as it gets, unless you go out of state.

For as long as they remember, the state championships were held in September near Syracuse, on one of the oldest dirt tracks in the nation. Tim Haniszewski Jr. was a dramatic winner at the final event there two years ago, rallying to stand atop his smoldering Camry, fists clenched, as a new state champion.

That ended a few months later, when Gov. Andrew Cuomo and other officials pressed a ceremonial button that blew up the state fair grandstand behind a plan for digging up the track, vastly changing the midway and adding such buildings as an equestrian center.

The process happened fast: Many drivers joined Jay Milligan, the Lake View promoter who runs the Erie County derby and other events around New York, in saying they received little warning. Some describe it as a strange and abrupt rejection from Albany of a working-class tradition close to the spirit of the state fair.

Milligan scrambled to run a new state championship a year ago at the Erie County Fair. Tyler Haniszewski was a winner in 6-cylinder cars. As for his older brother, Tim Jr., he came within seconds of defending his state title. He was one of the last survivors in the 4-cylinder finals when his vehicle took a hit. Tim Jr. was wearing a helmet, but he smacked his head so hard that he blacked out.

When he woke up, maybe 20 seconds later, he had lost. 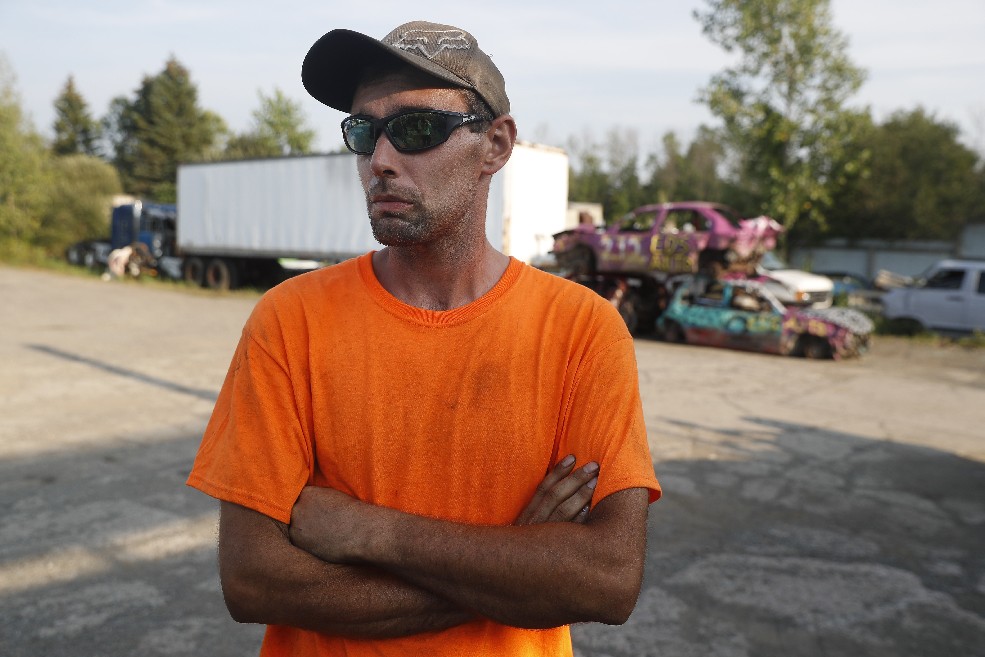 He'd just as soon that isn't his last memory of a state championship, but it might turn out that way. Drivers from distant parts of New York were reluctant to make the long trip to Hamburg when Milligan tried to hold the state title here. The turnout dropped by more than half from 140 entries in Syracuse, Milligan said, and it didn't justify staging a statewide event this year.

"God, I wish we could go back to Syracuse," Milligan said. "That's where the state championship ought to be."

But there are no plans to revive the event, said Dave Bullard, a state fair spokesman.

In Hamburg, next Sunday's championships will be for traditional supremacy at the Erie County Fair – where Jay Milligan's father, "Jay" Walter Milligan Jr., who died in March, started a derby in 1963.

The competition this year may be especially intense, since the late summer event will be as good as it gets at this end of the state.

Still, there's a sense of wistfulness that no statewide showdown will follow.

"Syracuse was known for being the place of champions,  where the best of the best would go to compete against the best of the best and you had a chance to win it all," said Eric Stowell, a state corrections officer who won his first-ever Franklin County Fair derby title this summer.

It was an emotional victory. It came down to Stowell battling against his soon-to-be brother-in-law and close friend, Kenny Rousell. Their cars were the last two running. They gave no quarter.

"When everybody else is out," Stowell said, "it's time to derby your buddy."

Rousell got pinned in by a wall. Stowell won. Not long ago, that would have punched his ticket to Syracuse.

Not anymore. Even if the state championships were held again in Hamburg, Stowell said, the 300-mile and more drive from his home in Franklin County, with a car in tow, would be too much.

Bob Head, a demolition derby promoter at the Chautauqua County Fair, described the loss of the state event as heartbreaking.

"I think if you got all the drivers together," Head said, "they'd want a state championship."

He suggests creating a rotating state title at different county fairgrounds around New York, which would help local economies and sustain the tradition. As a first step, he's thinking about what he'd call a Western New York championship in Dunkirk, a year from now.

Milligan said he also is looking at sites closer to the middle of the state, such as Ontario County, for potentially reviving the state title next year.

As for Tim and Tyler Haniszewski, they are third-generation members of one of the great derby families in the region. Their late grandfather, Ed Haniszewski Sr., was the winner of the first-ever Hamburg derby more than 50 years ago. He and his wife, Alfreda, raised eight children with the demolition derby in their blood, a passion that's now at work in their grandchildren.

The family scrapyard in Lancaster is often known as Henning's. Alfreda explained how the name was an alias used as a teenager by Ed Sr., so he could go racing without his mother's permission. He was sentimental about it. He kept the name for his business.

There are many state demo championships in the family: Tim and Tyler have won state titles, as did their uncles Paul and Kevin. And in 1981, Tim Sr. had a season that remains a matter of family lore, with clippings and photographs stored carefully in a sealed plastic bag.

Tim Sr. not only won in Syracuse, but went on to win what was known as the world championship in Islip. 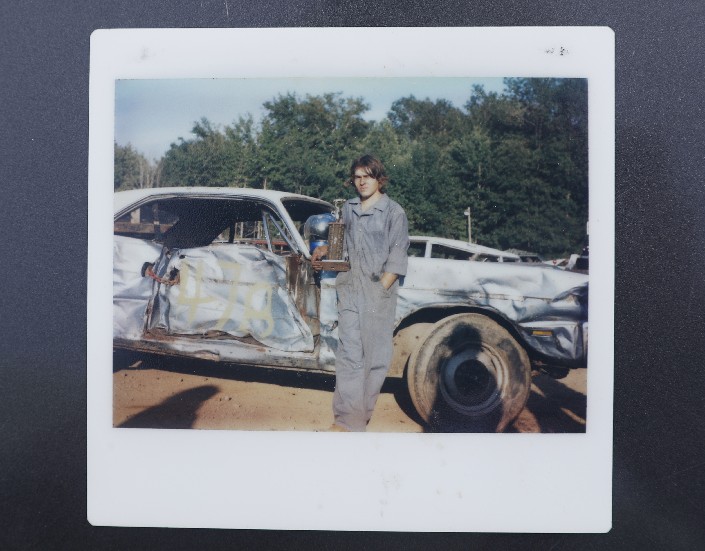 Tim Haniszewski Sr. as a teenager, not long before his run to a state and world championship in the demolition derby. (Family photo)

His body is sore now, from decades of driving a wrecker in all seasons and from the pounding of the demo. His knees,  shoulders and arms remind him of every hit, of every jolt. Still, he'll be among many Haniszewskis competing next Sunday at Hamburg.

Right now, Tim Sr. and Tim Jr. are scheduled to go head-to-head in a heat. Family members anticipate that generational collision between crafty drivers with such joy that they've already bought 34 grandstand seats.

Tim Sr. speaks with affection of the larger community around the derby. He thinks of the drivers, the families who bend their schedules to show support, the men and women who spend countless evenings in the garage, painting family names on their cars in white block letters.

As far as Tim Sr. is concerned, they all deserve the chance to compete for a state championship.

He is talking about an informal tour of racetracks and fairgrounds in the middle of the state, trying to see if there is any interest. If Tim Sr. could pull it off, if he found the right allies to help with insurance and planning, he would seriously consider trying to organize a derby to decide the state title.

This much is guaranteed: His family would be there.

"No matter what," said his daughter Sara, "these guys put on a great show."

Sean Kirst is a columnist with The Buffalo News. If you have great demolition derby stories from Western New York, send them to Kirst by emailing him at skirst@buffnews.com or writing to him in care of The Buffalo News, One News Plaza, Buffalo 14240.