It's "Jurassic Park." It's "Into the Woods." It's something you won't find anywhere else, that's for sure.

The Griffis Sculpture Park, sprawled over about 400 acres between Ashford Hollow and East Otto, radiates weird dreaminess. Birds -- you think they're birds, anyway -- are ingeniously poised atop high sticks. You can see them from the road. You can also see a crowd of oversized women, wrought from metal. They have small heads, long necks and a wide variety of figures, all arresting, some disturbing.

Enter the park, walk to the woods, and a life-sized giraffe points your way to the trail.

Follow that trail a few feet, and you find yourself face-to-face with a gleaming, giant crab. A little further, there's a prehistoric turtle. And a triceratops. They wait in the woods, some half hidden in the greenery. They look as if they are waiting for something.

They are waiting for you.

Such is the grotesque magic of this place, founded in 1966 by the late sculptor Larry Griffis. Nothing about it is normal. The $5 admission is voluntary. No one checks to see if you pay. The park is in two parts, and few signs direct you from one to the other. The sculptures -- women and animals, mostly -- come with no explanation. You have to stumble upon them and make of them what you will.

Griffis intended the park as a place where you could, literally, lose yourself.

His son Simon has told the story of how his father came up with the idea. The family was in Italy, and the children were playing on the ruins of Emperor Hadrian's villa.

"Look at my kids," the sculptor said. "I've taken them to the finest museums and galleries but they've come alive in this environment where they can interact and they can smell the flowers and they can touch things."

His dream was born. Returning to Western New York, he scouted several locations before finding just the right spot in rural Cattaraugus County. He bought 100 acres. That's right, as in the Hundred-Acre Wood. 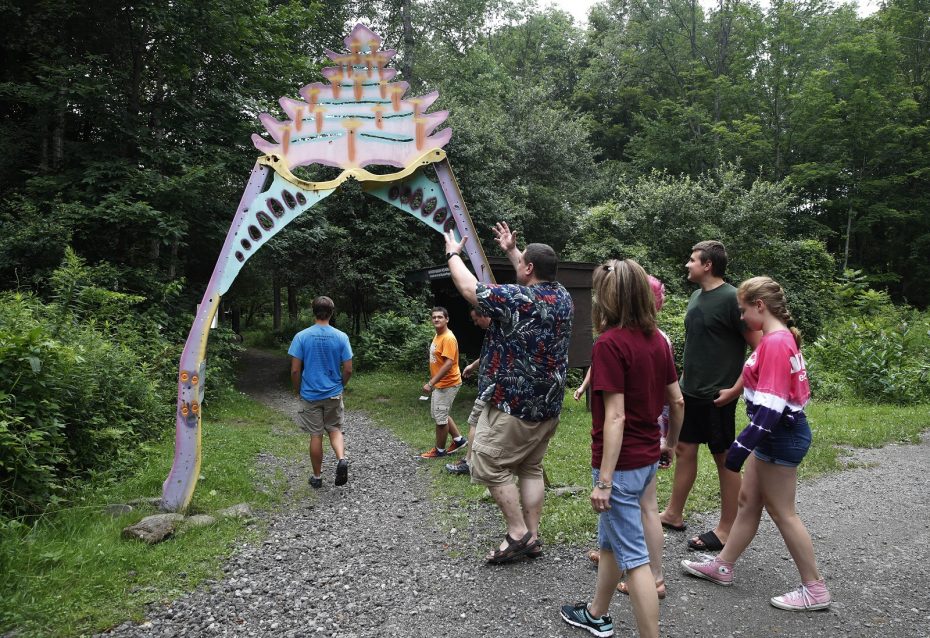 Griffis Sculpture Park in Cattaraugus County is one of the most unique destinations in Western New York. (Sharon Cantillon/Buffalo News)

The park has grown over the years, but still keeps a fancifully low profile. Two of us from The News, visiting on a warm, cloudy weekday, found few other people. We didn't mind. Silence goes with this place. It's best to hear nothing but the whisper of the wind, to imagine yourself in an era when the creatures you encounter might have made sense.

Victoria Gullo, 19, a Canisius College student majoring in international relations, came to the park on a whim.

"I've never been here before," said Gullo, of West Seneca. "None of my friends likes this kind of stuff."

She was here on her own, and so her thoughts ran free. Looking at the creatures we thought were birds, she saw sting-rays. We compared our visions for a few minutes, wondering who was right. It didn't matter. There was no mistaking their ingenuity.

"If you get up close and look straight up, they look like they're flying. Or swimming," Gullo observed.

The park's other half, which we did not find without a struggle, was just as engrossing.

A pond was surrounded by giant female nudes. Several were also cavorting, awkwardly it seemed, in a nearby meadow. Had they been moved? Something didn't seem quite right. Of course, in this park, what does? 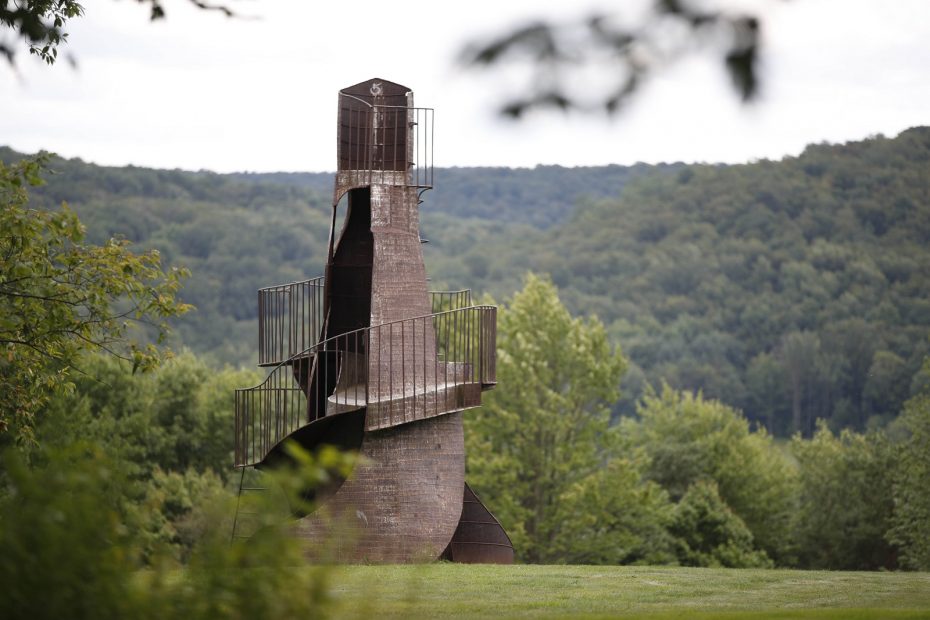 You can climb the Castle Tower at the top of the hill on the Mill Valley Road site of Griffis Sculpture Park. (Sharon Cantillon/Buffalo News)

More riddles appeared. There was a castle you could climb, and we did. Psychologists cite a classic dream that centers on a tower in the middle of nowhere. Crawling in and out of this structure's small crevasses, pulling yourself up the narrow ladder steps, you could find yourself thinking of that.

However long you linger at the park, you always wonder if you missed something.

We almost did. Hiking down a path in the deep woods, we saw, straight ahead of us, a bright red metal sculpture. Not by Griffis, we should point out. Works by other artists have also found their way into the park. 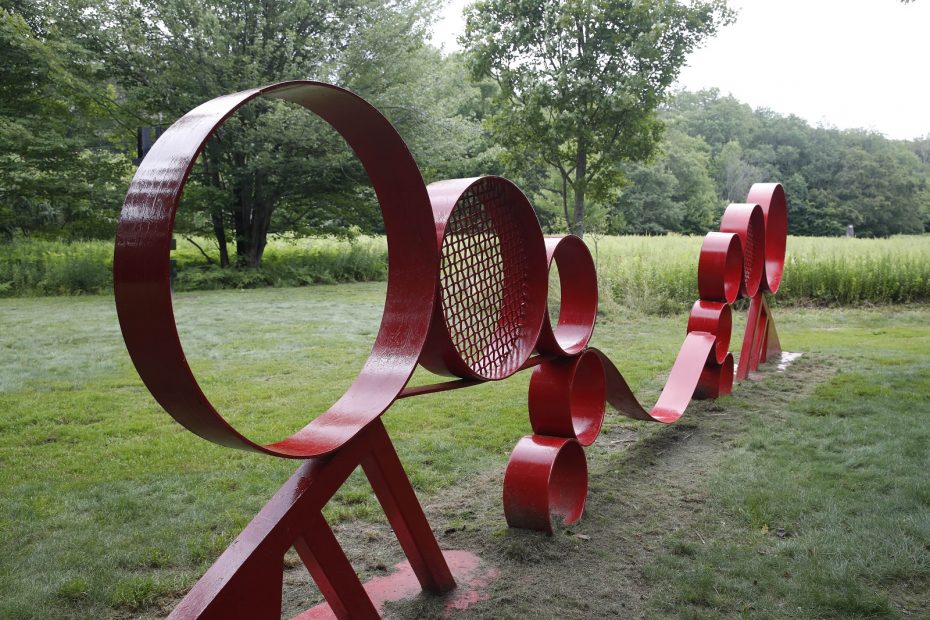 This bright red metal sculpture is one of the many to be seen at Griffis Sculpture Park. (Sharon Cantillon/Buffalo News)

Whatever the red abstract was, or was supposed to be, doesn't matter. The point is, walking toward it, we didn't notice the trail had forked. Had we gone in the other direction, we would have beheld Griffis' "Amazons" -- mind-bending statues of huge, brooding females. Luckily, we met them on our way back. Meanwhile, we had learned a lesson. Drawn to the gaudy trinket, we had almost missed the masterpieces.

You emerge from the park a little wiser than when you came in. Griffis had a way of tapping into your subconscious.

Brad Stagelfeldt, a Syracuse artist who works with metal sculpture, suggested that. He was visiting with his friend Michelle Ryan, of Cheektowaga, both for the first time.

He could relate. The day before, he laughed, he had been drawing little monsters for Ryan's amusement. "I kept asking her, 'Have you seen this fellow? How about this one?' "

That's just the kind of game that Griffis plays with all of us.

"You've got alien worlds in the back of your head, and you're trying to make sense out of them," Stagelfeldt said.

"This is how they manifest themselves."