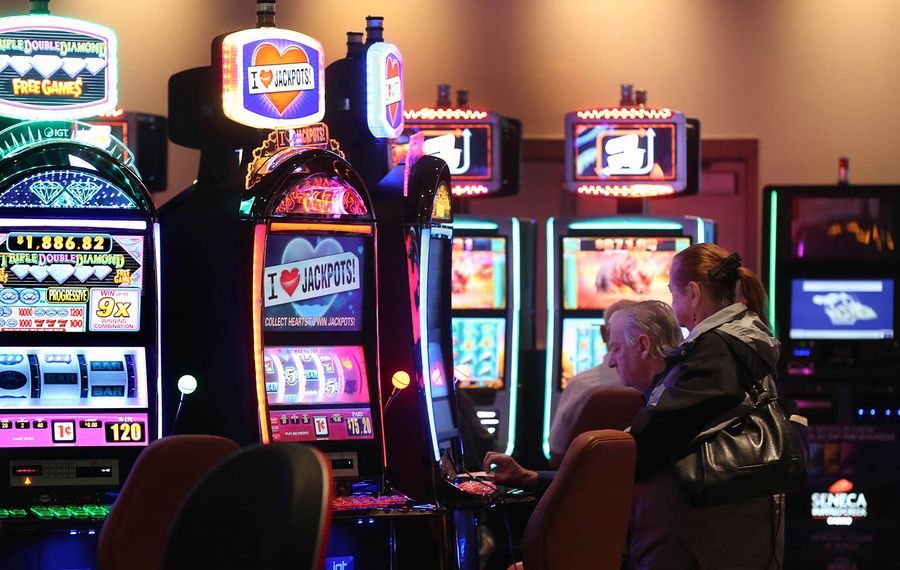 ALBANY – Counties across nearly one-third of upstate as well as cities and school districts from Niagara Falls to Salamanca are financial losers in the battle between New York State and the Seneca Nation of Indians.

At issue: revenue-sharing payments from the tribe’s three casinos.

Four months after the Senecas announced they were stopping payments of slot machine revenues to localities, those communities are scrambling. In some cases, they have relied on that flow of money for 14 years.

“We do see a strong sense of urgency and we have encouraged the state to engage…The governor needs to figure this out. There’s too much at stake,’’ said Stephen Acquario, executive director of the New York State Association of Counties.

Quarterly payments that typically arrive in July did not come through for 16 counties this year.

“It behooves everyone to work together to make a solution here. Everyone is sharing in the pain,’’ said Robert Keating, the Erie County budget director.

The county’s current budget counts on another $3.5 million coming from the Senecas this year.

The problem is acute in Niagara County, especially the city of Niagara Falls. That city’s credit rating was downgraded Tuesday by Standard & Poor’s, which cited the stoppage of the tribe’s payments. The city relies on the casino payments for 15 percent of its operating revenues, leading the Wall Street credit rating agency to note it has become too reliant on the Seneca money to balance its books. As a result, future borrowing costs are likely to rise when the city sells bonds to finance various projects.

“The city is one of the most economically depressed cities in the state, maybe the country,’’ said Joseph Ruffolo, president and chief executive officer of Niagara Falls Memorial Medical Center, which also receives casino revenue sharing money.

The fiscal pain is spread out in Niagara. While the city keeps most of the $16.8 million it receives annually from the casino located downtown, it shares money with the city schools, the Niagara Falls Memorial Medical Center, Destination Niagara USA, Niagara Frontier Transportation Authority and the state’s Niagara USA Development Corp., according to Meg Rossmann, a spokesman for Mayor Paul Dyster.

If the casino revenue sharing is not resolved soon, Ruffolo warned, “it will have a ripple effect on all the stakeholders in the city.’’

Gov. Andrew Cuomo announced in 2013 an agreement with the Seneca Nation over casinos and casino revenues.

The Senecas had not paid for four years nearly $600 million in casino revenue sharing revenue. The Senecas said the state had breached the original 2002 gambling compact that gave the tribe exclusive rights to operate casinos in a large area of Western New York.

But the new agreement marked “the beginning of a new chapter” between the Senecas and the state, Cuomo said at that time.

That new chapter lasted four years. Earlier this spring, the Seneca Nation surprised state officials when it said quarterly transfers to the state – amounting to more than $110 million annually – were ending.

The Senecas pointed to the wording in the 2002 compact that required the Nation to share 25 percent of slot machine revenues.  But the compact specifically noted that level of payment was due in years 8 through 14 of the compact. That left silent – at least in writing – what happens for the remaining years on the deal.

Now that the  Seneca payments have stopped, Buffalo city officials are looking at a deficit of $7 million, or about 1.4 percent of the city's total budget. Mayor Byron Brown is "confident the situation will get worked out,'' said Michael DeGeorge, his spokesman. But he did not provide specifics on how the shortfall will be closed.

Erie County is better off. An unexpected rise in sales tax revenues is expected to nearly match the casino revenue loss,  giving the county a one-year reprieve.  County officials had been hoping to direct that extra sales tax money to helping close a deficit caused by county payments for indigent care provided at Erie County Medical Center.

In Salamanca, which received $2.9 million in casino money last year, officials have squirreled away two years’ worth of revenue from the tribal revenue sharing “just such an emergency,’’ Mayor Michael Smith said.

“We do urge the Governor and (Seneca Nation) President (Todd) Gates to meet and resolve the issues. We are caught directly in the middle,’’ Smith said in an email response.

While Cuomo in April told Gates he wanted to meet over the disagreement, no meeting has yet been held. One was scheduled a couple weeks ago, but Cuomo canceled it.

The Seneca Nation on Wednesday said the 2002 compact is “crystal clear” on payment obligations and that such revenue sharing is now over. President Gates has been “steadfast in his willingness” to meet with Cuomo, said Phil Pantano, a Seneca spokesman.

The governor’s office is working to schedule a meeting with Gates but the sides have been unable to reach an agreeable date, said Richard Azzopardi, a Cuomo spokesman.

“As we’ve said throughout this ordeal, the Seneca Nation has an ongoing obligation to pay under the compact that grants them exclusivity rights across the entire region and reserve the right to pursue arbitration,’’ he added.

Many affected bystanders have not immediately cut spending on programs, but that could end.

"Right now, the hope and encouragement is the two sides will communicate and talk and get some resolution to this. The urgency is now,’’  said Mark Laurrie, superintendent of the Niagara Falls School District.

The district has received about $750,000 a year for the past 14 years, and used the money to help finance new school building roofs, labs and sports fields.

“Without that funding, it will leave our budget less $750,000 of expected revenue that we’ll have to make up either by cutting programs or going to a reserve fund,’’ Laurie said.

Niagara Falls' Medical Center officials are considering a delay in the third phase of a major renovation of its parking garage complex. The hospital has gotten $750,000 annually in casino revenue sharing for 14 years and used the money to build two new behavioral health offices, a renal dialysis center and create other programs throughout the county.

The hospital’s Ruffolo worries about the funding loss, but his immediate concern is for the city’s finances. The casino revenue, which totaled $11 million in 2016, is “critical” to Niagara Falls, he said.

“There has to be a continued sense of urgency for meetings to be held and discuss to be held,’’ Ruffolo said.

He believes this latest dispute is more serious than the one between the Senecas and New York that began in 2009.

Like others dependent on the dispute’s outcome, Ruffolo is not taking sides. The hospital has working relations with the Seneca Nation and its board includes Seneca representatives. The hospital also relies on state funding each year.

“For five months, there hasn’t been dialogue. The sense of urgency has to be daily, daily, daily. Somebody shouldn’t be sleeping at night. It can’t just be a monthly letter or statement,’’ Ruffolo said.

Acquario, the head of the statewide association of counties, said he is hearing constantly from officials in the 16 affected counties asking about updates to the slow pace of negotiations. Acquario said counties believe the Senecas want to continue to share a portion of slot revenues with localities, and the Senecas have talked of continuing “partnerships” with local governments; the Seneca Nation has not yet said how that will work, however.

“The longterm viability of this region is very important to all parties and I think that’s what’s going to get these two sovereigns together,’’ Acquario said.