Low bridge, everybody down

It's a song everyone who lives along the Erie Canal knows, but the boats that navigated the canal can be viewed only in a history book.

The 88-foot "Lois McClure," a replica of an 1862 sailing canal boat, will be on display in area canal communities for the next two weeks, beginning Thursday in Medina.

The boat will stop in Lockport on Saturday and Sunday, Tonawanda on Tuesday, Canalside in Buffalo Aug. 18-20, and in Middleport on Aug. 23 before continuing its journey east on the canal to Albany.

There is a lot of "shock factor"and emotion from people who experience the Lois McClure, said Capt. Erick Tichonuk, who is co-director of the Maritime Museum. 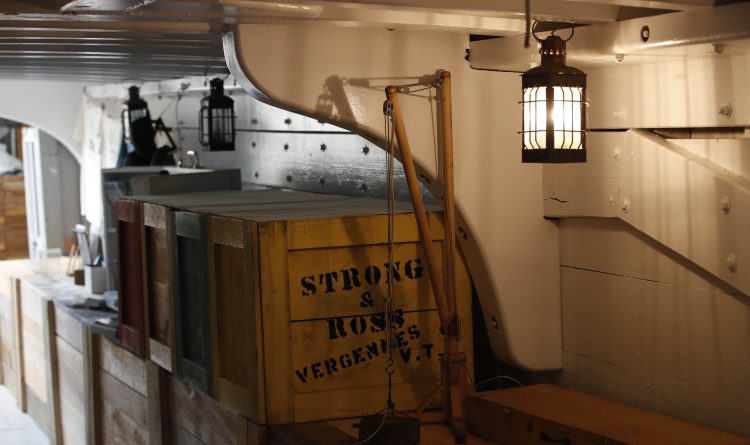 A replica canal boat called the Lois McClure will be traveling through Western New York to celebrate the 200th anniversary of the Erie Canal. (Sharon Cantillon/Buffalo News)

The sailing canal boat is a recent discovery, according to Tichonuk, who started his career with the museum as an underwater archaeologist. He said sailing canal boats were designed to be able to sail in open waters. For the canal, the masts were removed and mules took over to haul the boat.

Tichonuk said that researchers started documenting shipwrecks of sailing canal boats on the bottom of Lake Champlain about 25 years ago. The wrecks confounded historians, who had never heard of them. He said they measured every element of one of these boats to build the Lois McClure.

The Lois McClure has been on the water for the past 13 years. It has no engine, so it is pulled by mules or a tug boat, or sailing in open water.

"Unlike packet boats, which carried people, these boats were like the tractor-trailer of the 19th century. They were designed to haul freight," said Tichonuk. "They were not particularly attractive, but they were functional – like long boxes designed to haul as much cargo as the canal would allow them to do."

He said these types of boats often were owned by families who lived on their boats.

People will be able to tour the entire boat from the deck to the cargo hold to the cabin and ask the crew questions about the boat's history. However, there won't be any rides.

"We built the thing so authentic that it is not Coast Guard approved to take people out on the water, only on the dock," said Tichonuk.

The boat will carry tree seedlings that will be planted along the way to represent the story of the white oak and white pine used to build canal boats in the 19th century.

Tours are free, courtesy of the New York State Canal Corp. It has partnered with the state Department of Environmental Conservation and the Lake Champlain Maritime Museum for the "Legacy Tour," which celebrates the 200th anniversary of the start of construction on the Erie Canal.

More information about tour times and the Lois McClure is available at www.lcmm.org.

The Buffalo You Should Know: Before there was Canalside …