As I write this article, it’s simply too soon to try to predict cloud cover for eclipse viewing on Aug. 21. Yes, there are models that go out that far in time, but forecast skill for cloud cover in this time range, with or without models, is virtually nil for much of the country, including our region.

Most of you know Western New York is not in the path for totality in this eclipse. However, the amount of the sun’s disc that will be covered by the moon is still quite substantial, as viewed in this NASA map: 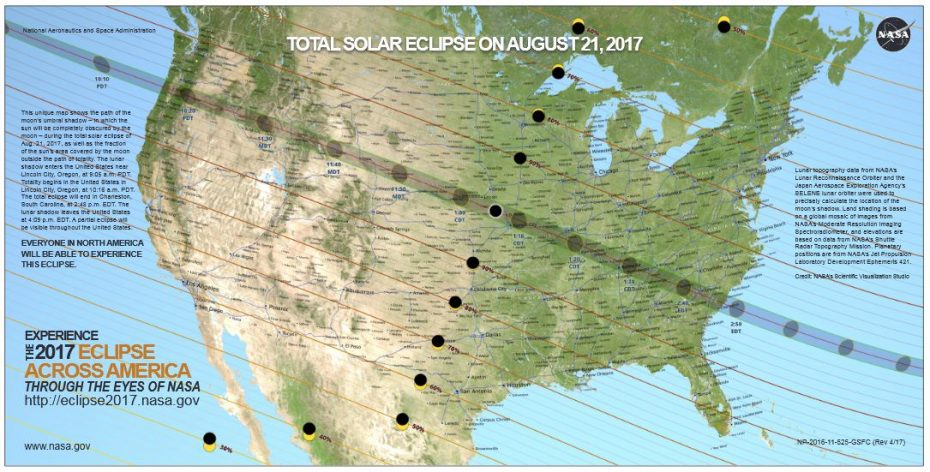 Just take a look at the coverage near our latitude with the sun/moon icon. The impact here will be significant, more than 72 percent. Needless to say, viewing will require the proper precautions with filters to protect your eyes. Here are the technical recommendations from NASA.

As for the coverage and timing of coverage, NASA offers an interactive map that allows you to click with a steady hand on your location to get the precise amount of coverage (assuming good sky conditions for viewing) and the timing in universal time (UT). Universal time is four hours ahead during daylight saving time, so 18:00 UT is 2 p.m. Eastern time. For Buffalo, maximum coverage is 72.1 percent at 2:33:56 p.m. Eastern, if you want to be precise.

Weather changes from the passage of the moon’s shadow are greatest, of course, where totality occurs. Past observations indicate a measured average temperature drop of up to 5 degrees Fahrenheit during passage.

There’s nothing surprising about that cooling. Admitting that I’d never given much thought to this topic other than the modest cooling, I was a little surprised to learn that wind speed actually dropped, albeit slightly, in the shadow of the moon. While true heating creates more atmospheric mixing and a breeze, I thought relatively sudden cooling might increase the air density enough to produce a small cool gust front at the edge of the cooling, on a much smaller scale than the cool outflow from an approaching thunderstorm. The wind speed drop, according to a study performed by England’s University of Reading, was small, only averaging 1.6 mph.

Still, if that seemed counterintuitive to me, it’s probably because I’d never given much thought to this topic. (By the way, AccuWeather claims the cooling in totality is far greater than 5 degrees, coming closer to 20 degrees, and that an 1834 eclipse produced a 28 degree drop at Gettsyburg.) There is also about a 20 degree counterclockwise shift in wind direction. That is, a southwest wind will become more southerly.

In general, other impacts in areas with partial rather than total coverage will be more subtle. In totality, the sky would become dark enough for some stars and planets to become visible. At our location, it’s possible you might be able to faintly see Mercury, but it’s unlikely.

There is also an impact unrelated to the totality shadow. When the moon is directly between Earth and the sun, the sun and moon’s gravitational tidal force causes the earth’s crust to bulge out about 40 millimeters. So a 5-foot-7 guy like me can pretend he’s 40mm taller than usual. On the other hand, when I was younger I was 5-foot-8, so big deal!

By missing totality, we will also miss the opportunity to observe animal behavior changes, some of which are anecdotal and unproven and some of which have been repeatedly observed. In previous eclipses, it’s been reported that livestock return to the barn with the onset of the darkness. The California Academy of Sciences reports that squirrels retreat to their dens and birds stop singing, while dogs and cats can act confused.

There is no evidence totality has any physical effect on humans. However, it’s not hard to imagine how this phenomenon might alarm some people who are unaware of just what a total eclipse is and are caught off guard by it.

Now that you’ve read this, hopefully you won’t make the same mistake Ralph Kramden made from the quick onset of darkness: