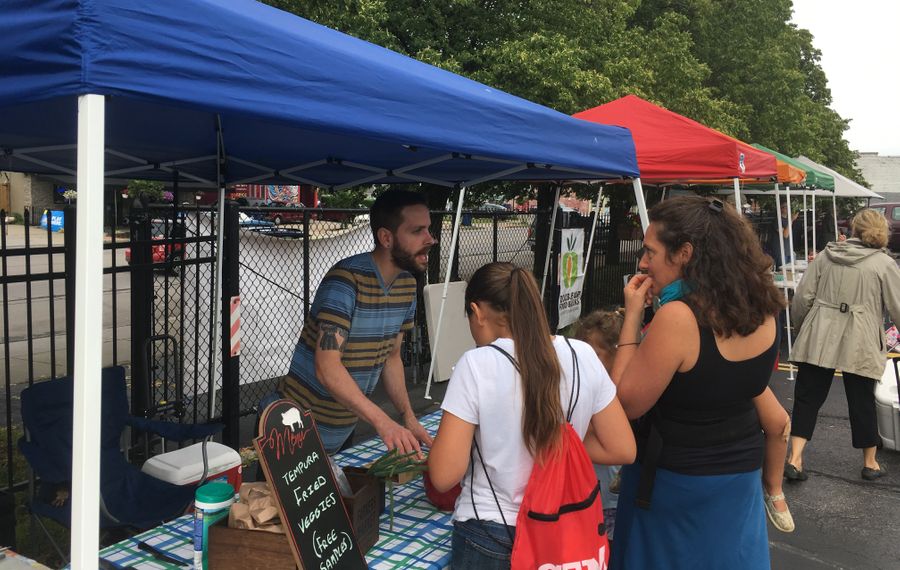 We are in the thick of the homegrown season. So if you’re wondering just what to do with zucchini, visit the North Buffalo Farmers Market to become inspired.

“Local produce and a farmer's market was something North Buffalo was lacking for a long time. Patty changed that by starting the market,” said Keating, who also lives nearby. “One day coming home from work, I stopped. Patty recognized my Joe’s Deli shirt and introduced herself. After a couple more meetings at the market, she approached me about doing the culinary table."

The market was established in 2014 by Patricia Banning, who had moved to the neighborhood and realized there was no market.

It started off slow, but after year two, Keating said Banning invited him to take on a more permanent role. Now the culinary table is more established, and they’ve reached out to other chefs to take a turn showcasing their talents.

Each Thursday Keating arrives at the market to talk with vendors and see what’s available.

“After walking around once, I pick ingredients and create a dish to pass out,” said Keating. “One of the reasons I do this is because I think it’s important that this market sticks around so people in North Buffalo have access to fresh, local produce and products.

“There are many farm-to-table restaurants in Buffalo who use local vendors, and it’s great. But the market opens these vendors up to a whole new customer base,” he continued. “To be able to pass out samples to marketgoers, to showcase the local products, and show them different ways they can utilize them at home, that’s why I do this each week.” 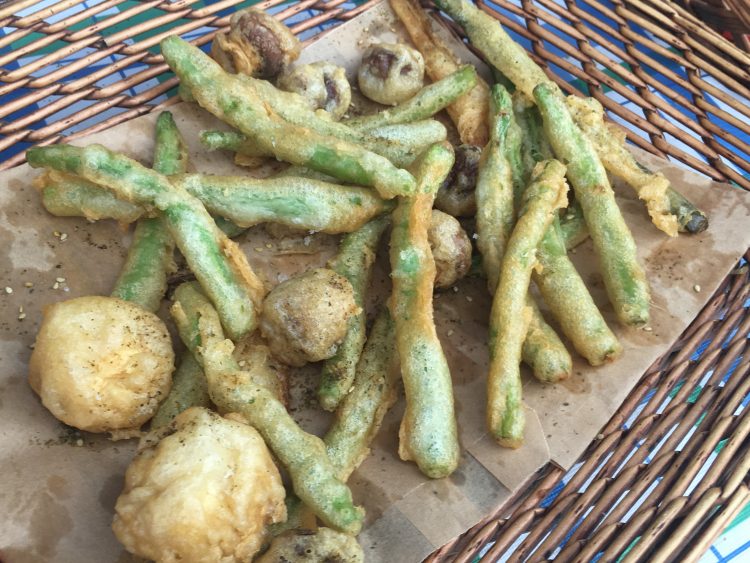 Keating said he enjoys the rapport with the vendors, who often donate their items for him to use. In return, he shows folks at the market how to create something different at home with their purchases. One example is deep-fried tempura fresh green beans and mushrooms served with a cilantro lime dipping sauce.

“Customers at the market love to try new things, and I like giving them news ideas to try at home,” Keating said.

Keating’s favorite items to work with are uncommon purslane (greens) and kohlrabi (a bulb with greens).

“Purslane is a very healthy green which some people consider an invasive weed. Kohlrabi is a vegetable that’s cultivated in many different countries that can be prepared different ways. I like being able to cook with things that people shy away from usually so that they don’t have to shy away from it anymore,” he said.

But how many ways are there to cook that common (and abundant) zucchini?

“There are approximately 100,642 ways to prepare zucchini,” he said with a smile.

The North Buffalo Farmers Market is from 3 to 7 p.m. Thursdays at the Holy Spirit Church, 1113 Hertel Ave., near the corner of Delaware Avenue. Keating notes that chefs from Lombardo’s and Burning Buffalo Restaurant and Bar will be guest cooking as well this season.