They look like your everyday, ordinary potato plants. However, the three growing in a small garden in Lackawanna may be unlike any on Earth.

That’s because they’ve been to space and back.

The plants, in fact, may hold clues to a question that has garnered widespread attention since first posed as a middle school science project by three girls from Buffalo: Can potatoes grow in space?

The answer is buried in Andrew Franz’s backyard.

“That’s a potato right there,” boasted Franz, as he dug up a baseball-sized spud from the garden. “I didn’t think they’d be that big.”

His backyard potato crop brings to conclusion an unusual science project conceived in 2015 by three of his students at Hamlin Park Academy – Gabriella Melendez, Shaniylah Welch and Toriana Cornwell. 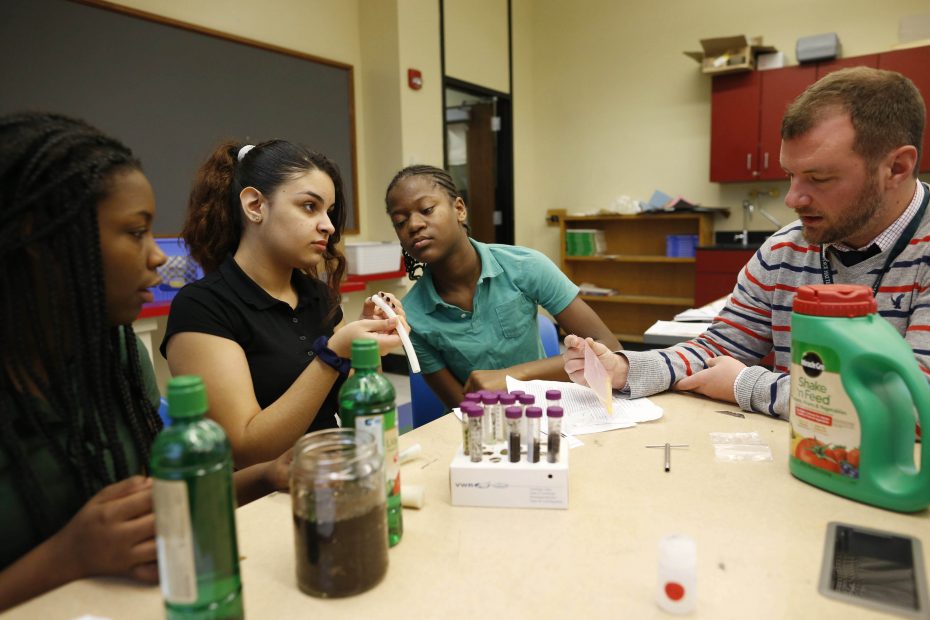 From left, Hamlin Park Academy students Shaniylah Welch, 13, Gabriella Melendez, 12, and Toriana Cornwell, 13, and teacher Andrew Franz prepare to plant potato seedlings while doing research for an experiment that was conducted in space aboard the International Space Station in this file photo from Dec. 23, 2015. (Derek Gee/Buffalo News)

They were inspired by the 2015 Oscar-nominated movie “The Martian,” the science-fiction flick starring Matt Damon as an astronaut who’s abandoned on Mars and grows potatoes to survive. The students wanted to investigate whether space travel affects a potato’s ability to grow. As one of 21 experiments selected in a national science competition, the young “Spud Launchers” got their chance.

The girls squeezed 11 seed potatoes into a small, half-inch tube and, in February, made the trip to Cape Canaveral, Fla., to watch the launching of their experiment to the International Space Station. Their potato project orbited for 28 days inside the science laboratory 249 miles above the Earth, before it was returned to the planet for planting in a greenhouse at the University at Buffalo.

Then, the girls waited.

The experiment could have been disastrous when UB biologists found an infestation of tiny worms that had been dormant and hatched. But after treating them, five of the space spuds eventually sprouted.

The young scientists had reached their conclusion.

Did space travel affect the potatoes?

No. When the girls tested the potatoes in the lab, they found no difference when compared to the 10 Earth-bound potatoes planted as a control crop.

So, can potatoes grow in space?

“But,” said Franz, the girls’ adviser for the project, “still more research would have to be done. I think you would want better numbers than five out of 11.”

The experiment raised a basic, but important question, especially considering the talk about longer space missions or even one day planting crops in a controlled dome on Mars.

“I don’t think anyone has quite done this from this perspective. There may be something out there, but nothing I found,” said James Berry, a professor of biological sciences at UB. “I think this was really unique.”

For the students, it was challenging, hard work, too – logging hours after school or in the lab at UB, where the girls worked with Berry and colleague Mary Bisson.

But it was also fun, Gabriella said.

"Everything isn't easy," said Gabriella, the team's principal investigator, "but you can have a group of people who are interested in the same thing and get the job done."

And it goes to show what kids can achieve when given the opportunities, Berry said.

“I've got to say, they were really good,” Berry said of the three girls.

“I thought I would have to sit and look over their shoulder, but they wanted to work independently – and they did,” Berry said. “They were very enthusiastic and very smart. I was very impressed.”

In fact, for Gabriella the experience has opened a whole new world.

She had always been iffy about science, but the project made her understand there is so much more to it than she thought.

"I realized I enjoyed it," she said, "and that it's something I would like to do in the future."

The Spud Launchers have since graduated from Hamlin Park and attend different high schools. Shaniylah is at McKinley High School in the horticulture program. Toriana is at the International Preparatory School at Grover. And Gabriella is headed to Hutchinson Central Technical High School in September, where she will major in biochemistry.

In June, Franz took three of the potato plants from the UB greenhouse and replanted them in a small garden in his backyard so he could look after them during the summer. Berry took the fourth plant, while the fifth was handed over to the Buffalo and Erie County Botanical Gardens.

On a recent, sunny afternoon, Franz took out his garden gloves and trowel. He dug up the largest of the three plants in his garden to reveal the harvest – eight hearty potatoes of various sizes.

“I’m pretty happy,” said Franz, as he stared at the crop. 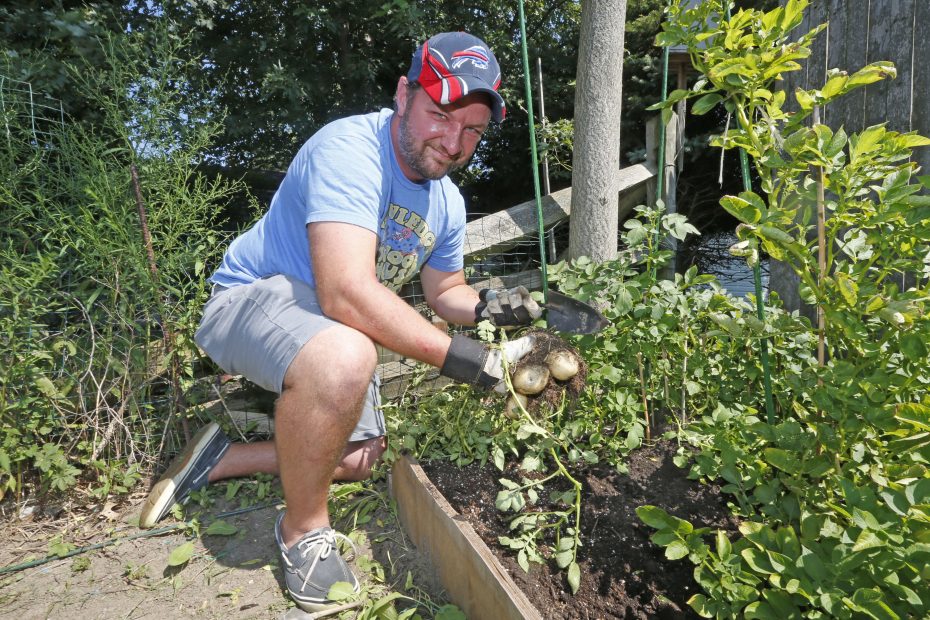 Andrew Franz checks out potato plants grown from seeds that germinated in space aboard the International Space Station. Franz, a teacher at Hamlin Park Academy in Buffalo, planted the plants in his Lackawanna backyard garden. (Robert Kirkham/Buffalo News)

“For that little potato to store up all that starch and make these,” Franz said, “we’ve come a long way."

Meanwhile, WNY STEM Hub, a local nonprofit organization that steers kids toward the fields of science and math, is again hoping to raise the money needed for the next crop of student scientists to compete at the national level and the chance to take part in Mission 12 of the Student Spaceflight Experiments Program.

As for Franz, he will refrigerate the potatoes so they can be planted in community gardens across the school district. They will produce the next generation of space spuds, and the next – a reminder of what three girls from Hamlin Park were able to do.

Of course, Franz also picked out a nice big potato for the team – to celebrate.

“We’re going to make some french fries,” he said.