The boys stepped off the bus and into the cheering crowd that awaited them.

One by one, they waded in between the two long rows of men who welcomed them with handshakes, hugs and hollers, as if they were a sports team running out of the tunnel onto the field.

Instead, Monday's celebration at McKinley High School was for the launching of "My Brother's Keeper," a new initiative in the Buffalo Public Schools designed to intervene in the lives of black and Hispanic youth and set them on course toward a better future.

Introduced by then-President Barack Obama in 2014, My Brother’s Keeper relies heavily on mentors to steer students and keep them on track.

More than $1 million in state grants awarded to Buffalo also provides funding for multiple other strategies – college-readiness programs, efforts to engage families and training more minorities as classroom teachers. A partnership with Medgar Evers College, a predominantly black institution in Brooklyn, will be another component of the initiative to help Buffalo's boys of color increase their academic confidence and expectations for the future.

Consider: One out of every three students in the Buffalo schools is a black or Hispanic male and, as a whole, they perform worse than their white peers in both math and English language arts, school district data show. A smaller percentage of them graduate high school, too. 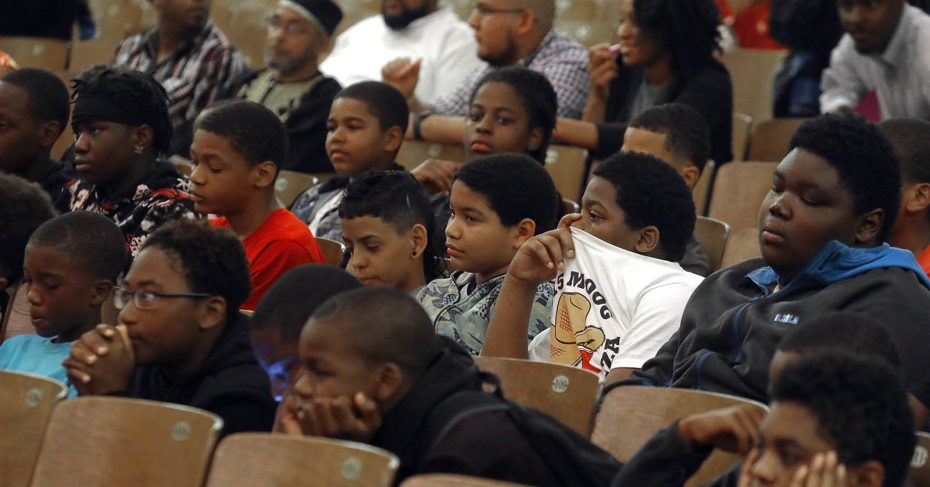 "What do you want to be?" David Mauricio, the district's chief of strategic alignment and innovation, asked the the group of boys during Monday's kickoff assembly. "In the end, setting that goal will set you up with a plan to get there, because if you don't have a vision, any path will do."

While Monday's event sets the stage for My Brother's Keeper to ramp up at the start of school, it specifically marked the launch of an all-male academy that will run at least one day a week after school and two Saturdays a month for 150 seventh- and eighth-grade students.

The boys will benefit from the mentorships, learn about their heritage and be taught skills they'll need to be successful in life, explained Fatima Morrell, an assistant superintendent of curriculum.

"We want to follow these young men all the way through high school," Morrell said. "Right now, we have 150 young men – and we hope that will only grow."

Dozens of men – mostly African-American of all ages and walks of life – were in line Monday waiting to welcome the boys and ready to pitch in as mentors when called.

Marchon Hamilton II was there.

"It starts now, it starts here," said Hamilton, 32, a campus minister at the University at Buffalo.  "You have to plant the seeds at an early age."

Judson Price was there, too.

"I think many of us received something from someone else to help us believe we could do something," said Price, 86, a retired teacher long active in the community. "I want to pass that along as much as I can."

Kasumu Jamio said he wants to help kids see where they can go in life – and show them how to get there.

"This is about building intellectual warriors of tomorrow," said Jamio, 36, who runs an after-school program. "That's how I view it."

And Archie Galloway said he just wants to let the boys know there are men who want to see them succeed.

Galloway hoped the men made their point during their first introduction, as the boys stepped off the bus.