Tosha White, based on all she's seen, has a theory about cascading violence in Buffalo. She grew up in neighborhoods racked by bloodshed, places where sidewalk memorials to murder victims are all too commonplace, in a city where the incidence of people being shot rose 18 percent last year.

White has her own take, her own analysis, on what's gone wrong – and what would fix it. Yet to fully appreciate her vision requires knowing where she's been.

Or, most important, where she's going.

White, 24, works at Squeeze Juicery on Elmwood Avenue. Meeting her is like a sunrise, a burst of warmth and a fast smile, an impression that quickly wins over customers. A few months ago, she graduated from Medaille College with a degree in communications, and her mission now is deciding the best strategy for her career.

That dream goes to the heart of her point.

Her mother left her family when the child was 6 or 7. She speaks with deep appreciation of her father, Larry White, whose diabetes eventually took both his legs.  The illness makes it impossible for him to work.

"But he's kind of where I get my energy, my personality," White said. "He's always glad to see another day."

When White was 9, an electrical fire ignited while she and her father slept. Larry woke up and alerted his daughter. They made it out, but the flames took everything they owned. For months, they lived from home to home, "from couch to couch," White said, every day built around a search for a place to sleep.

White remembers going to school in the morning with no idea of when and where she'd get a meal. Too many children face that same uncertainty, she said. The subsequent anxiety, which they try not to reveal, makes it hard for them to see schoolwork as a priority.

In White's own situation, her father sought advice at St. Luke's Mission of Mercy on Walden Avenue, where Amy Betros – one of the founders – helped them move into a house the ministry owns.

St. Luke's is where White would do her homework in the evening. It is how she met Mike Taheri, a lawyer deeply involved in the mission's educational ministry.

"What I remember," Taheri said, "is that my wife, Josette, and I were chatting with Tosha, and we asked her about her goals, and she said: 'I don't want to get pregnant, and I want to go to college.'"

White, at the time, was not yet in high school. Her philosophy, at such a young age, stunned Taheri. She told him that many of her teenage friends already were having children, and she explained why that reality frightened her.

"I know how it feels to grow up with a struggle, and I didn't want my kid to grow up in that situation," she said. "I thought I needed to learn how to love myself before I could really love another human being."

Taheri became her mentor, "a second father," as White puts it.

They set up a regular schedule of tutoring sessions, which White honored like clockwork. Once, to better understand what White coped with every day, Taheri drove to her East Side home, and then followed behind her – from city bus to city bus – as she went to school at the Buffalo Academy for Visual and Performing Arts.

It took her 45 minutes, one way, to get to school. That meant she was getting up in the morning, preparing for class, spending 90 minutes a day on the bus – and handling her homework while doing whatever she could to help her father.

Taheri's support allowed her to get through it,  White said.

Abruptly, as they spoke of those days, White wept. Her tears triggered the same reaction in Taheri.

She recalled moments when her studies seemed impossible, when she believed her math classes were too difficult, when she doubted she could graduate. Taheri was relentless about the discipline of studying, but he also asked White to take part in group dinners involving other students from St. Luke's, all of them facing significant obstacles.

Something in the gentle grace of sharing a meal reinforced the quality Tosha said means everything:

She graduated from high school. With Taheri's guidance, she found her way to the Trocaire Opportunity Program, which allowed her to attend Trocaire College. She went on to Medaille College, and an internship at the U.S. Attorney's office.

In May, when she walked the stage at Medaille, she became the first person in her immediate family to earn a four-year degree.

That journey speaks to her larger point. 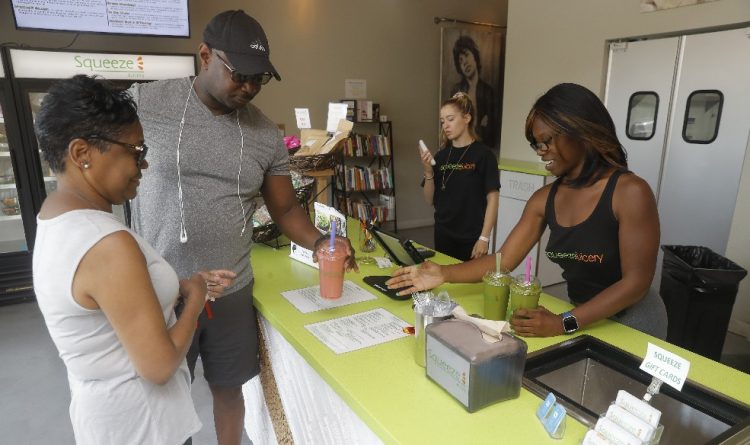 Tosha White waits on customers last week as part of her job at the Squeeze Juicery on Elmwood Avenue. (John Hickey/The Buffalo News)

She has seen violence on the streets. She understands raw fear. She remembers being in a store, as a child, when a customer became enraged, started screaming and pulled out a gun. White, terrified, fully believed he was about to start shooting. Even now, she can put herself in that moment.

What keeps her awake at night, she said, is whenever she sees toddlers or tiny children in situations where they've been emotionally abandoned, their young parents lost to addiction or the drug trade. At those times, White knows the solitary 3-year-old staring at her from a front yard is being raised amid emptiness, fury and despair.

For those children, she said, the journey to street violence is hardly a mystery.

All of it rolls together into her theory, with her own experience serving as her best solution.

Violence erupts, she said, "because these kids are feeling empty. They have a void that needs to be filled, and they'll fill it with whatever they see, whatever they know, and a lot of times that becomes drugs or crime.

"They need help. They need to believe in something more. And a lot of them don't have someone to show them how."

In that way, White said, the fire that destroyed her home was a kind of blessing.

"My life changed because of it," she said.

It brought her to St. Luke's, to a community that saw her full potential. It put her in touch with the Taheris, who gave her the one gift Mike Taheri believes can make a difference, the gift that can seem overwhelming when set against the level of sheer need:

"This is ministry, and it's different than being a volunteer," Taheri said. "It's about service and consistency, and it's not about the convenience of the mentors. Tosha excelled because she persevered and accepted opportunities when the doors opened."

Downtown, gleaming buildings are rising from the ground. Millions are being spent on new development, on the waterfront, on medical facilities that supposedly speak of a turnaround. Yet a defining symbol of whether this city can truly ascend sat last week by a storefront window on Elmwood Avenue, a once-homeless child contemplating the best use of her degree.

For a new Buffalo, Taheri said, look toward Tosha White.

Sean Kirst is a columnist with The Buffalo News. Email him at skirst@buffnews.com, leave a comment below or read more of his columns in this archive.