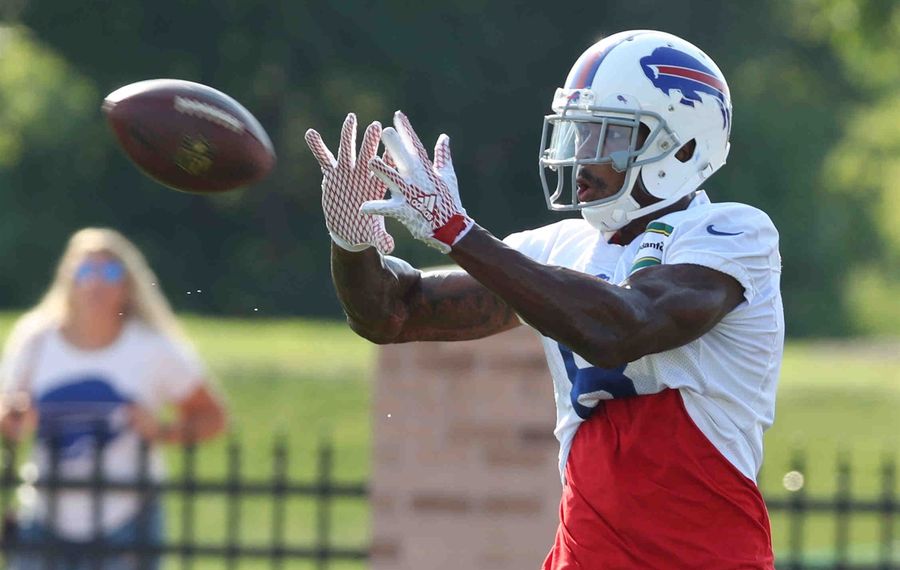 Buffalo Bills fans know all too well the struggle Sammy Watkins has gone through in trying to return from a broken bone in his left foot.

Multiply that by two and you have what Rod Streater has dealt with.

“My third year (in the NFL), I broke both of my feet. I had the same thing Sammy Watkins had, except I had it on both of mine two months apart,” the Buffalo Bills’ receiver said after a recent training camp practice at St. John Fisher College. “It’s serious, man. It takes, I want to say, a good year off your feet to come back and really get going.”

Signed as a free agent in late May, Streater has turned heads through the first week of training camp. In what is a wide-open competition for jobs behind Watkins and rookie Zay Jones, Streater has put himself squarely in the mix.

“He's one of the highlights of camp so far,” coach Sean McDermott said. “Big, strong wide receiver. Did a nice job of digesting the system in a short amount of time. His role on not only the offense, but also special teams factors into the entire evaluation. He's done a nice job. I look forward to continuing to watch him.”

Streater entered the NFL as an undrafted free agent with the Raiders in 2012. He did more than just make the team, as he was in the starting lineup for Week One. He finished his rookie year with 39 catches for 584 yards and three touchdowns. Those numbers improved to 60 catches for 888 yards and four TDs in 2013.

The following season, however, injuries struck. Streater had his first surgery in October 2014 on his right foot. A second followed in January 2015 on his left foot.

“Then I rushed back into OTAs with the Raiders,” Streater said. “It was a bad situation. I didn’t give myself time to recover.”

Streater’s 2015 season was a wash — he played in just one game and made one catch for 8 yards. He signed a one-year contract in 2016 with the Kansas City Chiefs that had a potential value of $4.8 million, but was traded to the San Francisco 49ers before the season started. He had 18 catches for 191 yards and two touchdowns in appearing in all 16 games.

“I had to rehab, go through that whole process and get used to running on both my feet again,” he said. “I just feel like I'm where I need to be right now. Everything happened. My feet feel great. I'm excited to be here, to be healthy and make plays.”

Streater’s been doing that since the start of camp, consistently impressing while running with the second- and third-team offenses.

“He's just doing what he's been doing since he got into the league. I spent three years with him in Oakland and he's always been a big playmaker," fellow wide receiver Andre Holmes said. "He just had an injury that slowed him up a little bit. Right now I'm seeing the same 'Street' that was starting in Oakland. He's really doing a lot of good work."

Streater credited Holmes with helping him get up to speed quickly.

Streater's familiarity with the Bills doesn't stop with Holmes. He was in training camp last season with the Chiefs, where his position coach was David Culley, who currently serves as the Bills' quarterbacks coach. Additionally, Bills running backs coach Kelly Skipper was on staff in Oakland when Streater played there.

"They knew what I could do," he said. "I wanted to be around guys who knew me and would give me the opportunity."

So far, he's making the most of it.

"I'm starting to get it," he said. "The first couple days was hard on the legs, but now I'm kind of getting my second wind and feeling good. ... I'm just trying to continue to make plays any time the ball comes my way."

The Bills have 12 wide receivers on their 90-man roster, so that leaves 10 of them competing for at most four spots assuming Watkins and Jones are roster locks.

"It's a bunch of competition," Streater said. "Wherever you are, you're going to have to work, make plays. It's all about what you can do right now. It's not about what you did in the past."