Three weeks after Kristina Gassman learned that her 4-year-old daughter's debilitating exhaustion and mysterious bruises were symptoms of leukemia, she walked out of the Buffalo Ronald McDonald House on West Ferry Street with her two sons.

It was morning, and they were on their way to spend the day with Claira at Women & Children's Hospital a couple of blocks away.

Wyatt, 8, got to the first steps leading down from the Colonial Revival mansion when he spotted a little stone painted yellow and blue. A minion.

Then on the second set of steps, Landin, 7, found a second one. An orange fish painted on a blue, ocean background with the word "swim."

The boys were thrilled, and Gassman was floored. They turned the stones around and saw a message telling them to go to "Sweet Buffalo Rocks" on Facebook.

Gassman took photos of the painted stones and posted them to Facebook on Monday:

"To who ever hid these next to Ronald Mcdonald house yesterday," she wrote. "Thank u so much. My daughter has been in the hospital for three weeks now. And when my boys found them they were the most excited I've seen in a while. They took them to their sissy and said they were her good luck rocks. Thank u so much." 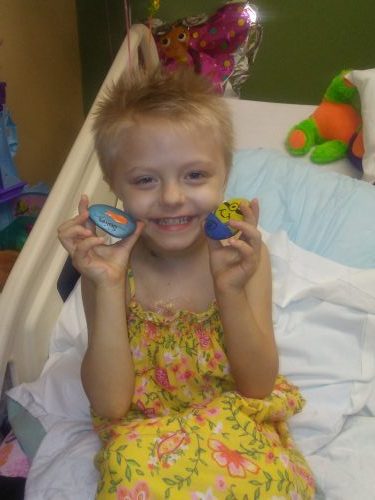 Claira Gassman, 4, who is being treated for leukemia at Women & Children's Hospital, holds painted rocks her brothers found on their way to visit her. (Provided by Kristina Gassman)

Sweet Buffalo Rocks is Western New York's incarnation of the painted rocks trend that's caught on across the country, particularly among moms and crafters.

Moms and kids and people who just think it's a fun idea are painting rocks every way they can think of. Swirls of color and cartoon characters. An ice cream cone. Polar bears. Monsters. Pirates. Lots of minions (from the "Despicable Me" movies), Pokemons and Ninja Turtles. Some bear messages: "You are beautiful the way you are." "Be humble." "You rock." "Go Bills!"

They're being hidden – and found – in parks and playgrounds. People like leaving hints on the Facebook page about where to find them and report their discoveries.

"Hidden in a Hamburg pediatric doctor office. It's not next to a "big tree" but, can be found near some flowers!!"

"We found this really cool rock at Allegany State Park last week while camping. We'll re-hide for someone else to find."

Kimberly LaRussa first learned about the trend from a friend in Florida.

"Kim, you have to bring this to Buffalo," her friend told her.

LaRussa, who runs the blog "Sweet Buffalo," loved the idea and decided to try to get it going here. (Full disclosure: LaRussa is a community content producer for Western New York Pennysavers & News, which is owned by The Buffalo News.) This past winter, she painted a rock and after grabbing lunch at La Nova pizzeria on the West Side, she hid it nearby.

"I felt really strange doing it," she said.

She posted about it on her new "Sweet Buffalo Rocks" Facebook page and then pleaded with her friends and family to do the same. They reluctantly went along and it started catching on. Soon about 500 people were participating, and LaRussa would see one or two posts a week from people either making or finding rocks. By midsummer, more than 4,400 people had joined.

Among them is Shannon Cercone.

"My best friend was doing it," said the Amherst mother of two. "She was like: 'You guys have gotta check this out.' "

She was hooked. She and her kids started out buying rocks at the dollar store, but now they love searching for stones while looking for other people's painted rocks.

"We went to a couple of local creeks," she said. "The kids love searching for the rocks as much as painting them. They'll say: 'Mom, this is the perfect one,' " Cercone said.

"We look on Pinterest for easy ideas," she said. "I'm not the best painter."

Her daughter Anna, 8, had a tough request – a unicorn. She managed. "It's not the prettiest unicorn," she admitted. But that's not the point.

They have found all sorts of places to hide them. The Charles E. Burchfield Nature and Art Center in West Seneca. Maplemere and Windermere schools in Amherst. Veterans Park in Kenmore.

Then there's the social media component. Cercone's children love it when someone finds their stones.

"They think it's the coolest thing," she said. 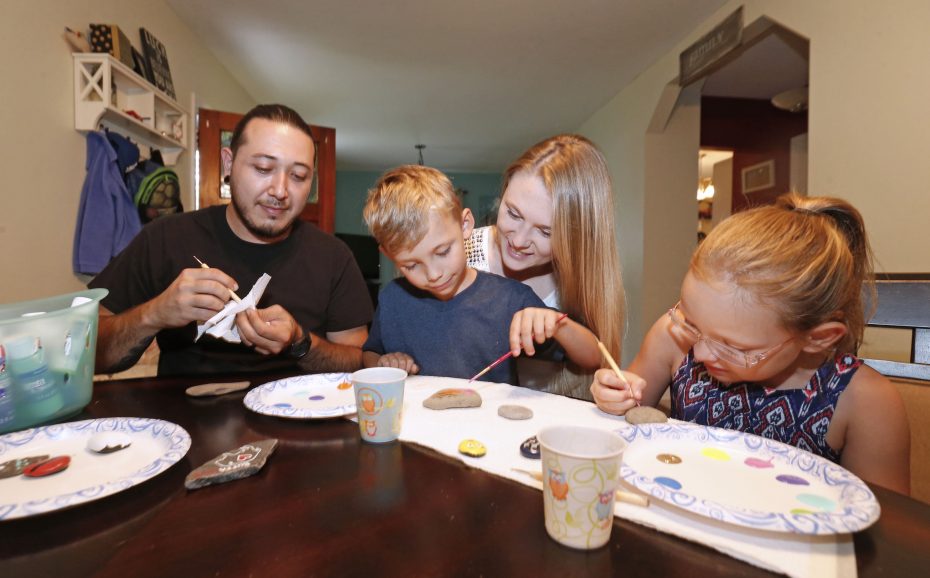 Heather Mancuso of North Tonawanda has taken to painting mandala patterns on stones.

She loves the idea of people finding her rocks but she also enjoys the process.

"I know this sounds silly, but I do it almost every night," she said. "It's a nice way to wind down at the end of the day."

Kathie Eisinger, an art teacher at the Newcomers Academy at Lafayette High School, has delighted in transforming stones into elaborate works of art.

"I'm a big Harry Potter fan, so the first one I painted was a Platform 9 3/4 one and I hid it," she said, referring to the magical train station platform the young wizards in the Harry Potter books take to get to their school.

She's made many more, including a lifelike hamburger and a widemouthed, toothy shark.

"In such a tech-based world – not that tech is bad – but sometimes, we need to come up with stuff from our brain and put it together," she said. "It's just a lot of fun."

She's planning on making some Buffalo-themed stones on trips she's scheduled to take to Cincinnati and Chicago.

"I just think it would be cool and see how far they travel."

Tia Rivera, who lives on the border of Buffalo and Cheektowaga, loves the way the painted rocks has brought her closer to her daughter.

She saw a friend's Facebook post about it and asked her daughter, Arianna, 9, if she wanted to try it. Arianna said she did.

"Her father actually joined in with us," Rivera said. "This brings our family together. You get to spend time together. And it's exercise. You're not just at home. It's bringing people together in a good way and that's what we need."

After finding a stone in Delaware Park, she posted it on Facebook and a woman contacted her and said her daughter had hit it. "We found each other and we were talking. So I thought that was pretty nice," Rivera said.

Gassman's son Wyatt found yet another painted stone Monday night, after they returned from the hospital. This time it was a happy face emoji.

"This is where I found it," he said, pointing to the bottom of a tree in front of the Ronald McDonald House.

Gassman said she'd like to start her own version of the painted rocks trend back at her home in Salamanca.

She loves the joy it's brought her children during a difficult time in their lives.

Her daughter is facing a tough battle. Claira has needed multiple blood and platelet transfusions and is fighting a fever. "She has her ups and downs," her mother said.

Claira's brothers and twin sister, Sara, have had a tough time too, being shuttled between relatives as the parents take turns staying with Claira at the hospital. The boys are staying with Gassman now at the Ronald McDonald House, which provides a place for families to stay while a child is hospitalized.

Since Gassman's post on Facebook Monday morning, nearly 200 people have "liked" or "hearted" her message and left encouraging words for her as of Tuesday.

"I just can't believe how many people are praying for Claira," Gassman said, "because of rocks."