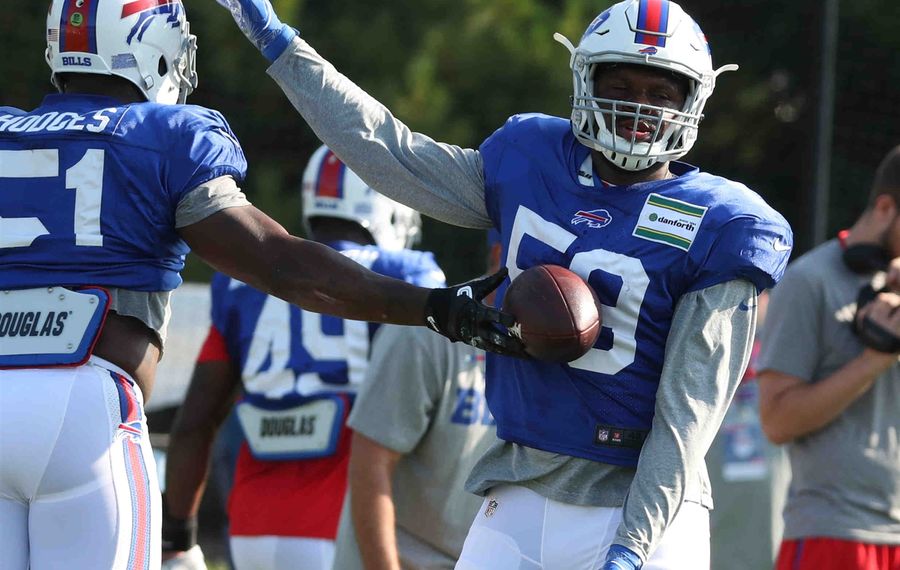 PITTSFORD -- The expected competition at middle linebacker for the Buffalo Bills has been one-sided thus far.

Through the first four practices of training camp, it's been all Preston Brown with the starters. That has meant second-year veteran Reggie Ragland, who missed all of his rookie year after suffering a torn ACL last summer, has lined up with the second-team defense.

Rookie Nathan Peterman will serve as backup QB vs. Eagles

Boldin: 'Not that diva mentality in our receiver room'

McDermott on skirmishes: 'That's exactly what I wanted to see'

"There's a plan for every player. Reggie's a ... second-year player coming off a knee injury," McDermott said. "Really, this is his first year, so acclimating him to practice tempo -- he missed most of the spring -- acclimating him to the system and putting him in position, like we try to do with all our players, to have success. Success early and success in the long term.

It's clear four practices into training camp that Ragland will have to raise his game if he's going to beat out Brown for the starting job. McDermott and his coaching staff analyzed the tape from Brown's first three NFL seasons, which included one year in Jim Schwartz's 4-3 scheme and the last two playing in Rex Ryan's 3-4.

He "had success in both," the coach said of Brown, but "really liked what we saw a couple of years ago in the 4-3. He looks comfortable. He's a leader just by the position alone.

"You watch him the other day, he had a blitz, made a nice adjustment on the fly and was able to get to the quarterback. He's done a nice job. Command of the defense will be important. And then his leadership has to be felt, not only with what's going on in front of him, but with the secondary as well."