Blood lines and rail lines run through the story of the newest brewery in Western New York, a small space filled with beer tanks, historic photos and an already well-worn bar in Clarence Hollow.

The tale starts with Anthony Borysik, who emigrated from Poland to Detroit in 1912, at age 15, before landing a railroad job six years later and moving to Buffalo.

local, who passed the same infatuation along to his son, Josh.

The Dziombas – along with Josh's wife, Laura – took an 18-month journey of their own before they opened West Shore Brewing Company, a name that pays homage to the railroad company where Borysik worked for 50 years.

"The family link always spurred a love of the history of railroads, especially when it comes to this region," said Josh Dziomba (pronounced Diz-ahmba). "Buffalo is doing a great job now embracing its history but its railroad history is often overlooked. At one point, we were the second-largest railroad hub in the country, after Chicago.

"When you start following the history of the old breweries, they were all intertwined. You would go to any of these little towns and you would find a brewery. It was right next to the river and it was serviced by rail."

The Dziomba trio is in the midst of a soft opening of their new brewery, adding to the number of their craft brews as they put the finishing touches inside a metal fabricated building at 10995 Main St., just west of Antique World & Flea Market.

The City of Buffalo has 10, with another planned on the Hertel Avenue strip.

"When I told people I was interested in starting a brewery, some asked, 'Don't we have enough of these already?' Look at how many bars there are," he said. "There's hundreds in Western New York. Everything goes in cycles. Breweries are moving back to what they were pre-Prohibition, pre-1900s. We're getting back to the point where every community had their brewery or breweries."

State laws that allow breweries to house taprooms and sell their own beer on premises will continue to fuel more openings, the Dziombas predicted. So no worries, craft beer lovers in places like Niagara Falls, Orchard Park and Tonawanda. Your day to grab a locally produced pint close to home might come sooner than you think. 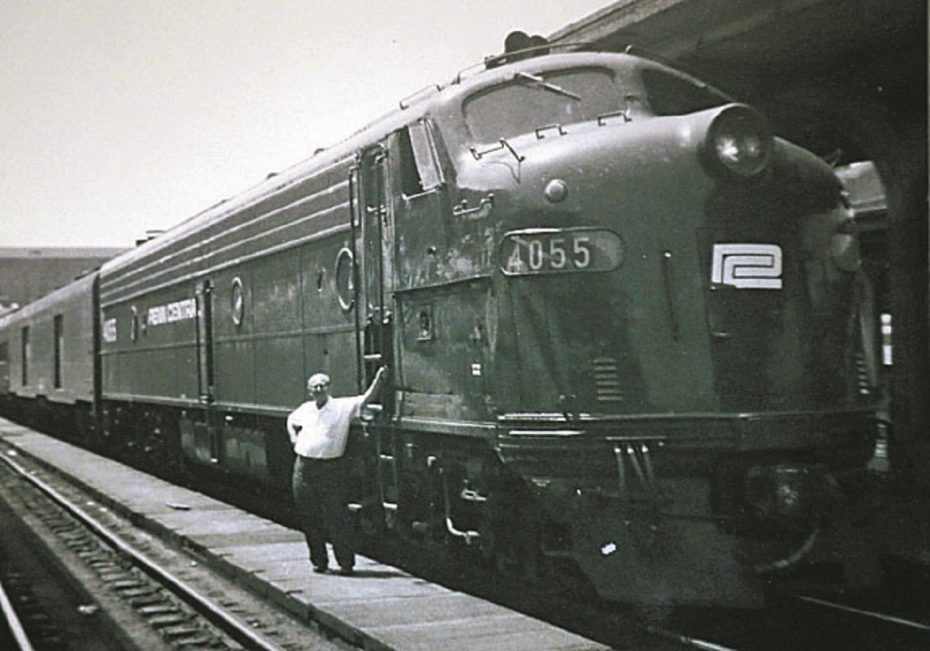 Anthony Borysik, great-grandfather of West Shore co-owner and head brewer Josh Dziomba, worked for a half century with the West Shore Railroad, much of it as an engineer, before he retired in 1968. The railroad company was a subsidiary of the New York Central Railroad, which took over the line completely in 1952. (Robert Kirkham/Buffalo News)

The work that went into the West Shore opening hardly went in a straight line. It started when Greg Dziomba took the family on a tour to Straub Brewing Company in St. Mary's, Pa., "an old-school, regional brewery that started in 1872" and weathered Prohibition, his son said.

Josh Dziomba fell in love with the storied history of the brewery – which specialized in the German styles his great-grandfather loved – but that first trip may have foreshadowed some of the patience he would need on his brewing quest.

"I was only 20 and couldn't drink anything," he recalled.

Beer, and its roots, have been impossible to shake for the now 32-year-old.

He took Laura, a Clarence native, to the Pearl Street Grill & Brewery on their first date five years ago.

Among the first gifts she gave him: a home brewing kit. The earliest batches included a brown ale, cream ale and stout.

Josh Dziomba graduated a decade ago with a bachelor's in marketing from Gannon University, and has worked in in the sales field since. "For years, I applied for beer sales jobs and couldn't find one," said Josh, who continues to work full time for a coupon advertising company while the family rolls with its brewery dream.

His loved ones are in the same spot. Laura is an insurance company copywriter; her father-in-law has worked almost four decades as an industrial engineer.

The three owners were weeks away from opening on a different Main Street site last year when inspectors told them they would need a $75,000 septic system upgrade. They decided instead to look for a different leased location, and found one on the Picone Construction Co. property in Clarence Hollow. The 2,000-square-foot space, on a sewer line, had to be cleaned and renovated. It took more than six months.

"It's been a long road," Josh Dziomba said. "I asked one of my brewery friends when the fun is. He said, 'It's when you say, 'We're going to start a brewery. Then it's not fun anymore.'"

They praised Clarence officials for helping to walk them through the approval and permitting process. "You need that coddling," Greg Dziomba said, "because there were days when we'd come out of here like 'What are we doing?'"

The bumpy part of the ride, prayerfully, is now behind the family.

Their beers have started to flow. 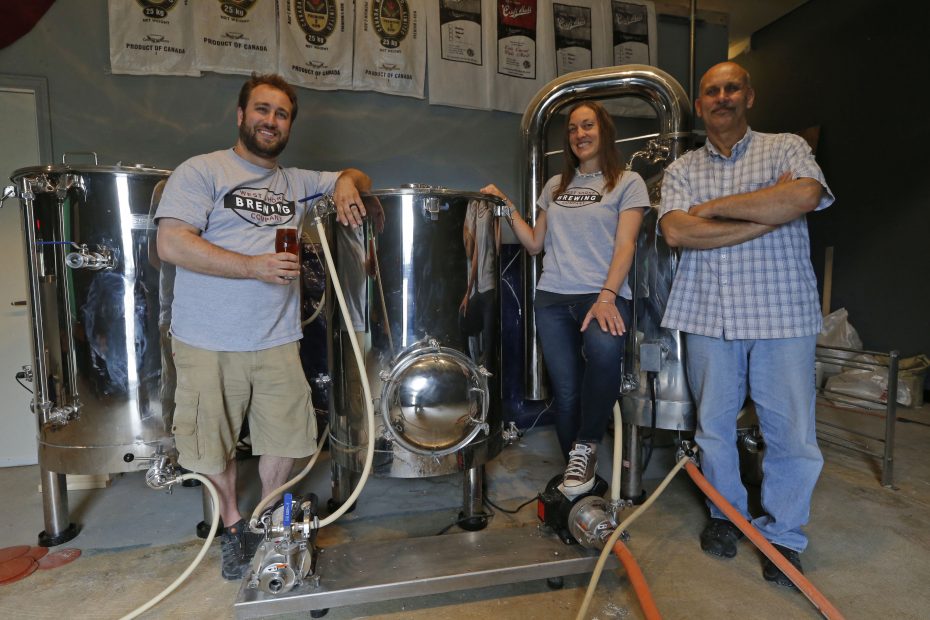 West Shore Brewing is tiny compared to other Western New York breweries that have established themselves during the last half-decade and started to push out some of their beers in kegs and cans to taverns, beverage centers and grocery stores.

It got off the ground last month with a three-barrel brewing system – roughly one-tenth the size of 12 Gates, New York Beer Project and the new RiverWorks breweries. The West Shore system includes three stainless steel tanks in its brewhouse and six 1½-barrel plastic fermenters. Josh Dziomba, the head brewer, hopes to craft 100 barrels of beer – 3,100 gallons – during the first year.

The Dziombas estimate it has cost more than $100,000, and thousands of hours of sweat equity, to open the brewery doors.

They have started with four of their own beers: West Shore Wheat, Not So Bitter Bitters English Ale, Centennial Session IPA and a cream ale. A flagship Historic Rail Pale Ale will be available soon. Josh Dziobma also looks to brew a pre-Prohibition lager and ale, a grapefruit kolsch, and Octoberfest-style Marzen ales in the near future, too.

"I've brewed everything across the whole spectrum and really appreciate every style," he said. "If it was what I liked, we'd have a lot of stouts and kolsches, and a lot of cream ale. But somebody told me a long time ago that if you only brew beer that you like, you won't sell any, so you really have to be a jack-of-all-trades and brew a lot of different styles."

The taproom – which includes a hardwood bar from the former Gail and Ric's tavern in Akron that dates from the 1930s – also in the coming months will offer craft beer drafts from fellow regional brewers and one hard cider.

"We hope to offer crowlers (32-ounce cans) at some point because they're pretty awesome," Josh Dziomba said.

West Shore will offer free snacks. It doesn't have a kitchen but will encourage patrons to order food from nearby restaurants, including Royal Pizza & Italian Bistro. The Dziombas also hope to soon offer some of their beers in one or two nearby restaurants.

If things go well, Josh Dziomba will be able to replace his plastic fermenters with stainless steel ones and, as is the hope with every craft brewer in the Buffalo region, one or more of his brews will become a hit and demand will force the need for a bigger operation. There's room for expansion on site if that happens, the Dziombas said.

There is also talk of special events, food truck visits and live music. Josh Dziomba was once the guitarist and vocalist for Stone Voyage, a classic rock and blues band that played gigs at the Tudor Lounge, Elmwood Place and other establishments.

"We're going to let stuff play out a little bit to get our feet wet and get a feel for how it's going to work," he said.

West Shore brewing – like one of its smaller regional cousins, Rusty Nickel Brewery in West Seneca – was set up as a farm brewery.

This means they have to use at least 20 percent of their ingredients from New York State during the first year – and at least half state ingredients in the years to come. West Shore buys much of its malt from New York Craft Malt near Batavia, and the family has talked with local farmers to supply a growing amount of its hops. It's also limited to offering state beers, ciders and wines.

That's just fine with the Dziomba family, which has begun to settle in nicely to its friendly surroundings in the hollow. The spot sits about a mile from a bowling alley that includes a mural of an old West Shore locomotive emblazoned on an exterior wall. (The site once played home to a West Shore rail car shop.) Also a mile away is the spot where the Clarence West Shore Railroad station once stood at Salt Road and Main Street. Today, the space is paved over, and serves as a parking lot for another transportation hub: the Clarence Bike Path.

Josh Dziomba's great-grandfather would have been proud.

"About the beer," Greg Dziomba said, "and about the railroad theme." 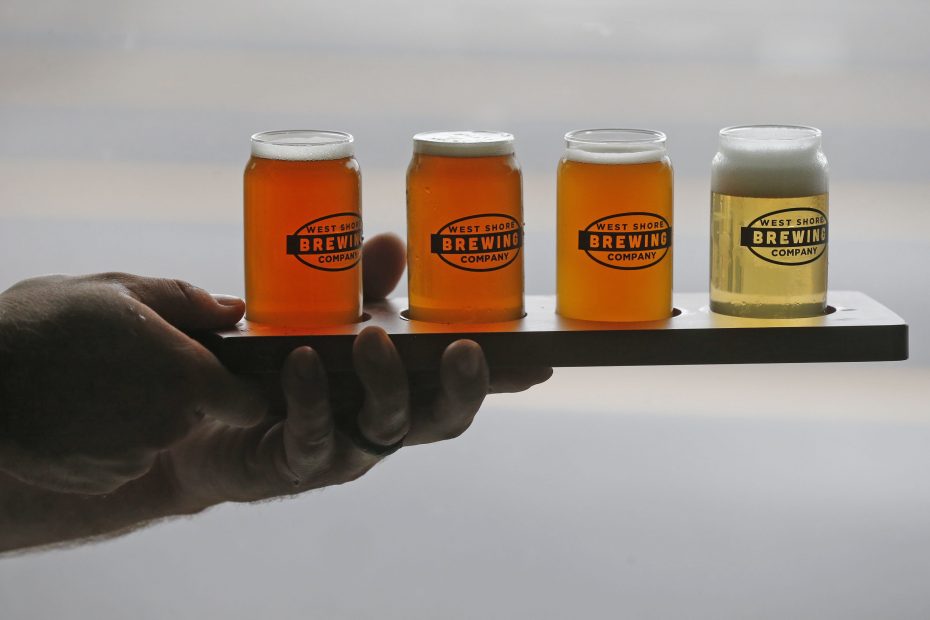 Beers available at West Shore Brewing Company include, from left, West Shore Wheat, Not So Bitter Bitters, Centennial Session IPA, and a yet to be named cream ale. (Robert Kirkham/Buffalo News)

Beers: West Shore Wheat, Not So Bitter Bitters English Ale, Centennial Session IPA, and a cream ale. A flagship Historic Rail Pale Ale will be available soon, as well as a Berliner weisse – a traditional German-style kettle sour beer in which flavor shots of raspberry, mango or grapefruit can be added after the draft pour.

Brewing philosophy: "All my beers are really well balanced. Each beer I go after, I try to do something different. ... but I never want anything to be too far over the top," said Josh Dziomba, co-owner and head brewer.