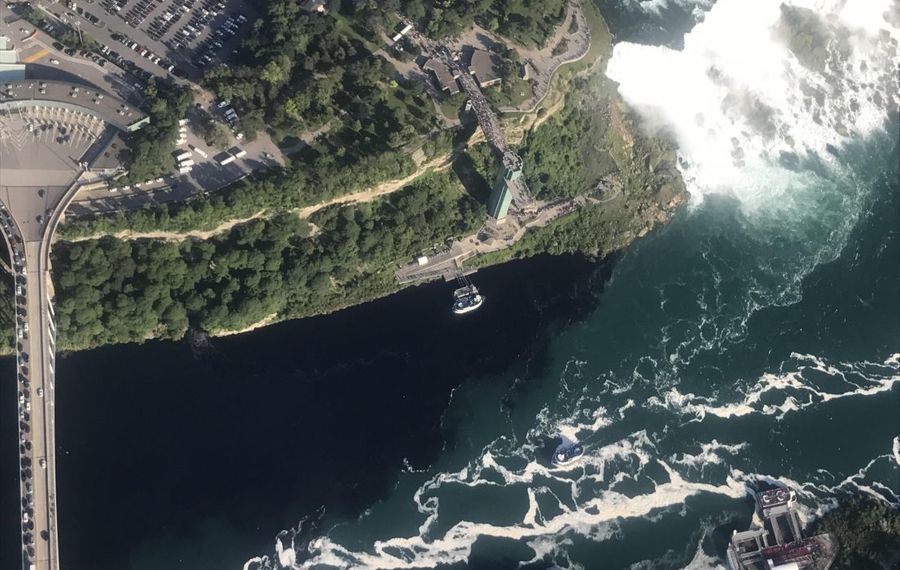 The Niagara Falls treatment plant has permits to discharge wastewater into the Niagara River, but it did not have permission to turn the water black last Saturday afternoon near the base of the American Falls, according to the state Department of Environmental Conservation.

Gov. Andrew M. Cuomo on Tuesday called for the DEC to investigate.

Even if the Niagara Falls Water Board was in compliance with its permits for the volume it released, it still may have committed several other violations, DEC officials, speaking only on background, told The News.

“In this instance, the discharge clearly violated water quality standards which prohibit discharges that adversely affect color, cause odor or cause a substantial visible contrast to natural conditions,” a DEC official said.

The DEC is probing what water quality standards were violated by plant operators that resulted in a foul-smelling black plume being released into the river between the American Falls and the Rainbow Bridge.

“Any violations of the state’s water quality standards are a serious issue,” Cuomo said. “Niagara Falls and the Niagara River are a world-class destination for tourists and we should not be polluting this unparalleled natural resource.”

Niagara Falls Water Board officials said Sunday that the discharge was part of a twice-a-year routine flushing of a sediment basin at its water plant.

Rolfe Porter, the water board’s executive director, explained the activity was not normally performed during the height of the tourist season and that the residue from backwashing its system turned the water black from a process used to take chemicals and smaller particles out of the water.

“It did not exceed our permit,” Porter said.

Porter said the Waste Water Treatment Plant had a DEC permit allowing it to empty and discharge its sedimentation basin.

Though Saturday’s discharge was “longer than usual,” Porter said the action was taken legally, with DEC permission. He also said all the water discharged was monitored.

DEC officials, however, say the incident appears to be anything but routine.

Something likely went awry somewhere along the line that led to the turbid and foul discharge that contained backwash contaminants, solids and fine carbon particles.

The exact components of the release and their quantities remain under investigation. Samples taken by treatment plant operators will be evaluated by the DEC.

Other potential violations being investigated by the DEC’s Bureau of Environmental Crimes include failing to immediately notify the DEC about the incident and reporting it under the state’s Sewage Pollution Right-to-Know Law.

The DEC learned of the incident from fellow state officials in the Department of Parks, Recreation and Historic Preservation, not the water board, officials said.

“DEC’s Division of Water is reviewing both normal plant operations of this basin and operations that led to the water quality violation,” the agency said.

It also said it intends to look into those previous discharges the water board says it's made to find out whether they too violated water quality standards.

City of Niagara Falls officials have expressed frustration after the incident with how it transpired and the lack of communication about when it would be released.

“Different agencies witnessed this yesterday and nobody talked to each other,” City Administrator Nick Melson told the News Sunday.

No one from the water board returned repeated telephone calls and emails from the Buffalo News Tuesday.

The section of the river where the plume was settling out is also the spot where environmental restoration efforts continue for the threatened lake sturgeon, which rely on the river bottom for food and reproduction.

U.S. Fish and Wildlife scientists involved in the efforts to restore the threatened sturgeon say they aren’t immediately concerned, especially if the wastewater plant routinely makes discharges like this, but will keep tabs on developments.

“They don’t show any signs of any higher levels of contaminants we’re testing for,” said Dimitry Gorsky, a fish biologist in the U.S. Fish and Wildlife Service of the sturgeon population in the lower Niagara River. “We don’t have any evidence it would be a problem yet.”

Because of the large volume of water flowing over the nearby falls, DEC officials believe no long-term impacts are expected to habitat or wildlife, including to the sturgeon, from the plume.

“The odors and discoloration were a noticeable public nuisance condition, but it is unlikely that the discharge posed any long-term impacts to human health or the environment,” the DEC said.

Even with those reassurances, local environmental groups said the incident is the latest example of why upgrades to wastewater infrastructure are sorely needed across the Buffalo Niagara region and the Great Lakes.

“Just because this discharge may be an approved practice, does not mean it is what is best for the health of the Niagara River,” said Jill Jedlicka, executive director of Buffalo Niagara Riverkeeper.

“In addition to the altered color and odor impacting the receiving water body, of particular concern to Buffalo Niagara Riverkeeper was the presence of small carbon particles,” Jedlicka said. “Toxic chemicals such as dioxins, metals and benzene can adhere to fine particles, and these chemical compounds are known to be present in past and current industrial discharges to the plant.”

The incident, which generated widespread attention across North America and even as far away as the United Kingdom and Sydney, Australia, casts the region in a dark light globally and shows the world how lacking the region is in sewage infrastructure, according to Brian Smith, the associate executive director of Citizens Campaign for the Environment.

“Our greatest natural resource is the Great Lakes, and our number one tourist attraction is Niagara Falls,” Smith said.

“Regardless of the legality, we should view dumping an inky, foul-smelling substance into our greatest natural resource and top tourist attraction as completely unacceptable.”