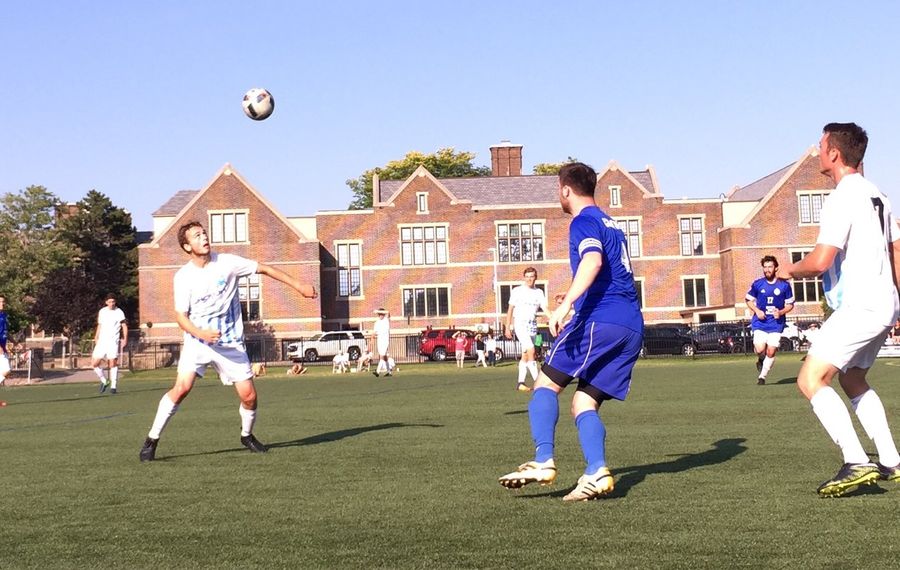 The first round of the Buffalo & District Soccer League playoffs rumbled on Sunday, and while the results weren't too unexpected, the fashion in which they were achieved were rather unexpected.

Let's bound through the four matches - two apiece in the premier and championship divisions.

With Raiders controlling possession out of the gate, East Aurora struck on a counter attack, as Bryce Schiltz connected with Parker Healy, who played Joe Vucic in behind the Raiders defense; EAFC's leading scorer made no mistake in slipping the ball past Raiders goalkeeper Ryan Arvin from close range.

BSC didn't wait long to respond, however, as an accurate long ball from Matt Waddington to Kendell McFayden gave the FC Buffalo striker  an easy lob over East Aurora backstop Steve Pufpaff, who'd began to charge off his line. 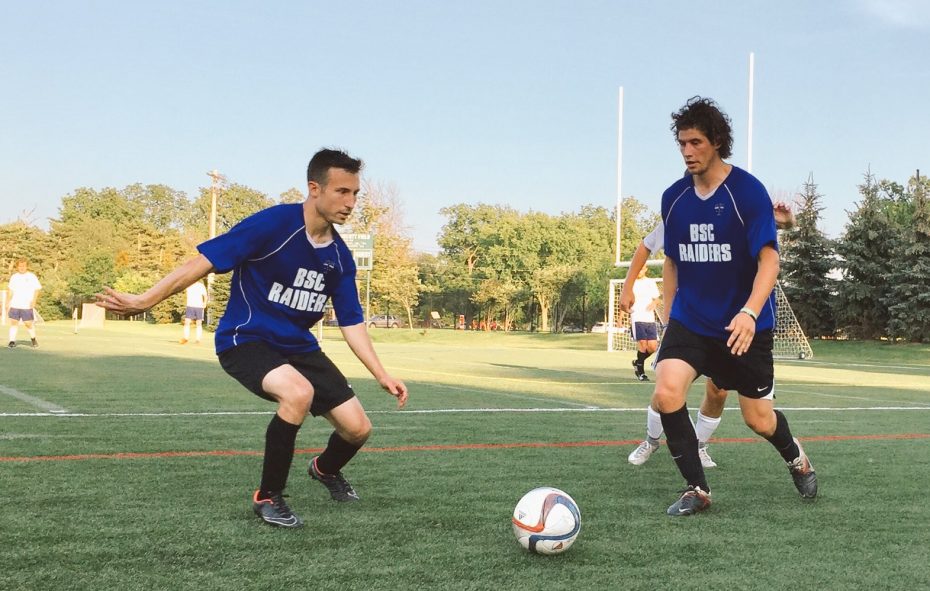 Roughly 15 minutes later, Raiders took the lead for good. Matt Grabowski ran onto a pass on the end line, cutting it back to Pa Lu stationed at the penalty mark. The calm Fredonia-bound forward flicked the ball up to himself and then creamed a volley into the side-netting of the far post. It was nice.

After Lu clanged the post and Ryan Walter sailed over twice from close range, Grabowski put the game out of reach with about eight minutes left, cleaning up the garbage in front of goal and bouncing it past Pufpaff.

Fill-in center backs Ryan Keller and Colin Shoemaker were sturdy in fending off incessant Raider attacks, while East Aurora's best possession came from Bryce Schiltz on the left side. BSC's organization and selflessness in spreading the ball around the midfield left the losing side gassed from chasing, limiting the energy reserved for runs forward.

Raiders' goalkeeper Ryan Arvin was called upon to make one phenomenal stop in the second half, robbing Vucic of a brace by soaring to his left to parry aside the East Aurora striker's back-post header, following a pinpoint serve from Schiltz. 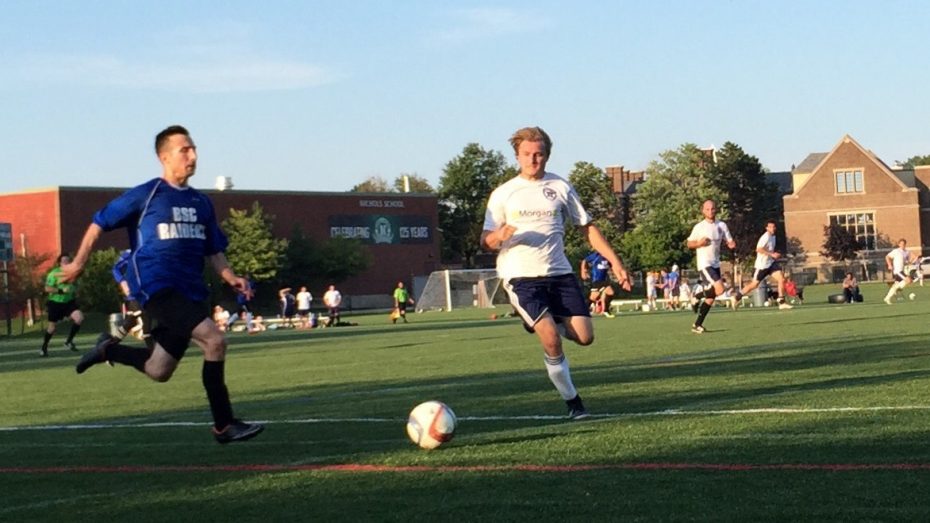 Recap: A gritty 11-man Soho squad pulled off a mild upset at Clarence Town Hall, as Jake Montante's overtime header of a Pablo Ordonez cross proved to be the winner.

Soho's Ryan Mangano and Clarence's Francesco Strangio traded goals in regulation, but the majority of the match was dictated by the Coyotes, who brought superior numbers and benefited from the return to health of Gary Boughton.

The efforts of center back Andrew Larracuente, who deserved man of the match honors, and his fellow defenders Dave Hogan, Nate Griffiths and Kyle Wiatrowski kept the game within reach.

Soho dodged a bullet at the death, as a Clarence free kick forced a top-notch reaction save from Soho goalkeeper Bryan Staniszewski, and the 'Yotes crushed the rebound opportunity over the crossbar.

Recap: The heavily favored Willies didn't take long to establish their dominance, cruising to a 4-0 halftime lead and thoroughly beating a Niagara FC side that found itself reduced to 10 men for 50 minutes after Bobby Stevens earned two yellow cards.

Center back and captain Ian Harris (Mercyhurst) popped in two penalty kicks, while Matt Soos tallied the opener and Justin Bonetto and Yohan Andraud added the other two markers.

Bonetto's technical ability stood out, as he took his left-footed chance with aplomb and generated chances without dominating the ball. It's scary to think he has one year of high school remaining at Williamsville North. 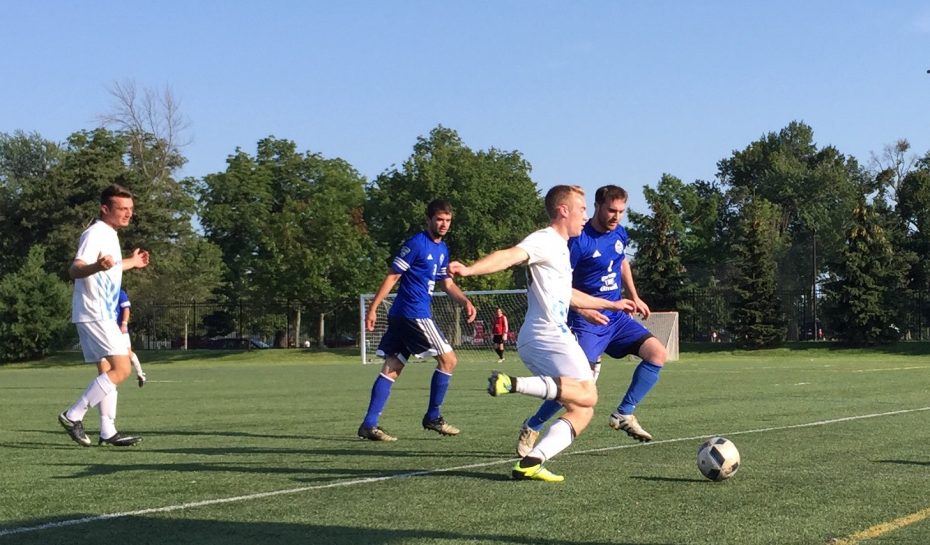 Jeffrey Bellinger, in white, tries to keep the ball in play as he nears the sideline. (Ben Tsujimoto/Buffalo News)

Niagara FC tried to wear Willies down physically, but the No. 6 seed wound up fouling the younger, quicker opponent with too much regularity - especially in dangerous areas. The losing side will be pleased with its late-season push to the playoffs, but they were outclassed on Sunday. 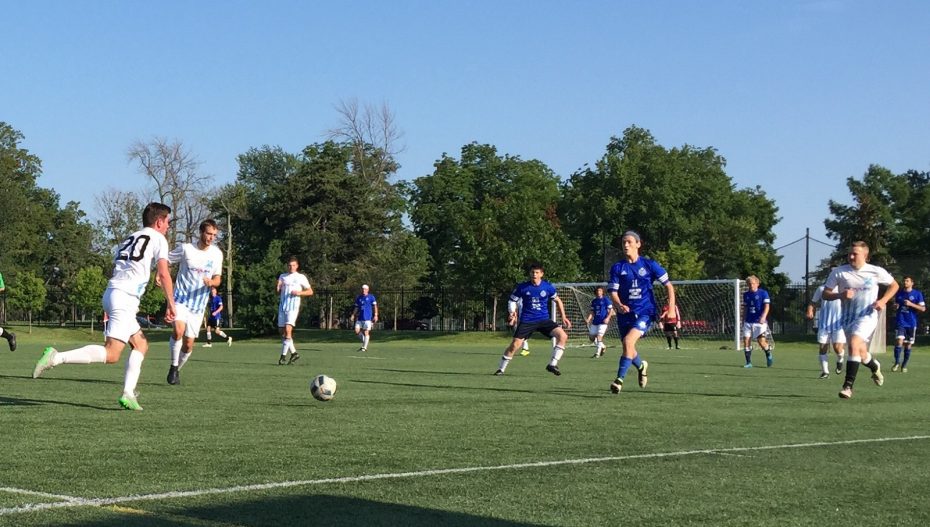 Andrew Looney carries the ball from his fullback position up the field. (Ben Tsujimoto/Buffalo News)

Recap: It was the Noah Keem Show on Sunday night at Sweet Home High School, as the Beast City striker scored a whopping four goals in a comfortable win.

The All-Western New York selection cracked the score sheet inside 10 minutes, as an outlet pass from Scott Pannullo deep in his defensive third sprung Keem at speed against an odd-of-position back line. The striker bolted toward Panthers goalie Matt Smith and finished low into the left corner.

After a Beast defensive breakdown - and a powerful individual effort from Kurt Schulz to round a defender and the goalkeeper - Panthers equalized three minutes later. Veteran midfielder Neil Gladstone supplied the assist, threading a short pass through traffic into Schulz's diagonal run. 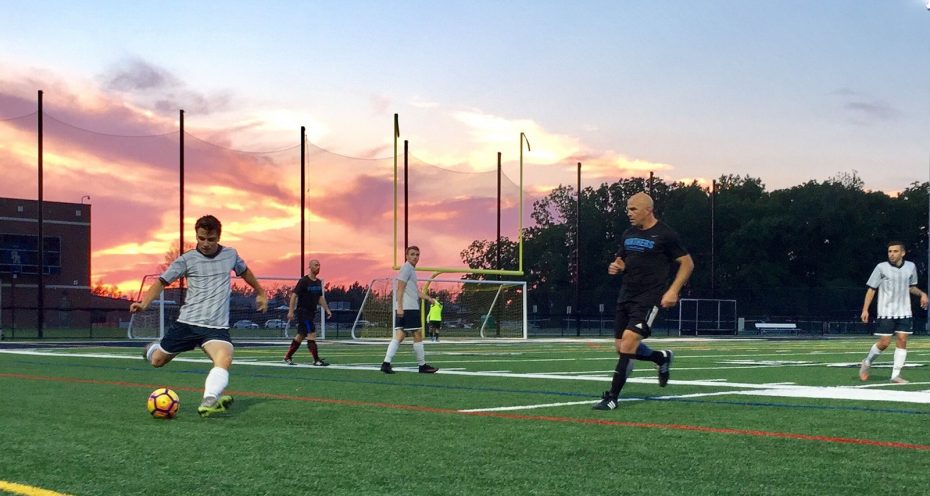 Things turned sour for Panthers when Smith waited too long on his clearance, hitting the ball directly to Keem on the doorstep. The speedy striker patiently dribbled to his right for an angle to shoot, then tucking the ball in the empty net.

The floodgates opened when an Aidan Callahan clearance in Keem's general direction bounced in front of the Panthers' back line. Keem was able to receive cleanly and dribble at the center backs - perhaps out of respect for his pace - so Keem struck a right-footed bender into the left upper 90, an unstoppable shot. 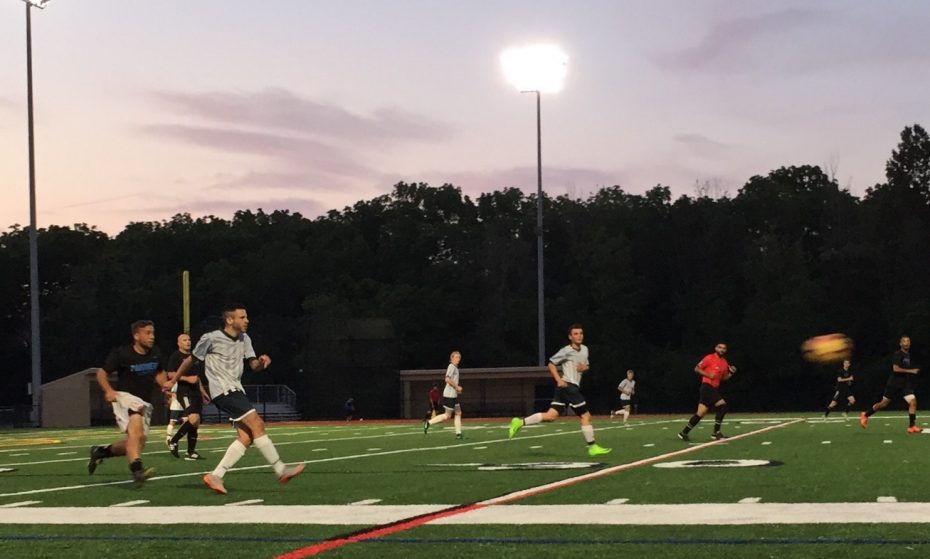 Salt was rubbed into the wound a couple minutes later, when Keem forced a turnover by Panthers' Brad Rodda and laid off to Beast manager Matt Hall, who absorbed a tackle from Eric Clark, took a few more dribbles and then hammered a left-footed shot high into the net from six yards out.

Keem completed his quartet on the other side of halftime, placing a free kick from the top of the box into the right upper-90. Alex Lee Yaw got one back for Panthers on a well-played pass from Matt Cordovani, but the losing side could not muster more despite creating more chances in the second half.

Semifinal match-ups for championship, scheduled for Aug. 6:
No. 1 seed Southtowns FPFC vs. No. 5 seed Beast City SC
No. 2 seed Wolfpack vs. No. 3 seed Williamsville Willies