Fran Barry is the living resolution to a mystery, even if he sees it as no mystery at all.

Barry points out that he hasn't exactly been in hiding. You can find the 80-year-old Buffalo Bisons fan at almost any game at Coca-Cola Field, seated next to his good friend Jim McGowan, in the first row behind the Bisons dugout.

Yet Barry holds the answer to a question Cy Kritzer of The Buffalo Evening News asked 60 summers ago, after Luke Easter hit his second home run that season of more than 500 feet, a blast over the center-field scoreboard at the old Offermann Stadium.

Those feats were like lightning bolts in the civic imagination, the biggest thing at the time in Western New York sports, especially since the 6-foot-4, 240-pound Easter – one of the most beloved players in Bisons history – turned 42 that August.

He was an epic figure. Easter was in his 30s in 1947, when Jackie Robinson broke baseball's color line, meaning fate took away Easter's chance at a long Major League Baseball career. Still, he had time to hit home runs they still talk about in Cleveland, and then he did the same thing in the minor leagues for Buffalo and Rochester.

Sean Kirst: Of baseball's Luke Easter and dreams that have yet to touch the ground

The first scoreboard shot for the Bisons, on Flag Day of 1957, smacked into a house on Woodlawn Avenue. But the second blast never seemed to touch the ground.

"Did Luke Easter hit that ball so hard that it disappeared?" wondered Kritzer, a legendary Buffalo sportswriter.

The ball vanished. No one had any idea of what happened to that home run. The question of where it ended up re-emerged a few weeks ago, as I worked on a column about Easter's lasting impression on Buffalo.

Fran Barry, 60 years later, told me he knows where that baseball is.

He gave it to the late Tim Russert, the fabled newscaster who hosted "Meet the Press," in 2005.

"Tim took the ball, shook my hand and said to his father: 'This is the ball Luke Easter hit over the center-field fence,' " Barry said.

[Sean Kirst: The neighborhood legacy of Luke Easter, in Buffalo]

In email correspondence this month, Luke Russert, Tim's son, recalled the tale. He said the ball remains in a family collection of his father's baseballs – and that it has extraordinary meaning, even next to balls signed by Mickey Mantle and Sandy Koufax. Luke Easter was a hero to both his father and grandfather, Luke said, and the stories about the monster home runs were matters of Russert lore.

"So to receive THE ball that went out of the stadium was deeply meaningful," Luke wrote, speaking of his father's reaction. "It was a literal connection to his childhood sports hero and going to games with his dad."

Still, the ball embarked on a 48-year journey from one point to another.

When Barry was a child, his father, a claims adjuster, used to take him to Bisons games. Later, when Barry grew old enough to go by himself, he and his buddies rode their bicycles to Offermann, a ballpark that was eventually demolished. 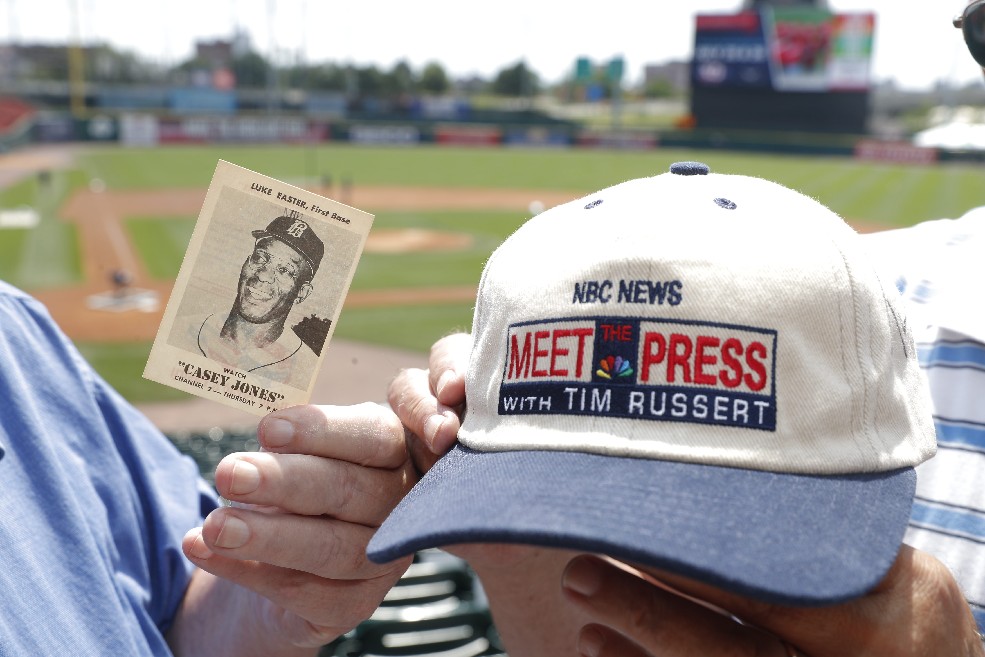 Barry was with his father, in the stands, for Easter's first blast over the scoreboard, a shot that kept rising and rising until impossibly – almost spiritually - it flew over a corner of the scoreboard, and disappeared.

For the second blast, in September, Barry, then 20, was doing what he often did when he went to games with friends: He had paid a quarter for a rooftop seat at the house of a man who lived behind the left-field fence, a guy who made a little money on the side by taking advantage of his view.

Barry said he and a buddy were in a perfect spot when they saw the ball come screaming down, and then watched as it careened behind some houses.

"We scampered to get it, and I went into the yard of the last house on the street, and a man came out and told me to leave," Barry said.

The homeowner meant business, and Barry said he was hurrying back toward Woodlawn when he saw a flash of white in a hedge:

He stooped down, grabbed that treasure and kept going. He brought the ball with him the next time he went to Offermann, and he stood by an East Ferry Street gate until Easter walked out.

"This is the ball you hit over the scoreboard," Barry told him.

"That's not the ball," Easter replied, in one of his classic lines. "That ball's still going."

Then he laughed and signed it – Easter showed no interest in hanging onto such monumental souvenirs – and Barry had a treasure he thought he'd keep for life.

Things change. The years went by and baseball didn't meant the same thing to his family as it meant to him, and he still had the ball – older, yellowing, gathering dust. He felt as if it ought to be in some place of meaning. 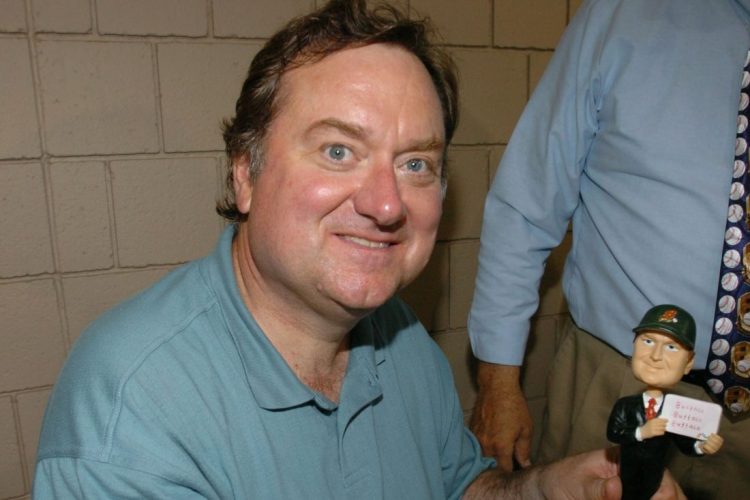 Barry loved "Big Russ and Me," Russert's book about a Buffalo childhood and his father, who brought passion and dedication to a job in city trash collection. Barry remembered how Russert wrote that he named his own boy for three different people, from wildly different walks of life:

[Sean Kirst: How the Boston Red Sox coulda, shoulda been in Buffalo]

Easter, by that time, had been dead for 26 years, shot to death by murderous robbers in Cleveland. But Barry brought the ball to the field for that 2005 game, and he explained his quest to Bisons general manager Michael Buczkowski.

Not long afterward, the public address announcer called for one Francis Barry. He met Buczkowski on the concourse, and they walked to an area where the Russerts – Tim, his dad and Luke – were seated at a picnic table.

"I told Tim I wanted to give the ball to Luke," Barry said. 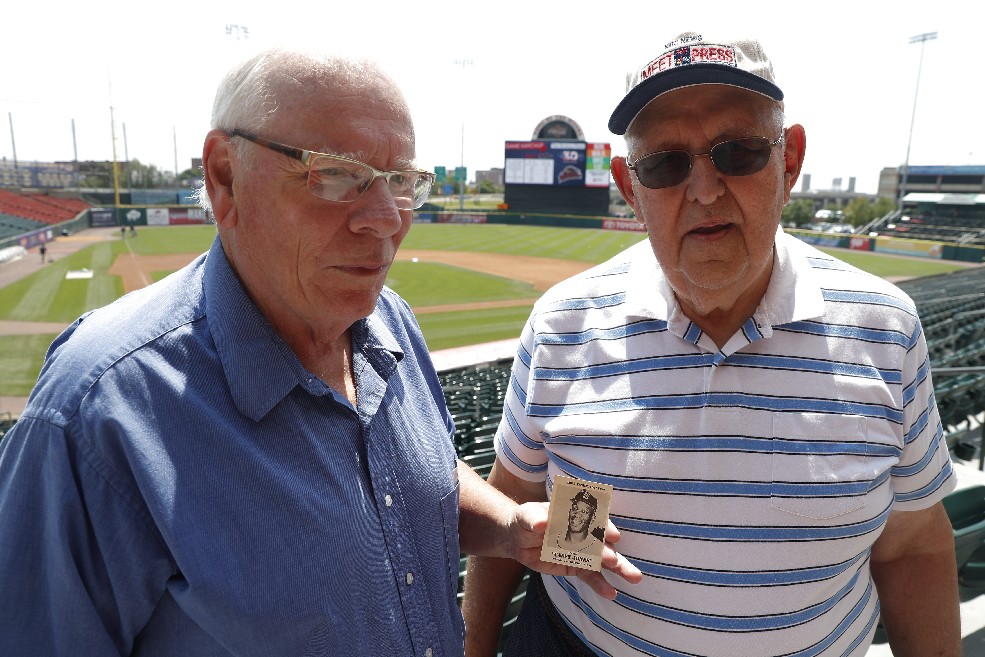 He didn't know anyone else, he explained, who would appreciate it as much.

Russert was clearly moved. He asked Barry to put his name and address on the bottom of the ball. All three Russerts handed it around, with reverence.

"We'll respect this for the rest of our lives," Russert told him.

Two weeks later, a box came in the mail. It contained a thank you note from Russert and an autographed "Meet the Press" baseball cap. Barry wore the cap that day. He put it away for years, and he didn't pull it out again until he felt a need to wear it as a tribute.

As for the ball, Barry has the answer to Cy Kritzer's question. Luke Easter launched an unforgettable tape measure shot, and Barry knows exactly how far it traveled.

If you want the precise distance, put it down as Luke to Luke.

Ahhhhhh, okay this rings a bell. There was a signing of "Big Russ and Me" at a Bisons game in 2005 after Tim Russert Bobblehead day. I have a vague recollection of this moment. It was a special day for our family because my grandpa, dad and I threw out the first pitch.

Being named Luke derives from three inspirations: the apostle, Cool Hand and Easter. My dad being the Irishman that he was would emphasize one depending on who he was talking to at the moment. So to a nun I was named after the apostle, to a culturalist it was "Cool Hand" and to the Buffalonian/sports fan it was Easter. So on the day of the Bisons game I was named after Luke Easter.

My dad and Grandpa were both drawn to Easter because of his previous MLB experience and of course the bombs he sent out of Offermann Stadium. Those long home runs were my father's earliest baseball memories.

So to receive THE ball that went out of the stadium was deeply meaningful; it was a literal connection to his childhood sports hero and going to games with his dad. I think my father's favorite job wasn't "Meet the Press" but being on the board of the baseball Hall of Fame. In this position he had the opportunity to meet all the greats from Yogi to Mays to Koufax. He had autographed balls from all of them and they sat in a place of prominence in his home office right next to that ball that went off the end of Luke Easter's bat; it was probably the most special.