The do-or-die part of the Buffalo & District Soccer League season has finally arrived, as the first round of the men's amateur league playoffs rolls July 30.

Compelling match-ups are littered throughout the league's five divisions, but we'll focus on the top tier - which is perhaps the deepest ever in terms of talent - in this post.

Checking in on Raiders: It's been a rocky season at times for BSC, a perennial favorite in premier. Consecutive losses to BUSS (in league) and Williamsville Willies (in Tehel Cup) forced the team to do some soul searching, and Raiders' odd forfeit at the end of the regular season allowed BUSS to bump them for a bye.

Then again, Rocky Palmeiro's squad proved their mettle with an emphatic 5-2 win over Sharpshooters, the eventual regular-season champs, on July 18 - a reminder of how potent a full-strength BSC side can be. 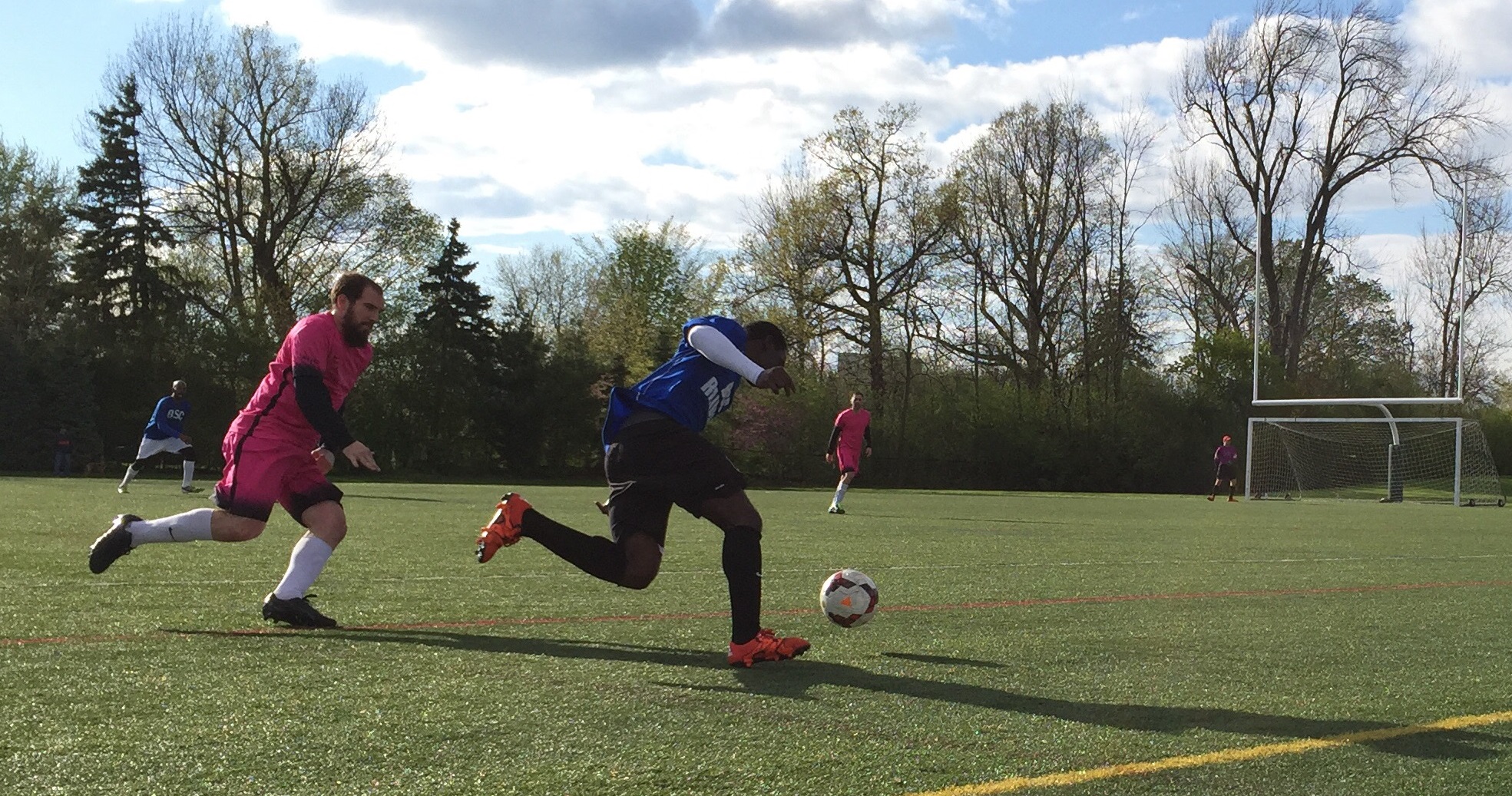 The speed of Raiders' Kwadwo Asante, right, is a problem for opponents. (Ben Tsujimoto/Buffalo News)

While exceptional defender-midfielder Casey Derkacz will miss the quarterfinal clash with East Aurora, Raiders should have better attendance than usual, and it's tough to bet against a team with Kendell McFayden, Chris Walter, Rudy Pikuzinski III and Matt Waddington.

Raiders' balanced scoring is scary for opponents, as eight players have scored two or more goals. With Kwadwo Asante, Pa Lu, Tony Mermigas and Anthony Johnson all as complementary attackers, BSC have an abundance of riches. Goalkeeper Ryan Arvin, formerly of Canisius College, has been an upgrade over previous Raiders backstops.

Unheralded players to appreciate: Matt Grabowski (No. 23), Kyle Rogers (No. 7)

Checking in on EAFC: Taking a step back, East Aurora's climb from second-division squad in 2014 to a playoff team in premier in 2017 is one of the BDSL's most impressive feats. A championship in 2017, as unlikely as it might be, would be an historic achievement.

Despite missing their center-back pairing of Shane Healy and Michael Jackson for much of the season, the blue-and-white have rode the offensive fireworks of Joe Vucic (11 goals) and the ferocity of midfielders Parker Healy and Ryan Keller. Youngster Bryce Schiltz has bolstered East Aurora's wing play since his return from FC Buffalo Academy duty.

Unheralded players to appreciate: Barry Hunt (No. 19), Aaron Kosowski (No. 17)

Checking in on Clarence: Home-field advantage is a massive benefit to the Coyotes for this quarterfinal, as Clarence Town Hall's field can be a brutal pitch for unfamiliar visitors.

Clarence recently welcomed back star midfielder Gary Boughton from a torn meniscus, and the center-back pairing of A.C. LaFlore - who travels from Syracuse for the matches - and Ryan Schroen is a nightmare to break down.

Although finishing has proven elusive for the Yotes at times, forward Chris Berardi and midfielders Boughton, Andrea Conte, J.J. Hughes and Derek Maier can all bag goals. Defender Andrew Peek and striker Sam Sutherland have injected a little youthful energy in a side that needed it. Expect John Siefert's squad to have an edge in continuity and discipline over a combustible opponent.

Checking in on Soho: A three-game suspension to Andy Tiedt for a red card in Tehel Cup hamstrings Soho heading into the playoffs, but the Burgers' league form has been tremendous. Bryan Staniszewski's team swept July, going 4-0 with a goal differential of +15, although a 10-2 beating of shorthanded Yemen Elite inflates the latter number.

Transfer window additions of Prisco Houndanon and Austin Zaepfel have given leading scorer Ryan Mangano (eight goals, six assists) support, while Austin Tom has upped his play in the absence of Tiedt and Steve Butcher, who also is serving a red-card suspension.

The back four of Andrew Larracuente, Dave Hogan, Nate Griffiths and Jake Montante has a nice balance of grit and technical ability, while versatile Josh Hall and Bobby Ross can play a variety of useful roles.

Unheralded players to appreciate: Kyle Wiatrowski (No. 16), Hogan (No. 5)

Bold prediction: 2-1, Clarence. A full-strength Clarence side is a formidable foe, and the Yotes should have an advantage in the midfield. But will they finish their chances?