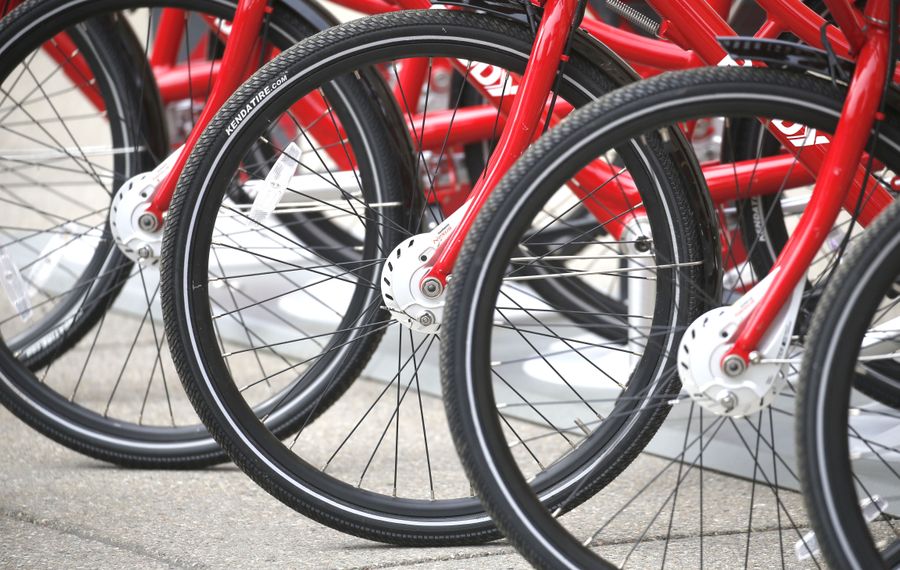 You've probably seen them, those red bikes around Buffalo. They are locked up in neat rows with bright yellow locks.

They are Reddy Bikes, sponsored by Independent Health and ready to roll, thanks to a local system called Reddy Bikeshare.

They called to me.

"But you have a bike!" my friends said. True.

Over the years, though, I've had bikes stolen. I got flat tires. Plus, it's hard to get the bike out of the basement without opening the door to the cat, too. Despite these reasons, I like to bike,  I just didn't.

Hence, the appeal of these Reddy bikes.

I liked how you could borrow one and not have to return it to where you got it. I also liked how flat tires are someone else's problem. 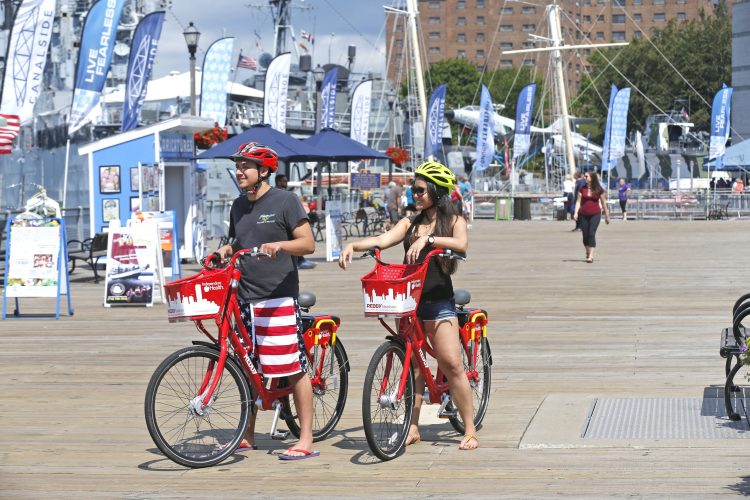 The bikes are heavy-duty and beautifully designed, with three speeds and no chains, and heavy-duty baskets welded in place. They're all "girl" designs, luckily for me because being a tiny bit French, I just can't ride a red bicycle without wearing a skirt.

Maybe most importantly, there are days you feel like leaving the car at home, and I've been looking for options ever since Metro Bus eliminated my stop, ignoring my pleas. I appreciate public transportation, even if it doesn't always appreciate me.

A Reddy Bike membership is $50 for the season, which lasts untill November. There is a 50 percent off discount from now until the end of the year, bringing the price down to $25.

Beyond the membership, every time you use a bike, it's a penny a minute. You can lock up the bike free at a number of hubs around town. Or lock it at any bike rack in the district for $2. It sounded reasonable.

I got online at reddybikeshare.socialbicycles.com and signed up. 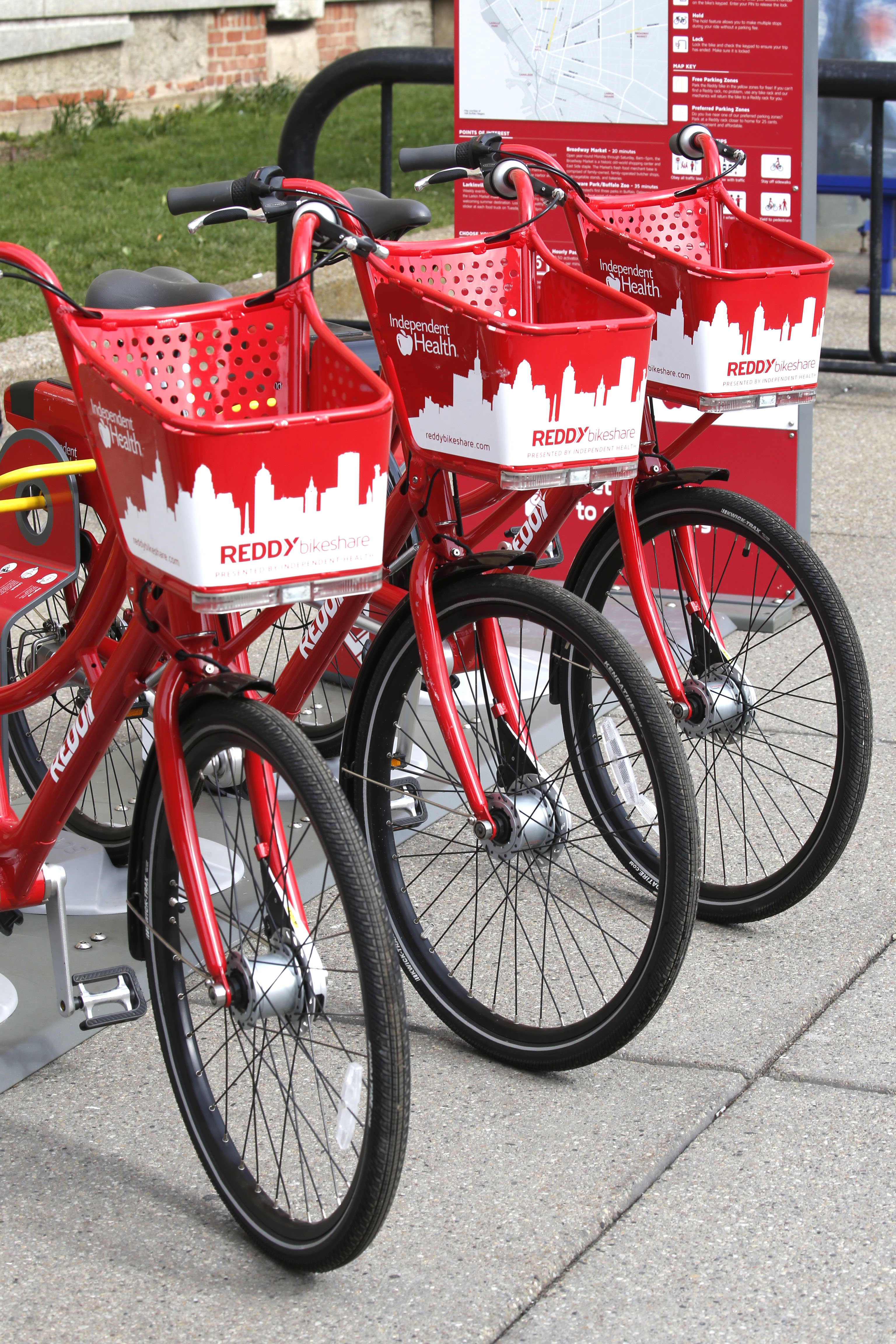 Reddy Bikes include baskets, locks and all you need to pay for rentals in docking stations across the city. You can return them to any station when you're finished. (Robert Kirkham/Buffalo News)

It was easy to get started. One sunny May day, I approached the red bikes locked in a row by Coca-Cola Field. I keyed in my ID number, then my four-digit PIN number. The U-shaped lock slipped right out.

I felt a little self-conscious easing it out onto Washington Street. I didn't realize until then how long it had been since I had ridden a bike.  Gradually I relaxed, though, and headed onto the downtown bike path. I'd been curious for some time about where it went.

It was so much fun that the next day, I got a little bolder. A bit too bold, as it turned out.

Basking in the sun and 85-degree temperature, I  got a Reddy at Canalside, pedaled hither and yon, and found myself at the Outer Harbor. Wildflowers bloomed. Cattails waved. It was full of bike paths, like a bike paradise.

Suddenly, though, I realized I had to get back. Desperate, I flagged down a fellow biker and asked him the fastest way back downtown. He looked me over – sandals, skirt, no helmet, o-kaaayy – and then broke the bad news: I had a long way to go.

An eternity later, sweaty and panting, I locked the bike back up at Canalside. I felt better, though, when I looked at the bike's screen. It read only 59 minutes. Where else could you have an adventure like this in under an hour?

Encouraged, I graduated to commuting on the Reddy Bike. That was a triumph. I passed my Metro Bus, the one I can't ride any more. Who needs you, Metro Bus? I passed my gym. Haha, gym, who needs you either? On the way home, I detoured into Delaware Park and circled Hoyt Lake. What a pretty ride. And the fare was what, 45 cents?

As much as I love riding the Reddy, the bikes can't replace my car anytime soon.

The weather this summer has been iffy, and because the office requires me to schlep a laptop, I can't risk getting caught in the rain. Also, it can be vexing that although you can be pretty sure a bike will be there when you need one, you can't be 100 percent sure.

Furthermore, the city can be dicey for bikers. There are some nice bike lanes – the one along Linwood Avenue is spectacular. Other bike lanes, though, like the one along Delaware Avenue, are more challenging. And all the bike lanes, riskier or safe, disappear once you get downtown.

One more drawback is that the Reddy Bike system, in its quest to be super-simple, is sometimes vague.

Once, I took the North Buffalo bike path to Anderson's Custard. I locked the bike up at the rack there – and came home to find the Reddy system had slapped me with a mysterious $50 fine. Yikes! Later that evening, a Reddy robot emailed me explaining that it was because I locked the bike at a rack outside the district.

"Don't worry," it chirped. "We'll forgive you this time." Thanks, but I could have skipped the aggravation. Just be more clear, you know? 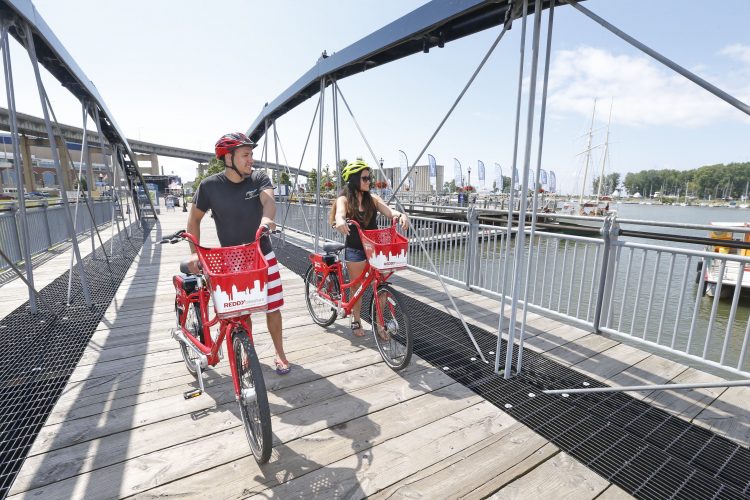 More than 4,000 people have rented a Reddy Bike in Buffalo, including Austin Bobeck and Mabel Integro. (Robert Kirkham/Buffalo News)

The next day, locking up a Reddy in Delaware Park, I met two college students having a terrible time trying to sign up for the system. Nothing worked. I tried in vain to help. Eventually we all gave up.

"I could have lost weight by now!" one of them complained. "Now, I just want to eat."

Well, the system is evolving. In general, I've been very impressed with it.

It has been two months since I signed up. I have acquired the SoBi app. It maps your ride – which would have saved me a lot of trouble on that Outer Harbor trip.

Reddy tells me I've spent 27 hours, 42 minutes on the bikes.

I better get there, before the season is out.

BlueCross BlueShield of WNY Blue Bikes can be found on the Canalside on the Boardwalk, across from Liberty Hound. (John Hickey/Buffalo News)

Blue Bikes, presented by BlueCross BlueShield of Western New York, are also part of the Buffalo bike-rental mix this summer. Here’s how they work:

Location: Blue Bikes can be rented at Canalside on the Boardwalk, across from Liberty Hound.

Availability: Adult, child and full-sized trikes, along with helmets and bike locks, are available 10:00 a.m. to 8 p.m. daily through the end of August. The program is open to all ages, but anyone 15 and under must wear a bike helmet.

Cost: $10 for one hour, $5 for each additional hour or $25 for the day. BlueCross BlueShield of WNY members will receive $5 off any rental when presenting their member ID.