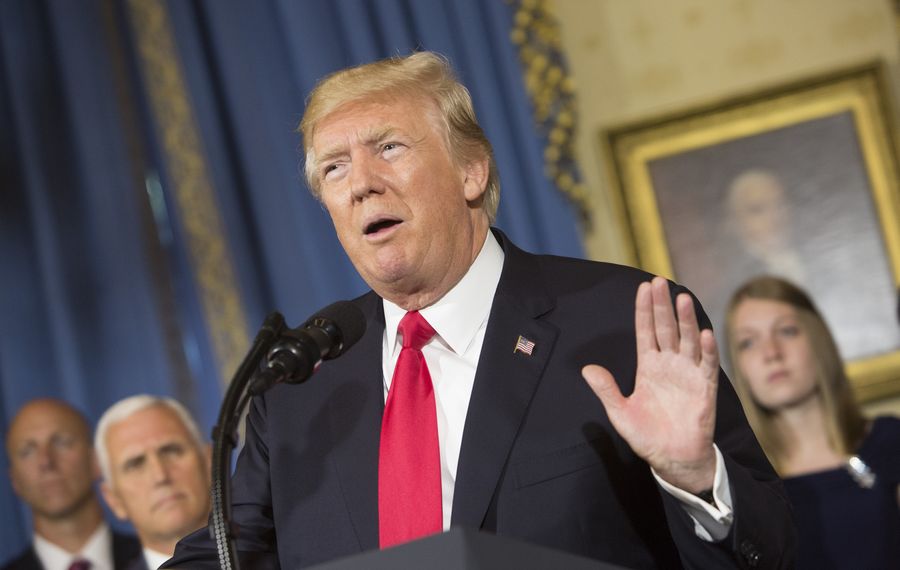 WASHINGTON – Republicans couldn't decide which treatment to force-feed upon the sick patient called Obamacare, so now the top Republican – President Donald Trump – wants the patient to starve to death.

"As I said from the beginning, let Obamacare implode, then deal. Watch!" Trump tweeted early Friday, after the Senate failed to pass its "skinny" Obamacare repeal bill.

They see the end of the GOP effort to repeal and replace Obamacare as an opportunity for Congress to come together on more modest ways to improve health care in America.

Separately, Schumer and Reed – the Senate's most powerful Democrat and the Republican chairman of a new, middle-of-the-road "Problem Solvers Caucus"– Friday offered similar proposals to fix some of what many health care experts said are the Affordable Care Act's most pressing problems.

The great congressional battle over health care is by no means over. And the next battle – which will be mostly about stabilizing the struggling market for individual insurance policies – won't necessarily be fought along partisan lines. Instead, it may well pit the president and his closest allies against more moderate Republicans like Reed and Democratic dealmakers like Schumer.

The battle will be about what, if anything, to do to fix the struggling market for individual health plans.

New Yorkers buy individual health plans through an online insurance marketplace set up by the state, which has continued to offer a variety of plans -- although insurers such as BlueCross BlueShield of Western New York are seeking steep rate hikes in their individual plans to cover increasing costs.

Other states have faced far worse problems. Some rural areas have been left with only one or even no individual-plan options, which is why some in Congress have discussed ways of encouraging insurers to enter those markets.

Trump and his allies, such as Rep. Chris Collins, have been reluctant to prop up those insurers.

“The president is right, Obamacare will implode on its own," said Collins, a Republican from Clarence. "This law has been a complete failure and Democrats are to blame for its collapse.”

In opposing any effort to fix the Obamacare exchanges, Trump and Collins may have a powerful ally in Senate Majority Leader Mitch McConnell of Kentucky.

"For myself I can say — and I bet I’m pretty safe in saying for most on this side of the aisle — that bailing out insurance companies with no thought of any kind of reform is not something I want to be part of," McConnell said.

Yet Republican sources said there is a surprising amount of interest in Capitol Hill in fixing the federal health insurance exchange, which offers health plans in states that did not set up their own online marketplace for individual policies.

No one is more interested than Sen. Lamar Alexander, Republican of Tennessee. Chairman of the Senate Health, Education, Labor and Pensions Committee, Alexander said he is deeply concerned that the market for individual policies is collapsing in his home state.

"Unless Congress acts, many of the 350,000 Tennesseans who buy health insurance in that market — songwriters, farmers, the self-employed — face the real prospect of having zero options to buy insurance in 2018 and 2019," Alexander said.

Alexander has a close friend in the Senate with whom he might be able to deal on the issue: Schumer, New York's senior senator.

"On healthcare, I hope we can work together to make the system better in a bipartisan way," Schumer said. "And I’m optimistic that that can happen."

One way to do that, Schumer said, would be to make permanent the "cost sharing reductions" that subsidize plans sold on the health exchanges.

Executives at BlueCross BlueShield of Western New York and Independent Health both said that permanently funding those cost-sharing reductions would be one of the best improvements that could be made in the Affordable Care Act, the 2010 law otherwise known as Obamacare.

If Trump were to stop those payments, it would leave people on New York's Essential Plan – for people who earn a bit too much to qualify for Medicaid – in danger of losing their insurance. About 19,000 people in Metro Buffalo are currently on that plan.

An end to those subsidies would mean dramatically higher rates for the nearly 11,000 Buffalo-area residents who buy insurance on the state's health exchange.

Reed, the Republican co-chair of the bipartisan Problem Solvers Caucus, said the group will soon unveil a proposal that includes a plan for a permanent fix for those insurance market subsidies. The centrist group of about 40 lawmakers will propose a $75 billion to $115 billion stabilization fund, from which states can draw money for other efforts to prop up their individual insurance markets.

Increasing numbers of lawmakers from both parties recognize that something must be done, Reed said.

"I just do not think doing nothing is sustainable," he said. "You've got millions of Americans that, through no fault of their own, are suffering as a result of the collapse of those markets. To just turn your back on them is, one, not the right thing to do. And second, politically, I don't know how that's sustainable, either."

The Problem Solvers Caucus plan faces some obstacles. For one thing, the Republican leadership in Congress has been focused entirely on much larger-scale legislation that would cut Medicaid and repeal the Obamacare mandates that people buy health insurance and that most companies offer it to their employers.

Asked if his group of moderates had discussed the proposal with House leadership, Reed said they had.

"They're aware of what were doing but obviously they were focused on another approach," Reed said. "Hopefully this will give them a tool to at least maybe address some of the immediate concerns that we all share across the aisle, across the Congress and across the country."

Many Democrats are likely to oppose another one of the bipartisan group's proposals: a dramatic reform to the mandate that even small companies offer insurance. Under Obamacare, companies with 50 or more employees would have to offer their employees health insurance.

Under the proposal Reed is championing, that threshold would be raised tenfold – to 500 employees.

Schumer said there is plenty of room for bipartisan agreement.

"We can work together," he said. "And I said that on the floor last night and a whole number of Republicans who are usually more quiet, more conservative came over to me and thanked me and said they wanted to do it."

Congress has other health-care related issues to contend with in coming months.

The future of the Medicare Disproportionate Share Hospitals program, which provides extra federal funding to hospitals that have large numbers of indigent patients, is particularly important to New York State. Unless Congress acts, hospitals in the state could lose $5.2 billion in funding over the next 10 years, said Susan Van Meter, senior vice president of federal relations at the Healthcare Association of New York State.

"It would be a significant reduction to New York State," Van Meter said.

There's also the issue of the federal Children's Health Plan, which is set to run out of federal funding later this year. Reed said he expects funding for that program to be renewed in some form this fall. "It's a must-pass piece of legislation," he said.

As Congress contemplates those matters, Collins said he and Rep. John Faso, a Republican from Kinderhook, will be looking to revive their amendment that would bar the state from charging its upstate and Long Island counties for a share of Medicaid costs.

Rep. Brian Higgins said Congress should come together on a set of modest health reforms and ignore the president's call to starve the system.

Higgins, a Buffalo Democrat, said on that topic: "It's just a continuation of the highly inappropriate behavior of the president of the United States and the leader of the free world. It's infantile and destructive."