Visitors to Garden Walk Buffalo are likely familiar with the spectacular garden of Arlan Peters and Dom DeFillippo. It’s been on every walk except the first one in 1995, and it’s open to visitors again July 29 and 30 during this year's Garden Walk.

From the handcrafted gate and charming shed to the salvaged fountains and moss garden dotted with a miniature village, it’s peaceful, not exceptionally large but very impressive. So impressive, many visitors to the garden surely wonder this: With a garden this good, what must the inside of this Victorian look like?

So The Buffalo News called up and arranged a visit.

This is what happens when one visits this beautifully restored home on Norwood Avenue, which was built in 1890: Just as one becomes intrigued by the richly hued embossed wallcovering in the vestibule, the eye travels beyond to the coffered ceiling and stunning staircase in the foyer.

The Buffalo home of Arlan Peters and Dom DeFillippo is stunning outside and inside.

Then one hears that the doors between the living and dining rooms – and other architectural elements – were purchased by a former owner from the last of the homes on the John Albright estate on West Ferry before it was demolished in the 1960s.

Once inside the updated kitchen, attention turns to the view of the garden outside the back door – and, well, one can’t wait to step outside to see it.

One also learns that this lovely home was not this lovely when purchased in May 1971 at a foreclosure auction at Erie County Hall. Left vacant – and unheated – for two years, the house required plumbing repairs, repairing or replacement of walls and woodwork, and much more. The unfinished projects were many. By Christmas that year, with essential repairs complete, Peters and DeFillippo were able to move in – and continue the restoration.

“In the years after, with the exception of small areas of the basement and third floor, every square inch of the house, outside and in, has been given attention, and has been stripped, dismantled, rebuilt, repaired, painted, repainted, varnished, papered or unpapered at least once,” explained Peters in a history of the house he wrote several years back.

In addition, the roof, furnace and storm windows were replaced. Two chimneys repaired and repointed. And the front porch professionally reconstructed. 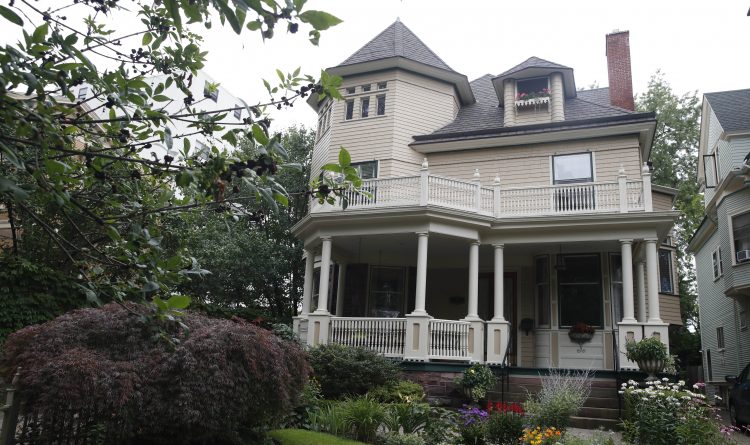 The front porch was reconstructed in 1993. (Sharon Cantillon/Buffalo News)

A former owner, apparently interested in converting the Victorian into a French chateau, had removed the front porch – but never completed the transformation.

“It was just the concrete pad that they had left. Fortunately they left the stone foundation but they filled it with crushed stone and poured concrete over it. So we had all that removed. We had a photo of the house in 1901 that we used to reconstruct it as closely as we could,” said Peters, a retired English teacher from Riverside High School and former co-chairman of Garden Walk Buffalo.

That was in 1993. Other projects – replacing tiles, updating kitchen and baths, restoring staircase – were tackled by Peters and DeFillippo, who said they find great satisfaction doing it themselves.

As Peters put it: “You don’t own an old house; you are its caretaker. That’s a whole different thing.”

DeFillippo, who has a background in furniture restoration, and Peters also share their time and skills with others. They volunteer at Shea’s Performing Arts Center and the Darwin D. Martin House complex.

Doris Collins, restoration consultant at Shea’s, has known the two for years and, after collaborating with them, painted the ceiling of one of the rooms in their home with clouds.

“You go back in time in that house, but with a very refreshing and modern atmosphere at the same time,” she said. “Normally when you think of a house from the 1890s you think dark, less colorful and kind of drab – with none of the amenities of a modern house. They have all of the amenities but it all still fits the era of the house.”

Among the highlights in the home:

• The front staircase is beautiful. The stained-glass windows on the landing are original but one needed to be professionally restored. Peters built the window seat. It looks as if it has always been there, and a grandmother clock he also built adds a grand touch. 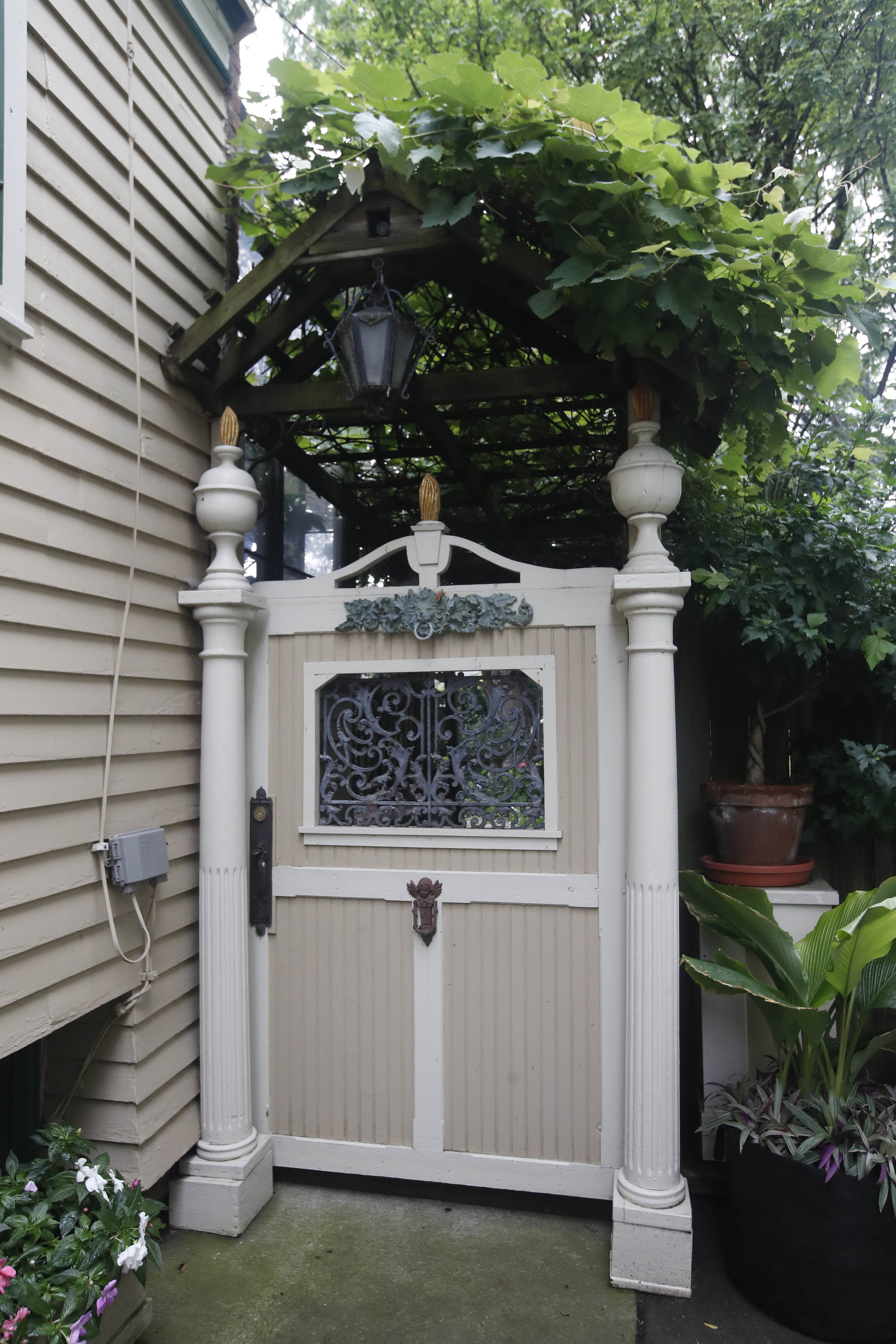 The entrance to the back garden. (Sharon Cantillon/Buffalo News)

• Visitors to Garden Walk Buffalo enter through a side gate and walk under a pergola. The entrance was created from pillars found at Gothic City Architectural Antiques and a gate handcrafted by Peters. A sign reads: “Here I Find Peace.”

• Hardscaped areas in the garden were created from marble and sandstone that had been left behind and was piled up in the yard.

• The area out the back door functions as a terrace in the summer and a greenhouse in the winter. Acrylic roof panels on hinges fold down to form the greenhouse and up to form the roof. Quarry tiles were used for the floor.

• Steps lead down to the garden. Visitors take great delight in seeing the strawberry plants growing through the open spaces at the back of each step.

“We never planted them,” DeFillippo said. “They just crept up themselves.”

Layout: Front porch leads to vestibule. Foyer with sitting area features a fireplace, cushioned bench and inglenook with leaded-glass window and window seat. First floor also has a living room that opens to dining room; small extra room that can function as a library; half bath; kitchen with studio area, and front and back staircases.

Second floor has two full baths and three bedrooms plus a fourth used as an office. There’s also a full basement and a third-floor attic with exercise room.

Highlights: Coffered ceiling in foyer; original stained-glass windows; extensive collection of framed artwork; 8-foot-long replica of the house and garden built by Peters; hidden bar under the dining counter that can be swung open for parties; original cornice in small downstairs room painted by DeFillippo below a ceiling of blue sky and clouds painted by Doris Collins, the restoration consultant at Shea’s Performing Arts Center.

And, of course, the garden.

January Home of the Month: Vacation getaway in Ellicottville