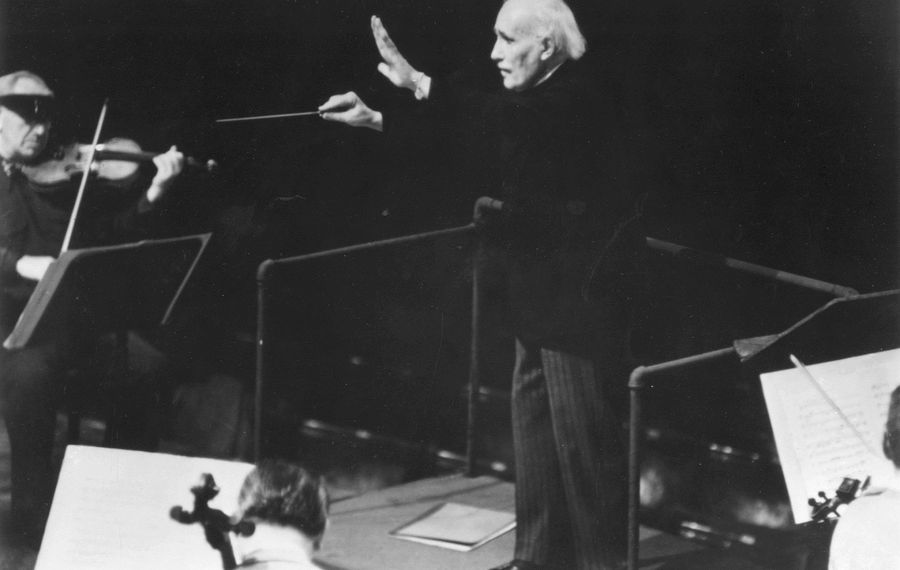 Arturo Toscanini (b.1867- d.1957) was once one of the most famous people in the world, a household name in this country. But even at my relatively advanced age, I have only vague impressions of the conductor, these memories coming from a few recordings (sonically primitive by today’s standards), and images of a dapper, mustachioed gentleman, with piercing eyes that radiated intensity. He was slight of stature but a giant of opera and the classical music milieu in the latter part of the 19th and first half of the 20th century. He had a reputation for a volcanic temper and uncompromising musical standards, a demi-god who struck fear and awe into orchestras and audiences alike. But, as critic Robert Gottlieb has pointed out, great interpreters of music never have the staying power of the great creators of music, and the value of Sachs’ chronicle is as much in social and political history as in the musical and personal story of a fascinating man.

Harvey Sachs is well known in musical literary circles, having written a previous biography of Toscanini (1978) as well as examinations of music in Italy during the Fascist period, a biography of pianist Artur Rubinstein, and a co-author of memoirs by tenor Placido Domingo and conductor Georg Solti. The new availability of an archive of letters and access to relatives’ and associates’ recollections gave Sachs the motivation to expand his original work, more than doubling its length and giving us the definitive biography.

The biographer’s writing style is balanced and elegant, sustaining as much interest as possible in long passages of the purely factual - the obligatory lists of repertoire and comprehensive, detailed descriptions of the seasons at Milan’s La Scala and New York’s Metropolitan Opera - and later the New York Philharmonic and NBC Symphony - the myriad productions of operas and concerts in virtually every year of Toscanini’s life. Sachs does this by carefully salting the narrative with larger contexts and the more juicy social relationships: the feuds with administrators, musical struggles with divas and recalcitrant musicians, contemporaneous gossip, political courage in the face of Fascism, and sexual liaisons in an environment (the theater) rife with temptation and opportunity. A serial philanderer, the maestro was nearly as notorious in the bed as on the podium, behavior that today would probably constitute managerial misconduct. Letters he wrote to his mistresses are sampled in almost voyeuristic fashion, in erotic language that was never meant for prying eyes. But the strayings of the bad boy rock star of his age were considered fair game even then, with rumors and scandals spicing a life in the public domain:

The soprano, Rosina Storchio, who was having a long-running affair with the (married) conductor, was playing the role of Madama Butterfly in the opera’s premiere. Sachs relates that “there is no known comment by Toscanini on one of the evening’s incidents: At some point, a draft from backstage had made Storchio’s dress billow out, and someone in the audience shouted, ‘Butterfly is pregnant with Toscanini’s child!’ ”

Oh, those rowdy La Scala audiences! Notorious even today for vociferous reactions pro or con (Renee Fleming nearly quit singing when she was roundly booed there early on). In those days the Milanese’ reactions could even turn violent, interrupting performances with vocal protests, items thrown onstage and different factions of the audience screaming at each other. The fact that Toscanini had stirred the pot with serious reforms of the company and some of its hide-bound traditions (for instance, he forbade encores which interrupted the dramatic flow, even if the audience clamored for them), made for a volatile mix.

Rehearsals could be even more tempestuous, as the maestro did not suffer fools or incompetents lightly.

Sachs relates many incidents, such as Toscanini sarcastically blowing kisses to an errant trumpeter in the orchestra, his advice to a bass player to “burn that box” and screaming tirades and thrown batons directed at singers and instrumentalists who displeased him. There were occasional push-backs and even some revolts, but he was generally held in such artistic esteem by his musicians (who considered him strict but fair) that he enjoyed broad latitude. Off the podium, he was invariably kind and generous to his colleagues and modest in personality. But, needless to say, he would not get away with such antics in the unionized world of today’s ensembles.

Toscanini could back up his demands -- with an incredible work ethic, stamina to match, a photographic memory and detailed knowledge of every musical score in a vast repertoire, together with the reputation for complete devotion to the wishes of the composer.  He was held in high esteem by contemporary composers, had strong friendships with many of the lights of the period (Puccini, Verdi) and professional ties to many others (Debussy, Richard Strauss). Critical reactions to his performances could be delirious, as in this 1908 review in the New York Times of his North American debut of Verdi’s “Aida” at the Metropolitan Opera:

[Toscanini is] “a strenuous force, a dominating power, a man of potent authority, a musician of infinite resource. He had the performance at every point firmly and directly under his hand. If it were a criterion of his musicianship, he is a man that insists on clear-cut outline, on abundant detail, on the strongest contrasts, on vivid color. […] the fine modeling of phrase, the symmetry of the musical outline in many places where mere brute force was not in question. And the pulsing dramatic blood he sent coursing through [the] score was never allowed to stagnate.”

We can hardly imagine such effusive descriptions in modern criticism, where measured evaluation and more moderate admiration rule the waves. Such adoration would today be counted amateurish or at least, naive. And audiences today are invariably more polite, tolerating a mediocre performance even as they cheer an outstanding one. Toscanini’s era was a more overtly passionate one. Like the conductor himself, Italian tradition and perhaps the cultural psyche in general, unbridled emotion was more rule than exception. But in those times the opera and symphonic music were entertainment; today it is “culture.”

So Sachs describes the legend, and many other musical stars of his era, in amazing detail and with insightful commentary.  He brings the cultural, social and political scene into focus, and makes a case for genius being an ethical and moral force as much as a function of talent and intellect. This, by implication, begs certain questions: Have we advanced, or is it same stuff, different day? Have the effects of an exponential increase in knowledge and the gene pool made for evolution in performers and the arts as well? After all, records are constantly broken in sports - the 4-minute mile, long ago eclipsed and commonplace today.

And some of today’s performers - even conservatory students, have technique and musicianship that might rival the stars of previous centuries. Does it follow that the virtuosity of a Liszt or Paganini would today be ordinary, that the technique, insight and intensity of a Toscanini would be de rigeur for a conductor in the twenty-first century? Or were they all “outliers” in a flat continuum of time and humanity? Either way, Toscanini and those few of his brilliant ilk gave a revelatory bump to the spectrum of what is possible. And Sachs’ book, a classic in itself, has given us that invaluable story.