"It's a lot more than that," said Davis.

The city will cut the ribbon on Aug. 5 on the rest stop and plaza it spent $1.14 million to build, designed to resemble a turn-of-the-century carriage house with concrete sidewalks that resemble a bicycle wheel with spokes from above. Part of the expense was repairing leaky water lines and heaving and buckling pavement at the site off Young Street.

"People have to look at the bigger picture and see how it ties into the waterfront revitalization and Main Street programs, the bike and hike ferry we are restarting, the Rails to Trails which we are starting a second leg (which will connect the City of Tonawanda to the Town of Tonawanda trail) next spring. It all really is about getting more people downtown," Davis said.

Construction of the facility is still ongoing. The official unveiling will be during a new event, called Downtown Days, touted as a "celebration of recreation and family fun activities."

But bikers and hikers are already stopping by the site, located on a 4.5-acre lot between the Tonawanda Towers apartment building and Walgreens drugstore.

Randall Snyder, of Amherst, who rode his bike from Amherst to the City of Tonawanda, called the site a nice stopping point in a ride along the water.

"It would be nice to have a place to stop and get a drink of water and use the restrooms. You hate to go into restaurants," said Snyder. "If you get on the bike path and head towards Amherst there's nothing between here and Ellicott Creek Park. That's a long stretch." 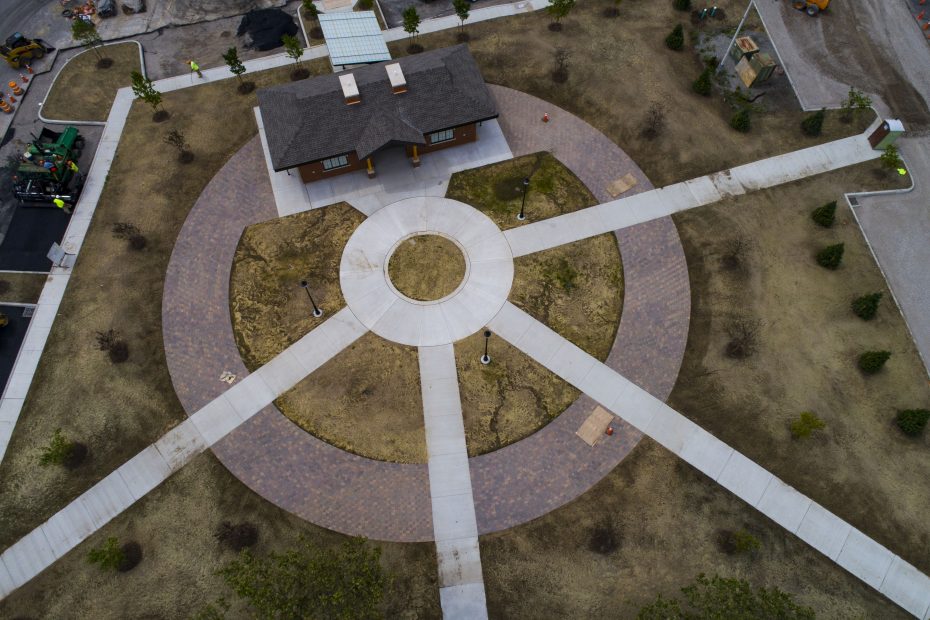 Jim Shilton, the owner of Water Bike Adventures, said he opened his business at 11 Young St. along the canal 17 years ago and he has seen the area improve each year. "I thought this was going to be a hot spot some day," he said.

The hub "will be a nice place to leave your car and get your bike out. I'm so excited. It's so beautiful — the landscaping and everything," Shilton said.

On Aug. 6, a ferry will soon begin operating on Sundays between Grand Island and a dock across the street from the intermodal hub in the City of Tonawanda. City officials hope it brings bicyclists, hikers and shoppers to the city's downtown.

"We are hoping to get a large draw into the area and add to it next year with an artisan/farmers market on the weekends during the nicer months," said Davis.

Chris Lennox and Gary Dunsey, boaters from Niagara Falls, Ont., who had tied up in nearby Gateway Harbor, said they would bring their wives to enjoy live music and a farmers market there. Both said they would like to see more activity at the waterfront.

Downtown Days, on Young and Main streets, will start at 11 a.m. Aug. 5 with a ribbon-cutting ceremony in front of the hub and continue with a yoga class at 11:30 a.m., kids games, a bike rodeo sponsored by the City of Tonawanda Police and a historical walk at Gateway Harbor. Face painting, free popcorn, a raffle, bike repair and rentals, football and soccer clinics and hot dog sales will continue through 2 p.m.

A first-time outdoor boxing event, Rumble on the Canal Boxing Show, sponsored by Goomba's Boxing Club will be held on Young Street from 5 to 8 p.m. Tickets are $10 in advance or $25 for VIP tickets for the 16-bout boxing event and can be purchased at the club, 60 Main St., or by calling 507-7542. Tickets are $15 at the door.

Davis said the next step in the evolution of the city's downtown will be for the Common Council to consider closing a strip of Young Street near the intermodal hub.

He said planners have suggested a plan to permanently close a portion of Young Street, between Delaware and Main streets, in order to drive traffic into the city's central business district.

"If Young Street were closed we could set up little shops in the area for people to sell things in the nicer months, which would really draw in people," said Davis.

He said the design has yet to be determined, or approved, but closing the street is one of the ideas they have been looking at, as part of the Waterfront Revitalization Plan, which would allow the city to transform the area into a park. He said more public input on these designs about how the area may look would be part of the process.

"I don't think Main Street has looked this well in many, many years," said Davis. "You don't realize until you are down there the amount of hikers, skaters and bikers that are down there."