If you want the secret, maybe it was the shoes. Officer Patrick McDonald does not wear your grandfather's thick-soled leather police shoes. He wears jet black, uniform-matching, department-approved black Under Armour sneakers, which allow him to be nimble in any number of split-second on-the-job situations.

Let's say, for instance, he was playing wide receiver in a game of street football in Buffalo, and he was being covered by a fleet 14-year-old named Nicholas Washington, a young man who undoubtedly shared the impression of his teammate of the moment, Antoine Harris, 13.

Harris figured McDonald couldn't run too fast, "not with all that stuff."

So McDonald threw a little move and then went hard down Shirley Avenue, near Suffolk Street. Woolford tossed a beautiful pass that McDonald pulled in as he ran straight into a city sunset – that's no kidding – and all the kids watching from the sidewalk whooped and hollered.

What they didn't realize was that Tasha Fields, Woolford's sister, was catching it on her phone. She posted the video of the football-playing officer on Facebook. Before long, it had more than 1,300 shares. Just like that, a Buffalo police officer's spontaneous decision was being hailed by Mayor Byron Brown and many civic leaders as a textbook example of community policing.

It was. Still, the beauty is the way it happened. McDonald had been called to Shirley Avenue last Tuesday evening on a noise complaint. The music was coming from the home of Kimberly Gray, who was seated in her front yard when McDonald pulled up, while her sister, Tahje Clark, helped Gray style her hair. 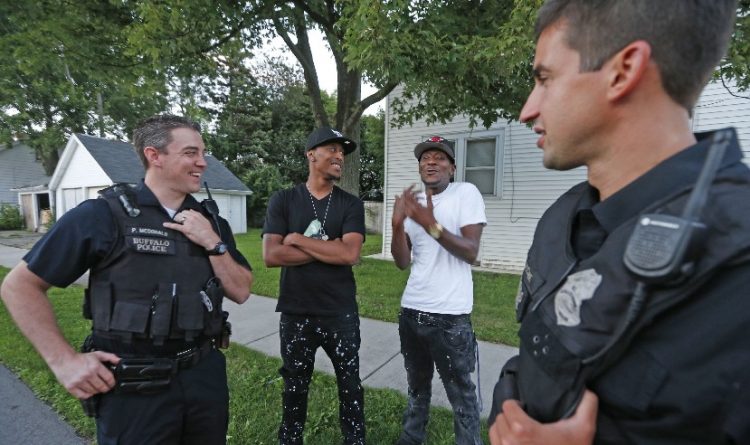 Tyrone Pace, who watched as his friend Albert Woolford threw a long touchdown pass to Officer Patrick McDonald in a street game, recalls the moment when McDonald "mossed" the defense - as in beat them deep, in the way of celebrated wideout Randy Moss. (Robert Kirkham/The Buffalo News)

McDonald typically works with his partner and close friend, Officer Shawn McCabe, who shares the same patrol philosophy. This time, with McCabe on vacation, McDonald was alone. McDonald said he was conscious of trying to find a reasonable solution, and Clark said he seemed "really cool and kind." After a few moments of good-natured debate about the music – Gray noted she already had turned it down once, and she said it seemed too early to be keeping anyone up – she said she'd lower the volume.

In the street, a little game of touch football continued throughout that conversation. Woolford coaches a Mighty Mite youth football team. He was driving home from practice with his children in his car when he saw his best friend, Jaseal Adams, Gray's fiancee, throwing around a football on Shirley Avenue.

They began kidding back and forth about whose kids were better, and a challenge went out: How about a game?

Woolford pulled over and they picked teams in the street, the adults playing "official quarterback" while a couple of kids served as receivers, just like a million Buffalonians had done before them.

As for the officer at the nearby house, Woolford was aware of him: How could he not be? But as he saw McDonald walking away, for a reason Woolford can't exactly explain, he took a few steps toward him and asked:

Do you want to play?

... when the police 👮 pulls up due to music nuisance BUT ends up playing street football 🏈 with the gang! 🔥🔥

Simple question, with so much to the answer.

This is what Woolford couldn't know: That officer Pat McDonald, 37, grew up on Tifft Street, in South Buffalo. That he had an older sibling named John III, only three years older, who shared a childhood bedroom, who was both McDonald's big brother and a constant companion. That when McDonald was 7, John died from a puncture wound to the back of his neck.

McDonald said his dad, a teamster named Jack McDonald, was so overwhelmed with grief that he took his own life, six months later.

A little boy who'd lost so much found solace and hope in two things: Beyond all else, there was family. McDonald's grandparents were a short bike ride away, and they did everything they could for McDonald and his red-haired sister, Kaileen. But the rock was their mother, Kathleen Barnett McDonald, who "was savvy and saved boxes of coupons" to help put groceries in the fridge, who refused to allow life to fall apart for her children.

"I had a built-in reason for failure," McDonald said, "and my mother was not going to allow it."

Then there were his friends, the ones who played street hockey on Folger Street or home run derby in the fields behind McDonald's house, where they'd set up old wooden pallets to use as an outfield fence. As for street football, are you kidding? Given the chance, McDonald said, they would play all day.

The telephone poles were end zones, and three completions were a first down, and there was no sensation – nothing – better than breaking free on an "out" pattern and feeling the ball as you pulled it to your chest, that instant when you made a catch that was as good as it can be.

Instead of breaking up street football game, Buffalo police officer joins in

So when Woolford asked McDonald if he wanted to play, and McDonald saw the crowd – the shirtless kids watching from the sidewalk, just as they'd watched in South Buffalo, 30 years ago – all separation ended. That neighborhood was his neighborhood, and any kid from Buffalo was going to say yes.

McDonald lined up. Nicholas, a good athlete, guarded him tightly. The first pass Woolford threw, on a little crossing pattern near a parked car, went awry. When McDonald lined up the second time, Woolford looked at this police officer leaning forward, and despite the gun belt and the protective vest and the flashlight and all the gear, Woolford mouthed directions and made a subtle hand gesture everyone understands:

McDonald did. He knew the secret: those fast sneakers. He pulled in Woolford's pass, crossed the invisible line for a touchdown, then pulled out a red Sharpie and theatrically signed the ball. Afterward, he kidded with his defenders that maybe they should fill out a police report, because they'd been robbed.

What made it all work, to him, is that none of it was planned. Sure, he's intensely conscious of the fragility of police relations these days in many African-American neighborhoods. Yes, he said, there's an exquisite balance – easy to describe, harder to make happen – involved with going on the kind of call that should be no big deal but can become one, all too easily. 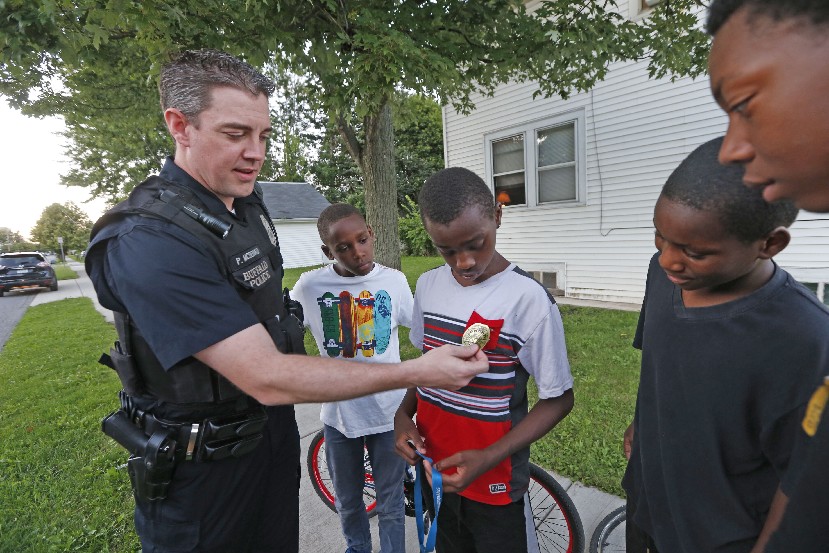 Officer Patrick McDonald shows his badge to neighborhood children who often play football in the street at the crossroads of Shirley Avenue and Suffolk Street. (Robert Kirkham/The Buffalo News)

He also knows this: He loves being a police officer. McDonald realizes that might sound "corny," as the kids put it. But he grew up in a factory neighborhood where he always assumed work would be a sentence, not a joy, that "any job meant you punch in, and then you're miserable."

McDonald was freed from that, years ago, on the day he was hired to work as a police dispatcher.

"It was an important role, and there was a sense you were helping to make a difference," McDonald said.

It inspired him to become a court officer, then to attend the police academy and to seek a full-time job on the beat, a dream that became real for him four years ago.

At night, he goes home to his wife, Danielle, and their two young kids, a son and a daughter who are about the same age as he was when he lost his brother and his dad. The pain of everything that was taken away is now balanced by the joy and depth of everything he's earned.

Yet every day, as he deals with city children at high risk, he is conscious of his own journey – and how easily it could have gone another way.

Tyrone Pace, a friend of Woolford's who watched last week's game from the sidewalk, said pickup football is only pickup football, but in this case it could mean a little more. The next time McDonald comes around at Shirley and Suffolk, maybe someone recognizes him, and in that recognition maybe something changes on the street.

"It's a matter of trust," Pace said, and McDonald agrees.

But if you ask what he really thinks about this Facebook video that's gone viral, the one that shows a long pass arcing across the evening sky?

Whenever he sees it, McDonald said, "I'm just glad I caught the ball."

Sean Kirst is a columnist with The Buffalo News. Email him at skirst@buffnews.com, leave a comment below or read more of Kirst's work in this archive.