The Buffalo Olmsted Parks Conservancy wants New York State officials to re-think its plan to convert the Scajaquada Expressway into a lower-speed boulevard.

The conservancy expressed concern Monday that the State Department of Transportation was nearing a design decision without additional public review for the 2.2 miles of Route 198 between Parkside Avenue and Grant Street.

The conservancy called for the stone arch bridge over Delaware Avenue to be restricted to pedestrians and bicyclists and connect to Ring Road. That would allow access from the Delaware Park meadow to Hoyt Lake.

It would also better connect the park to the museums along a cultural corridor.

The conservancy called for a slightly re-routed Scajaquada Boulevard to have an at-grade intersection at Delaware Avenue, using the current on- and off-ramps.

“We have a once-in-a-lifetime chance to correct a 1950s mistake: this dividing and intrusive expressway,” said Stephanie Crockatt, the conservancy’s executive director.

The conservancy was backed by a coalition of cultural organizations in or near the park, including the Buffalo History Museum, Buffalo Niagara Riverkeeper, Albright-Knox Art Gallery and the Buffalo Zoo.

“A reunification of Delaware Park’s two portions is new Buffalo thinking,” Crockatt said. “Strategically and physically linking our cultural assets is good for the economy, and will bolster the area as a destination for families, tourists and new businesses.

“If we take the time to design it properly, we will also benefit the environment, the water quality of Scajaquada Creek and Hoyt Lake,” Crockatt said.

The State DOT held its last public hearing on the project in January, and said an environmental impact statement is expected to be submitted to the Federal Highway Commission later this year.

The plan presented in January includes a number of speed-calming measures to reinforce the 30 mph speed limit put in place on the 198 immediately after an out-of-control car went off the Scajaquada and struck two children, killing one of them and leaving the other critically injured in May 2015.

The DOT’s price tag for the plan is $101 million. Crockatt said she believed the conservancy’s plan would cost about the same.

“When we look at the two intersections versus one intersection with the restored bridge, we think that’s probably an equitable trade-off,” she said. 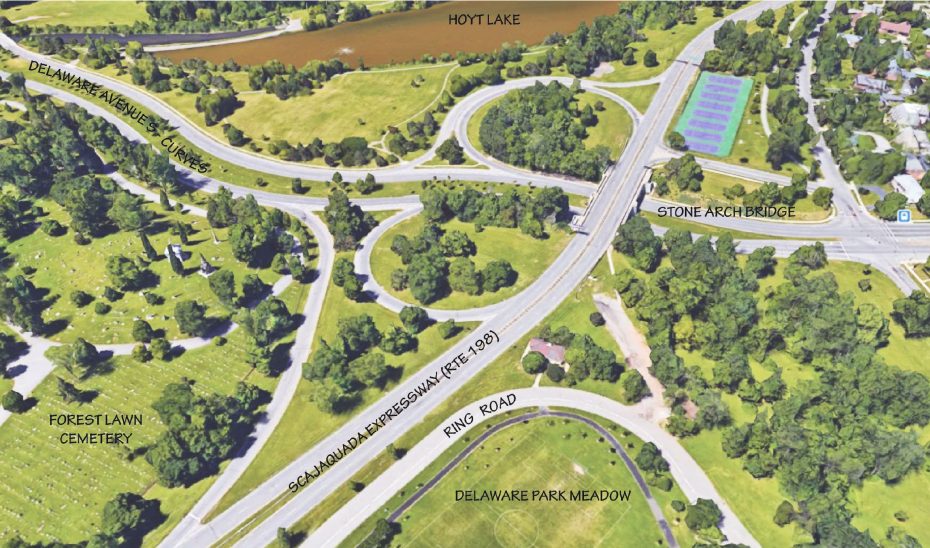 This is the existing view of the Route 198 – Delaware Avenue intersection.

The DOT’s plan was criticized by many in January for not doing more to reverse the effects to the park and surrounding area more than 60 years ago when the highway was built through the park. Some also expressed support, and said they were glad to see the state moving toward completion after years of indecision.

“We are asking the DOT to slow down, don’t rush the design and let’s work on a process to restore key Olmsted design features and create the cultural corridor,” said Dennis Horrigan, the conservancy’s chairman.

“The New York State investment in this corridor is not just about a transportation project,” Jedlicka said. “It will define the character and the potential for this region for the next 100-plus years.”

Jedlicka said the improvements to Ohio and Niagara streets show the importance of integrating transportation planning with other civic needs. She also said every decision made about the roadway would affect the health of Scajaquada Creek, which needs to be considered.

“This is a process that’s been dragging on for a long time,” Hoyt said. ”I think that there is a desire to see it come to a conclusion.

“There have been many public meetings and many stakeholder meetings, and the implication that the public hasn’t had an opportunity to comment is just simply not true. I think DOT has gone to great lengths to engage the public and individual stakeholder organizations, and shown a consistent willingness to compromise,” Hoyt said.