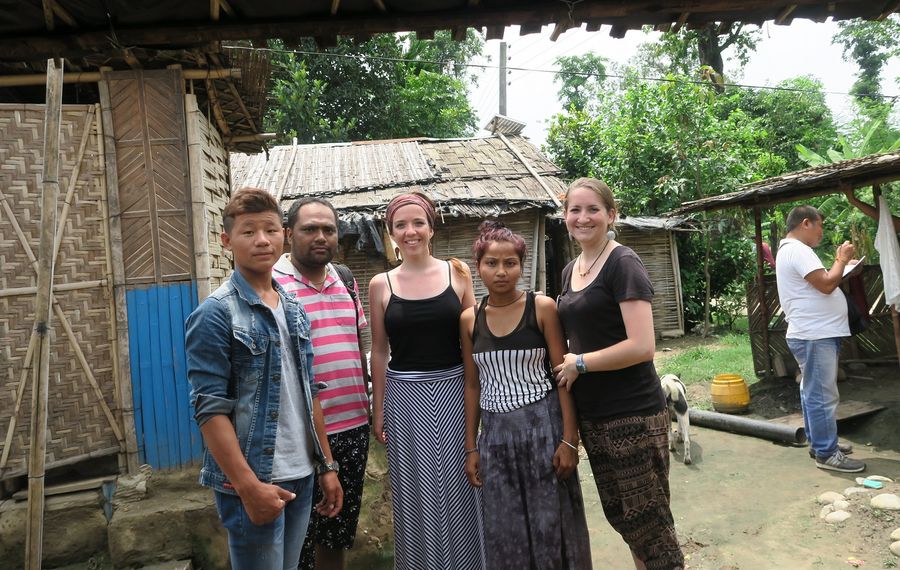 When Chelsea Ellis began making plans for a trip across the world to Nepal, the Buffalo teacher didn't just consult travel guides. She went to her students at school who had grown up in refugee camps there.

She gave them copies of a map of the South Asian country and asked them to label where they had lived and where they thought she should visit.

One student, Prakriti Biswa, a bright but shy 15-year-old, handed in her map marked with the refugee camp where she was born and another one where she later lived. She also shared that her older sister still lived in that second camp, known as Beldangi II.

As a teacher at Lafayette International Community School where many of her students are resettled refugees, Ellis was looking for ways to better understand and connect to them. She knew visiting Nepal would help, but actually going to a refugee camp and meeting the family member of a student would mean even more.

"Just being able to taste a tiny bit of what has happened to them," Ellis said last month before leaving.

In the lunch room at school, Prakriti told Ellis about her family. Prakriti's parents and elders were expelled from Bhutan where many Nepali had emigrated. In the 1990s, tens of thousands of them were exiled, but Nepal no longer considered them citizens. They ended up in refugee camps in the eastern region of Nepal, according to a report on local immigrants by the Partnership for the Public Good.

In 2013, Prakriti, her parents, her grandmother and younger brother were allowed to come to the U.S. but her sister, who was older and married, is still awaiting her chance.

Ellis wrote Prakriti's sister's name — Sangita Lohar — on the map she would take with her on the trip to Nepal.

Ellis, who grew up in Orchard Park and went to Houghton College, is an ENL teacher — English as a New Language, what used to be called English as a Second Language. She started teaching last year in a new program at the old Lafayette High School. Identified as a low-performing school, Lafayette was split into two programs: the International Community School and a Newcomers Academy.

Turnaround principal at Lafayette reaches out to West Side neighborhood

As an educator teaching English, Ellis, 27, said it's always helpful to know how students been taught English previously.

"Their history in school has a lot to do with which country they were born in and/or fled to in order to escape persecution, war, etc., and what subjects they were taught in refugee camps," she said.

New York State has more than 5,700 resettled refugees from Bhutan like Prakriti, according to the Partnership for the Public Good report. Nepali is the seventh most common language spoken among English Language Learner students in Buffalo's public schools, according to the district.

Buffalo schools are in session ... on Saturday mornings

A chance to go to Nepal

Ellis' opportunity to go to Nepal came from her roommate, Sondra Dawes, who is the senior case manager of a program for single, pregnant mothers at Jericho Road Community Health Center, which provides health care and social services to low-income people and immigrants on the city's West Side. A family making a trip back to Nepal had invited her to join them but wanted Dawes to bring along a friend so that she would have a traveling companion while they spent time with their relatives.

When Jericho CEO Chris Campbell heard about the trip, he asked Ellis and Dawes to visit an orphanage in Damak, near Beldangi II, the refugee camp. It was started by a coalition of Nepali churches, including one in Buffalo, and Jericho Road is exploring working with the orphanage. Jericho Road provided funding to help Ellis and Dawes get from Kathmandu, the capital of Nepal, to the eastern part of Nepal so they could assess the needs at the orphanage.

Two nights before Ellis left, she went to Prakriti's house on the West Side. Ellis recorded videos of Prakriti, her mother, grandmother and other family members sending greetings to Prakriti's sister. They gave Ellis gifts to take to their relatives: an iPhone, some jewelry and handwritten notes. Prakriti also gave her two photographs, one of her sister and one of herself with her sister, which Ellis copied three times and laminated, figuring they may be crucial to finding Sangita.

Ellis, Dawes and the family they were traveling with arrived in Kathmandu on June 19 after nearly 40 hours of travel, including a 17-hour layover in New Delhi. Two days later the women flew to Damak to spend several days based at the orphanage.

Sachin Rai, the son of the couple that runs the orphanage, escorted Ellis and Dawes to the refugee camp about three miles away.

Ellis described what happened next in Facebook messages and emails:

"When we arrived outside of the office, there were several people eager to help immediately, standing around their motos. Sachin translated for us to a group of 5 men who all took the laminated pictures I had of Prakriti's sister," she wrote. She also gave them the map that Prakriti had drawn on.

"The men started passing the photos and map to dozens of people that I quickly lost track of where they were. We were directed to get back in the tempo with no other details. Two people got on their moto and led us to a destination. We arrived at a home in the camp and were confused, but no one could explain why we were there (language barrier), and the men on the moto kept driving (they left) after they pointed to stop at this particular house."

Ellis and Dawes got out and met a woman who was sitting outside a thatched house. They had no idea who she was.

"She welcomed us into her home. We sat on her bed and she started preparing food in a different room. We didn't know who the woman was (she didn't match the photo) and we didn't know what to do. After about 30-45 minutes, we realized that woman actually was Prakriti's sister! We realized because she asked Sachin if we had anything from her family to give her. She looked very different from the photos, so we didn't think it could be her (the photos are a few years old, from when she was a teenager)," Ellis wrote.

"Once we realized, we all laughed a lot and Sondra and I were double checking it was actually her because we didn't believe her at first. We showed her the photo and asked the name of her sister, what city her family lives in, and her mom's name. It was her," Ellis wrote, adding a smiley face emoji.

Lohar had a young daughter and is married. Their home has a porch-like area, a kitchen and two bedrooms. There's also an outhouse.

Ellis and Dawes went on a tour of the refugee camp. They visited the school at the camp, where Prakriti had gone to school before coming to Buffalo in 2013. They were able to briefly talk to Prakriti from the school using Facebook video chat on Lohar's phone.

Ellis was impressed by how proud the children were of their school. The principal of the school, who has family in Syracuse, showed them around.

"The students at the refugee camp were in uniforms and at Lafayette International Community High School, our students wear uniforms and many of them like the uniforms, contrary to what I would think would happen. In Nepal, school seems to be an honor for these kids. I saw them dusting off their shoes and trying to shine them, removing dust from their shirts if they saw a small speck on them, etc.," she wrote.

She found it helpful to see the classroom environment, from posters on the walls of shapes to how the teachers in the classroom write the subject and topic of the day's lessons. She saw on one blackboard "Subject: Science. Date: 23/6/2017. Topic: Animals and plants. A buffalo eats grass."

They also visited a church at the refugee camp started by Purna Tamang, who is the pastor of a Nepali church in Buffalo.

When they got back from the church, Lohar prepared them dinner, a feast of chicken, lentils, vegetables and rice. Prakriti's uncle joined the group and Ellis told them what a good student and hard worker Prakriti is. She gave them the gifts she had brought from her and showed them the videos on her camera.

"She smiled the most when she listened to the last message on the video from her little brother," Ellis said.

Going to the camp was an eye-opening experience for Ellis. "Ever since I started working with refugees, my biggest dream has been to visit a refugee camp, and I never imagined I'd be able to make a visit so personally related to one of my students," she wrote. "So I felt very excited before going and at the start of arriving at the camp! Once the day continued and the newness wore off a tad, I started feeling very humbled."

She was amazed by how generous people were. They were offered food wherever they went. People seemed more than happy to help them track down Lohar.

Ellis and Dawes got back to Buffalo in early July and relayed their assessments of the orphanage to Jericho Road. Ellis also shared photos with her principal at Lafayette, Jon Starkey.

Campbell, of Jericho Road, lauded the young women for taking the journey. "I think it's amazing," he said. Jericho Road is planning on opening a small medical facility in the Himalayan area and also setting up a program for donors from abroad to sponsor the children at the orphanage.

Starkey believes Ellis' experience will make her a better teacher than she already is. She'll be especially suited to dealing with resettled refugee students who are in danger of dropping out, he said.

She'll be able to say to them: "You're having some trouble and thinking of dropping out? Think about where you came from. You came all the way from that refugee camp."

On July 15, Ellis arranged to meet with Prakriti to talk about the trip. At a table outside the West Side Bazaar on Grant Street, Ellis gave her student a little gift from Nepal: a notebook with a cover that looks like the Nepali flag.

Prakriti asked her teacher what she thought of the weather. She remembered how hot it was in the summers in eastern Nepal. Prakriti knows many people associate snow-covered Mount Everest with her country, but she explained that she grew up far from the world-famous mountain range and never saw snow falling until she moved to Buffalo.

"I stayed in the window to see the snow," she recalled of her first winter in Buffalo.

Prakriti hopes one day her sister will join them in the U.S. She'd also like to go back and visit Nepal someday, too, she said. "I want to see Mount Everest," she said.

She was grateful that her teacher had taken the time to go to Nepal.

"I feel so happy that she goes to my country where I'm from," Prakriti said with a broad smile.