Blank walls of Buffalo: Your days are numbered.

We are in the thick of high mural season, when artists armed with buckets of primer and cans of spray paint fan out across the city to turn monochromatic walls into canvases bursting with color.

Some of the murals are in prominent spots. Others are hidden. So if hunting for new public art sounds like a good time to you, set aside a Sunday afternoon to check out these five new eye-popping murals and murals-in-progress:

On the north, east and west faces of Joe's Deli at the edge of the ever-hipper Hertel strip, a strange vocabulary of chirping birds, folk art symbols and icons pop out of an arresting backdrop of bright teal (pictured as lead image).

The mural, which features a prominent Buffalo on its west side, is the work  of Los Angeles-based artist Bunnie Reiss. For many years, Reiss has been building her repertoire of symbols, drawn from Eastern European folk art and other traditions, into a definitive style.

Reiss' idiosyncratic approach has gained her a substantial following and plenty of media attention, resulting in larger commissions such as the Joe's Deli job. Juxtapoz described her as "a creative enigma who seems to be in touch with a parallel universe."

The new piece is sponsored by the Albright-Knox Art Gallery's public art program with an assist from the New Era Cap Foundation.

"I wanted to honor my Eastern European heritage and also honor my Polish heritage, knowing that there is a very large Polish community in Buffalo," Reiss said in a phone interview from Detroit, one of three eastern cities she's painting in this summer. "I've put my own twist on it and brought what I am hoping to be a lot of happiness and pleasure to that neighborhood."

"The Mothership," a mural by Team Razor Wire, adorns a building at East Delavan and Longview avenues. (John Hickey/Buffalo News)

The geometric lines and retina-stressing colors of Team Razor Wire are becoming a familiar sight in venues around Buffalo, from sharp-edged new walls on Bailey Avenue to a glowing, golden tower in the shadow of the Tri-Main Center on Jewett Avenue.

This piece, which occupies the east side of a brick building on this industrial stretch of road, can be viewed either as a counterpoint or a competitor of Shantell Martin's sprawling black-and-white mural "Dance Everyday" on the side of a derelict factory nearby.

Because it is hidden, the artistic duo -- Nicholas Conrad Miller and Christopher Kameck -- have created a kind of mini-billboard on the west-facing wall to entice viewers to explore the piece more fully. When you head around the back on Longview, the work unfolds in sharp, bright lines of red, orange and gold. If you didn't know it was paint, you might think the place was on fire.

It's a neat trick, smartly situated in a changing neighborhood. 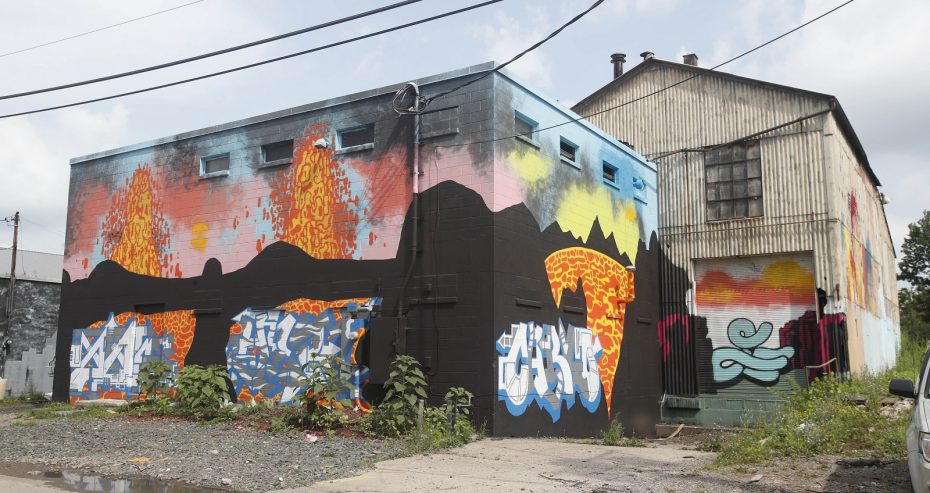 The Ken Price Tribute is on a warehouse at 140 Chandler St.
(Sharon Cantillon/Buffalo News)

While the Albright-Knox Art Gallery's public art program accounts for the bulk of the new projects we've been seeing on city streets lately, there are also many off-the-radar efforts by underground artists in out-of-the-way locations.

Chandler Street, a dusty stretch of pockmarked road near Wegmans on Amherst Street, has long been a haven for Buffalo's graffiti artists, who have canvassed its run-down warehouses and industrial spaces with an ever-evolving series of tags and more ambitious projects.

One of those projects includes a mural based on the work of American sculptor and painter Ken Price, who was the subject of a 2013 Albright-Knox Art Gallery exhibition. It follows a similarly successful adaptation of a Burchfield Penney Art Center exhibition on the comix artist Spain Rodriguez that appeared near the Central Terminal in 2012.

The piece is the work of an anonymous collective of current and former graffiti artists working to make artwork normally confined to white-walled galleries more accessible to the general public.

"Once something leaves those white-walled spaces and comes to the streets, it becomes a totally different thing," one of the artists said. "I think it's work that could be appreciated by anybody and everybody, and I don't think it should be difficult to access." 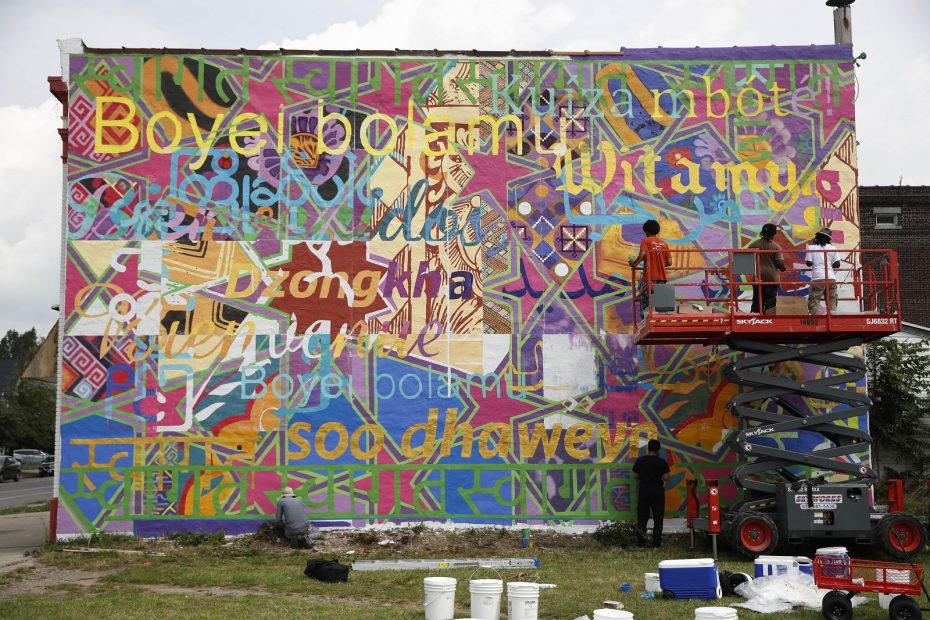 "The Welcome Wall" at 751 Fillmore Ave. is nearly complete. It features the word Welcome in 15 different languages. Local artists and artists from Philadelphia, Pa., work on the mural, Friday, July 21, 2017. Community members painted nearly half of the mural. (Sharon Cantillon/Buffalo News)

The south face of the former Copacabana Jazz Club in the Broadway-Fillmore neighborhood now features a wall of kaleidoscopic color meant to broadcast a welcome message to Buffalo visitors and newcomers of all ethnicities and backgrounds.

To that end, intricately designed panels created on parachute cloth and pasted to the building are overlaid with the word "welcome" in 13 different languages. The piece is part of the Albright-Knox Art Gallery's public art program.

It is the work of Philadelphia-based artists Keir Johnston and Ernel Martinez. The duo, known for its work on community issues, worked with stakeholders in the neighborhood to create the piece.

"Because the project can be outlined and preplanned in a '“paint-by-numbers' format, individuals of all skill levels came together and participated simultaneously in the project," an Albright-Knox release noted. "This ensured a significantly broader audience was able to engage in the production of the mural." 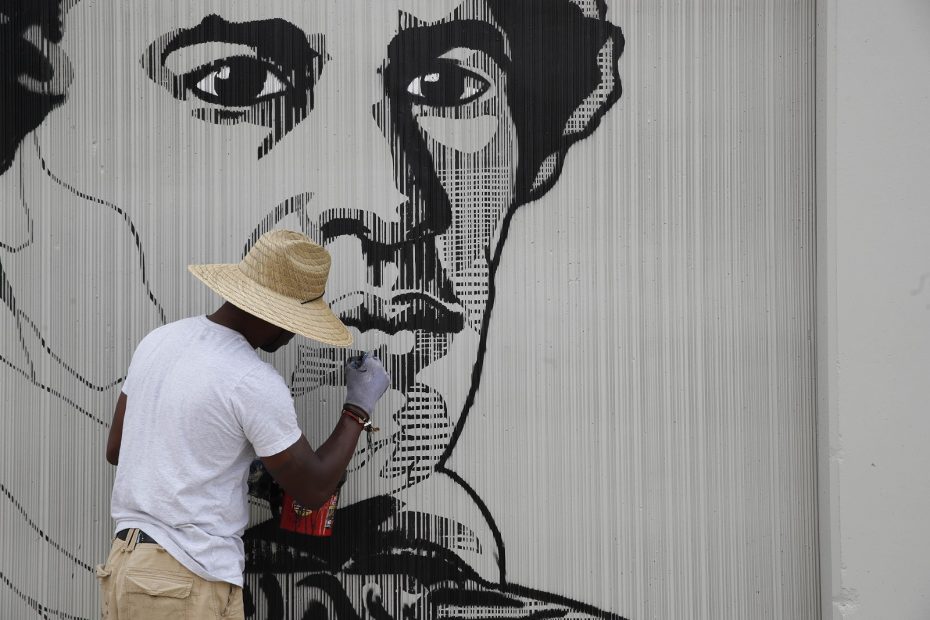 A large wall at the corner of East Ferry and Michigan Street will feature 28 local and national civil rights leaders. Buffalo artist Edreys Wajed works on a painting of Buffalonian Williams Wells Brown, who worked on a steamboat on the Erie Canal and helped fugitive slave escape in the 1830s and 18440s. Wajed will be doing seven of the paintings. (Sharon Cantillon/Buffalo News)

Now in its beginning stages, this long-planned and ambitious mural on a 300-foot concrete wall in the Cold Springs neighborhood is designed to spotlight local and national black leaders in the civil rights movement.

A newly formed collective of artists has spent several days prepping the walls, which now feature line drawings of major figures from the movement and from black history, including the Rev. Martin Luther King Jr., Malcolm X and Frederick Douglass.

Beyond its immediate visual impact on the neighborhood -- and on the grey, concrete wall that surrounds the nearby NFTA bus depot -- the project has also served to unite the artistic community of the East Side.

After initial plans to have Tingley execute the entire project were roundly criticized, the Albright-Knox added more artists of color and East Side artists formed a new collective.

This mural will be the first fruit of that effort, with many more to come.