The plaque, a replica of a gift to the people of Dunkerque, France, hangs in the second floor corridor of Dunkirk City Hall, a couple of blocks from Lake Erie. It has been there for decades, a gesture to emphasize a bond of deep affection, and Dunkirk Mayor Willie Rosas sees it as a daily reminder of civic purpose.

"We need to remember," he said, "great things can happen here."

The movie blockbuster of the summer, "Dunkirk," opens this weekend. It portrays the evacuation of hundreds of thousands of Allied troops from the French city, under dire threat from Nazi forces, in the early days of World War II.

The film also resonates in the Chautauqua County city of Dunkirk, where an economically wounded Great Lakes community recalls how a collective effort to aid its staggered sister city, more than 70 years ago, gave it a moment of brilliant international attention.

[Jeff Simon: "Dunkirk" too good to be truly great]

Collier's Magazine – which once reached millions of readers – sent Quentin Reynolds to write about Dunkirk. The famous war correspondent heaped lavish praise on the community, and Collier's maintained the city offered "a humanitarian plan adopted by its residents that could abolish war."

You're reading that correctly: An international plan, born in Dunkirk, to abolish all war.

Seven decades later, Rosas hopes the film reignites at least an ember of that kind of civic faith. 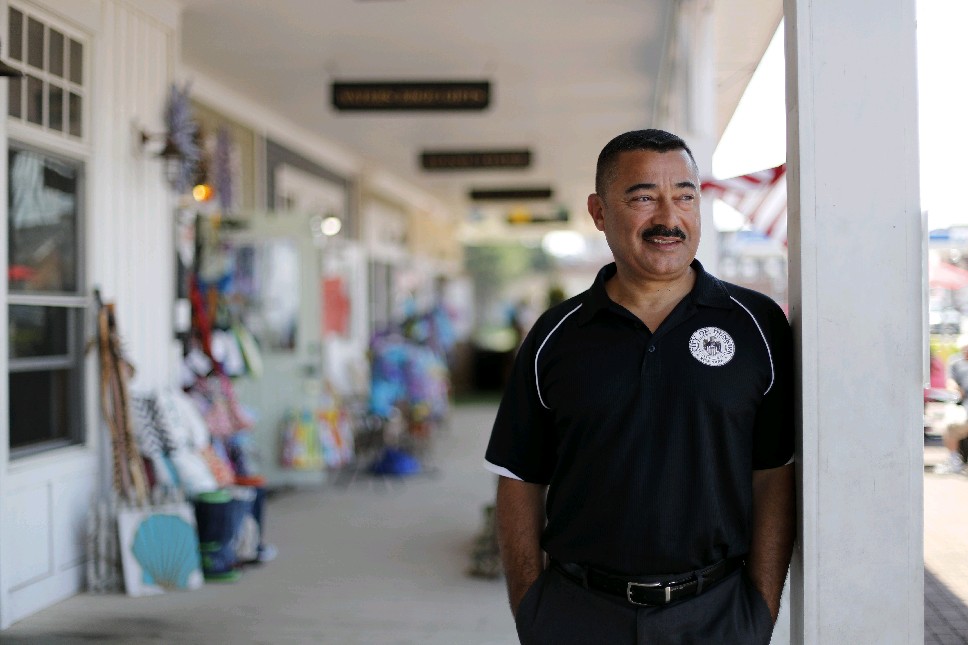 The mayor said his staff has been in touch with publicists from Warner Brothers, who sent the city many posters and several banners. Today at 4:30 p.m., at the Dunkirk Movieplex 8, theater management is providing free popcorn and beverages to any veteran or active servicemember in the audience. Dunkirk historian Diane Andrasik will offer a presentation on the friendship between the cities.

That link, all but forgotten now, was once as close as life and death.

In 1942, Dunkirk Mayor Frank Bartela made a shortwave radio broadcast to residents of Dunkerque, then occupied by the Germans, reminding them of how the cities shared "a common cause, a common aspiration."

Four years later, the war over, the link drew even tighter. Residents of Dunkirk, inspired in part by editorials Wally Brennan wrote for the Dunkirk Evening Observer, began a community drive to aid their ravaged sister city. Children saved pennies or, as Anthony Vacanti recalls, wrote letters and sent pencils and notebooks to their young French counterparts.

Bags of seed, radiators, baby carriages, underwear, even cows, goats and horses: More than $75,000 in cash or goods was donated to the cause.

On Thanksgiving Day 1946, a celebration of that bond — "Dunkirk to Dunkerque Day" — drew the admiring attention of the free world. President Harry Truman sent best wishes. Eleanor Roosevelt wrote a "My Day" column, praising the effort. The late David Klocko, then a 9-year-old resident of Dunkirk, was part of a CBS message to Dunkerque, broadcast around the world. 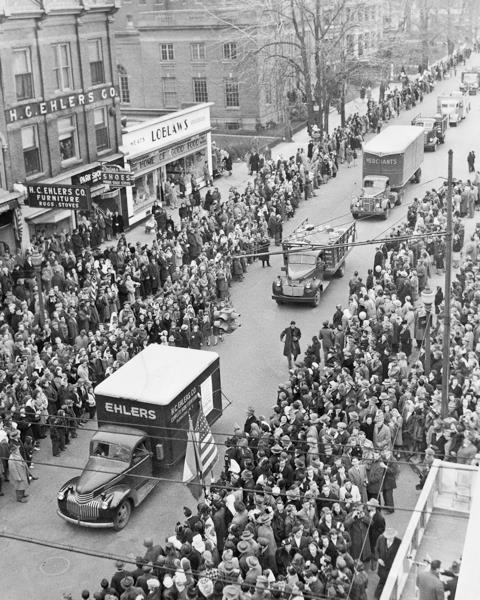 Bill Thompson, now 84, was a 13-year-old accordion player who performed during a celebratory banquet at the local fairgrounds. He watched the parade from a balcony of a downtown hotel, where a Canadian veteran — blinded in combat in Europe — asked the child to describe everything he saw.

"All he knew," Thompson said, "is what he was hearing."

Meyer Berger, who later became a Pulitzer Prize-winning journalist, paraphrased Winston Churchill in calling the event "The Miracle of Dunkirk," then turned it into a long piece for the New York Times Magazine. Readers of the Times saw a photo of a bandaged child in Dunkerque playing with a toy airplane in front of a chalkboard message of thanks:

In Collier's, Reynolds made the point that intimate international connections between cities — an initiative to skip past national governments — might be the new, best way of avoiding war. The founders of the event took those words to heart. A group called the Dunkirk Society embraced efforts to aid other European communities.

The membership spoke in earnest of leading a global movement toward peace, based on the concept of Dunkirk-to-Dunkerque.

Yet as Begier said: "That's when we had all the heavy industry."

While Dunkerque, France rebuilt, loftier dreams vanished as the economic foundation crumbled in Dunkirk, N.Y. A sequence of plant closings and civic tumult, extending over a half-century, rattled the once-prosperous little city. Dunkirk has lost 35 percent of its population since a postwar peak of 18,205 in 1960. Almost 40 percent of its children live in poverty. Like so many communities, it's been scarred by opioid abuse.

The Dunkirk-to-Dunkerque connection continued into the 1970s, with officials from the cities trading occasional visits, before the connection essentially petered out. A downtown plaque commemorating the 1946 event remains bolted into an empty bank building, only a few feet away from a "for sale" sign. 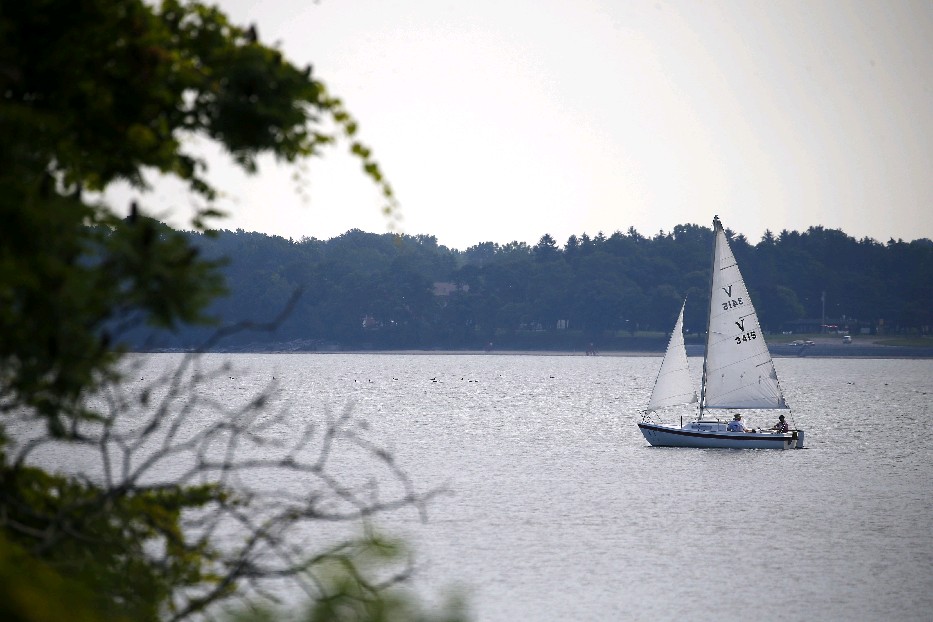 To Rosas, whose Puerto Rican lineage makes him the first elected Latino mayor in state history, the movie serves as a potential lever for dislodging what he sees as Dunkirk's greatest burden.

That cynicism, he said, is based in part on a long history of shaky leadership, and in part on too many dreams that went awry. The mayor is a retired state trooper who decided to run for office after stopping in one day at the city clerk's office. He watched as a Latino couple who spoke little English struggled to pay a tax bill because no one could help them with the language.

"If I wanted change," Rosas said, "I had to be that change."

He and his wife had already had the familiar upstate talk about whether to stay or go. They have relatives in Florida and could have settled there, comfortably. But they also have family in Dunkirk. They thought about how much they love the town, how easy it is to get around ...

And about the beauty of Lake Erie.

[Samantha Christman: How Dunkirk tried, without luck, to save a J.C. Penney's] 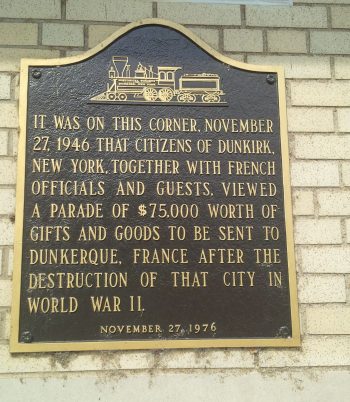 Plaque marks the location of 1946 parade and outpouring of support for Dunkerque, France. (Photo courtesy of Judge John Kuzdale)

The waterfront remains the core link between the cities. In the early 1800s, a businessman named Elisha Jenkins suggested the name "Dunkirk," saying the harbor reminded him of Dunkerque, France.

"You've got to look carefully to see it," Andrasik said of the resemblance, but certainly both cities have striking harbors.

So Rosas studies Buffalo and other communities where lakefront property translates into rebirth, and wonders simply: Why not here?  His brother, Hector, who runs festivals and special events for the city, speaks of how "Music on the Pier" and other events have become shoreline magnets, drawing thousands of summer visitors to Dunkirk.

The mayor dreams out loud about cleaning up some of the prime harbor frontage lost to the old NRG power plant, and about the hope of coordinating more services with nearby Fredonia. He contends greater efficiency in government, meshed with patient efforts to protect and create jobs, might lead to stability — a prerequisite for revival.

In many ways, looking back is pointless: No one expects a second act for the smokestack industries that once nurtured so many Western New York communities. But the movie has inspired Rosas to try and contact officials in Dunkerque, France, seeking new meaning in what's essentially a lost relationship.

"There were people in need," he said, "and the generations before us reached out." That selflessness created a high point in civic history. It gave a little city the belief that it could change the world.

Finding that spark, 70 years later, is the true battle of Dunkirk.

Sean Kirst is a columnist with The Buffalo News. Email him at skirst@buffnews.com, write to him in care of The Buffalo News, One News Plaza, Buffalo 14240 or read more of his work in this archive.