A month ago, BN Soccer tracked which National Premier Soccer League players in the Midwest Region's Great Lakes East Conference stood out from among their peers in the first half of the season.

Now, as the Erie Commodores and Dayton Dynamo prepare for their playoff match-up at 7 p.m. July 22 at Gannon University, it's time to recognize whom we think are the most valuable players over the course of the entire campaign. It's noteworthy that only five of the 11 players selected for the mid-season team are included in this end-of-season list.

Team administrators and coaches from around the conference were consulted in preparation for this post, and there was no requirement that every team must be represented in the side.

Why: A repeat selection from the mid-season team, Banahene edges out Erie's Jorge Alvarez Prendes because the Lancers' first-choice goalkeeper faced more shots and didn't have the luxury of a dominant back four.

The former Buffalo State College keeper's positioning and reflexes were immaculate in his first NPSL season and despite standing under 6-feet tall, Banahene was commanding in his goal box and aggressive in contesting crosses.

OUTSIDE BACK: Eric Hutton, Dayton Dynamo

Why: Hutton won't stick out in the end-of-season box score, but he's invaluable to the playoff-bound Dynamo. A stable presence with the versatility to be effective at both left back and holding mid, the Wright State soon-to-be junior has been the club's engine. Hutton's influence was evident in Dayton's 1-0 blanking of AFC Cleveland, and his absence noteworthy in Dayton's wild 3-3 draw with Buffalo.

Why: The rugged New Zealand native has nearly tool you want in a defender: He's positionally sound, fierce in the tackle, dominant in the air and tremendously durable. The former University at Buffalo center back - now headed to Old Dominion for his senior year - quickly formed a strong partnership with Jordan Sinclair and was the most consistent player for FC Buffalo across all 12 games. 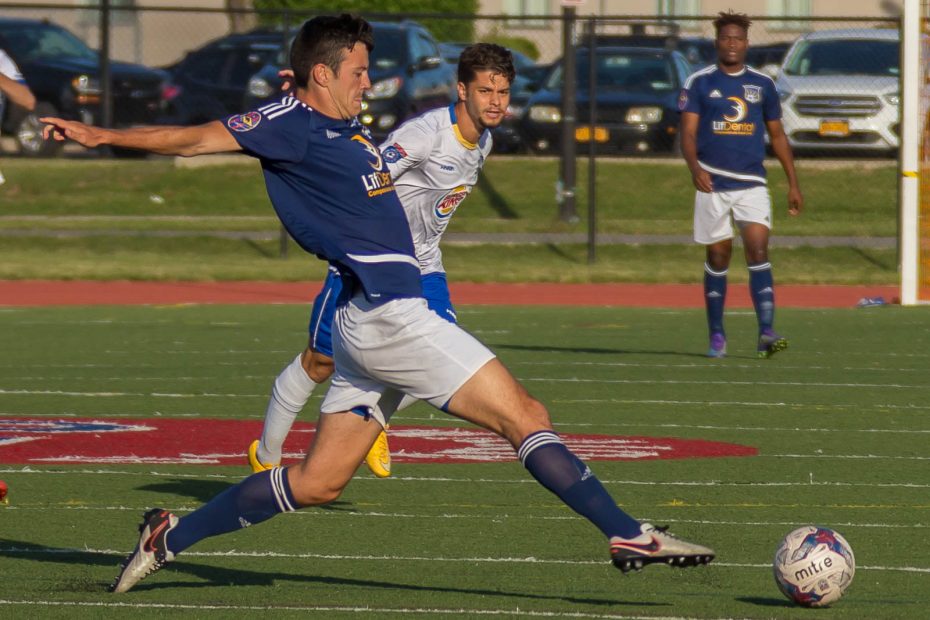 FC Buffalo defender Fox Slotemaker reaches to knock the ball away from an onrushing Erie player. (Don Nieman/Special to The News)

Why: It's too bad that Kebe's international visa expired and he'll be in Senegal when the Dynamo visit Erie in the first round of the Midwest playoffs. The 38-year-old former professional plays with the youthful exuberance and athletic grace of someone half his age, and watching him effortlessly track down opposing forwards leaves no doubt why he was deemed talented enough to represent CSKA Moscow in the UEFA Champions League.

OUTSIDE BACK: Ashley Phillips, Erie Commodores

Why: When time ticked down on the Commodores and John Melody's team needed a goal, they turned to their...converted left winger? Phillips' 88th-minute goal to beat Rochester and 81st-minute goal to down AFC Cleveland were both decisive in the Great Lakes East playoff race; if Erie draw both of those matches and all other results hold, the Commodores would have finished sixth instead of first.

An outside back for a portion of the season, Phillips' clutch contributions and positional versatility earn him a spot in this XI, narrowly nudging aside AFC Cleveland's David Jordan and Fort Pitt's Jack Webber.

Why: Perhaps it was an oversight on our part to leave the Lancers' maestro out of the mid-season XI, but Fernandes' form was even more unmistakable as the season progressed. A lethal set-piece taker with the temerity to run at defenders, the Rochester winger was a thorn in the side of several foes this season.

The Temple University attacker, a Churchville-Chili graduate, was part of one of the shortest group of midfielders in NPSL history with Antonio Manfut and Rafael Godoi, but the trio's collective quickness and creativity compensated for their size and made marking them a serious chore.

Why: Ezana Kahsay piled up the goals and Phillips struck when it mattered, but Campos was Erie's metronome throughout their push to top the table. The midfielder, who previously had a cup of tea with the Pittsburgh Riverhounds of the United Soccer League, is a supreme manager of the game, unflappable in tense moments and acts essentially as a second coach for the club.

Campos' role in his team's success allowed him to narrowly beat out Syracuse FC's Nate Bourdeau, who had a far better statistic season. 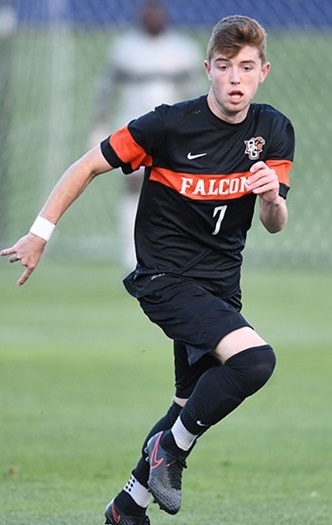 Tate Robertson, who plays at Bowling Green, was terrific in his first season with Dayton. (via Bowling Green)

Why: It wouldn't be a stretch to call Robertson the best player in the Great Lakes East.

Pace, intensity and ruthlessness in the final third will take you a long way in the NPSL, and the Bowling Green midfielder-forward boasts all three traits.

He's equally adept at setting up teammates for chances as he is at finding dangerous pockets of space himself.

Why: While Beck had a forgettable display in the season finale at Buffalo where he was issued a red card for an ugly tackle and ensuing skirmish, the longtime Royal was a menace for much of the season.

Strong and deceptively quick, Beck - part of Cleveland's inaugural team in 2012 - is a deft finisher; just ask Rochester, which conceded two to the Royals' talisman against the run of play in a crucial late-season match.

Why: The big English No. 9 must be eager to take his talents to NCAA Division I Wright State this fall, as he chewed up Great Lakes East competition to the tune of six goals, including a brace in the season-ending win over Erie.

Adept with his back to goal, good at lowering his shoulder to maneuver around center backs and opportunistic at poaching in front of the net, Stone carried a lot of responsibility as the lone striker, yet did his job with aplomb.

Why: It was a toss up between Shackleford and Erie's Kahsay, but FC Buffalo's Jamaican striker thrived as the season progressed, tying Kahsay for the conference lead with seven goals on the campaign and sparking the Wolves' late-season surge.

A fan-favorite for his colorful personality and positivity, Shackleford overcame an in-season ankle injury to find his scoring touch after a sluggish start.