Working the night shift at the White Arrow Sunoco Station on Southwestern Boulevard would not be most people’s ideal way to spend Christmas Eve, but Jeri Marcinkowski didn’t mind so much; the 21-year-old student planned to spend what was sure to be a slow night studying for her classes at Orchard Park’s Bryant & Stratton Business Institute.

It also didn’t hurt that the extra cash would go toward funding her most ardent obsession: watching from “the oranges” as her beloved Buffalo Sabres played at the Memorial Auditorium.

When Marcinkowski's mom dropped her off at work at around 6 p.m on that bitterly cold Christmas Eve in 1985, it was the last time she would ever see her “very quiet" and "special” daughter alive.

At the same time across town, 23-year-old David Walentynowicz was driving his old Buick convertible through a fresh dusting of snow, en route to pick up his ex-girlfriend, 21-year-old Sheila Curtin, from her Ashland Avenue apartment in the Elmwood Village.

According to Buffalo News reports from the following week, Curtin had agreed to meet with Walentynowicz that evening so that he could return a ring he had once given her and so that the two could discuss their recently ended relationship. It was a breakup that David was having a difficult time accepting. Before leaving home, Curtin told her roommate that the meeting would take no more than 40 minutes.

In one sense, she was right: Within the hour, both she and Marcinkowski would be violently slain by an “unraveling” Walentynowicz in one of Western New York’s most heinous holiday murders.

The quietest of his parents’ four sons, Walentynowicz grew up in the Ransom Oaks area of Williamsville. A 1980 graduate of Williamsville North High School – where he played safety on the school’s football team – David was remembered by one former teacher as being “respectful, very conscientious and disciplined,” The News reported Dec. 29, 1985. 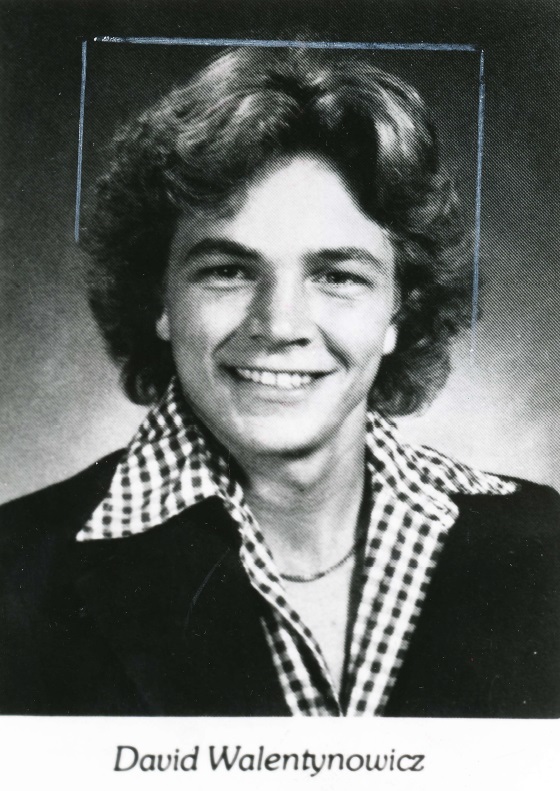 In a Jan. 12, 1986 interview with The News, David’s father, Fred Walentynowicz – who owned the Elmwood Avenue convenience store where David Walentynowicz worked – recalled how there were two very different sides to his son: “He always liked to do violent, stupid things. … [David] shot at cats and owls and would fight at the drop of the hat. Would beat up any burglar who burglarized the store, but was also known to buy snacks for needy people who came in the store.”

A lifelong hunter and gun enthusiast, Walentynowicz was known to own an extensive collection of knives, guns and other weapons.

In 1983, Walentynowicz met 19-year-old student and aspiring model Sheila Curtin, and the two quickly became an item. Curtin’s mother later recalled to The News that Walentynowicz had been “intellectually very bright,” an attribute that attracted her daughter to the relatively reserved young man. By the following year, the couple were sharing an apartment in Buffalo’s Elmwood Village, just a few blocks from where Walentynowicz worked, and were discussing marriage.

But their relationship was never as idyllic as it appeared to be; it was no secret among their close friends and family that Walentynowicz had “slapped and pushed” Sheila on multiple occasions and that the couple frequently argued.

One unidentified friend told the News on Dec. 29, 1985, that although “Sheila and David were warm, loving people ... there was a part of them that nobody knew,” adding ominously that when Walentynowicz saw Curtin talking to other men “it did things” to him.

When Curtin ended their relationship in the fall of 1985, Walentynowicz’s violent and controlling tendencies toward her only intensified.

In the weeks following their breakup, Walentynowicz began following Curtin around her Elmwood neighborhood, and he was known to visit the bars she and her friends frequented, always arriving only minutes after she did, according to a Jan. 12, 1986, report by the News.

“She was ‘in like’ with him. He was beyond in love with her,” Lt. Thomas E. Rowan of the Cheektowaga Police Department later said of the situation. “It’s as dangerous a combination as a match and gas fumes.” 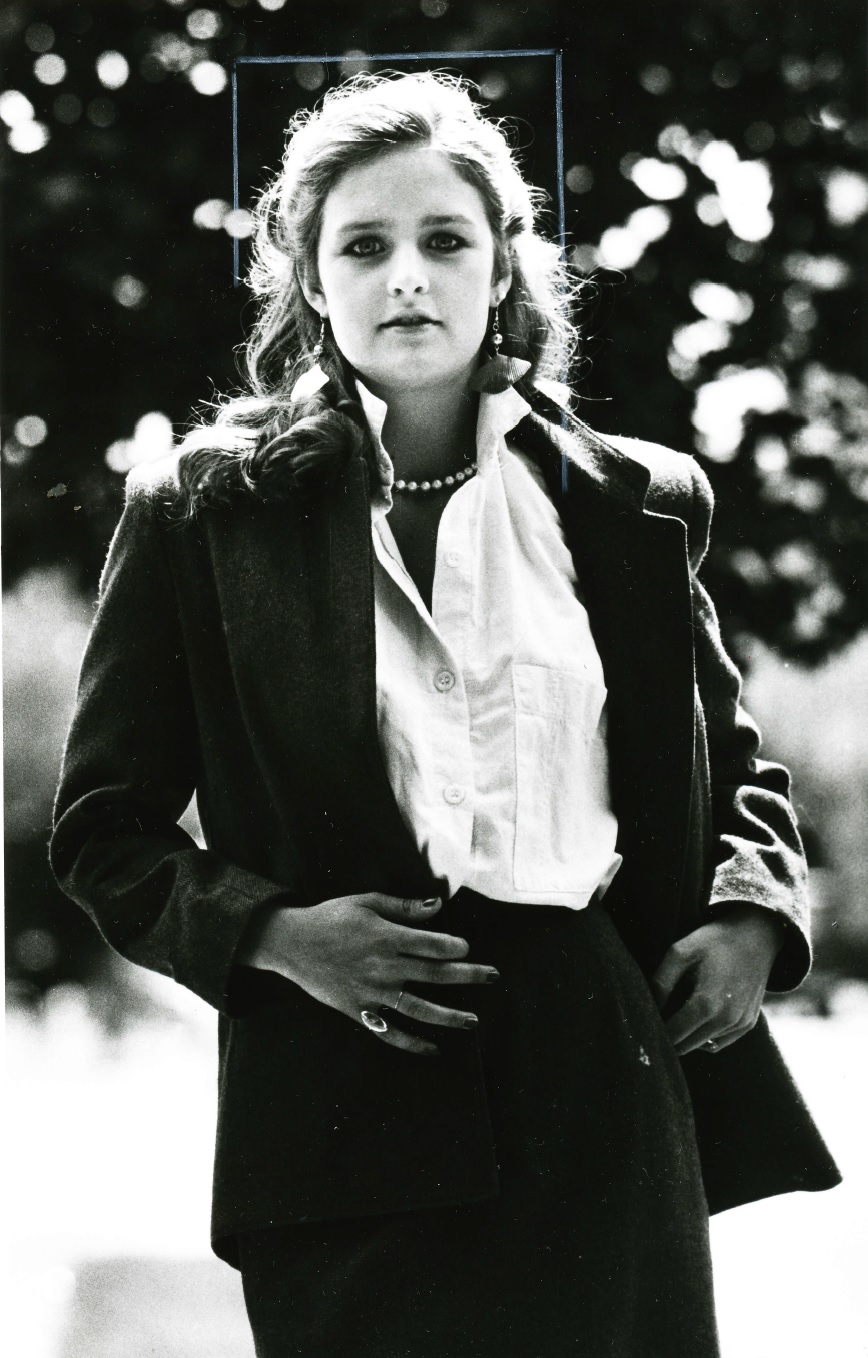 In the days leading up to Christmas, Walentynowicz’s entire personality began to change, so much so that his father seriously considered seeking psychiatric help for his son. “The look on his face, you knew there was something wrong with him,” Fred Walentynowicz told the News. “My son was a sick young man, no doubt about it.”

That same week, Walentynowicz withdrew most of the cash from his bank account – more than $600 – and attempted to pawn one of his shotguns and a crossbow at a Bailey Avenue pawn shop, telling his father he needed the money to visit his brother in California.

On Dec. 23, 1985, a distraught Walentynowicz followed Curtin into an Elmwood Avenue bar, where he immediately spotted her with another man. Enraged with jealousy, Walentynowicz shattered a shot glass on the floor and started a brawl with the bar’s bouncer.

The next day, Walentynowicz called Curtin and asked her to meet with him, so that he could return a ring he had given to her while they were still together. Despite the prior night’s violent episode – and her friends' pleading with her not to go anywhere with him – Curtin accepted Walentynowicz’s invitation.

David picked Sheila up at 6 p.m., then drove them both back to Cheektowaga’s Garden Village Apartments off of French Road, where he lived with his father.

What happened next largely remains a mystery, but this much is certain: At some point shortly after they arrived at the apartment, Walentynowicz beat Curtin about the face and head, strangled her to death with her own winter scarf, then stabbed her dead body several times in the chest with one of his many hunting knives.

According to News reports from Dec. 28, 1985, Walentynowicz made no effort to hide his crime before fleeing the scene; he left the knife he used to stab his former girlfriend on the kitchen counter and her body out in plain sight. Investigators later noted that this was an indicator that he never planned to live long enough to pay for his likely premeditated crime.

Walentynowicz also shattered all of the mirrors in the house before leaving. Packing a sawed-off shotgun and an 18-inch machete in the car with him, Walentynowicz then fled the crime scene in his 1971 Buick convertible. 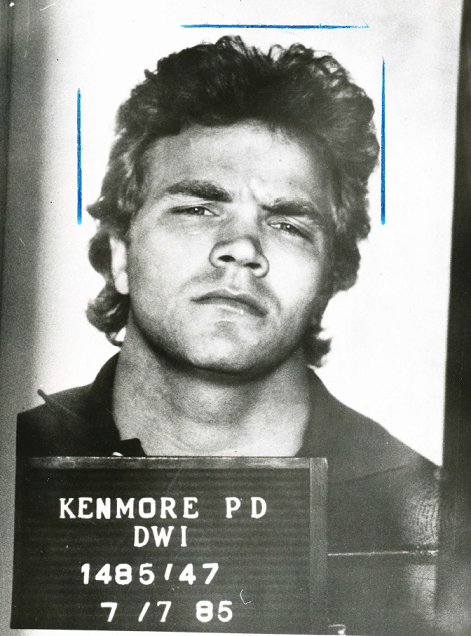 At 6:40 p.m.,  Walentynowicz entered the empty White Arrow Sunoco Station where an unsuspecting Jeri Marcinkowski was working the register. As he approached the counter with his sawed-off shotgun, prepared to rob the small gas station to help fund his escape, another customer pulled into the lot.

Panicked by the arrival of a potential witness to his crime, Walentynowicz immediately shot the young clerk as she turned around; the bullet lodged in her ribs. He then fired a shot at the customer in the parking lot, before jumping back into his car and driving off down Southwestern Boulevard.

Marcinkowski was transported to ECMC, where she died from her injuries just one hour later.

Luckily for police, the customer in the parking lot escaped unscathed, and was able to provide investigators with descriptions of both Walentynowicz and his distinct vehicle.

Fred Walentynowicz discovered Curtin’s body – wedged between his living room couch and the wall – upon returning home from work on Christmas morning. He alerted authorities right away. After obtaining a photograph and description of the younger Walentynowicz's car, it it did not take long for police to conclude that David Walentynowicz had committed both murders, and a timeline of the crimes began to emerge.

By that time, however, Walentynowicz had already driven to Whitehall, Ohio, where he checked into a motel on Dec. 26, 1985.

“I knew they weren’t going to find my son alive,” Fred Walentynowicz later told The News about the authorities’ pursuit of his son.

On the morning on Dec. 27, 1985, the motel’s manager found David Walentynowicz lying face-down in a pool of blood on his motel room floor. He had shot himself in the face with the same shotgun he had used to kill Marcinkowski. David left no suicide note, but one of the only items found with his body was a ring inside a jewelry box, likely the same ring he had promised to return to Curtin on Christmas Eve. The shotgun blast rendered Walentynowicz’s face unrecognizable, but his fingerprints matched the ones on file at the Kenmore Police Department, obtained during a DWI arrest the previous summer. Ballistics tests later confirmed that the shotgun Walentynowicz used to kill himself was indeed the same one used in the senseless slaying of Marcinkowski, leaving no doubt about Walentynowicz’s guilt in the crime, according to News reports from Dec. 28, 1985.

At the end of all the carnage, Fred Walentynowicz largely blamed himself.

“If anything, I want people to know that maybe as parents, when they see signs (of trouble) in their children, they should get help,” Fred Walentynowicz lamented to The News on Jan. 12, 1986, regretting having not intervened when he saw signs of violence and obsession in his son.

“We as a family are truly sorry for the Curtin family and the Marcinkowski family for what our son did to those girls,” Fred Walentynowicz said. “We offer our deepest blessings and prayers for those families. We can only ask God to forgive my son and forgive us.” 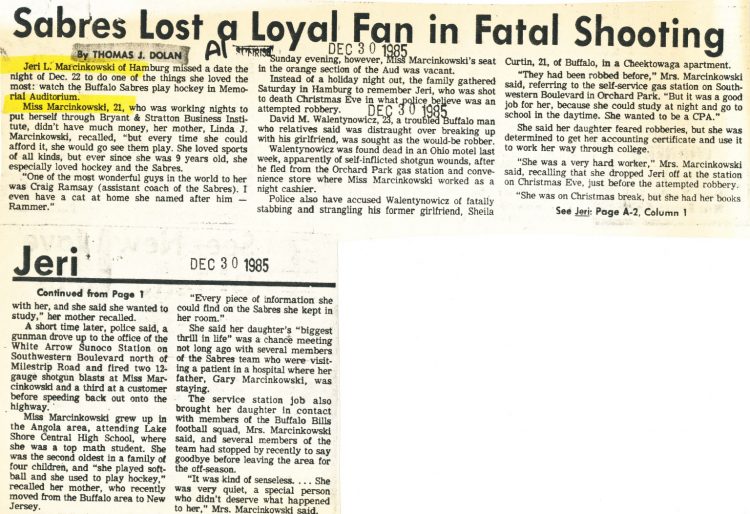