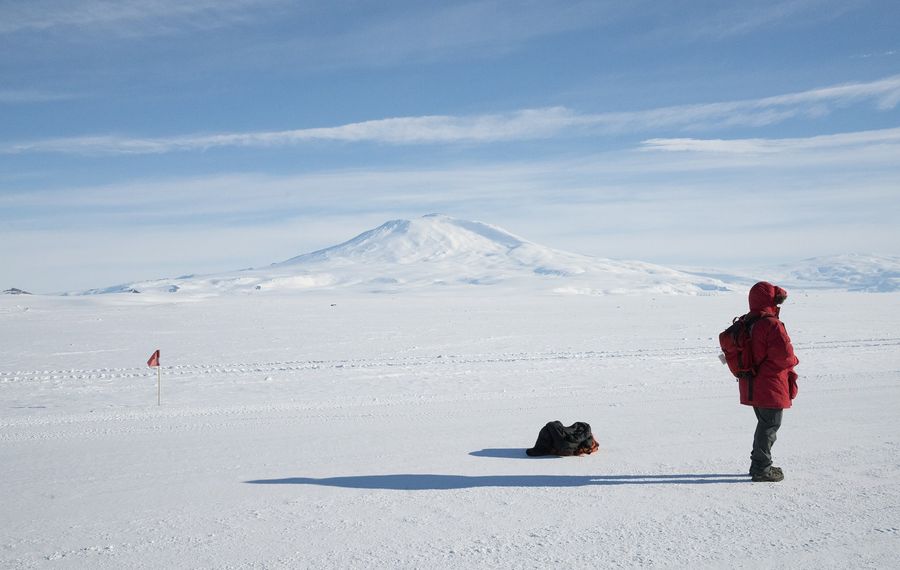 No sooner had "South Pole Station" gone on sale early this summer than real-life scientists announced a trillion-ton iceberg had broken off an Antarctic ice shelf and is floating around the Weddell Sea.

An ice shelf is thousands of square miles of floating ice. The newly split-off berg itself covers 2,200 square miles, takes up twice the volume of Lake Erie and is about half the size of a berg that broke off in 2000.

The news comes just in time to stir the latent interest in Antarctica so many of us share -- like the lure of Siberia -- where the winters and even the summers are colder than ours in Western New York.

For half of every year, no aircraft can fly in or out without risking personal danger and frighteningly enough, fuel turning to some kind of jellylike mess. The kitchen contends with the tendency of fresh foods to go bad after the first month of isolation; recipes must be adjusted for the altitude. Machinery keeps the staff from freezing to death and the scientists conducting research there know their well-being depends on the technical and maintenance staff know-how.

Who in their right mind would volunteer, then, for the National Science Foundation's Antarctic Artists and Writers Program at South Pole? Ashley Shelby makes clear from the start that her protagonist, Cooper Gosling, and everyone else choosing Antarctic duty at the Amundsen-Scott South Pole Station undergoes psychological testing. The tests are conducted, of course, by a truly loopy shrink. Her endearing qualities reveal themselves as the story progresses. 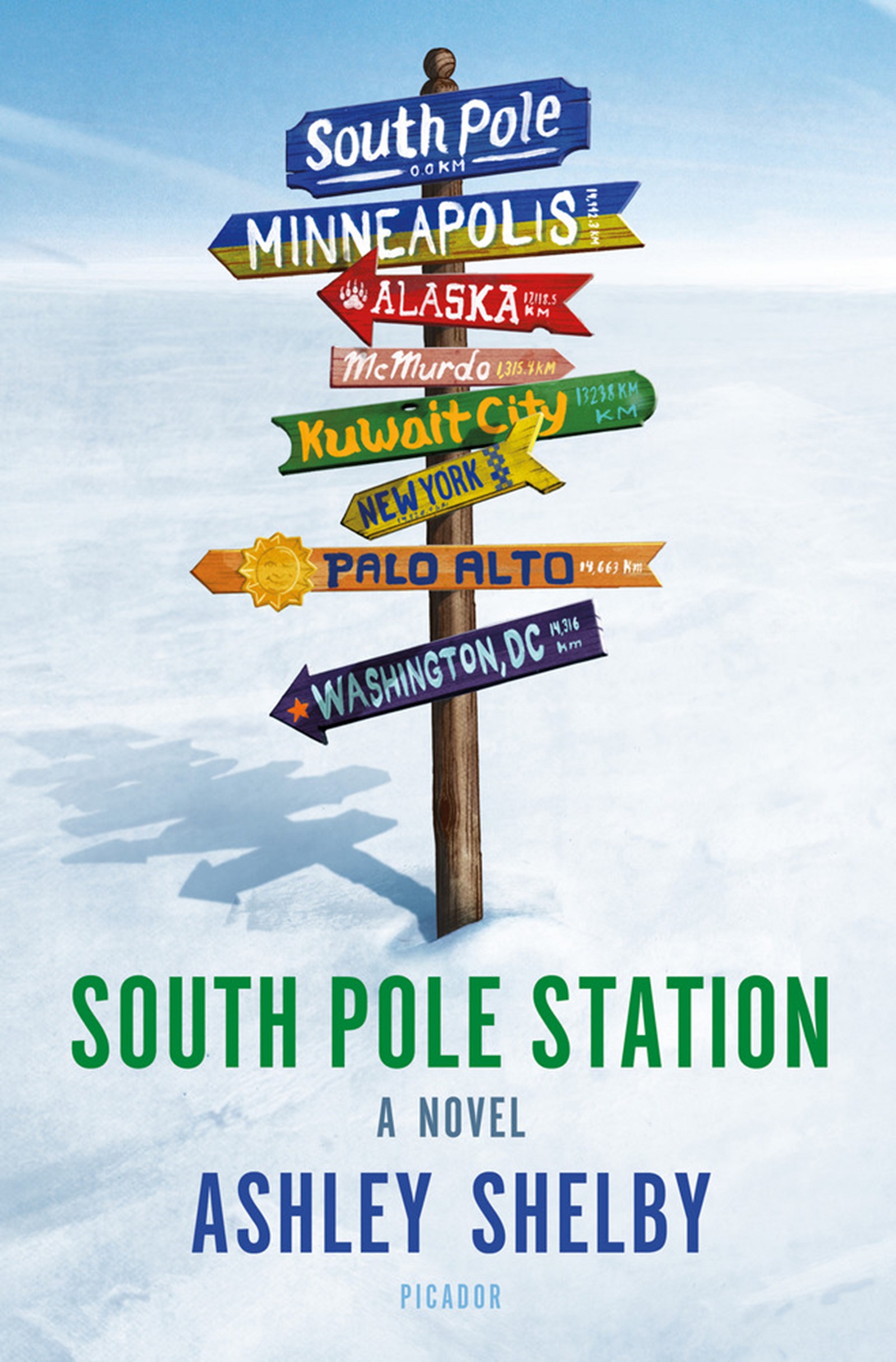 Cooper joins an interpretive dancer and a historical novelist in the art/literature section. Once at the Amundsen-Scott South Pole Station, she produces picture after picture of what she sees there: whiteness. When she exhausts the creative possibilities of snow, ice and the white sky, she starts painting mittens. Lots of mittens. Along this journey of self-discovery, she meets as daffy a set of characters as can be imagined without descending  into farce.

Cooper, trying to regain her balance after her twin brother's suicide, stays out of the scientists-vs.-gearhead games. Paperwork skullduggery lists her as the technical assistant of the station's pariah, a climate-change-denying physicist who may or may not be a shill for Big Oil and the politicians thereto connected. This bending of the federal rules gives Shelby the chance take the characters, historical research and plot she has so precisely created and blow it all to bits. Well, actually, she makes Cooper lose her right index finger, twisted off by a defective ice drill.

The incident makes Cooper the poster child for various sides in the climate-change wars raging through the scientific world, at least as portrayed here. Why was the substandard drill fobbed off onto the non-conforming scientist?

Shelby's work at Penguin as an editor, her master's degree, and her awards for a non-fiction book and for the short story that grew into "South Pole Station" all add to the polish of this first novel.  A resident of Minnesota, Shelby knows about cold weather. She added her sister's experiences at the South Pole in assembling this trip into mad science, politics gone berserk, class resentment and what happens when rival groups spend half the year isolated in a below-zero wilderness.

Isolated means no planes can go in or out. For six months. When Cooper's finger is torn off, she has to cope as best she can to function at all, let alone fulfill her government contract.

The unrelenting isolation with the few hardliners who volunteer to stay for the winter -- no planes in, no planes out -- forces her into contemplation of herself and of her relationships with her new friends, the odd group of scientists and technicians. The devastation triggered by her brother's suicide adds a dark note to otherwise reasonable developments.

And an odd group they are, at each others' throats over climate change: is it caused by sun cycles or by people? Of the atheists and fundamentalists always undercutting each other, some are lost in clouds of cosmic abstraction; others as petty as the helper who sabotages the station cook by tearing pages out of her cookbooks, until only the usurper has any recipes left. Others are still trying to impress their fathers.

Shelby catches the ironies and ludicrous trivia that can balloon out of control. Dire consequences in ludicrous circumstances let us laugh anyway. She captures nuances with a phrase, a situation, someone's appearance. Cooper Gosling's fellow aspirants for potential assignment to the South Pole are all men, "all self-consciously hirsute" and marginally attractive.

An office park looks like a centerfold from "Maximum Security Prisons Quarterly." No, I did not look it up. Maybe there is such a journal, maybe not. She keeps the only boring stretches in "South Pole Station" short and deliberate. These are the "science" parts. Shelby has mastered the pompous banality of self-important academics on the podium and in memos.

During one lecture, she puts us through the same ordeal that her characters are enduring: the endless irrelevance of a lecturer's project.

In charge of it all, the South Pole Station's chief, Tucker Bollinger, reminds Cooper that one person's tendency to hole up in her room with Proust is another person's schizoid isolation. Bollinger's mix of bluster and vulnerability keeps his development interesting. When Cooper tells him she has worked as a "performance artist" at wedding receptions where the brides carried kale, he takes it in stride.

Shelby gives secondary characters enough individuality to bring them out of the background from time to time. Even Cooper's mother, definitely a background denizen, has an interesting job. She works for a publisher that provides the literary world with such delights as "The Visigoth Manager: Germanic Paganism in the Workplace."

When two hungry hikers appear at the base, the rules forbid feeding them, since they are not American citizens, and the rules, etc., etc.  Of course, the crew finds ways to smuggle food to them, which comes in handy when the hikers befriend Russians and bring back supplies when the disaffected Americans hold the station hostage.

Anything can happen, and most of it does in this remnant of the Old West mentality. Nice work, especially for a first novel, and especially as readers evaluate the latest real-life news from the ends of the earth.

Stephanie Shapiro is a former News reporter and editor.